Building on efficiencies from smart real estate and facility management

Ever detail- and outcome-oriented, Paul Donhauser considers himself the Bill Belichick of corporate real estate management, although he may be more charismatic than the New England Patriots’ famously taciturn coach. He’s also much less secretive about his game plan.

Donhauser might even like to see other companies, including competitors, borrowing from the winning strategy he has implemented as vice president in charge of Boston Scientific’s 9 million square feet of worldwide facilities. He calls his way of maximizing their use the Global Facilities Master Plan, the Xs and Os being: Prune, Invest, Sustain and Maintain. 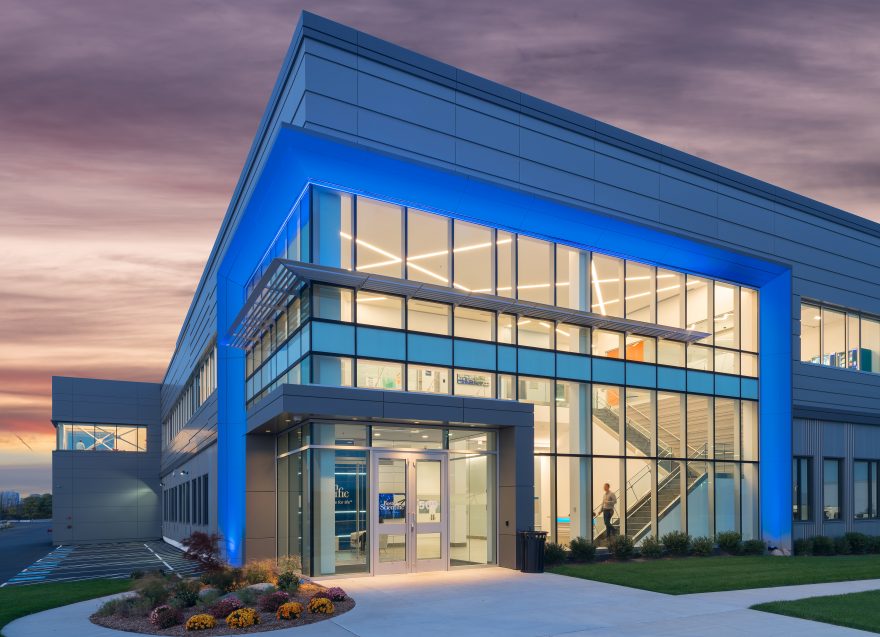 First of all, Donhauser explains, that means the divesting of properties that no longer enable the overall mission. Then investing the proceeds into the remaining strategic facilities and keeping them aligned to the company’s core values through design guidelines that, while international in scope, are not cookie-cutter.

In January, Donhauser had all those processes in motion at three sites in Ireland, where core manufacturing facilities were being retooled in Galway, Clonmel and Cork. Come spring, he expects to be touching down on the Emerald Isle for a first-hand look at the works in progress, and then passing on to Japan, Singapore, Hong Kong and Malaysia later in the year to see, respectively, new regional hubs and a factory, each of which came in under budget and within schedule.

And there was work aplenty going on closer to home, including a new regional hub in San Jose, California, and projects planned in Latin America. As Donhauser explains, “We’re constantly turning over our real estate portfolio, always looking to optimize it.”

He’s just the man to do it, and says other companies would be wise to follow the Boston Scientific model.

“My peers are struggling because they can’t get their functions consolidated, structured correctly and with the correct reporting lines,” Donhauser tells Blueprint during a lengthy interview from what might be the prime exhibit of his mix of real estate and technological acumen. That’s Boston Scientific’s LEED Gold-certified headquarters in Marlborough, Massachusetts, loaded with just about every kind of energy-saver and employee amenity that a progressive company would need to recruit and retain talent. 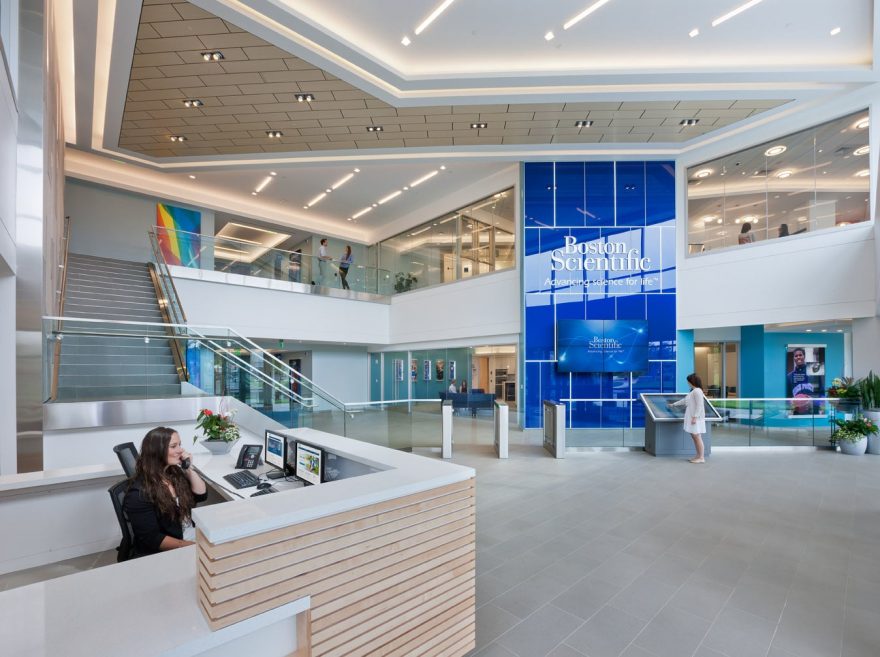 “People in my line of work are being told to cut costs, but given no strategy for the bigger picture,” he says. “You can’t just save money; you’ve got to invest it.”

The new headquarters opened in 2014 after what seemed a high-stakes juggling act that Donhauser performed with Boston Scientific’s other Massachusetts facilities in Quincy and Natick, the latter of which used to be the main base.

That Natick complex was about 80 percent private offices and 20 percent open space, and Donhauser deemed it prudent to essentially reverse the numbers, but to do so in Marlborough, where Boston Scientific had an 850,000-square-foot, four-building campus on 20 acres. So Natick was sold for $55 million, as was part of Quincy for $31 million, resulting in a reduction of $2 million in operating expenses and another $1 million in utility rebates stemming from key upgrades and a LEED certification.

His attention on Marlborough, Donhauser arranged to sell 800,000 square feet at a further savings of $8 million, that enabled an extensive retrofit with the help of Margulies Perruzzi Architects of Boston. And this would be the headquarters for an exciting new era.

Myriad factors contribute to corporate culture, advises Donhauser who,  at 44, falls between two crucial demographics—the young folks who figure so prominently in any company’s future and the mid- and late-career types whose experience is just as important. They both relish such perks as a corporate fitness center, CrossFit, child care, drycleaner, desirable cafeteria and ample square footage for informal collaboration.

“Our job is to understand and customize the user experience and make sure their output is maximized,” he says. “High-tech, natural light, transit options—we bring all that into our investment strategy, review it annually and tweak it for next year.”

Not surprisingly, Donhauser says the Marlborough headquarters remains a work in progress with the same holding true for pretty much all Boston Scientific facilities. He wants the company to be in the forefront of the sustainable building movement, and has a plan in effect for it to be carbon neutral by 2030, as well as further incentives for employee attraction and retention. On his watch, nine Boston Scientific facilities have earned LEED certification, and he’s aiming for more.

Worldwide, he’s got eight people directly reporting to him on the status of corporate facilities, real estate and workplace strategy. About 25 projects are underway, with all seven business units growing, and  China and the Asia-Pacific area tabbed as the most active. 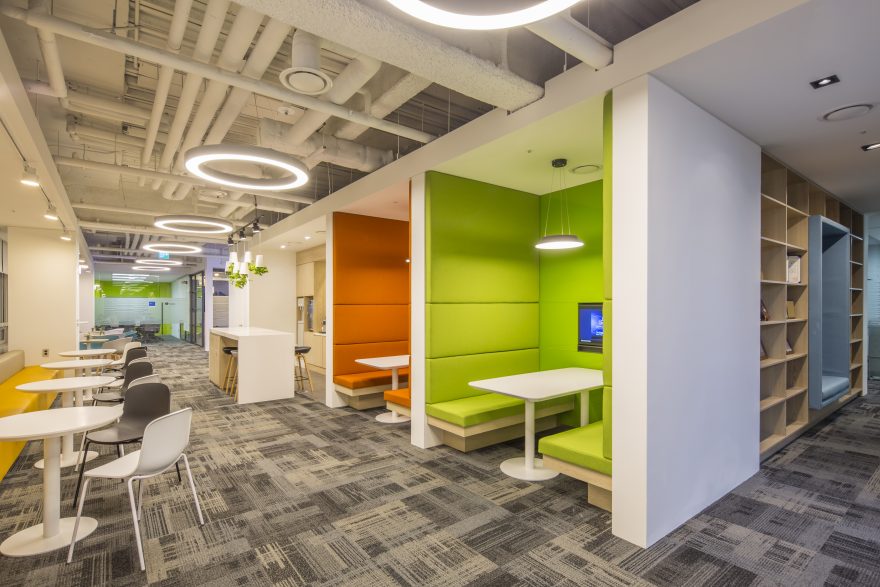 It sure helps to be well-versed in all ends of the operation, says Donhauser, who credits his Massachusetts Maritime Academy education and discipline, as well as time spent with his father, a lifetime facility maintenance person and a former painter, whose keen eye often identified other matters of concern while working at Beverly Hospital on Massachusetts’ North Shore.

“A lot of my peers in real estate understand just that, real estate,” says Donhauser, who augmented an earlier degree in engineering with one in facilities management. “But they don’t understand the technological aspects. When you do a walk-through in one of our facilities, you’d better understand what makes it tick. When the owner commits to spending $100 million in construction, it helps to know how efficiently that money will be spent.”

Hence the value of Donhauser’s engineering background, the early part coming from being aboard ships as a Mass. Maritime student, then working on tugboats and for Thielsch Engineering, leading technicians up and down the Mississippi River, inspecting and repairing critical systems for paper mills and power plants. Stints as a project manager at William A. Berry & Son Inc. and Sebesta Blomberg followed, and then three years as senior plant and energy engineering manager at Eaton Corp/Axcelis, outside Boston.

Donhauser came to Boston Scientific in April 2004, and the past 14 years easily mark the longest stretch of his career, and one that’s likely to continue, given the challenging work and the satisfaction of seeing it progress.

And the ever-expanding opportunities to apply lessons learned as a boy.

“I remember being 7 or 8 and accompanying my dad to Beverly Hospital and hearing him bemoan the shortcomings of management,” Donhauser recalls. “They’ve got to be more proactive, plan fully and stop wasting money, he’d say. It all kind of osmosified in my head.”

Years later found Donhauser as an apprentice plumber and enjoying the work, only to have his boss tell him he was too smart to simply install and unclog pipes. Go to college, the would-be plumber was advised.

Donhauser did, and to a school with a regimented approach that doesn’t take excuses. The plumbing background helped, as did the painting and everything else the mechanically-minded young man had done, and never considers himself above doing.

Kind of like another man who’s risen to the top of his profession by mastering and building upon the small things.

“Like Belichick, I’ve been the offensive and defensive coordinator, the special teams coach, the wide receiver coach,” Donhauser says. “All those roles have helped make me head coach of my department.” 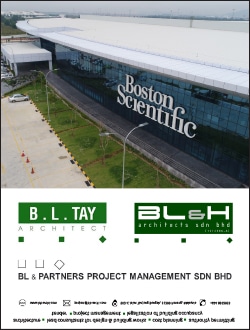 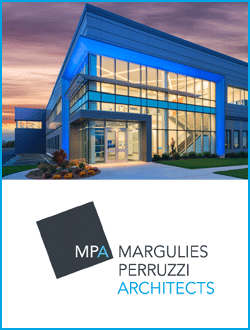 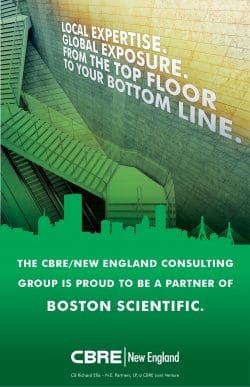