Good buildings change with the speed of science

Successful buildings must have both form and function.

In 1968, architect Benjamin Thompson built the Bronfman Science Center at Williams College in Williamstown, Massachusetts. The building certainly had form for that era. Used as a teaching point by art history professors, Bronfman exemplified how a modern building could be compatible with older architectural styles; its flat roof and brick and concrete façade giving it a modest appearance among older, statelier buildings.

“Bronfman sort of knew its place, and it took that place very nicely and very quietly at the end of the quad,” says Rita Coppola-Wallace, Williams College’s executive director of design and construction. 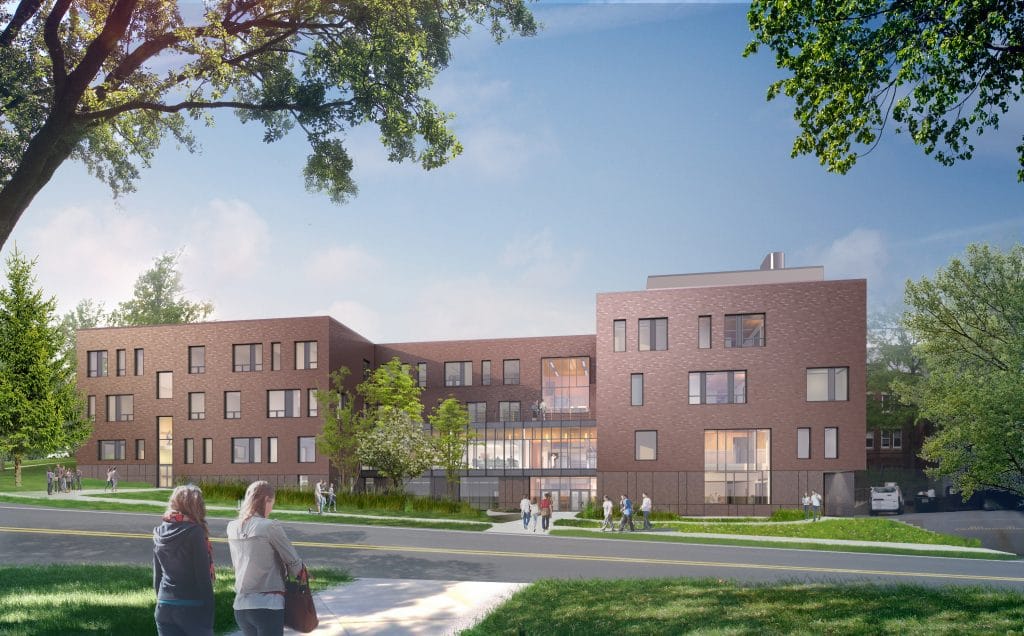 “It was also novel in that era for its incorporation of student-faculty laboratory facilities into the building design.”

But after almost 50 years, Bronfman lacked function. It didn’t have the space, flexibility or laboratory facilities to handle students’ increased interest in the sciences and the increased scope and complexity of faculty research programs.

So, Williams College embarked on a $204-million project—the largest in the school’s history—to demolish Bronfman, build a new building in its place, and to build another 78,000-square-foot science building nearby.

“These two additions to the Unified Science Center are going to push the sciences hugely into the future,” Coppola-Wallace says. “I can’t impress how important that is for any curriculum, certainly for the sciences.”

To renovate or rebuild

In the last decade, Williams College has seen its students’ interest in the sciences grow exponentially. More than half of the student body now studies some form of science as either a major or part of a double major, Coppola-Wallace says.

“The current spaces are just inadequate, both in programing, circulation and capacity size,” she explains. That was especially true for Bronfman.

In 2013, Williams College hired Payette, a Boston-based architecture firm to assess the facility for its condition and use in terms of space and college programs. For the better part of two years, Payette analyzed Bronfman and another legacy science building, Clark Hall. Payette met with faculty, asking their needs “for today, for tomorrow, for the future.” 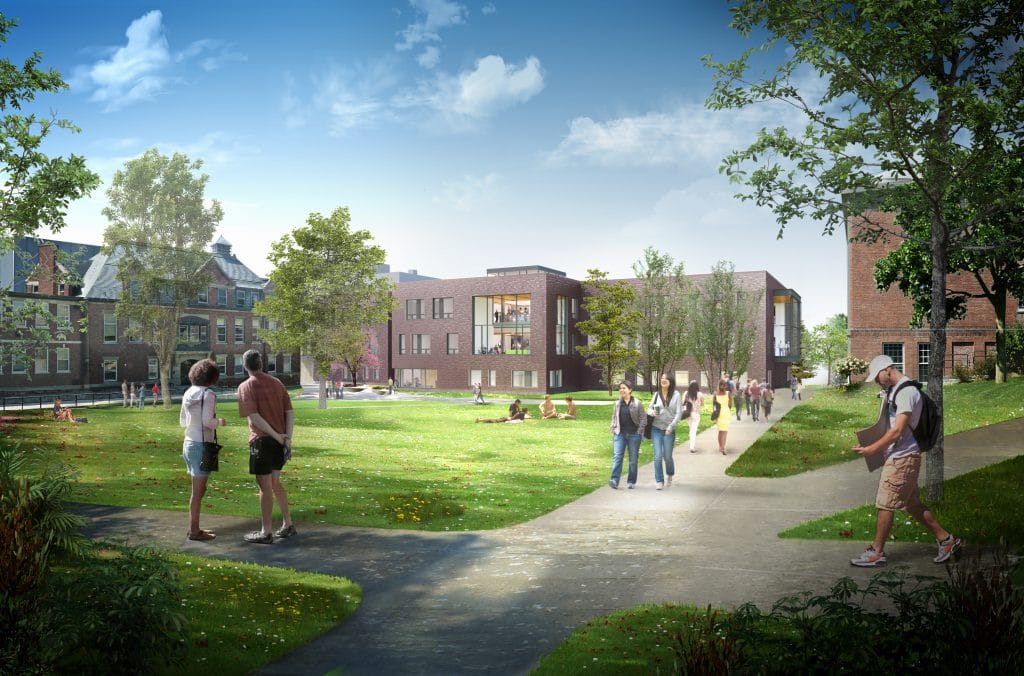 The findings were unambiguous. Bronfman simply didn’t have enough space to accommodate future growth in the sciences. While Williams College did consider renovating Bronfman, the building was constructed with shear walls, which could not be moved, and it had “a fair amount of hazardous materials,” including likely carcinogenic PCBs (polychlorinated biphenyls) and asbestos.

“In the end, you renovate a building that was built in the ‘60s, and you’ve still got a ‘60s building,” Coppola-Wallace says.

Underway now is The South Building, just south of the college’s current Unified Science Center. That 78,000-square-foot structure will primarily house wet labs for student-faculty research in physics, chemistry and biology, as well as faculty offices and associated student spaces.

Just as The South Building is being completed in the summer of 2018, Williams College will tear down all 90,000-square-feet of Bronfman. In its place, it will construct The North Building, a 105,000-square-foot facility located just north of the Unified Science Center. The North Building will house classrooms, laboratory spaces for psychology and geosciences, as well as offices and student spaces for math, psychology and geoscience disciplines.

The North Building is slated for completion in 2020, and both buildings are striving for LEED Gold Certification.

Planning a $204-million construction project in the middle of an active campus presents logistical challenges. But that’s only part of the equation.

“To remove an iconic building like Bronfman is a challenge,” Coppola-Wallace says. 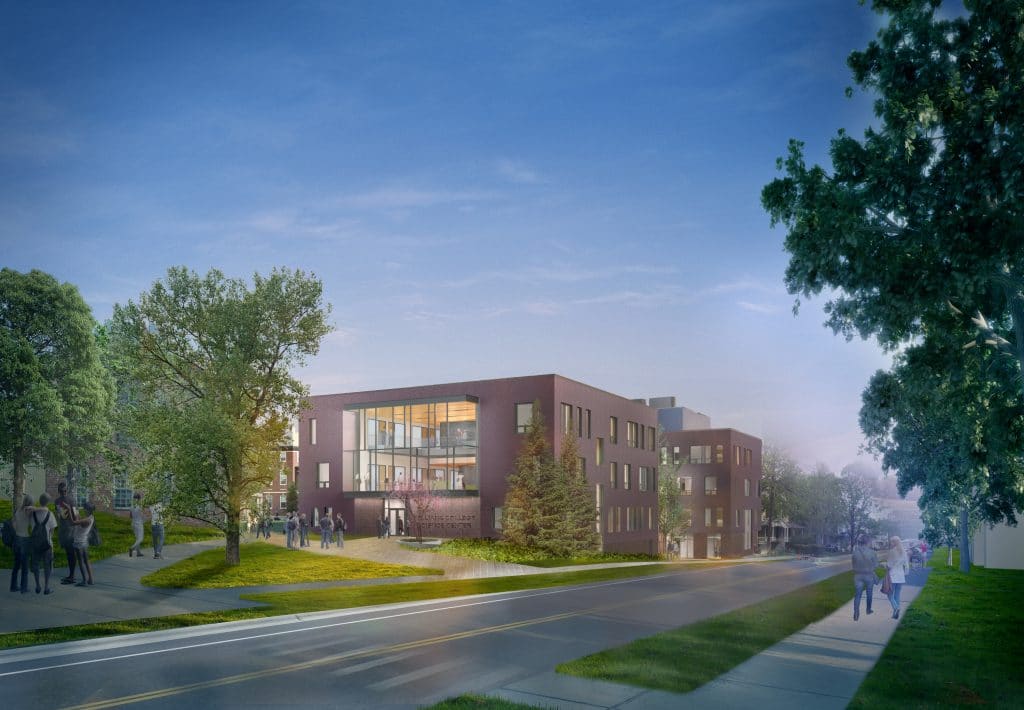 The Williams College community had grown to love the building; its form fit well in the science quad, where it sat humbly beneath larger, “more grandfatherly” buildings. In fact, when Payette presented an initial design concept, it couldn’t find support.

“No matter which way we turned with this initial design, it just wasn’t working,” Coppola-Wallace says. “Nobody was embracing it. Very few people even liked it. Everybody just kept saying, ‘Why can’t you have a flat-roof building, a brick building?’ Literally, ‘why can’t you just make it look like Bronfman?’”

So, Payette went back to the drawing board and presented an alternative—a building that, like Bronfman, has a flat roof and brick façade. The team even dug deeper into the ground so that The North Building will be about the same height as Bronfman but offer an additional 15,000 square feet.

“It has been a process, it’s still a process, to convince people that indeed we can do very similar things with the new North Building that were done with Bronfman and it can be a very quiet building and it can fit in the quad; that was a big concern,” Coppola-Wallace says.

A foundation for success

Coppola-Wallace is confident the new buildings will deliver the highest level of form and function. That’s largely thanks to the level of planning that’s been done and the project team, which included the architect, construction managers, internal project managers and design review committee, faculty, students and staff, Coppola-Wallace says, adding that the support from senior administration and the board of trustees has been “unbelievable.”

“When you build a road, the longevity of that road is determined on the sub-base and how good the sub-base is,” Coppola-Wallace says, drawing an analogy. “Well, the design and construction of a project is somewhat similar. It’s based on the planning that you do ahead of time and that’s sort of your sub-base to your road.”

Payette spent more than two years on the initial planning phases, during which it met with every single faculty member more than once to determine faculty needs and how they envisioned their space to grow over time.

When the plans were ready, Williams College decided to use the Construction Manager at Risk (CMAR) delivery method, which includes a commitment from the construction manager to deliver a project within a guaranteed maximum price (GMP). The college invited five firms to campus for an informational meet and greet. It then requested proposals from each and went through extensive negotiations with the finalists.

“It’s not that we didn’t feel confident they could do that, but we sort of had a different way of approaching things,” she says. “We wanted this whole new team … . [Otherwise] we saw there would be potential weaknesses and risks for the college.”

Perhaps most importantly, the two buildings aren’t just being built to accommodate the sciences needs in 2018 and 2020.

“Obviously, science is one of those things that doesn’t really remain static for too long,” Coppola-Wallace says.

Both The South Building and The North Building are designed with flex labs and flex offices—spaces that can be physically expanded to accommodate future growth. While they may live in Bronfman’s shadow, they won’t follow in its footsteps.

“I think if we told the college we were keeping Bronfman, they’d be excited,” Coppola-Wallace says.

She’s eager, though, to watch their faces light up when they see their new office, lab or classroom and find their designs, wishes and desires communicated in the final product. 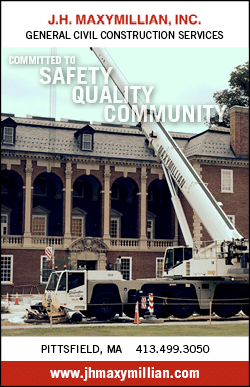 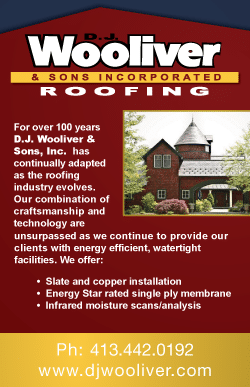