Like many states, Maine has seen a spike in demand for behavioral health resources over the past decade. The problem is especially pronounced in rural and low-income areas, where extenuating factors—such as the state’s growing opioid crisis—are pushing these services to the brink.

It’s an issue Wes Pooler knows all too well. During his tenure as director of facilities management for Franklin Memorial Hospital in Farmington, Pooler remembers the facility having to transport patients 4 ½ hours north, to the Canadian border town of Fort Kent, where the only available behavioral health bed happened to be on that day. 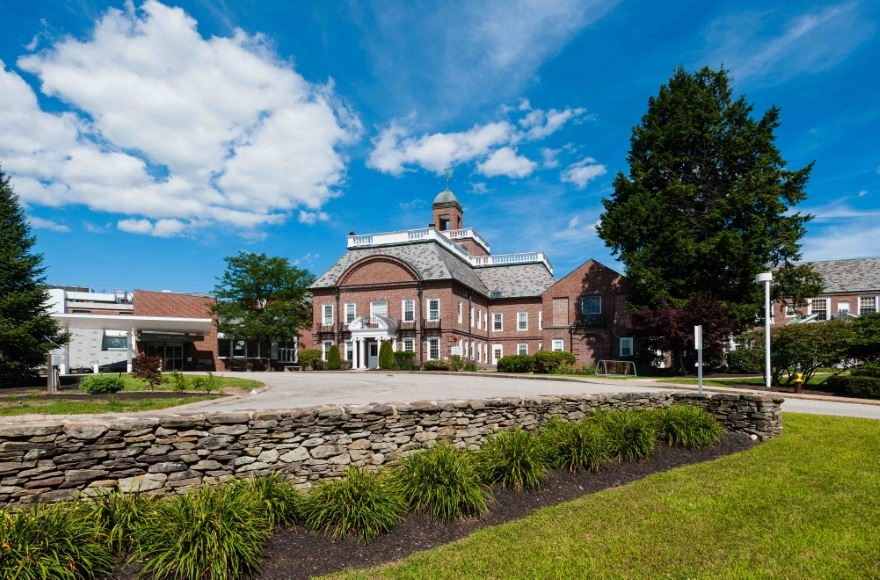 Now, as vice president of support services for Southern Maine Health Care (SMHC), Pooler is working to close that gap—and usher in a new era of behavioral health treatment for the region.

“When Goodall Hospital in Sanford merged with Southern Maine Medical Center to create SMHC a few years ago, one of the hard choices that had to be made was to close the inpatient services facility in Sanford,” explains Pooler, who joined the organization last November. “With this project, we’re bringing inpatient care back to Sanford.”

The project in question is a two-story, 26,000-square-foot renovation to Sanford’s Goodall Hospital, a stately brick complex built in 1928. After finalizing the concept designs in July, the first task for Pooler and his team was to redesign the hospital’s former inpatient medical, surgical and OB units.

Slated to open in July of 2020, the 40-bed Behavioral Health Center will feature a number of modern amenities and design concepts. According to Pooler, the ground floor will include five private assessment rooms in the Emergency Department, a patient lounge with a television, along with storage, staff offices and clinical resources.

Upstairs, the inpatient rooms—each containing two beds—will occupy two corridors on the first floor, which is configured like a horseshoe. In the center core, separating the two patient corridors, patients can access a laundry room and a calming room.

The first floor’s north wing will include a dining room, a multipurpose room, quiet spaces, group therapy rooms and a large outdoor terrace. The second floor reflects a similar configuration.

“Sometimes patients want to socialize with their peers or get some fresh air, and other times they want to be alone, so we designed a space that gives them both,” Pooler says. “Our goal is to create a place that’s comfortable, calming and inviting.”

In conceptualizing the addition, SMHC staff pursued what Pooler calls an “onstage, offstage model” (sometimes known as the Disney model). Simply put, whenever a doctor or nurse is in an area where patients are visible or might be present, they’re considered “onstage”—which, given the centralized location of staff stations, is most of the floor. There are also “offstage” areas to ensure the staff has an area where they can decompress, and also giving them access to supplies without entering the patient area, thereby safeguarding patient privacy.

The space will hardly feel institutional, however. For flooring, the team chose a mix of sheet goods, with both a wood grain pattern and more abstract neutrals to create an earthy, inviting feel. Throughout the facility, art glass infused with natural materials will be used in the interior windows to provide a unique feel to the space and bring nature inside the building.

In addition, some of the unit’s common rooms will feature wall-sized murals of Maine’s rocky coast. And while white figures to be the dominant color, bright pastels—greens and blues, especially—will highlight the facility’s columns and partitions.

“A lot of behavioral health facilities, while safe, tend to be sterile and overly bright,” Pooler says. “We want a space that’s comfortable and calming.”

But for all its impressive bells and whistles, Pooler says the unit’s greatest attribute isn’t any one room or resource, but the collaboration between SMHC and Maine Behavioral Health (MBH). Bringing together professionals from across the MaineHealth system, the project represents what Pooler calls a “high-wire act of resources and workflow.”

With MBH, the organization has the skills necessary to create a space that puts patient wellbeing first. SMHC received expertise from Maine Medical Center, including a seasoned project manager.

“The whole goal is to leverage collaboration to provide better services for our community and our patients—that’s what it’s all about,” Pooler says. “In the past, community hospitals had only their internal talent and resources to manage large projects. Today, health care systems have far more resources available, and when the various teams from across a system work together, the outcome can be fantastic. This project is a testament to that idea of collaboration. It embodies the kind of unity that Maine is known for.”