A restaurant vintage all its own

As you walk inside, the first thing you see is the palatial collection of wine bottles, whites and reds, set within shelves that nearly reach the 16-foot ceiling. Adjacent display stands showcase decanters, aerators, stoppers and other wine accoutrements.

At the Napa-style tasting table, a friendly server offers up a gamut-spanning menu of pours. Hearing her discuss the terroir, the experience becomes an evocative one; you see the fields and feel the air. Just as the plum and black cherry of the Malbec subside, another server taps you gently on the shoulder. Your table for two is ready. 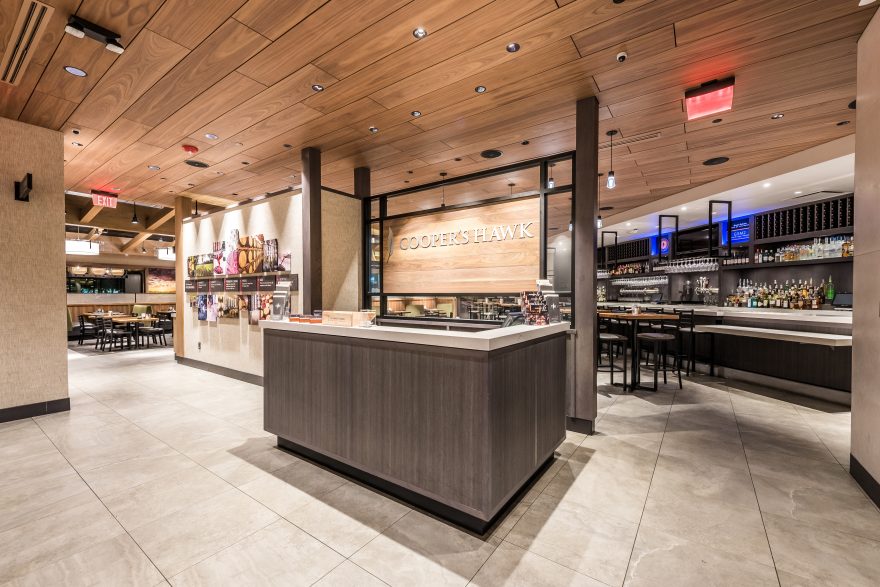 It’s unlike any restaurant you’ve experienced, and, according to Walter Fisher, that’s precisely the point.

“From the moment you step into one of our restaurants, we’re aiming for that wow factor,” says Fisher, vice president of design, construction and facilities for Cooper’s Hawk Winery and Restaurants. “At the same time, we want it to be welcoming. And I think we’ve done a good job of striking that balance.”

With 32 locations throughout the United States, and another nine waiting in the wings, the “upscale casual” Cooper’s Hawk is, by dint of definition, a restaurant chain.

It’s a term Fisher can’t help but scoff at. Having overseen all but the flagship restaurant—his work as a general contractor on the first four earned him his current title—Fisher says each Cooper’s Hawk is designed, and imagined, on its own terms. 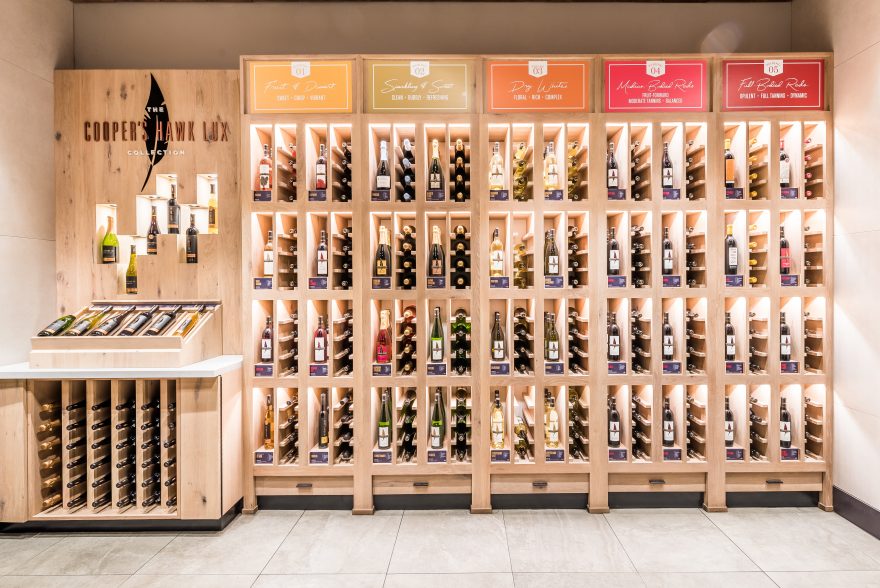 Once the company identifies a promising site, typically between 9,000 and 12,000 square feet, Fisher works closely with the design team to conceptualize the space. If the restaurant is replacing another venue, extra attention is paid to the layout of the kitchen, with an eye on making sure all of the kitchen equipment can be positioned efficiently for Cooper’s Hawk.

“We basically have three options of floor plans based on what the kitchen is and what we can fit inside,” Fisher explains. “Without a properly functioning kitchen, every part of the operation gets thrown off. So that’s one of the most important things we look at.”

To each its own

If it’s a brand new development, the process starts with a basic bubble diagram: finding the right orientation from the front door to the parking lot; drawing a rough outline of the layout, and so on. Next, the team comes up with a preliminary seating diagram.

At that point, Fisher “kicks it back into design,” which will devise a comprehensive design-development (or DD1) package, which includes floor plans, exterior elevations and other calculations. 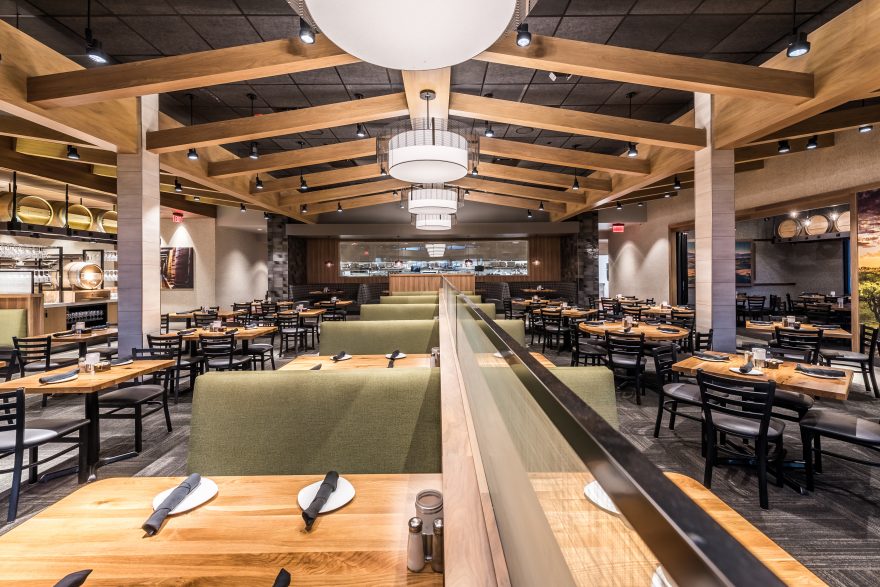 It’s in DD2 phase that the team dives into the details: colors, artwork and fabric selections, interior angles and elevations and seating chart minutiae—all with the aim of making the user experience is as comfortable and seamless as possible.

“We don’t have a specific aesthetic that we lock ourselves into, precisely because we’ve been able to work in all different styles of buildings: free-standing, in-line and everything in between,” Fisher says. “More than anything, we try and design our restaurants around our unique products and programs.”

Eat, drink and be merry

Those offerings start, unsurprisingly, with the wine itself. Located in Woodridge, Illinois, about an hour west of Chicago, the Cooper’s Hawk Winery produces upwards of 573,000 cases of wine annually, from sangrias and sweet reds to fruit wines and sparkling whites, using grapes and fruit harvested from throughout the country.

From this treasure trove, each restaurant receives their own varied allotment—hence the towering wall of bottles and the special reserve barrel that often bisects the restaurant. In some locations, tables are set within eyesight of industrial-sized barrels aging their own small-batch offerings. 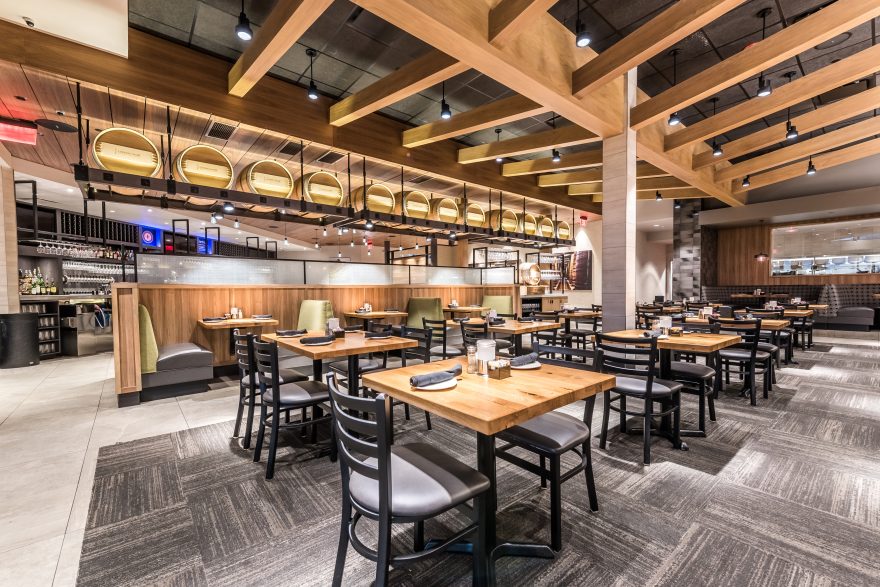 But it’s the tasting tables that remain the defining feature of Cooper’s Hawk restaurants. Seating as many as 20 patrons at a time, the stations—many of which feature high-end solid-surface countertops—offer novice tasters a chance to broaden their palates.

“The more we can make the experience about the food and wine, the more people will come back,” Fisher says. “We want people to look over from their tables and say, ‘We should do that next time.’” 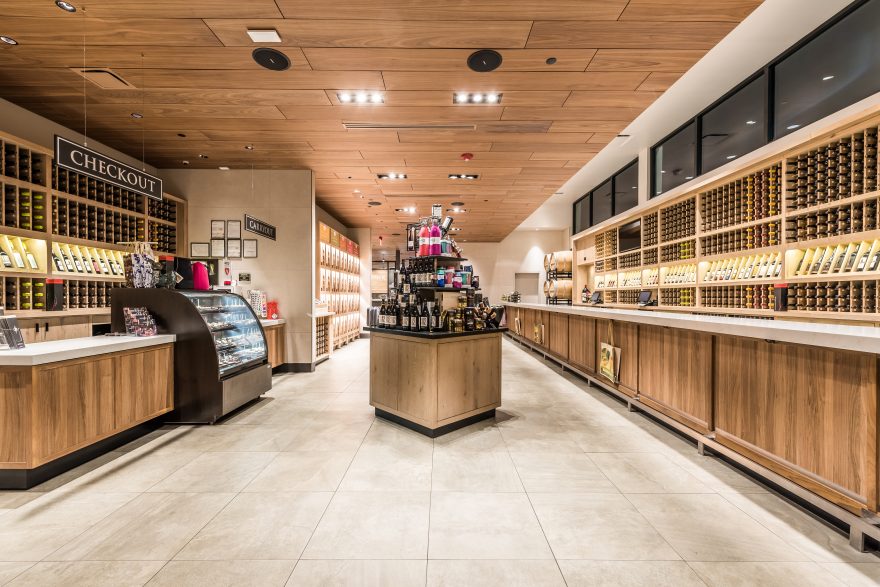 Still, the approach is hardly uniform. For instance, when remodeling a space formerly used by a different restaurant—say, a Bahama Breeze—there’s greater emphasis on revamping exteriors, incorporating more of the wood-and-metal elements typically found in Cooper’s Hawks.

Fisher says the goal is to leverage his department’s processes in a way that makes future projects scalable—a must for a company enjoying such growth.

“I think part of our appeal is that each location has a distinct vibe, while still feeling familiar,” Fisher says. “Between our own team and our contractors, we’re able to walk into just about any space and figure out how to strike that balance.” 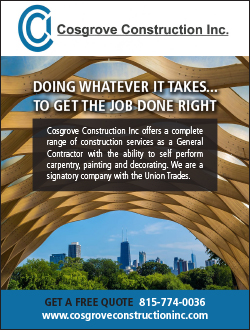 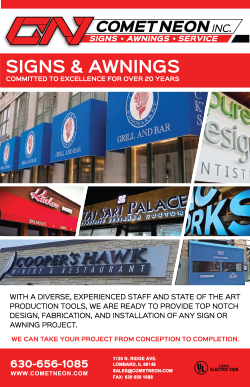