Financing and staffing during COVID-19 is tough in the healthcare business. Still, Tom Pelis is juggling both so Oswego Health’s facilities can continue several necessary construction projects, including an $8 million renovation of its surgical wings.

“Whatever the project is, the goal is always the same: delivering excellence in care,” says Pelis, Oswego Health’s director, real estate and construction. 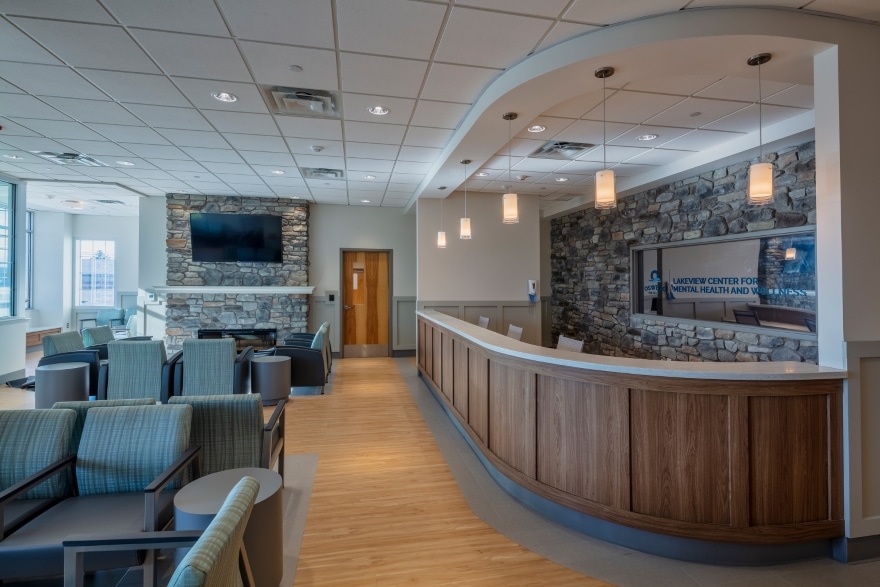 While the 140-year-old, New York-based organization isn’t as large as health care groups in nearby Rochester or Syracuse, he says that Oswego Health—named for its town—can provide modern facilities that deliver a more comfortable patient healthcare experience.

And at that, Pelis says he excels, whether taking part in a project to convert an empty 6,000-square-foot space into an outpatient orthopedic clinic in just 100 days or designing new nurse stations, all on a limited budget.

The medical surgical wing project involves a gut renovation of the inpatient rooms. The project is being completed in three phases, with the area under construction isolated from the rest of the hospital. Negative air pressure in the working space keeps any dust or contaminants from entering patient areas. According to Pelis, the entire project will be completed by the end of 2021.

“Once completed, the inpatient rooms will be primarily private and will be modern, state-of-the-art rooms,” he says.

These patient rooms will be equipped with a new HVAC filtration system, purchased through HealthWay, that will greatly improve the indoor air quality. In addition, Indigo-Clean, a new light technology, will be installed in each patient bathroom to continuously disinfect the surfaces. The technology is known to decrease pathogens by nearly 99 percent and limits hospital-acquired infections, according to Pelis. It’s the first renovation of this space since it was built in 1969. 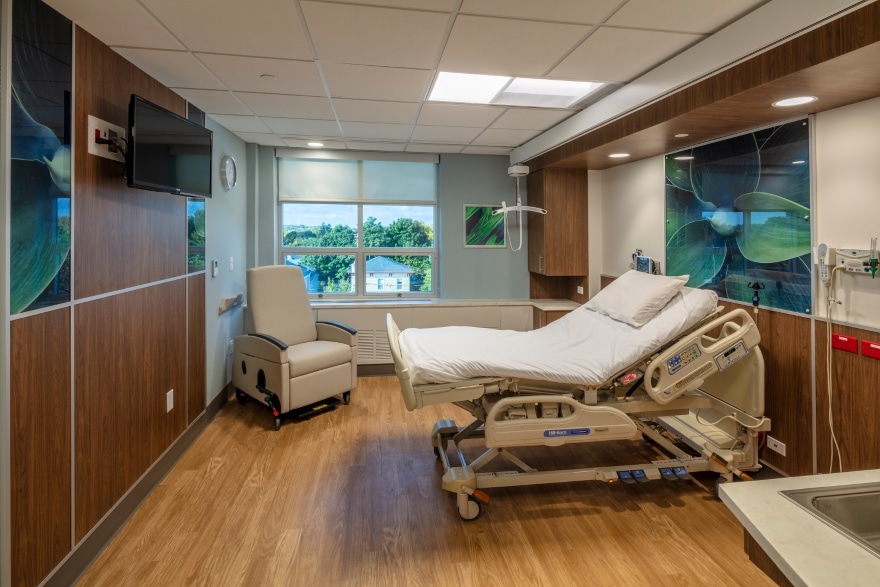 In addition, the renovated surgical wing will include a family lounge and private meditation and prayer room. There will also be a serenity room for end-of-life care which will have features more common to a home living room than a hospital room. Pelis says the bigger, more homey space will allow family members to spend longer periods of time with the patient.

“This investment in construction is integral in our plan to revolutionize health care for Oswego County,” he says. “It’s a true testament to the commitment of care we have for our community.”

At the end of January, Oswego Health completed construction of the Lakeview Center for Mental Health and Wellness, a 42,000-square-foot facility that’ll provide inpatient, outpatient and primary care services. Before being converted to a mental health facility, the building was a dormant grocery and variety store.

Pelis points out that the new building includes private consultation rooms, private and semi-private patient rooms, and group therapy rooms with their own bathrooms. Other amenities include secure outdoor spaces and a kitchen area.

The facility has 32 inpatient beds, five primary care exam rooms and 14 outpatient consultation rooms. There is also plenty of support space for staff, he says.

“The fireplace in the front lobby and photos of regional scenes that may be familiar to the inpatient population, provide an inviting and soothing atmosphere while still meeting the Office of Mental Health requirements,” Pelis explains. 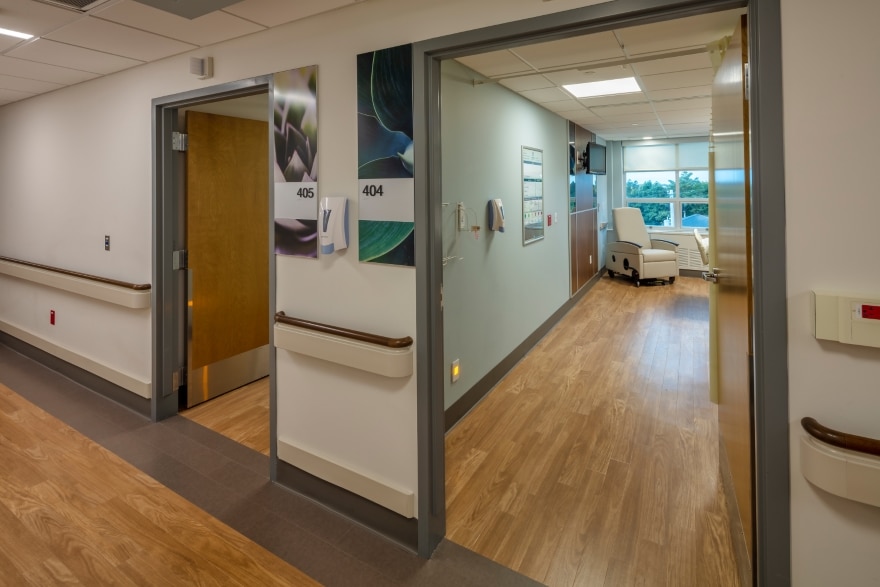 As the only inpatient mental health facility in Oswego County, Pelis adds that it was important that the new building have many of the comforts bigger facilities have.

“We want to give the best care and provide the best amenities we can,” he says.

Other work in the works

As if the new surgical wing and mental health projects aren’t enough, Pelis and his team are undertaking a master planning process to develop a comprehensive campus in nearby Fulton. The goal is to consolidate current and future services that are now spread across several buildings, into a single medical campus—it’s the same thing Oswego Health is doing for its outpatient primary care and specialty clinics.

“These programs are intended to enhance the patient experience by providing more outpatient services within a single facility,” Pelis says.

Other active projects include complete renovations to the front entrance and lobby area of the hospital, a new fluoroscopy unit in the imaging area (think: video made with X-ray), and the relocation of an existing X-ray system. 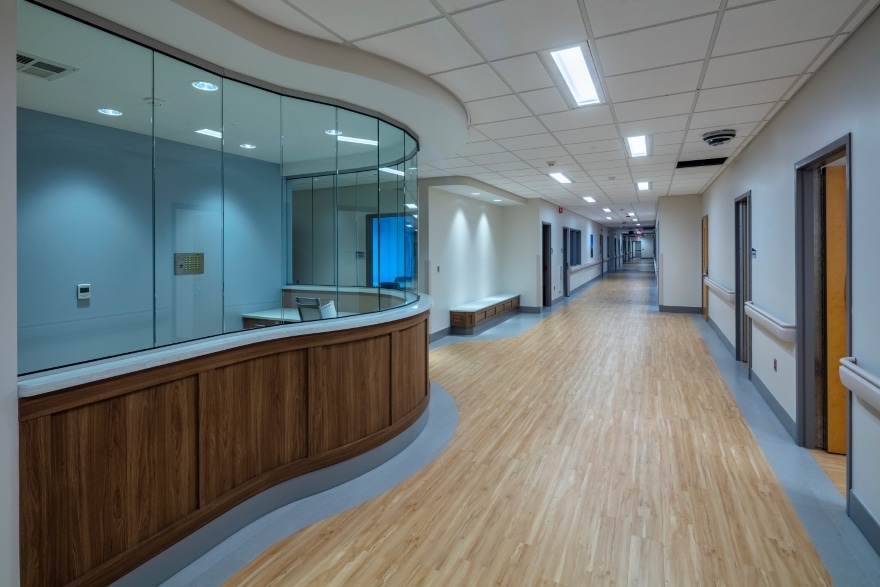 In addition, Pelis and his team are renovating a primary care clinic as well as the child and family services mental health clinic in Fulton.

In all, it’s just the kind of impact he hoped to have when he first considered a career in healthcare facilities nearly 15 years ago, after almost 30 years as a consultant, contractor and developer in other fields.

“At one point in my career, I aspired to be a doctor. However, I quickly realized in college that I have a passion for developing and providing facilities for the direct care staff,” Pelis recalls. “For me, this is my way of providing the best care possible for patients.” 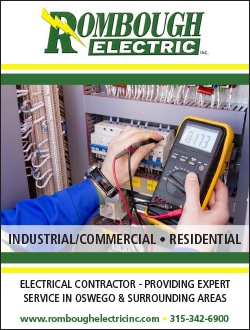