HPE designs a workplace of the future with new HQ

At Hewlett Packard Enterprise’s new headquarters, employees can have a work meeting, grab coffee at a cafe, work out and go to the pharmacy, all without leaving the building.

After two years of employees working from home because of the COVID-19 pandemic, the new building opened on February 14 in Houston, Texas. It was designed with an awareness that traditional office spaces don’t afford the same flexibility and comfort as working from home does.

“We’ve invested a ton of time over the past couple of years creating an unmatched employee experience, but the pandemic caused us to rapidly evolve,” says Tim Aimone, who led the design with a team. “We were forced to commit early to what our reimagined workplace would look like and then build it.” 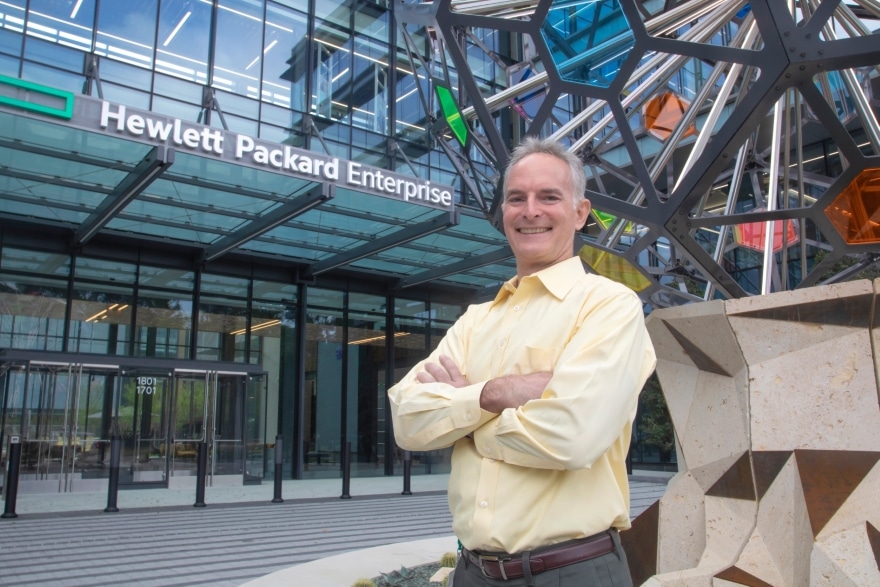 HPE is an enterprise information technology company that was founded in 2015 from the splitting of the computer hardware company Hewlett-Packard. Aimone, HPE’s director of workplace design and project management, ensured the new building had spaces for independent and collaborative work. He also ensured it had the conveniences people have come to expect, like the ability to go to the gym between meetings.

The timing of the pandemic with the new building worked with HPE’s strategy, he says, because it had already planned to move its headquarters to Houston from California. Its first building in Houston was old and kept flooding, so the company decided to build a new one.

“The design we had in the works prior to the pandemic was for a traditional office space, so we had to pivot to design a hybrid space,” Aimone says. “Our vision was to create the workplace of the future.”

HPE has always allowed employees to work from “the edge,” meaning places other than the office, including at home, a coffee shop or a library. While everyone went remote at the start of the pandemic, Aimone says 80 percent now work mostly from home.

“We had to consider, if you’re coming in, what’s the value? And the answer is collaboration and culture,” he says. 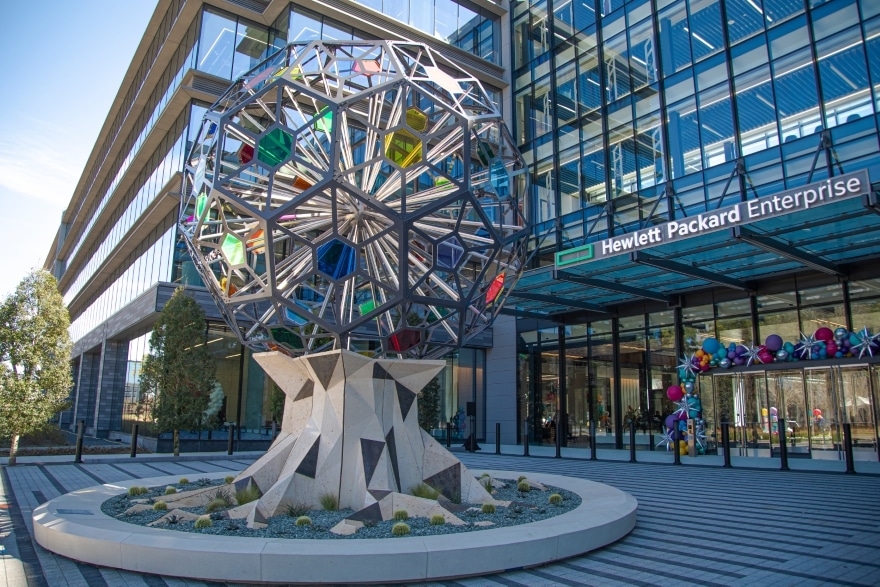 Collaborative spaces include conference rooms, “maker space” where a team or department can work on projects, and a one-acre outdoor courtyard and roof terrace designed for team members to work together.

Connect spaces, which are for social interactions, include a cafe, a basketball court, a fitness center, an “icehouse” for cooling down on hot days and break areas. Focus spaces include individual workstations as well as private booths and small rooms to make personal phone calls.

“Creating a workplace where people feel comfortable and can work well is about more than furniture and decor,” Aimone says. “You have to think about how design influences the environment and culture.”

With employees becoming more dependent on technology over the past two years, Aimone knew it needed to be incorporated throughout the design of the office.

HPE designed a mobile app called HPE Connect, which was developed by Inpixon, that allows employees to book a desk or meeting room, order lunch and request support space. The app also shows where other team members are sitting and how to navigate the building. It’s used to share local site events, company news and resources, send surveys and manage visitor access to the building, as well.

Technology, such as monitors, speakers and other tools for presenting or video conferencing, have been built into the design. Aimone says this allows teams to collaborate even if some people are in the office and others are working remotely. Another technology feature, N-Siteful, uses data from the building’s Wi-Fi access points and security access systems to track which features and areas of the building are being used. 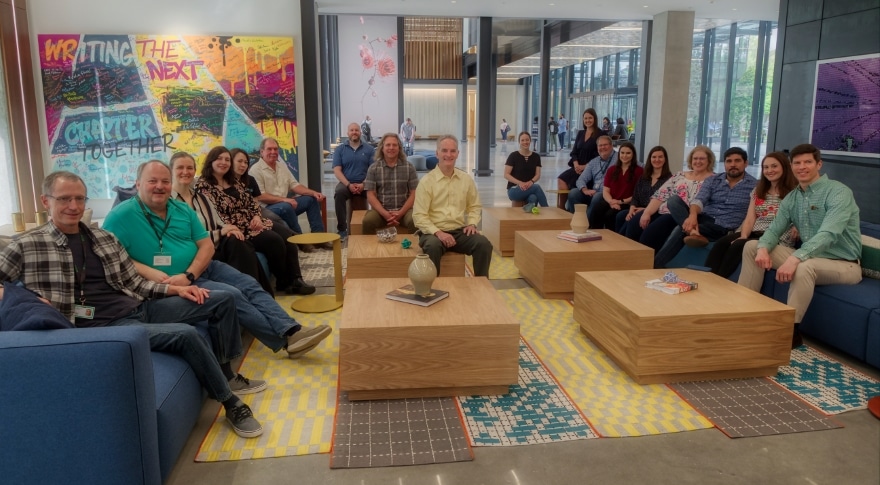 “We can see where and when employees connect and that data is analyzed to see what types of spaces are used most,” Aimone says.

This information may influence the future of the building, which was designed with moveable walls. If, for example, private workstations aren’t used too often, the spaces could be converted into collaboration space.

“The pandemic has shown us that nothing is certain,” Aimone says. “We didn’t want to lock ourselves into this design because you never know how people’s needs will change.”

Aimone has been with the company for over 30 years, having started when it was Compaq, the parent company of Hewlett-Packard.

He oversees a global team of project managers, engineers and other specialists that design and implement 200 locations. The team sets workplace strategy and design guidelines. While it used to be called the global real estate team, the name has changed to global workplace team to “reflect the expansion of the workplace beyond real estate to encompass HPE’s concept of ‘the edge,’” he says. 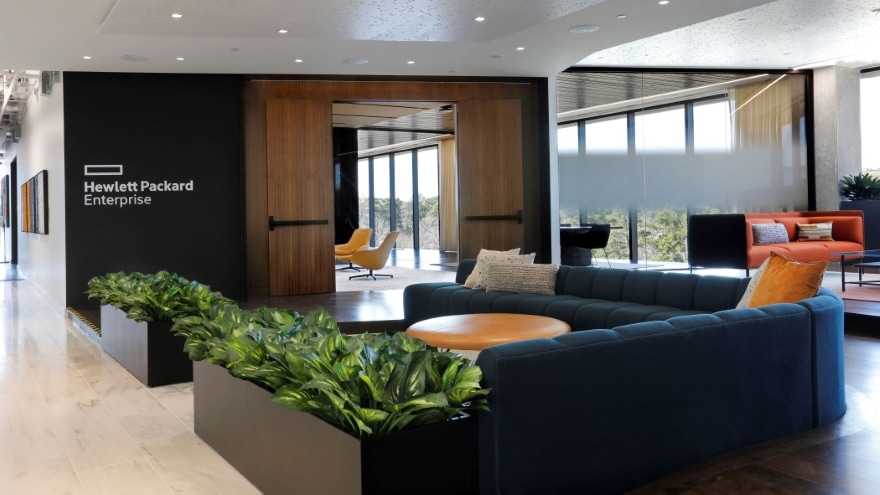 This latest building is the third headquarters Aimone has helped design and build with HPE. He says it’s been exciting to see technology become more integrated with design, especially because HPE uses its own tools and systems.

One of his favorite parts about working on this project has been collaborating with the CEO, Antonio Neri. Aimone says it’s rare for a CEO of such a large company to be so involved in a construction project, but that Neri was very interested in the design process and ensuring that it would meet the needs of employees.

“Coming into work with people who care about what they do is very fulfilling,” Aimone says. “I have a great amount of respect for the team I work with. It’s one of the many reasons I’ve been here as long as I have been.” 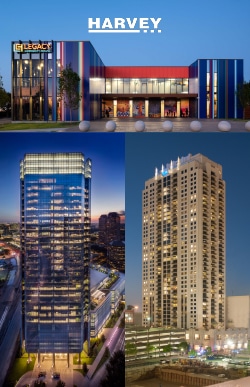 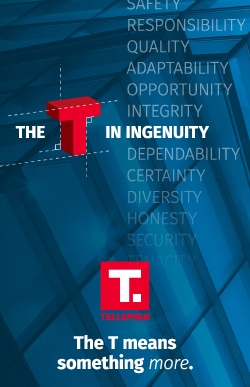 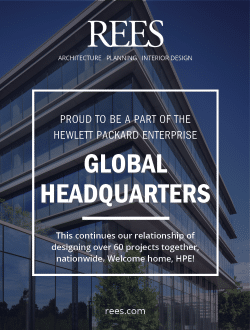 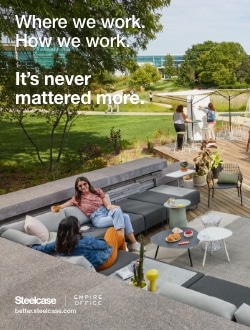