From drawing board to skyline

The Amazing Brentwood, scheduled to open in spring 2021 in Burnaby, British Columbia, is nothing like the city bordering Vancouver has ever seen. 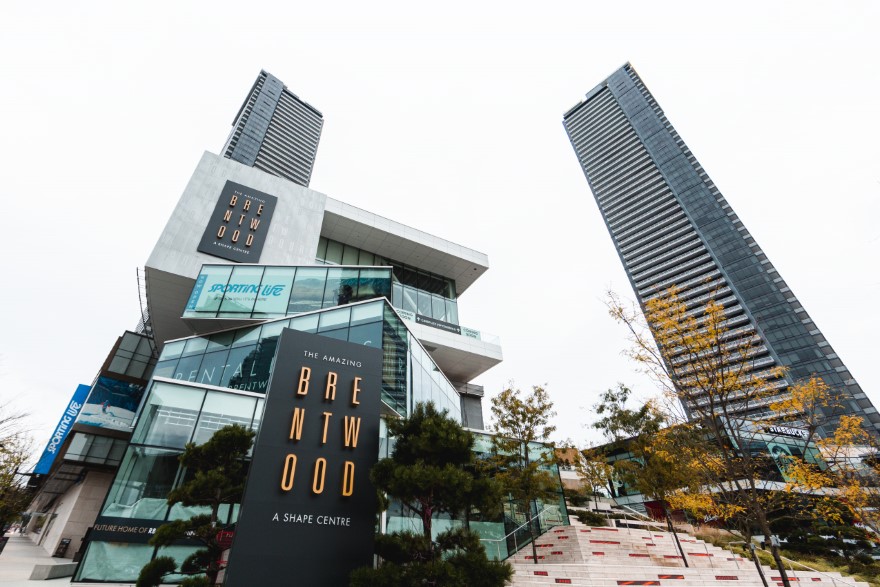 It pierces the skyline with three glass towers, two at 60 stories, one at 54, on 8 acres. Those towers, with 1,500 residential units, rise out of a 500,000-square-foot mall and podium on top of 1.2 million square feet of parking—and The Amazing Brentwood is only in its first phase of a planned 28-acre development.

At a cost of $1.3 billion Canadian ($975 million American), the SHAPE Properties Corp. project is less a case of “go big or go home” than one of “go big and come home” because of the developer’s emphasis on residential living, not just dramatic views.

As the executive vice president, construction at the helm of SHAPE’s projects, Simon Holwill not only knows the technical requirements needed to get the work done, he’s been part of the paper chases in project planning and revising that come long before a foundation is poured. 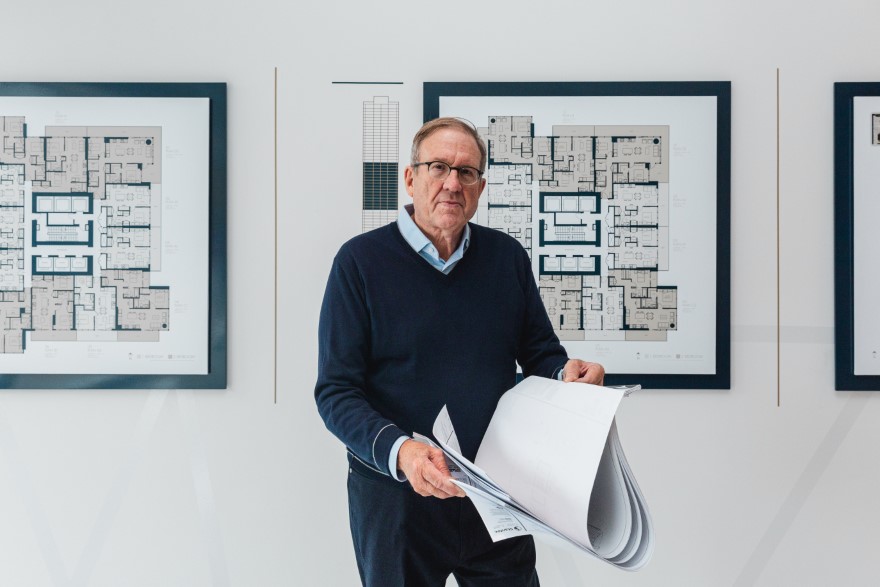 “We’re building communities,” he says. “SHAPE has its own development, design, construction, operations and customer care divisions and though it can be a challenge to find personnel who work on this scale, we have the network that can carry our projects through.” 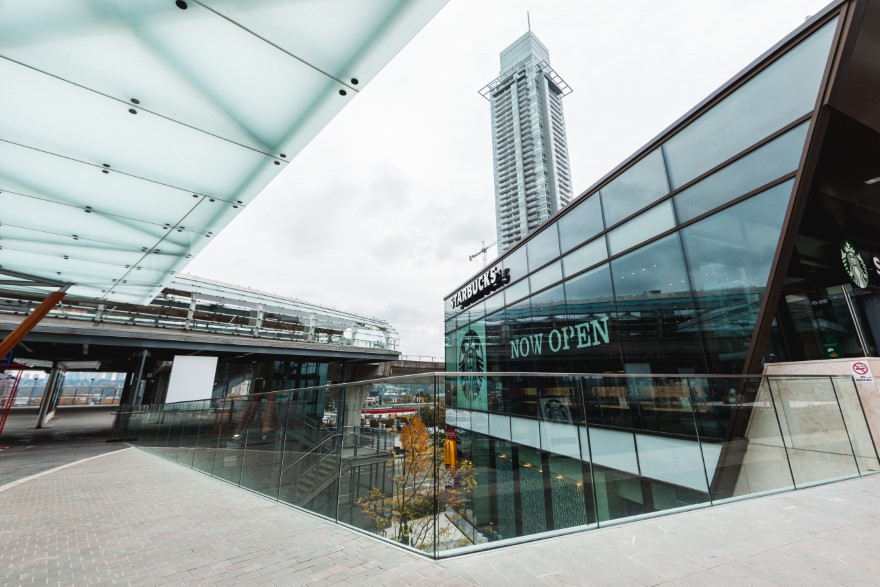 To move The Amazing Brentwood forward, he assembled a staff and a team including the architectural firm Stantec and construction managers like Axiom Builders to produce drawings and contract administration.

“I’ve learned that the projects are now so big in scale and scope that there are limited qualified contractors and trades to carry them out,” he says. “I spent my first 1 1/2 years sending out RFPs to find qualified companies.”

Beyond the drawing board

It took eight years to design and build phase one of The Amazing Brentwood. Tenants and buyers will enjoy a European-style minimalist residential design—functional and simple, with the retail taking on a luxury flair and public transportation close at hand, Holwill says.

The proximity of transportation—The Amazing Brentwood is built next to the SkyTrain serving the Vancouver area—brought regulatory issues Holwill and his team needed to work through to get the project permits. 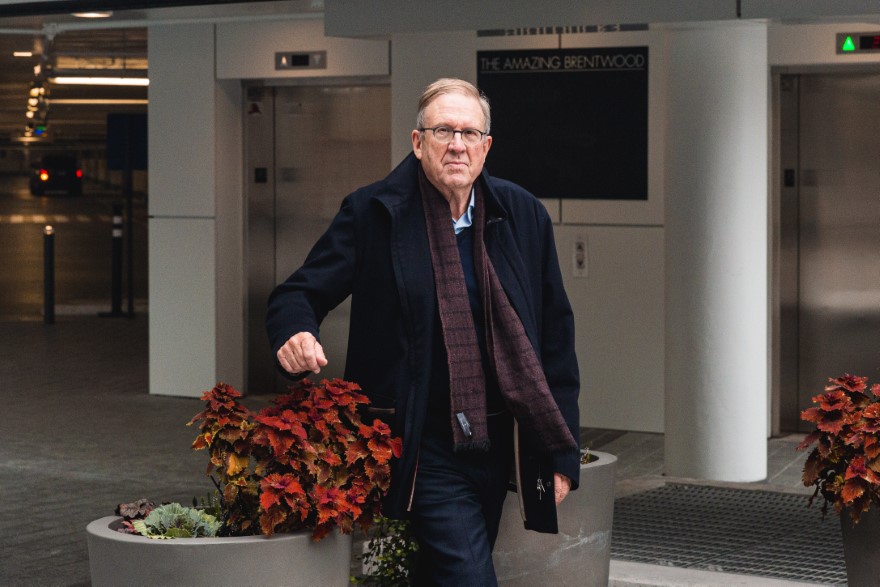 “For example, during the excavation and foundation works phase, we had to monitor the guideway continuously with inclinometers and surveyors while digging the largest excavation in Vancouver history right next to the elevated rail line,” he explains.

Even before the excavation began, Holwill and his team were building out, around and even below The Amazing Brentwood. The site is a transit hub serving buses as well as the SkyTrain and relocating the bus loop required city and transit authority approval. Executing the needed legal agreements took years and continued as the completion of the first phase of construction approached.

While SHAPE had sold the residential units in the first three towers, it also implemented a rental component to one tower to diversify its portfolio. Future phases remain in the planning and permitting stages but could add 11 more towers, including purpose-built office towers and more rental apartments, Holwill notes. 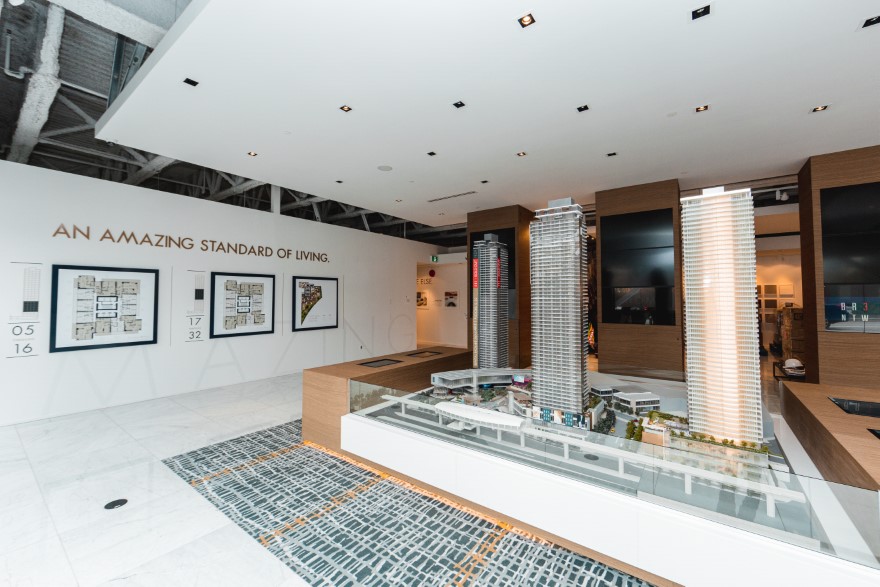 EllisDon Corp. has managed the commercial construction with its work encompassing off-site infrastructure works and related civil work on the site’s interior roadways, as well as the foundation works, parking and commercial podium.

Axiom Builders has managed the residential construction, handling everything above the commercial podium for towers one and two and all of the third tower.

SHAPE also relied on a network of contractors and engineers Holwill has called on for decades. Nemetz & Associates designed the $60 million Canadian ($40 million U.S.) electrical systems and has done the same for other SHAPE projects.

In pouring about 200,000 square yards of concrete for The Amazing Brentwood, Syber Concrete Forming successfully tackled the biggest project in its history with Holwill’s gratitude, he says.

And though Etro may be a fast-rising newcomer on the Vancouver construction scene, Holwill has known principal Mike Maierle for more than a decade and trusts his company.

As complex as The Amazing Brentwood construction is, there’s been plenty more on Holwill’s drawing boards, including the City of Lougheed—described as a 37-acre mixed use city center comprised of 20 residential towers with a first phase scheduled to open in 2023.

Also coming to the Vancouver area is Richmond Centre, a joint venture with Canadian developer Cadillac Fairview that will transform a shopping center into a mixed-used complex with more than 2,000 new housing units on 27 acres. Construction is scheduled to begin in spring 2021. 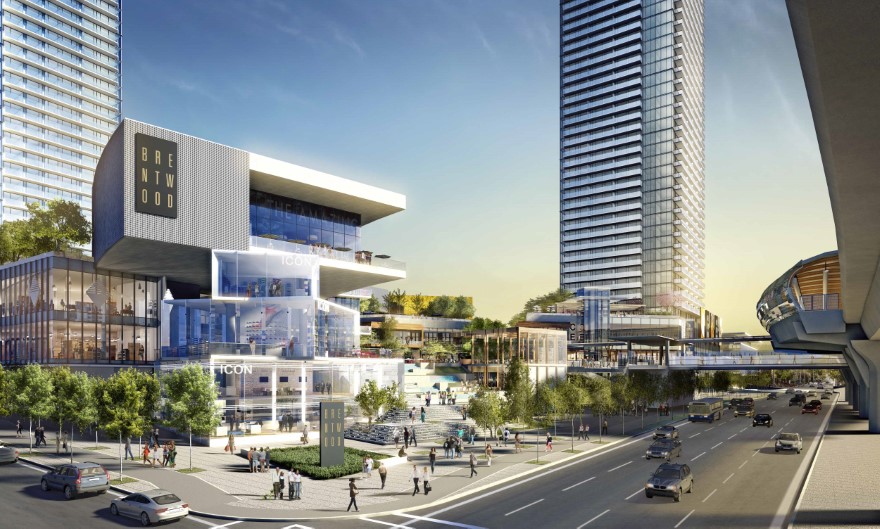 As residents and tenants settle in at The Amazing Brentwood, Holwill will be settling into the semi-retired life of an independent consultant.

Though he’s risen from a laborer to the upper echelons of the industry and led the construction of some of Canada’s most ambitious development, Holwill could have just as easily settled into an academic career.

After his family emigrated from England to Canada, he spent much of his youth helping his father in his plumbing business while also writing for local newspapers and promoting concerts. He learned about attention to detail and pride in workmanship from his dad and continued to work in construction during the summers while in college. 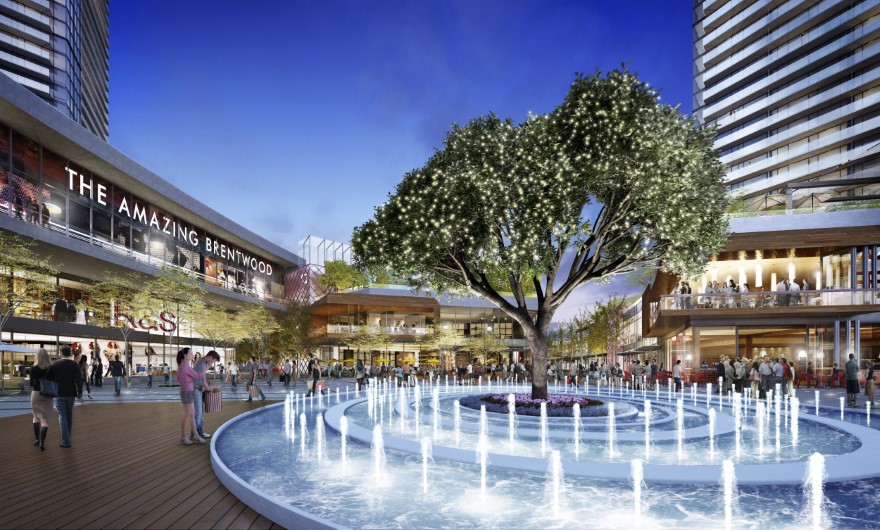 While Holwill pursued a Master of Arts in Humanities from Simon Fraser University, he continued working union construction jobs to pay for his education. The unions offered courses in contract law and he also attended night school at the BC Institute of Technology where he studied construction management.

In 2005, he established the self-performing company that built the Fairmont Pacific Rim, a 48-story, five-star hotel and residences in Vancouver, for Westbank Projects Corp., completed in time for the 2010 Olympics.

After years of juggling multi-faceted demands to complete a transformation of Vancouver and beyond, Holwill does not anticipate a sedentary life in semi-retirement.

“My doctor told me I was not a good candidate for full retirement,” he says. “My wife agrees. Besides, I enjoy the interactions. I have been very fortunate to have had the support and friendship of many people in the industry. It is very gratifying and is the best part of a life in construction for me. It is all about relationships, day in and day out.” 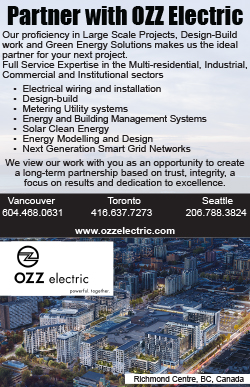 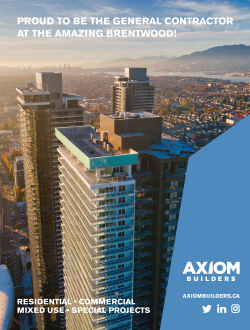 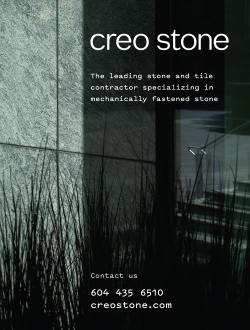 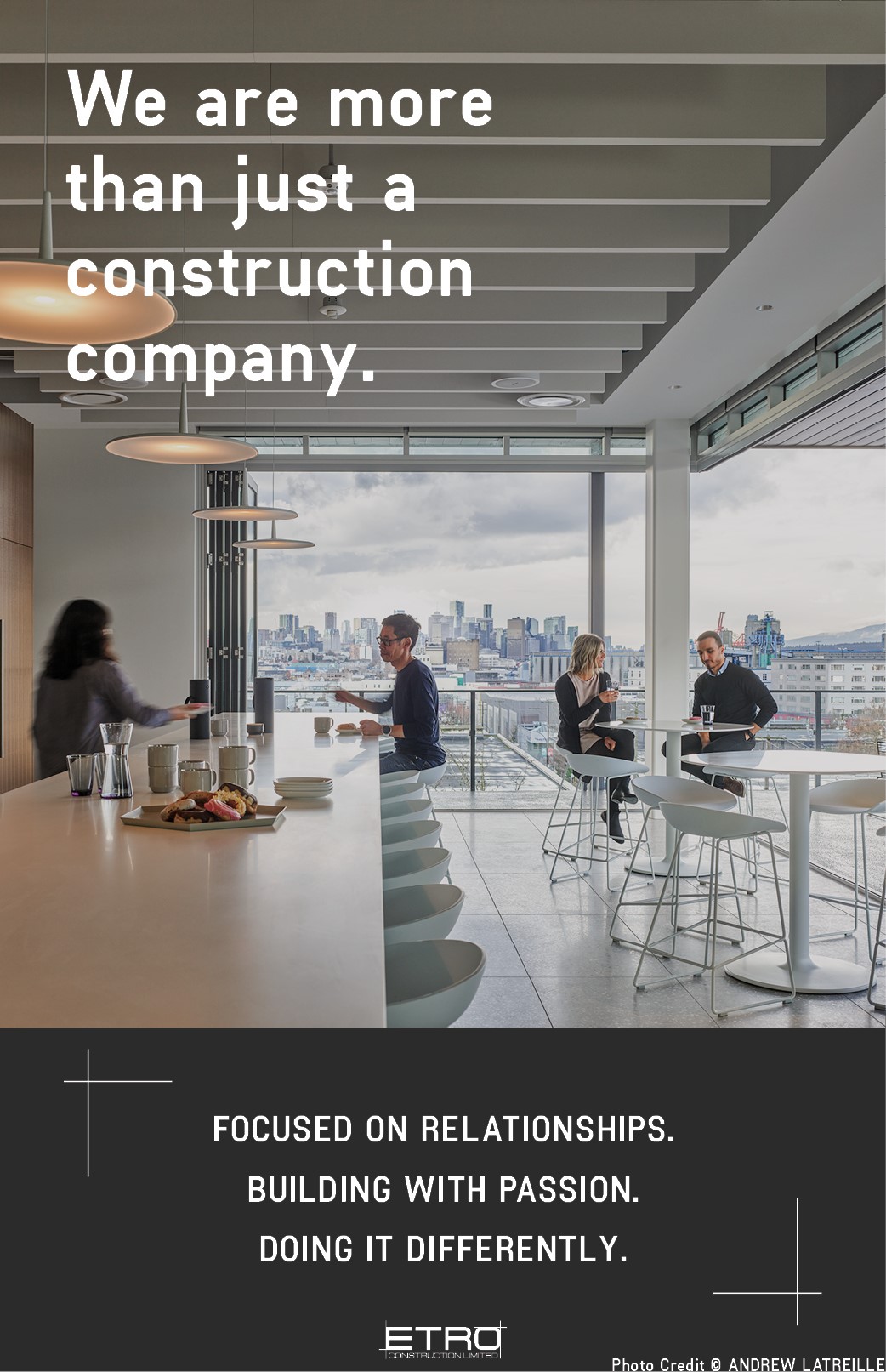 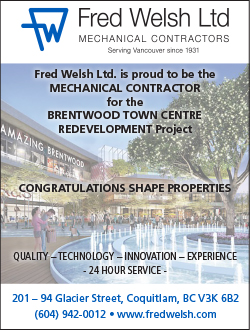 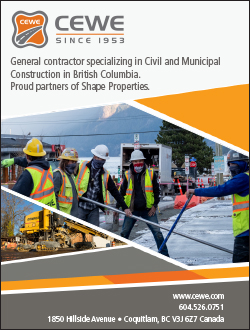 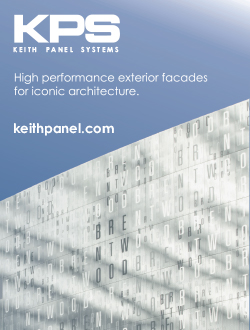 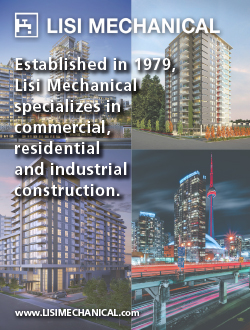 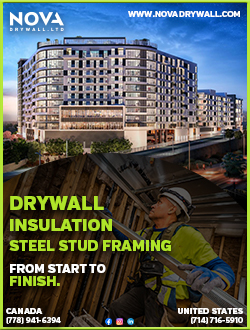 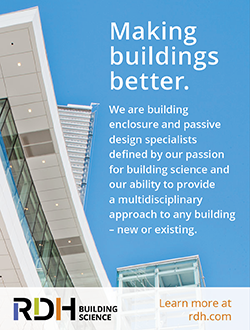 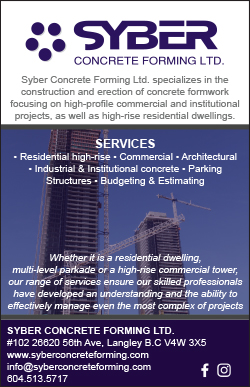