Supporting the future with a connection to the past

In 1865, just five months after the end of the Civil War, one of the parent institutions of what is now Clark Atlanta University was founded by two former slaves, setting the foundation for a school that is the oldest Historically Black College or University (HBCU) in the South. 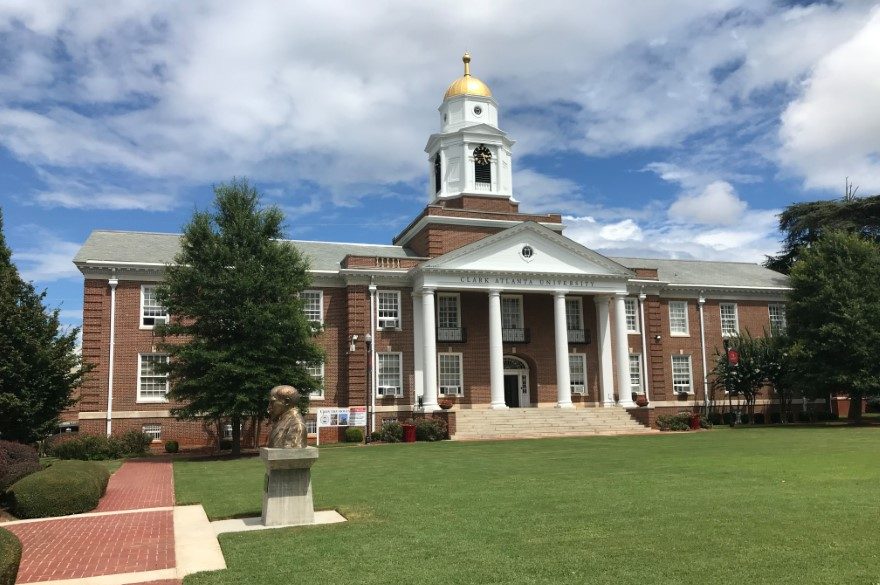 The recently repaired bells inside the Harkness Hall clock tower—CAU’s administrative building—are ringing loud and clear to herald in a new wave of campus activity under the leadership of the new President Dr. George T. French Jr. It’s just one of the areas overseen by Shelton Anderson, the associate vice president of facilities, who manages campus facilities and operations. He’s striking a balance between highlighting the history of the campus while modernizing infrastructure.

His latest endeavor is the renovation of the Thomas Cole Research Center for Science and Technology—more commonly referred to as the Thomas Cole Science Research Center. In addition to renovating approximately 210,000 square feet of laboratory, office and classroom spaces, the latest upgrades will also expand research programming to include other fields, such as epidemiology, to fight the COVID-19 pandemic. 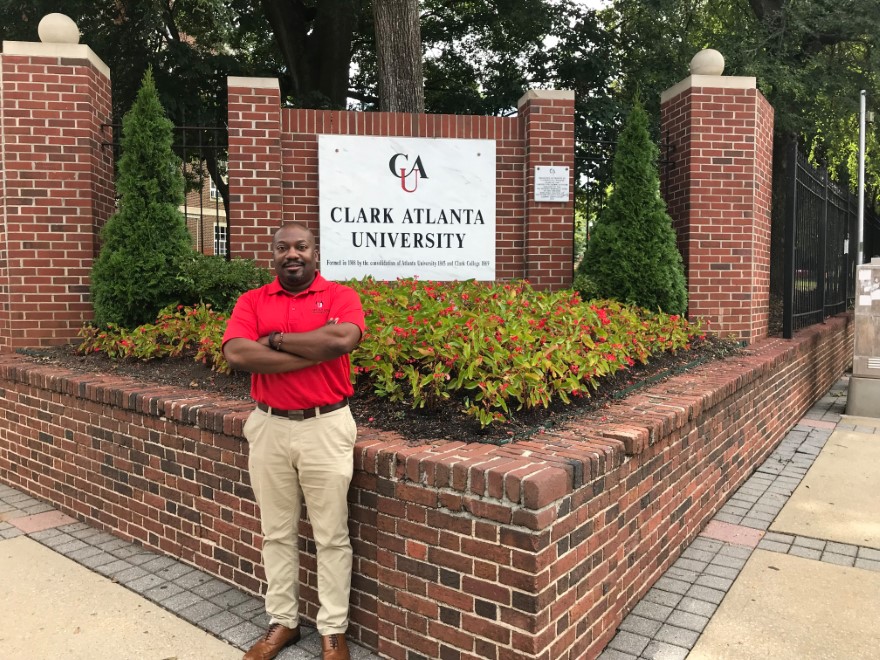 Anderson, a Marine veteran, says nothing—not coronavirus, politics or social disturbances—will stand in the way of the school’s mission of providing students with an environment in which they can succeed.

“Things are challenging, but it’s important to realize that someone is counting on you … and here at the school students are depending on us,” says Anderson.

In many ways, the Thomas Cole Science Research Center is the crown jewel of the campus. Now, CAU is investing in upgrades to its circa-1990s research facility.

The multi-phased project—estimated to cost between $10 million and $12 million—got underway in 2019. Classified as an R2 research institution with a focus on prostate cancer research, the building houses a unique space for biology, chemistry, physics and cancer researchers and faculty. Renovation work will include an overhaul of the HVAC system, a laboratory fume hood replacement, equipment and storage upgrades, and converting some spaces to a modern/open lab environment. 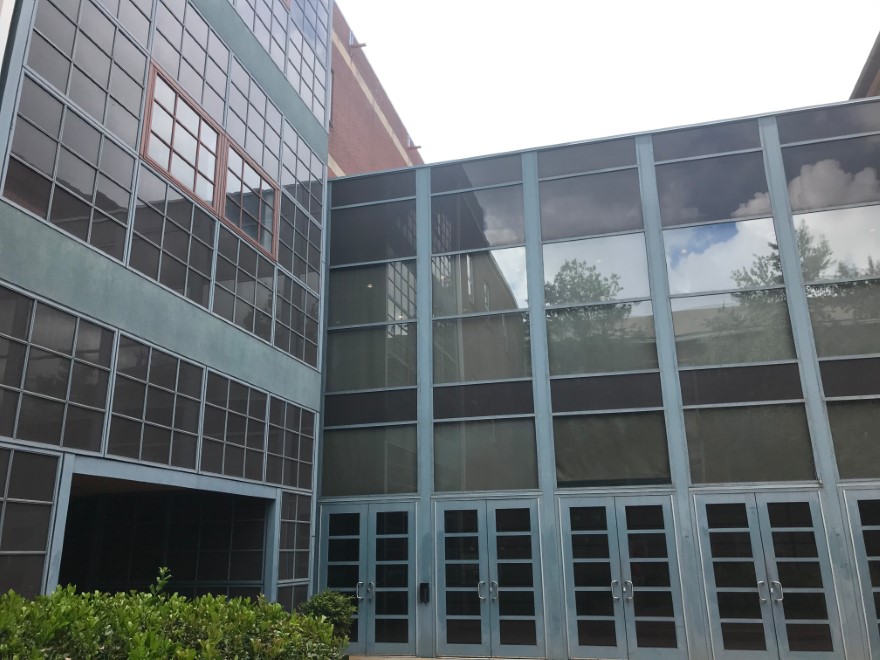 Upgrading 50 labs—housed on four different floors of the building—is a major focus for Anderson and his team. CAU also hopes to expand its research offerings by adding epidemiology studies to support the fight against COVID-19. Once complete, with scheduling enhancements, the space will accommodate up to 200 scientists; more than double what it has now.

“We’re not just focusing upon what we can do now, but looking ahead to what we can accomplish over the next several years,” Anderson says.

Phase One of the project will update the physical building systems, such as HVAC, electrical and plumbing.

Phase Two—starting in October 2020 and slated to finish in September 2021—involves more intensive lab renovations. Specifically, changing a number of lab spaces from small, contained rooms to an open-concept lab environment, much like the one used by Georgia Tech University. The goal, Anderson says, is to create more flexibility within the space to enhance functionality allowing for greater collaboration between scientists. 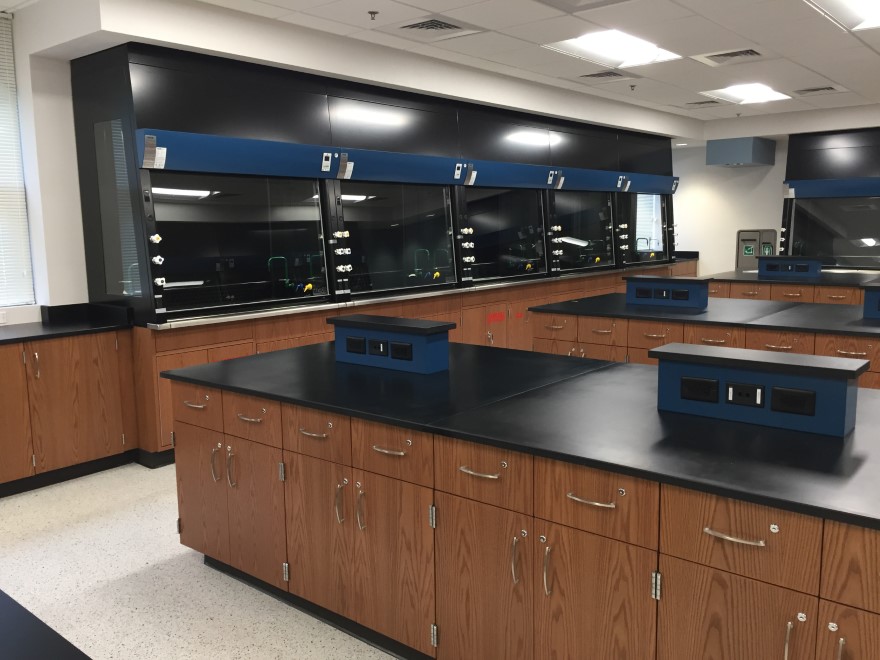 The lab equipment used for research, can be mobilized by rolling it into different areas using plug-and-play models or machinery, rather than having equipment fixed in a specific location. The first step will be knocking down the walls to enable moving the equipment around, which also allows each area to support more people with greater dispersion—a particular concern during the COVID-19 pandemic.

“To grow, we need our physical buildings to support new types of research,” Anderson says.

Another feature of the labs will be glassed-in areas so students and guests can see researchers in action. These spaces will also allow for more natural lighting—something scientists don’t often get to see, Anderson jokes.

“Adding both programming expansion and upgrades to these labs to promote more research certainly makes this a project that ties into the medical times we are in,” Anderson says. “Our upgrades to research can connect us to other institutions across the world, and enhance the environment of researchers actively developing cures.”

In addition to helping bolster the school’s scientific research, Anderson has devoted time to projects highlighting history across the campus.

It started with the clock tower and bell system project last winter in Harkness Hall, the University’s administrative building. Inoperable for at least a decade, the bell was brought back to life and rang for the first time in years this past Easter Sunday—and has continued to ring on the hour, every hour, in honor of first responders, the faculty and victims of COVID-19. 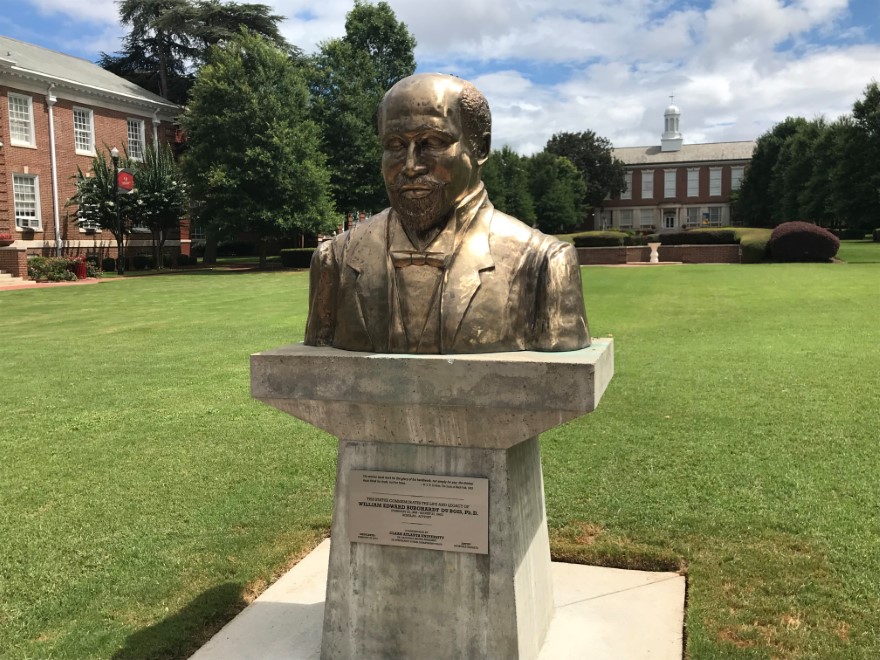 “Clock towers stand as a symbol to honor and assemble people in churches and communities,” he says. “Our university president and leadership found it fitting to bring it back as a component of our campus culture.”

Anderson and his team also installed banners throughout the campus, highlighting historical figures like W.E.B. Du Bois, the first African American to earn a doctorate and a founder of the National Association for the Advancement of Colored People (NAACP). Du Bois later became a professor of history, sociology and economics at the school. Future plans include exterior murals to further showcase the school’s history.

“We want our students to be inspired by our history, our setting and our role as an educational gateway for learning,” Anderson says.

Anderson is mindful of his role at the university, seeking to communicate openly about how facilities will respond to the educational and cultural needs at the school.

Especially now, he says, students face many challenges—from COVID-19 to issues regarding race, personal freedom and equity. Just recently, students from neighboring colleges in the community were tazed by local police during the social injustice demonstrations in Atlanta. 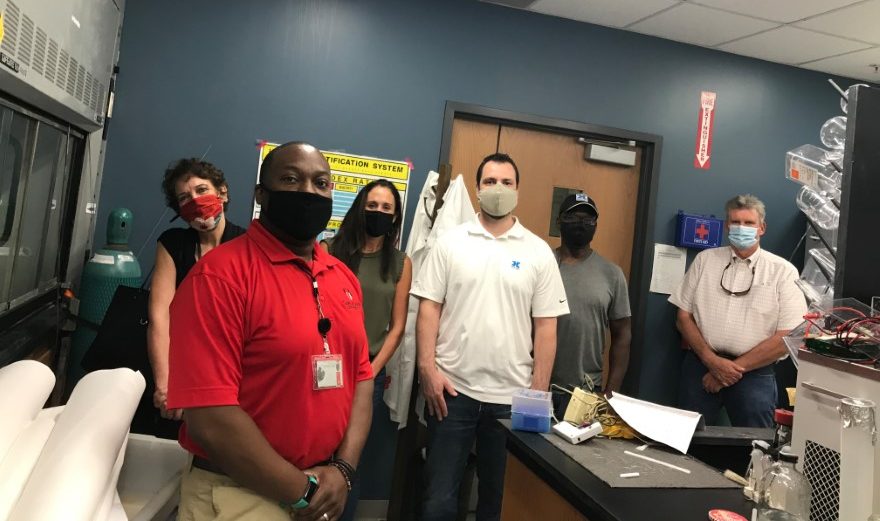 As part of a university known for its commitment to social justice, administrators like Anderson are not ones to sit on the sidelines.

“We needed to provide positive reinforcement, a sense of calmness and resolve,” he says. “Our goal is to be supportive of the students and help them understand the changes being thrust upon them.”

As a former sergeant in the U.S. Marine Corps, serving at Camp Lejeune in North Carolina, and engaged in various overseas deployments and contingencies from 2001-2005, Anderson’s commitment to supportive action is part of his DNA.

And while he’s enjoyed a varied career in corporate real estate, finance and project management since then—from working as a mortgage branch manager at New Frontier Financial Services in 2005 to serving as a senior director of global real estate at Equifax—his military training has served him well, regardless of which industry he is part of. 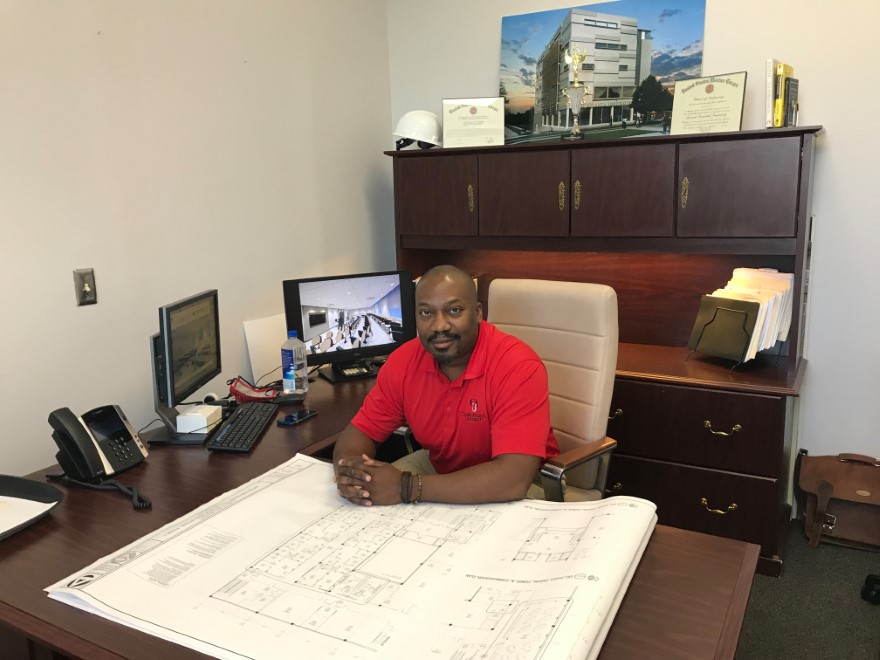 “Joining the military was one of the best decisions I made in my life and afforded me many opportunities,” says this St. Louis native. “It gives you an enhanced ability to rapidly problem-solve in challenging circumstances.”

As a Marine, Anderson says he learned to successfully handle projects under pressure; separate anxiety from fear; and find ways to channel calm resolve and rational thinking into constructive problem-solving—all skills that are required in project management.

“We learn how to perform best in chaos,” he says. “People depend on us to deliver.”

A big component to his success is his care for those in his community and he was honored to join CAU last July, he says.

“You don’t go to the Marine Corps, or work in certain places unless you care about people,” Anderson says. “We owe it to Du Bois, our ancestors, and all those who built and fought for this school to protect its legacy, our students and impact on the community.”

With nearly 4,000 graduates each year, Clark Atlanta is well on its way to making a difference.

“That doesn’t happen unless you work to develop a place of acceptance,” Anderson says. “Preserving a place of peace and productivity is what keeps me grounded.” 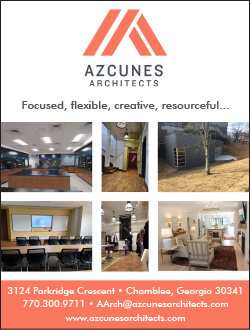 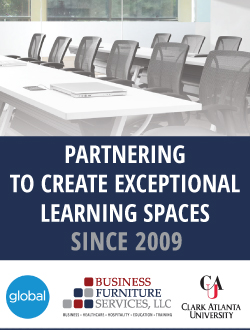 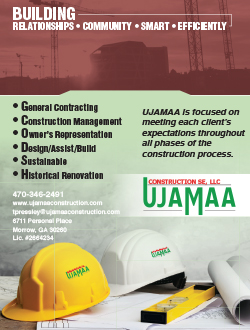 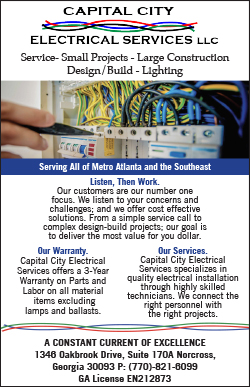 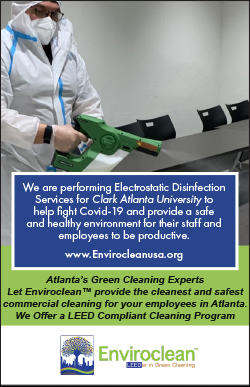