Seth Katz can’t wait for the day when COVID-19 restrictions are lifted. As a lifelong automotive enthusiast and mechanical engineer, nothing would make him happier than driving his vintage BMW from his home in New Jersey down to one of his largest jobs in Washington, D.C.

There, he’ll check out a major project totaling more than $50 million at 1201 Pennsylvania Avenue, a crown jewel for Sentinel Real Estate that he’s worked on since 2017. 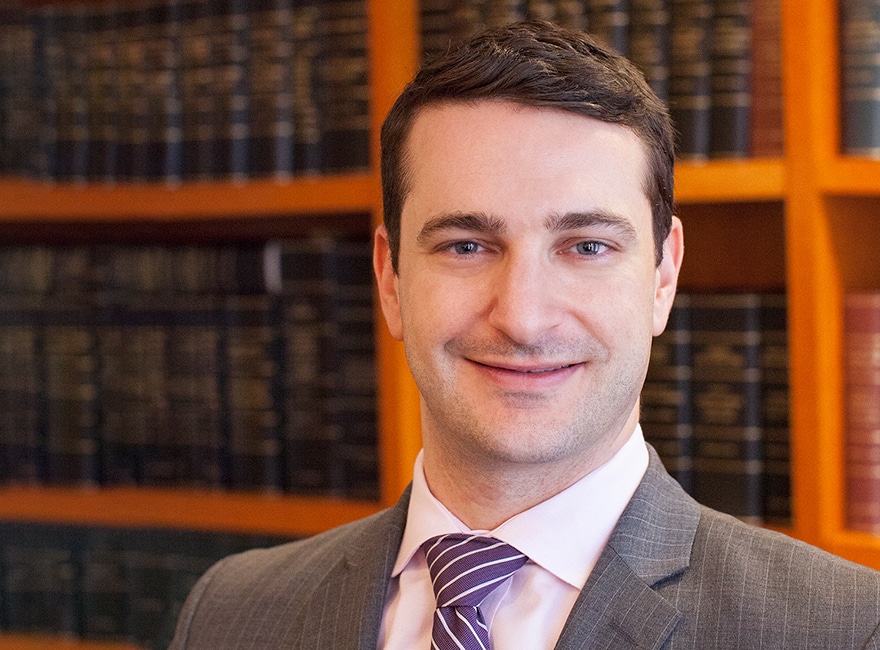 As the vice president of commercial design, development and construction for the global real estate investment advisory and asset management firm, he’s helped modernize the iconic office property just a few blocks from the White House in the heart of DC’s Pennsylvania Avenue historic district.

Now mostly occupied by new tenants, the renovated building is home to a new lobby. It also has a state-of-the-art conference and fitness centers, and plenty of white Italian marble, glass and metal—all lit up by sky lighting that shoots up 12 stories. Capping that will be a rooftop deck with sweeping views of the U.S. Capitol, the Washington Monument and other D.C. landmarks.

“We manage lots of different types of assets around the country ranging from suburban office parks to corporate campuses and urban high-rises, but this one’s special to me,” Katz says.

Built in 1981, 1201 Pennsylvania Avenue is a towering skyscraper—one of the tallest in the city—at 160 feet. It was the home of a prestigious law firm until 2016, at which time ownership decided to completely revitalize the building from the architectural lobby upgrades to the installation of new variable air volume mechanical systems and high-tech outside air handlers with energy recovery capabilities. 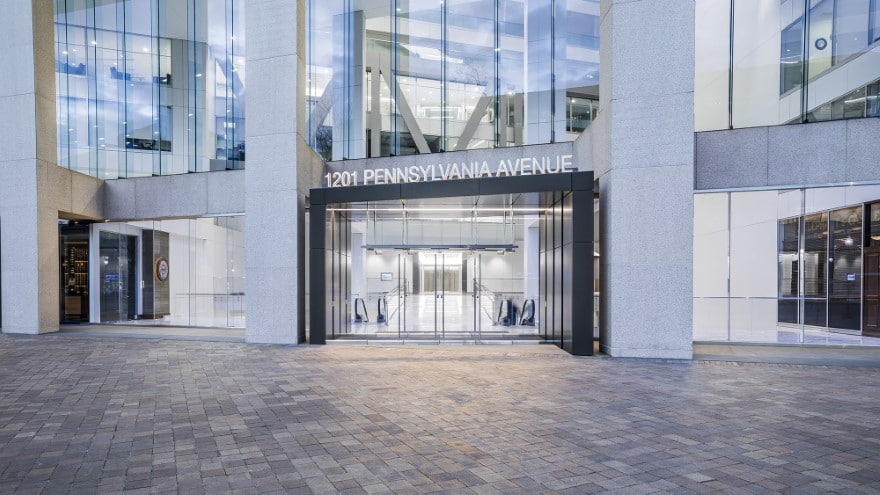 As Katz explains, the dynamics of D.C. have changed as law firms migrate east toward the Capitol and a new generation of tenants moves to Pennsylvania Avenue.

“We are very proud of it,” he says of the building owned by Sentinel since shortly after it was constructed. “Every dollar spent is adding value to property that will be almost fully occupied by this time next year,” with 90 percent occupancy achieved as of early May.

Not having worked in the D.C. market for years, Katz was gob smacked when he entered a restaurant formerly located in one of the retail suites in the building. It was before he started his position with Sentinel.

With a lobby 12 stories high, Sentinel spent approximately $7 million on a complex renovation that involved new finishes, drywall details, paint and balconies. Work was coordinated with the local asset and property management team. 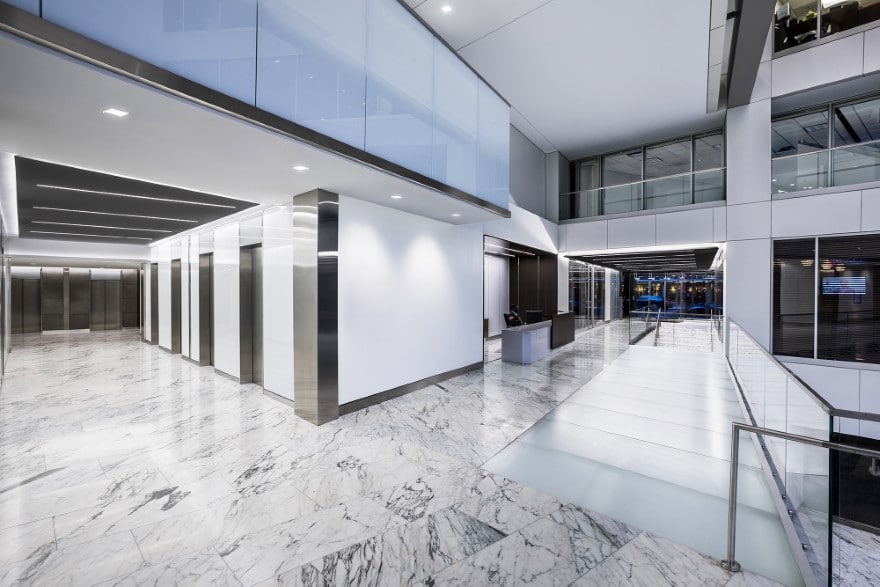 “The biggest challenge was keeping the tenants safe while working 12 stories above, but we were able to line the entire lobby with scaffolding to protect the tenants below,” he says.

Aside from cosmetic upgrades, priorities included upgrading the HVAC and air intake systems, renovating elevator lobbies and restrooms to modern design and code standards, and installing energy recovery air units and ductwork. Prior to the lobby renovation project, elevators had been completely modernized with updated cabs and new equipment

In this age of COVID-19, interiors are arranged to facilitate social distancing—an on-site conference center cuts down on the need to travel, for instance. 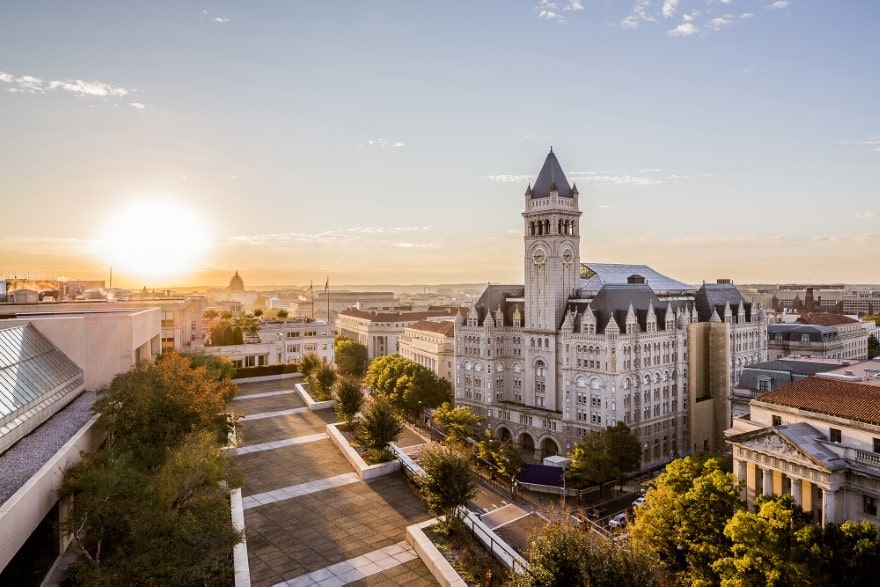 Sentinel also added a fitness center and a 15,000-square-foot roof terrace complete with a catering kitchen. All that’s left to do is replace cooling towers and the original central chiller plant with new equipment that will reduce energy consumption by at least 25 percent.

“The roof terrace renovation was a painstaking process with plenty of hurdles to go through, but it’s beautiful and one-of-a-kind,” he says of the nearly finished renovation. “There’s no other view like it. You can even watch planes come and go from Reagan Airport.”

Beautiful, yes, but loaded with challenges. At one time the roof deck was available to a single tenant; now it’s a perk offered to all. As a result, the roof deck needed to be reinforced to support 600 pounds per square foot for planters and other heavy objects. In a related update, a bridge was built from the elevator lobby to the roof deck, requiring staging erected on the 11th floor. 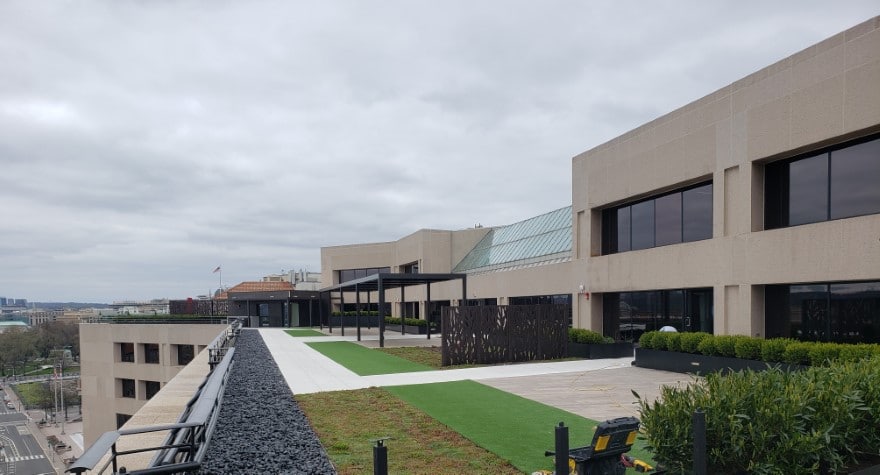 “Office projects are challenging enough, but here’s a case study of how everybody worked toward a common goal to make something beautiful,” Katz says. With a mechanical engineering background, Katz says his strength is assessing what work needs to be completed while developing a cost and schedule analysis for an efficient leasing program.

“We devised a system where we knew what it would cost and how long it would take to demo and renovate each floor. That way, we were able to avoid spending money before having a lease in place while ensuring that we were able to meet delivery requirements ahead of tenant possession,” he says. “Our leasing and property management/upgrade process is a well-oiled machine.”

Fine-tuning is something Katz knows about, as a weekend racetrack and lifetime automotive enthusiast and tinkerer, and through his education as a mechanical engineer.

Following a course of study at George Washington University, Katz earned a bachelor’s in mechanical engineering in 2004 and a master’s in engineering and technology management in 2007.

His career track kept him in Washington, D.C., first as a mechanical and project engineer at BEP, Department of the Treasury. Shifting gears to enter construction, project management and real estate development, he worked for Rand Construction in 2005, Duball LLC in 2007, KGO Project Management in 2012 and Northpoint Realty Partners in 2014. 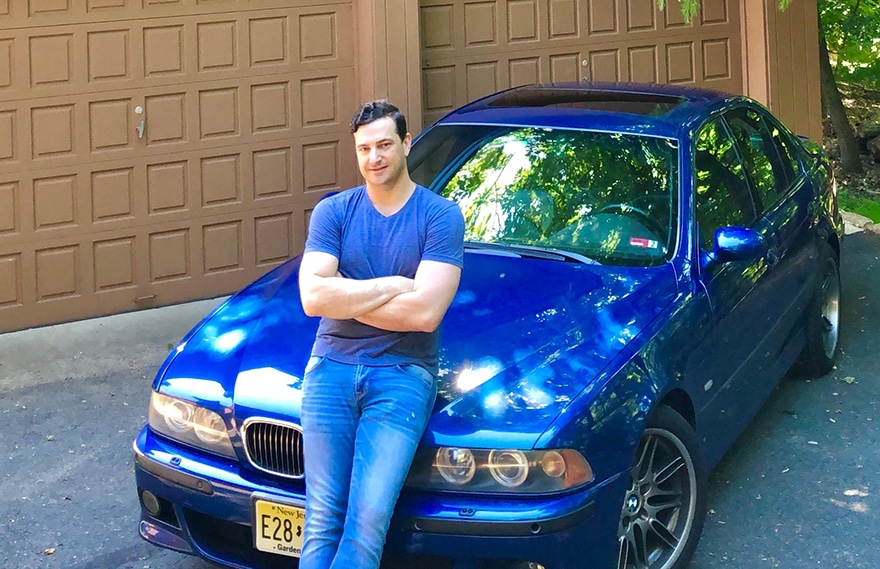 When the opportunity came to join Sentinel’s New York-based commercial team he couldn’t pass up overseeing the design and construction of a portfolio of purchased and managed properties nationwide with one of the best teams in the business. Sentinel, he says, was looking for a person like him—a “jack-of-all trades.”

“When I made the move to New York and Sentinel, I felt I had finally arrived,” he says. “Here I was able to focus on what I’m good at and expand that vision to markets around the country.”

Running the course of many projects, there’s no question the reward lies with reaching the finish line. In some cases—like this latest D.C. project—it’s bittersweet. Viewing the property only through photos and weekly conference calls, he laments that he is missing out, especially now that the flowers on the roof deck are in bloom.

“There’s no greater joy than driving a project forward and breathing new life into it to make it beautiful,” he says. “Hopefully, I’ll be on the road down there soon.” 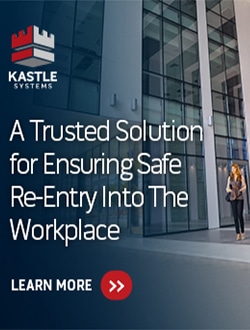 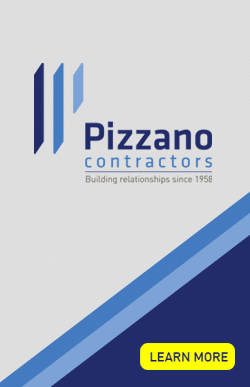