Whether it’s the friendly folks behind Limani Hospitality Group who’ve welcomed him as one of their own, or his four kids, including one who followed in his footsteps, Russ Delisi is all about family.

In fact, while his skills have grown considerably over his three-plus decades in the architecture world, that doesn’t mean his 30-year-old son—a construction project manager—can’t teach him a thing or two about the trade. 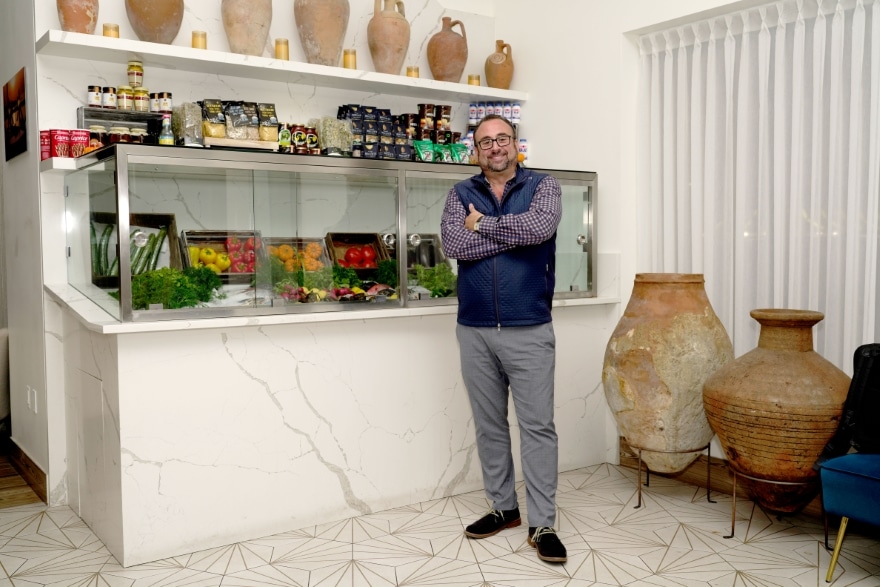 Delisi recently called his son to tell him about a missing part that had stalled a project, preventing a utility from switching the gas on. His son wasn’t surprised: “Oh, yeah,” he told his dad. “That should’ve been caught.”

“He’d obviously learned that lesson before,” Delisi says. “He just didn’t teach it to me soon enough.”

At Limani, Delisi has found a professional family that moves at his pace, and a role that’s right in his wheelhouse. The New York-based restaurant group, which specializes in Mediterranean restaurants and Italian steakhouses, is now quickly expanding to the south and west.

A longtime drummer, Delisi likes to say that he’s the band leader of Limani’s development efforts. Whether working with landlords on construction lease exhibits, retaining designers and architects or overseeing construction and purchasing, his role goes up and down the ladder.

“It’s paramount to be respectful to all team members,” Delisi says. “I was always reminded by my mother that you catch more bees with honey than vinegar. Working in unison with a common goal drives success. Managing the laborer in the field up to the CEO, and everyone in between, allows me complete control of the project and its schedule and budget.”

Delisi recently wrapped up work on a Limani restaurant (the group’s flagship brand) at Phillips Place in Charlotte, North Carolina. The 8,000-square-foot Mediterranean eatery features a 45-foot-tall rotunda at the main entrance, along with custom light fixtures and walnut wood mill work throughout.

Slated to open in late 2022, the new Limani features the octopus mosaic tile that the restaurant group installs in every Limani and Limani Grille location—a nod to their specialty dish, which Delisi, a foodie, counts as his favorite item on the menu.

The space also boasts a round white bar with a curved glass facade from London that’s lit from behind with LED lights so it appears to glow. And with white and walnut decor and mint-green sofas throughout, the entire space has a sophisticated, airy ambience, he says.

Construction for the project took about 20 weeks—though Delisi says it wasn’t exactly an easy build. All 65 windows were replaced with a sprawling, beige and white facade lined with two levels of floor-to-ceiling windowpanes.

Beyond the exterior overhaul, Delisi realized after demoing an area that the exterior studs were rotted due to poor waterproofing and years of resulting water infiltration. The discovery added stress to the schedule, as all work was stopped until repairs could be made, and cleanup work was done.

As with every project, Delisi took away lessons for the next one. 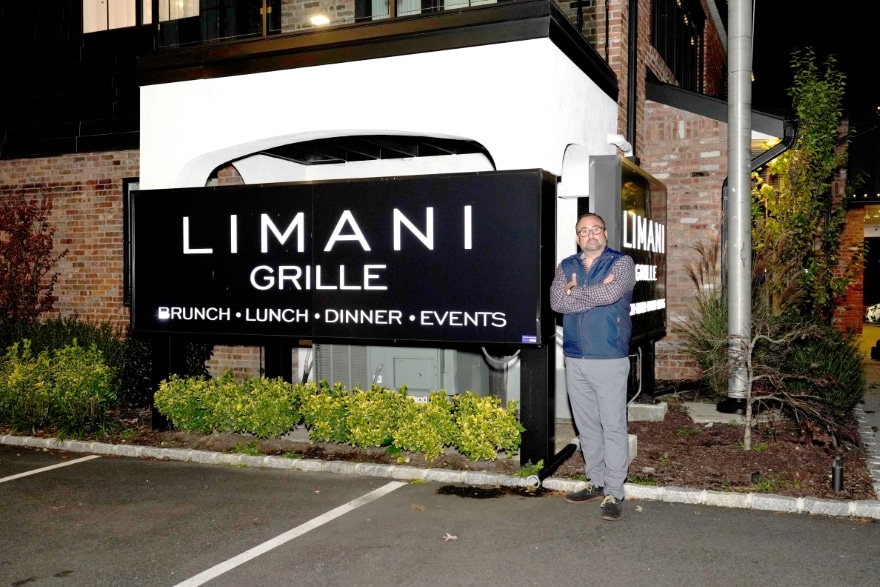 “The team on the Charlotte project was ‘all in’ from day one,” he recalls. “Russco’s site superintendent Joe Main led the field team like a general in combat, anticipating hurdles and always staying ahead of the curve. And a strong subcontractor base afforded us a successful buildout.”

While Limani and Limani Grille remain the company’s focus, the group recently identified a new niche: an Italian restaurant in the heart of Long Island. Located in Huntington Station’s Walt Whitman shopping center, the now-finished restaurant—Carpaccio—ran into a snarled supply chain because of the COVID-19 pandemic.

“It was a very colorful project in terms of the speed at which we had to work,” Delisi explains. “The project had its share of complications, and of course, with the new normal, we were challenged with supply chain delays.”

Carpaccio, which spans roughly 6,000 square feet and seats 300, is a paean to classic glamour, he says. The black-and-white themed restaurant features black awnings and black bricks across a white façade, with a tile border around the restaurant’s entrance. Inside, white and black stone, black bricks and monochrome tiles complete the look. And in balmy weather, the restaurant storefront opens, allowing patrons to enjoy the breezes while they dine.

The restaurant’s menu spotlights authentic Italian cooking, with dishes like ceviche, meatballs and artisanal pizzas. True to its country of origin, it also features an expansive wine list, with every region of Italy represented.

Helping companies grow is what Delisi does best

On deck for Delisi is a new restaurant currently under construction in Boston’s Seaport district, along with another project at The Wharf in Washington, D.C. (scheduled to commence in December). Limani recently signed a lease on a property in Boca Raton’s Town Center, so he’s keeping an eye on that undertaking, as well.

For Delisi, helping young companies grow and evolve has proved the perfect use of his skills. After joining Barneys in New York in 2002, he quickly helped to grow the company’s footprint—all while expanding its purchasing, planning and construction project management teams. Likewise, when he started at Blink Fitness, the company had three locations; by the time he left eight years later, it had close to 100. 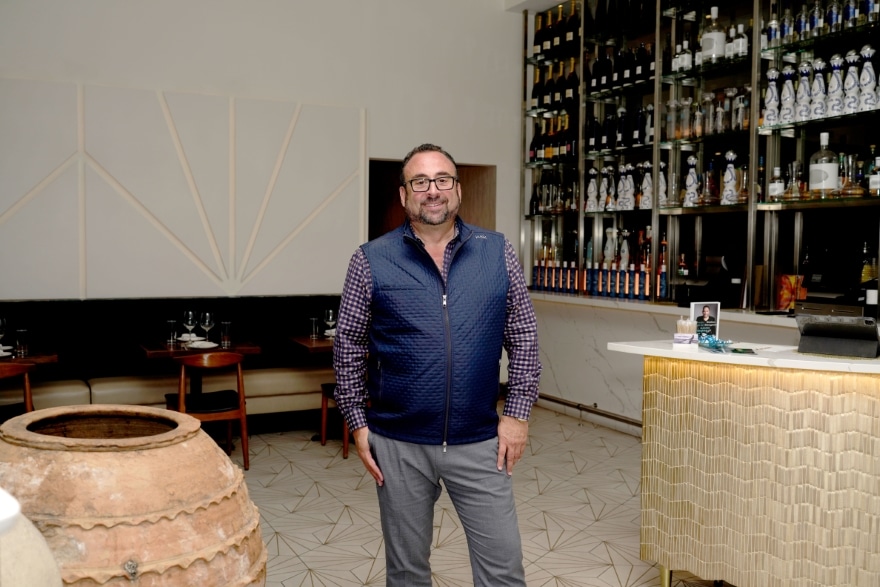 Right now, Limani has eight new projects underway in addition to the group’s six existing restaurant locations. It’s a lot to tackle, but Delisi’s goal is to continue to enjoy what he does on a day-to-day basis. He’s more than satisfied with the daily adventure of keeping the business growing and working on a product he truly believes in.

In his free time, he enjoys watching and playing tennis and golf. That’s when he’s not spending time with his children, three of whom live relatively close by. And of course, if he runs into a problem at work, his son in Arizona is just a phone call away.

“I’ve always said, you have to live every day like it’s your last—and one day, you’ll be right,” Delisi says. “Wanting to go to work versus having to go to work makes a world of difference.” 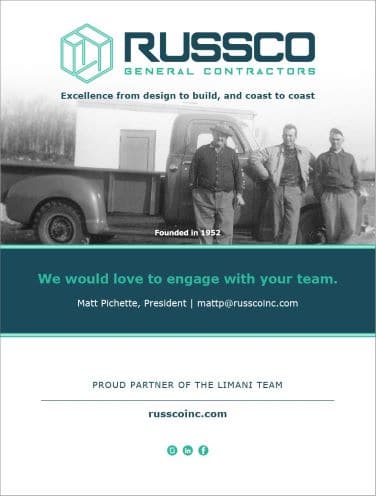 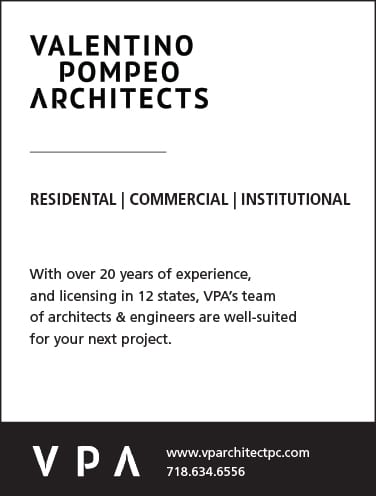