Ripple effect for all to enjoy

For many of us working in Boston on Sept. 11, 2001, it was a place where we gathered by happenstance that evening while walking the downtown and its perimeter, just trying to make sense of the awful events that had been unfolding since the morning commute.

The Christian Science Plaza, a sprawling site off Massachusetts Avenue, provided a welcome oasis where folks of all ages, faiths and ethnicities converged harmoniously. 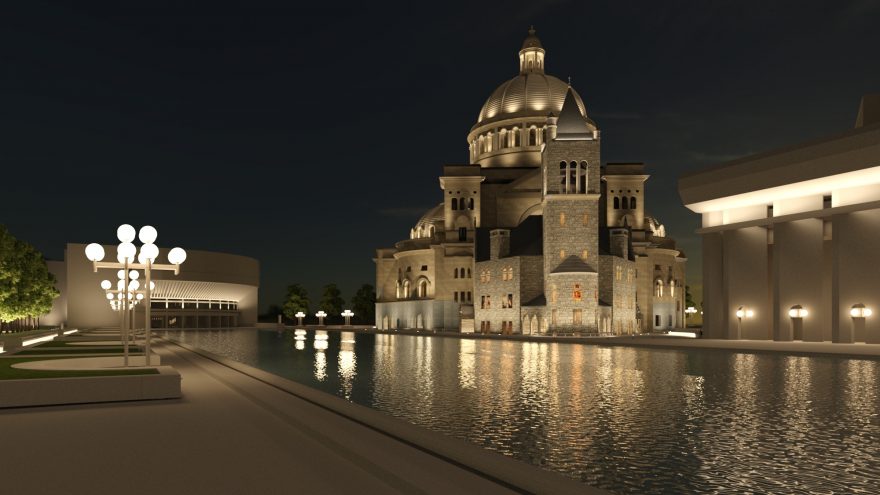 “The concept behind the pool today is of beauty and reflectivity year-round,” explains Robert A. Herlinger, a Christian Scientist from suburban Wellesley, as well as chief architect and strategist for what’s been a long-running redevelopment of the church plaza that, until next winter, will primarily focus on the reflecting pool itself.

Herlinger spoke to Blueprint in late March amid a start and stop schedule at the mercy of an early spring that still felt like winter. The purpose of the pool will remain the same, but a host of practical concerns necessitate some complex physical alterations that Herlinger expects to be complete before year’s end.

Long as a par-3 golf hole, the reflecting pool shouldn’t be any less impressive when shortened by a mere 16 feet and its depth reduced to 8 inches from its current 27 inches. After all, conserving water is incumbent on all Boston institutions, Herlinger reminds, and the shorter and shallower pool will reduce by two-thirds the millions of gallons it takes to keep it full for over half the year.

The shorter length will also offer easier access via a new walkway from Huntington Avenue, which intersects Massachusetts Avenue in a very congested part of Boston. And that concrete bottom has long been leaking into the massive parking garage below and further taxing the municipal sewer system. 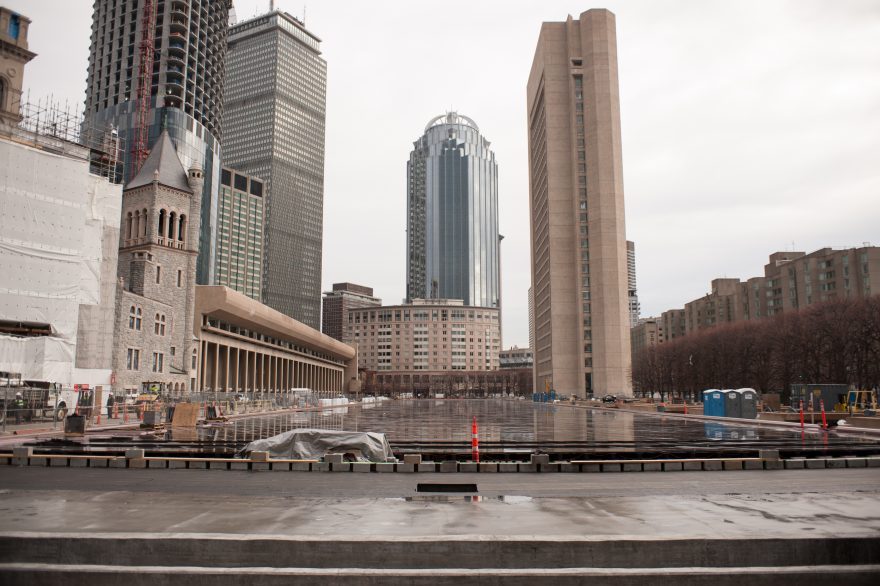 With the pool always emptied for winter, Herlinger’s crews have been replacing the bottom with raised black and patterned granite atop a new waterproof base. Year-round reflectivity will be sustained, even enhanced, he assures.

“When empty and subjected to subtle shines, concentric ripples will appear from the new granite bottom as if the Original Mother Church itself was dropped in the water, albeit on a smaller scale,” he says.

And not for aesthetics alone.

“This isn’t just a beautification project,” says Ingrid Peschke, who works for the Christian Science Committee on Publication at The First Church of Christ, Scientist. “It also includes elements of our theology: The idea that each one of us is a reflection of God. We want this pool to provide a place of quiet contemplation for our members all over the world, as well as for everyone else who visits the Christian Science Plaza.”

That message of reflection and inclusion is enhanced by related projects on all sides of the pool.

Concrete benches on Massachusetts Avenue have been replaced by wooden seating with “welcome” scripted in various languages. Though the Christian Science Plaza’s size, nearly 14 acres, makes it Boston’s largest privately-owned, publicly-accessible parcel, Herlinger can’t stress enough that it’s the opposite of “members only”.

“That whole concept of welcome extends not just from the standpoint of pedestrians on Mass Ave.,” says Herlinger, ably assisted in this venture by consultants that include Redgate Real Estate Advisors and the CRJA-IBI Group Landscape Architects.

“This place is intended to be a destination for peace, contemplation and safety. The plaza is our welcome mat. Everyone is welcome to come and get a sense of hope.”

The City of Boston designated the Christian Science Plaza as a landmark in 2010 because of its significance as a world-class modernist landscape ensemble. It’s been an integral part of the community since its establishment in the late 1970s, and serves as the international base for The First Church of Christ, Scientist (originally built in 1894), bringing in tens of thousands of visitors annually. The much-respected international newspaper, The Christian Science Monitor, is also published on-premises.

Still, in this part of town, any project is certain to have a spillover effect—perhaps literally, as well as figuratively, with the reflecting pool, and definitely the latter with other plans that have either broken ground or are on the blueprints. 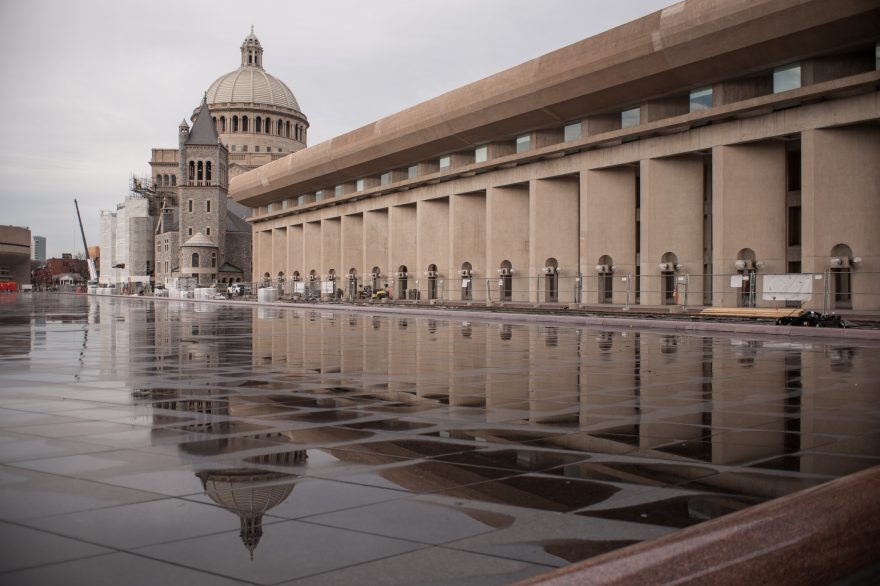 With the planning for the plaza’s redevelopment ongoing for some 15 years, Herlinger and other church officials have nurtured good relations with the community, and that includes meetings with the St. Botolph Neighborhood Association, a close-knit residential community nestled between Boston’s South End and Back Bay, with Fenway Park not far away.

“One of the terms that I’ve coined is logistical harmony,” Herlinger says, adding that he and his colleagues meet regularly to make every effort not to interrupt pedestrian and traffic flow.

Such an accommodating approach can mean scheduling deliveries and some procedures during off-hours. Still, there’s rarely a time when this part of Boston isn’t humming with some activity.

Down one end of Mass Ave., there’s Boston Medical Center. Up the other end, there’s the Berklee College of Music and the route into Cambridge. That calls for some very sensitive planning, and it won’t end after the reflecting pool is complete. It’s just one part of redevelopment that’s been in progress since the early 2000s.

In an effort to consolidate office spaces, a 25-story Christian Science Plaza building has been ground-leased and an adjacent parcel of land was sold to Carpenter & Company, Inc., which is building a 60-story structure that will include a Four Seasons Hotel and luxury condominiums.

“We hope those tenants and their customers will feel welcome on the Plaza, as well as experience something transformational,” Herlinger says. “Every 40 or 50 years the church does a major gesture on this site. This is that special moment, not only for the church but for the community.” 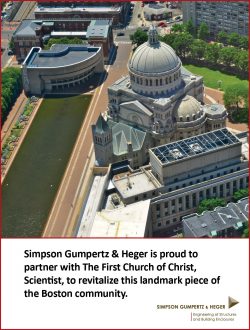 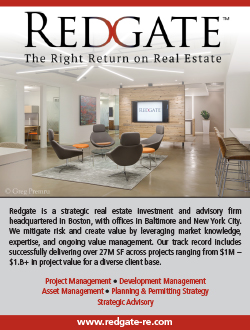 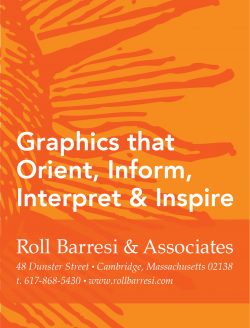