After a long day of classes or a long night of studying, everyone needs a break.

So close the book, power down the laptop and head on over to the student center, maybe after ordering by app at Chick-fil-A or Panda Express. Your food is there, your friends may be, too. 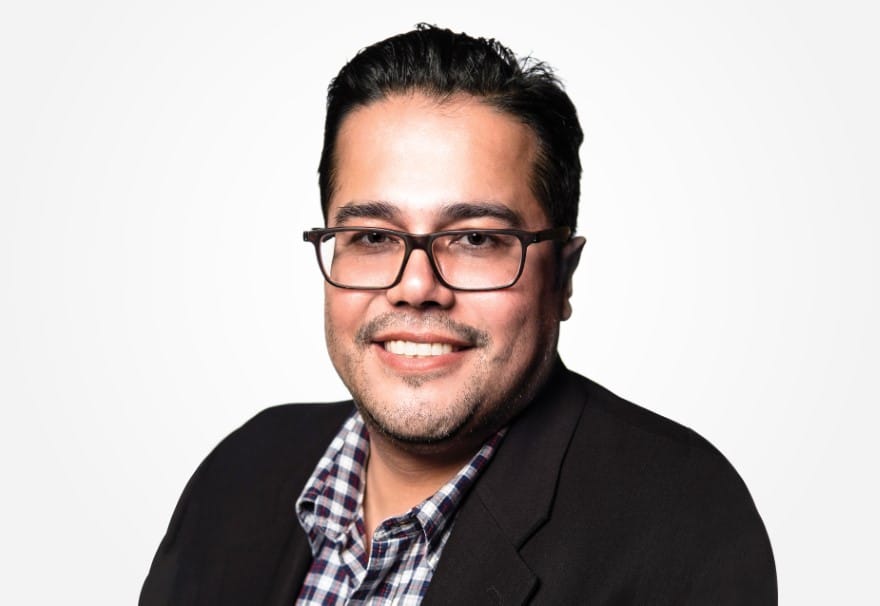 Rigoberto “Rigo” Sanchez knows you can get hungry and as director of design and construction for the Compass Group, he’s instrumental in helping students calm those hunger pangs in modernized settings.

“I love to cook and the thing I love about this job is it’s like having a set list of ingredients and figuring out how to combine them,” Sanchez says.

Compass is the world’s sixth largest employer and the leader in food and support services management, Sanchez says. From school cafeterias to residential dining halls in higher education as well as hospitals, corporations and sports arenas, Compass designs the kitchens and settings and brings in the partners to serve all kinds of tastes.

These are not your parents’ dining halls. 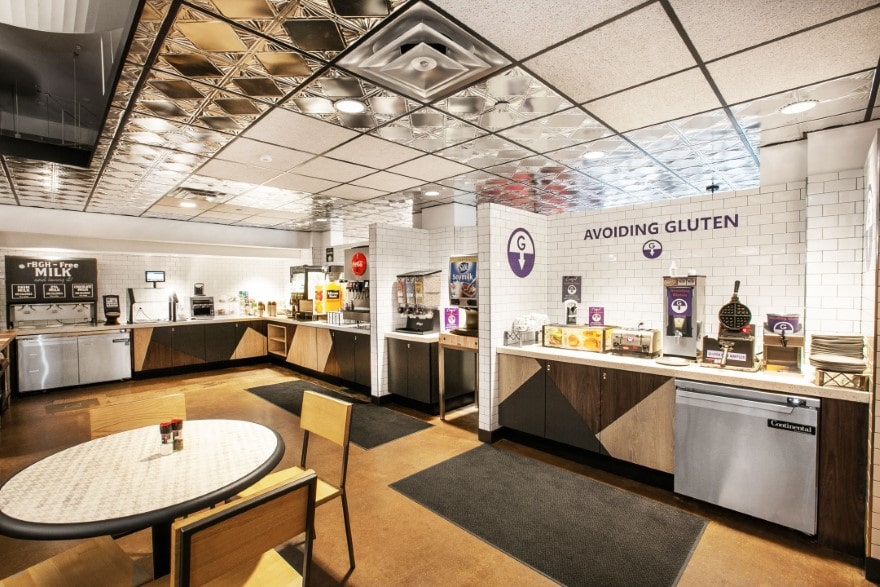 “I wish some of the stuff I’m bringing to life was around back then,” Sanchez says.

While some of the changes are practical—heat lamps for keeping meals warm and expanded seating, for example—other improvements are socially motivated. For instance, food prep areas in Northwestern’s Elder Hall were made visible to students and staff through glass walls.

“We’ve been taking the shroud off food prep and production,” Sanchez says. “It’s like food theater. We’ve created the action platform to show how things are produced.”

“Glass is the new drywall,” says Christopher Collins, the owner and principal of Nvironment, a design and architecture firm in Columbus, Ohio, that works with Sanchez from design and planning through construction. That may especially apply to areas where kosher means are prepared, or where students are managing food allergies. 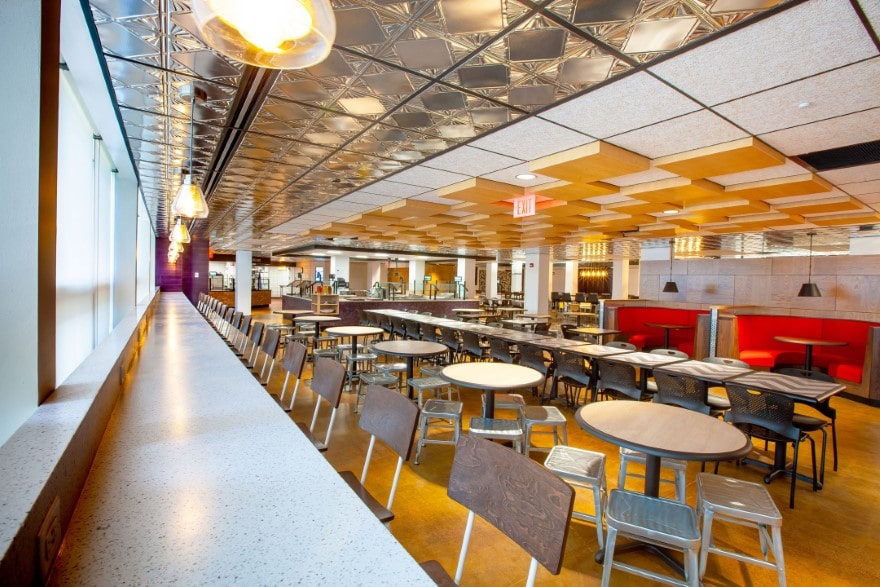 The open atmosphere also results in a sense of placemaking—using the setting to create an environment, such as the rathskeller feel in the lower floor of the Elder Hall dining area, he adds.

“He’s really communicative and transparent,” Collins says. “You don’t feel like there’s any hidden agenda with him and you definitely don’t sense this is just a job for him.”

The $3.3 million project, completed in 2019, adds some staples to cure anyone’s munchies—Pizza Hut, Panda Express and Chick-fil-A are there, and Simply Puur offers salads, grain bowls and smoothies.

And then there’s the moveable feast part.

“We wanted to give students a voice, so the food court also has rotating restaurant. It began with Tu Taco; next is a restaurant serving spicy chicken sandwiches,” he explains. 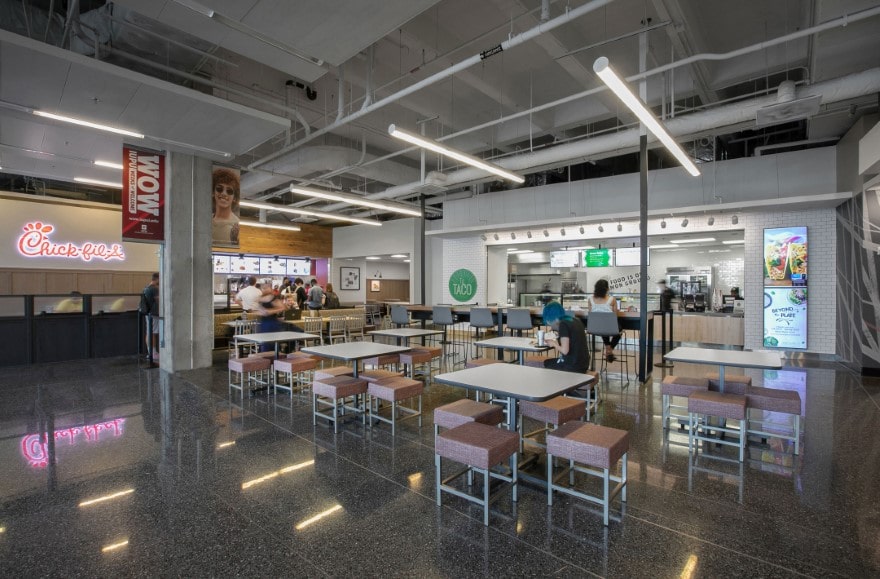 In the food court collaborations, Sanchez works on implementing design ideas that show the food service in areas such as online ordering and upgraded tech in the kitchens.

“They have to improve the execution of more customized orders they are cooking while in the same or smaller spaces,” Sanchez says, adding on-site ordering kiosks are fast becoming fixtures in the restaurants.

Jacob “Jake” Warm, the CEO and chairman of JDL Warm Construction LLC, says the project was not an easy one because the food court did not fully close while the project was going on.

“We did have the pleasure of working with Rigo, though,” Warm says. “He’s the consummate team player.” 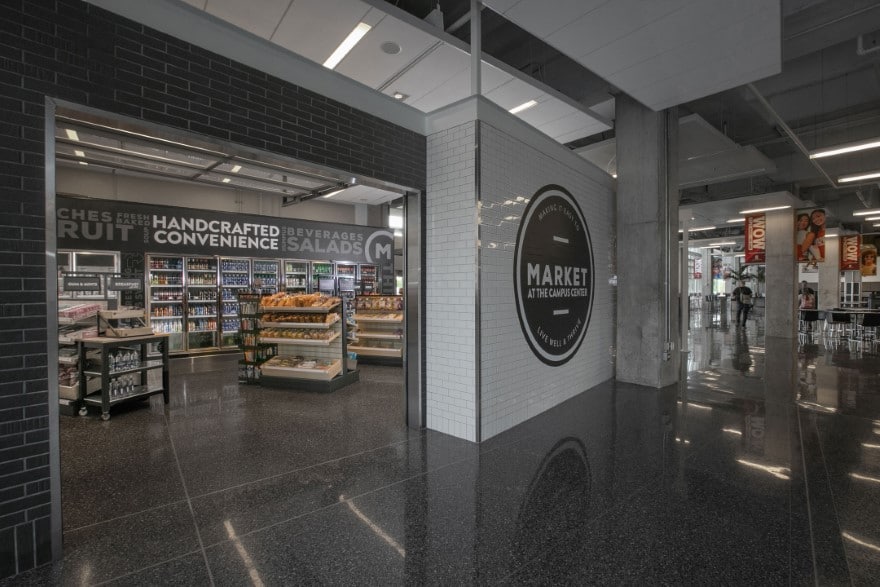 “There were four phases to the overall food court renovation and the start of each new phase was dependent on the completion of the last,” he says. “Plus, we had to avoid interfering with the students and staff as we worked.”

While companies such as Starbucks and Chick-fil-A are commonly found in Compass-designed food courts, Sanchez also adds local flavors into the food mix and décor. In Memphis, there will be barbecue and in New Orleans, the fleur-de-lis and Mardi Gras themes will be visible.

Achieving successful, even flavorful results comes from teamwork with partners like JDL Warm and Nvironment, Sanchez adds, because they share similar views on the science and art of food service.

Delivering these many options within budget is challenging, Sanchez notes.

“You’re only as good as your last project. There’s an ever-moving benchmark,” he says.

Before joining Compass Group, he spent almost a decade as the principal structural engineer and senior lead for McDonald’s. Designing a McDonald’s is less a cookie-cutter process than it had been, Sanchez says, both because of local zoning and because the franchise locations were often put in retrofitted urban spaces or unique sites. 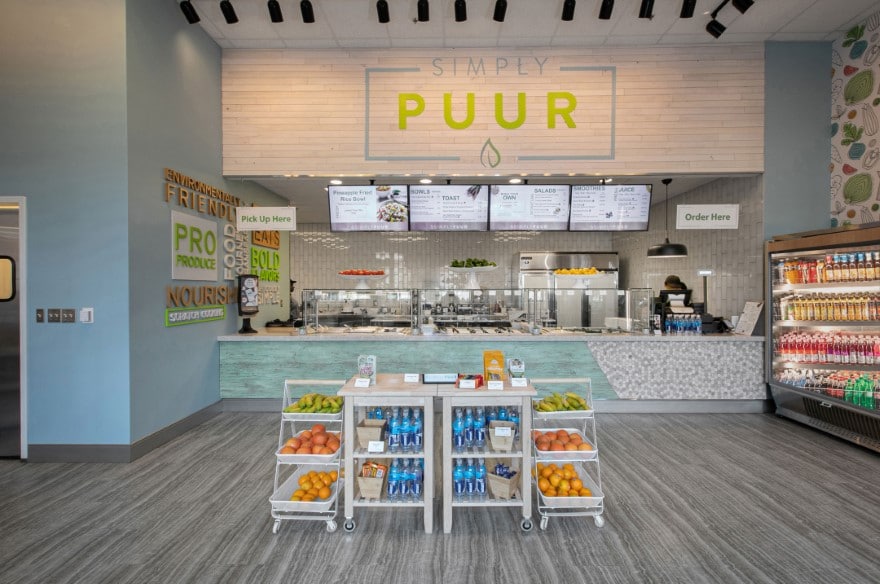 “This offered me a chance to grow in different directions,” he says. “I can build an infinite number of kitchens for each setting.”

A native of Chicago, Sanchez stayed for college, earning his bachelor’s in architecture from the University of Illinois at Chicago. He’s also temporarily lived in Houston and New Orleans, and travels extensively for Compass.

“I’ve always been in construction,” Sanchez says. “My father was a carpenter foreman, a residential general contractor and my role model. I saw his successful blue-collar career and I knew I wanted to be in construction. So I went and got an architecture and engineering degree and got licensed as well.”

“In most every profession you can say there is a science and art to everything,” Sanchez says. “My job is my hobby. There’s a lot of emotions tied to it.” 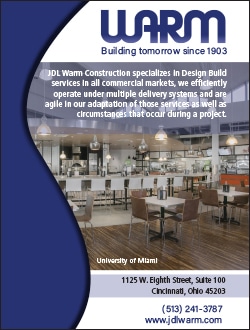 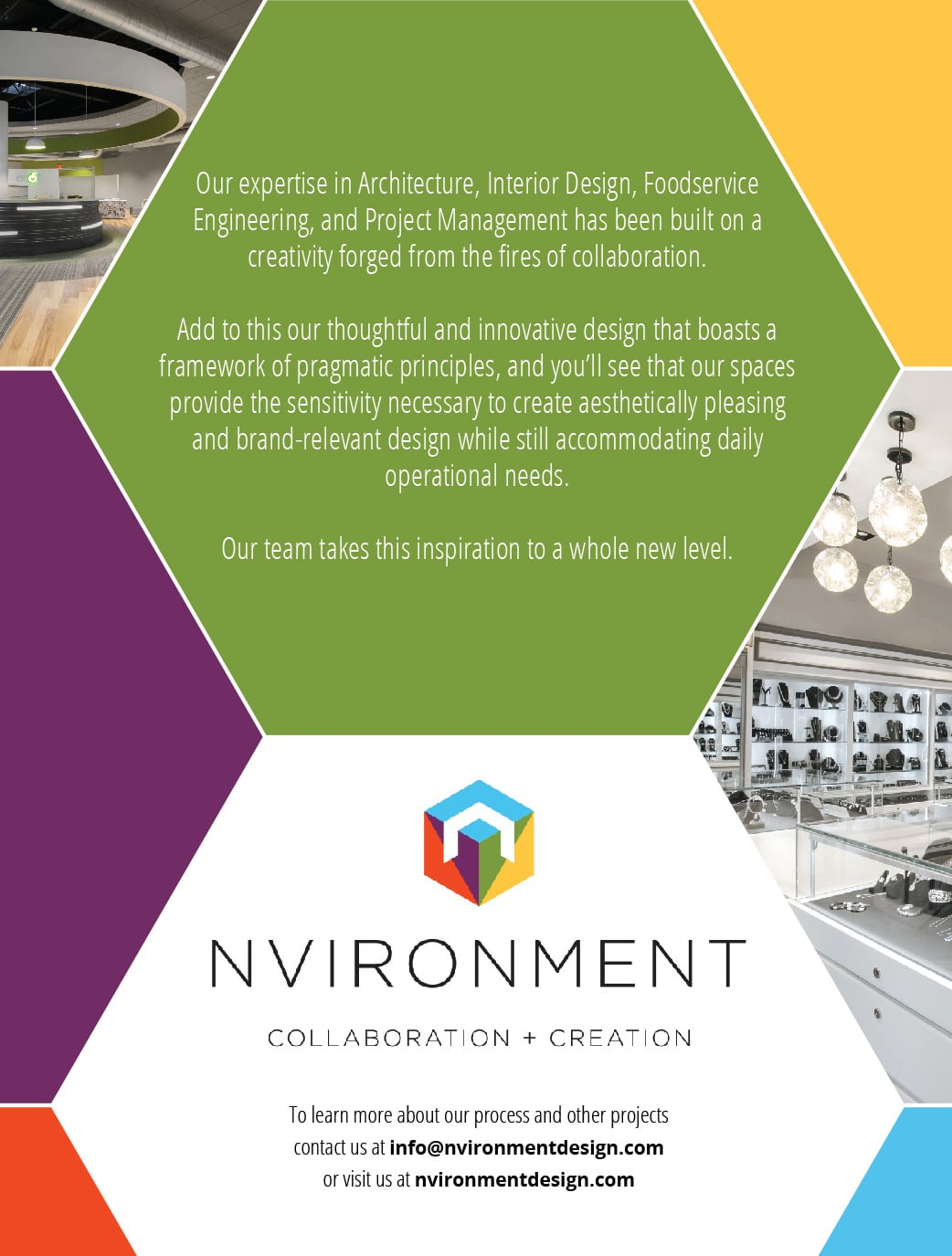