It might be the finest residence in very exclusive Fisher Island: The 5100 Bayview Avenue condominiums, whose listings this past May ranged from $1.99 million for a two-bedroom unit to $10.5 million for a place that sleeps five.

Mediterranean in style with white exteriors and red-tiled roofs, the high-rises line the perimeter of the wedge-shaped, manmade island just over one-third square mile in size. There, that isle sits like a mirage, three miles offshore from metropolitan Miami, a marina jutting in, a nine-hole golf course in the middle, and peacocks strutting about without fear of predators that they’ll never encounter here. 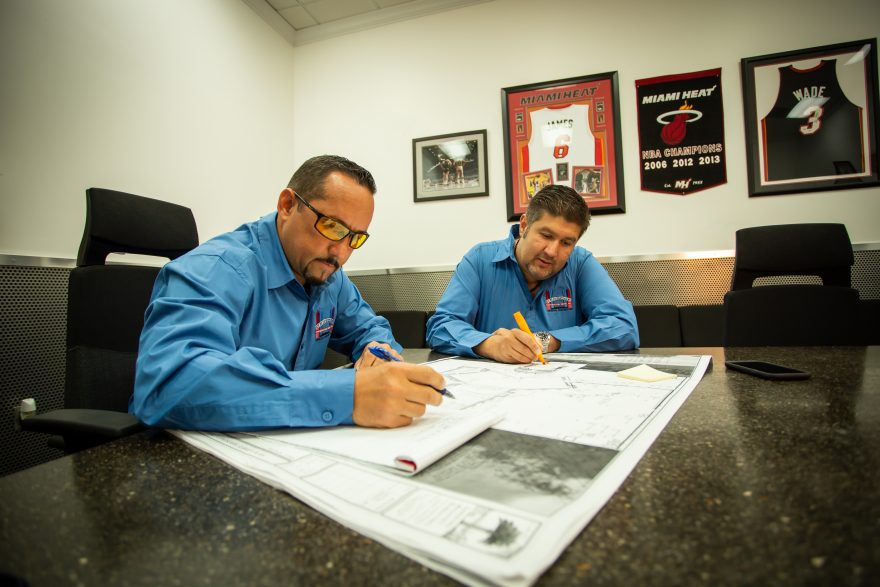 Discerning folks to be sure, those denizens of 5100 Bayview, and how they value their little slice of paradise, there being no causeway between the island and the mainland. Getting to and from necessitates a boat or helicopter.

Or a construction barge, if you happen to be the contractor entrusted with keeping those condos in mint condition.

Which is how Restore Construction Group Inc., has been arriving early in the morning since taking on another long-term and high-stakes project in April. A Broward area company, well-versed at maintaining some of the Gold Coast’s most iconic residential and hospitality structures, Restore was a natural choice to service 5100 Bayview, the company having come through on previous occasions for other constituents of the Fisher Island faithful, logistical issues notwithstanding.

All in a day’s work

“One of our biggest challenges is just the access to the island,” says Norge Arnaiz, since 2006 the managing partner of Restore, along with longtime friend and co-founder Juan Castro. “You’ve got to time your operations. Miss the barge and you might wait another 30 minutes, and time is money when you’re in the construction business.”

Arriving on the island, the Restore crew faces a slew of other challenges. The tiled roofs call for the most precise rigging before anyone can commence with the many procedures necessary to keep 5100 Bayview sparkling. 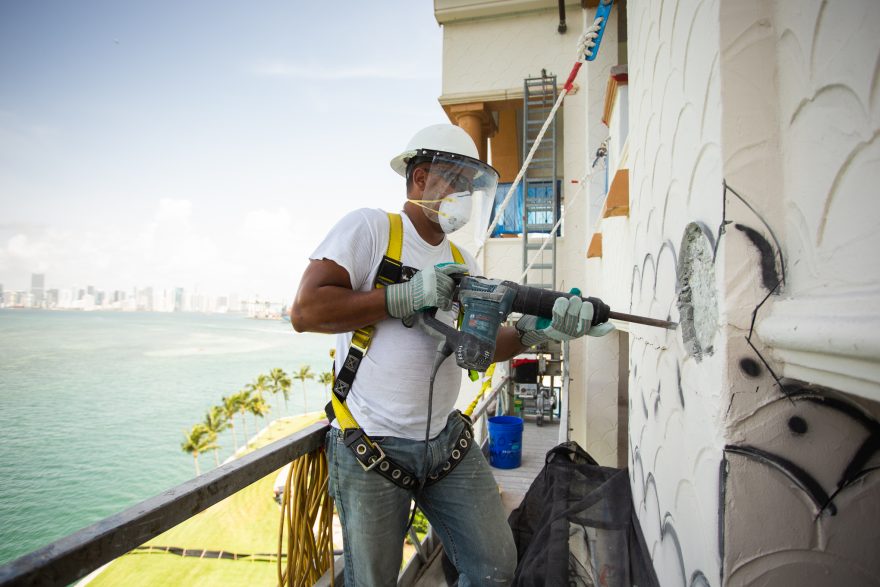 Every seven to 10 years calls for major maintenance of the big buildings in this region of intense sun and storms, Arnaiz explains. Concrete takes a pounding, but Restore does as its name suggests, its expertise including concrete restoration, post tension repairs and carbon fiber reinforcing.

Waterproofing is another must, with decks needing recoating and cracks calling for routing and sealant. And far more than just aesthetics are involved when it comes to painting. There’s pressure cleaning, electrostatic and epoxy coatings, caulking and sealing, and replacement of windows and railings.

And the work had better be done to specification. A contractor’s reputation spreads, and on Fisher Island, maybe faster than in other locales.

“This is a very exclusive clientele,” Arnaiz reminds. “But having done four other towers on this island, we have learned how to cater to them. We give them the white-glove treatment and they show their appreciation by asking us back.”

As do many other equally high-profile clients.

Any top 10 list of the classiest hotels in South Florida is likely to include The Diplomat Beach Resort in Hollywood, and probably nearer the top than bottom. The “newly transformed Diplomat,” as the hotel now identifies, with much credit due Restore.

For right about the time Restore was commencing with 5100 Bayview, the contractor was close to wrapping up another project at The Diplomat. Those renovations may have demanded even more precise timing than waiting for the Fisher Island barge, the Diplomat being host to a thriving convention business that called for Restore to juggle its work schedule. A very reasonable 18 months later, the major work was all but complete. 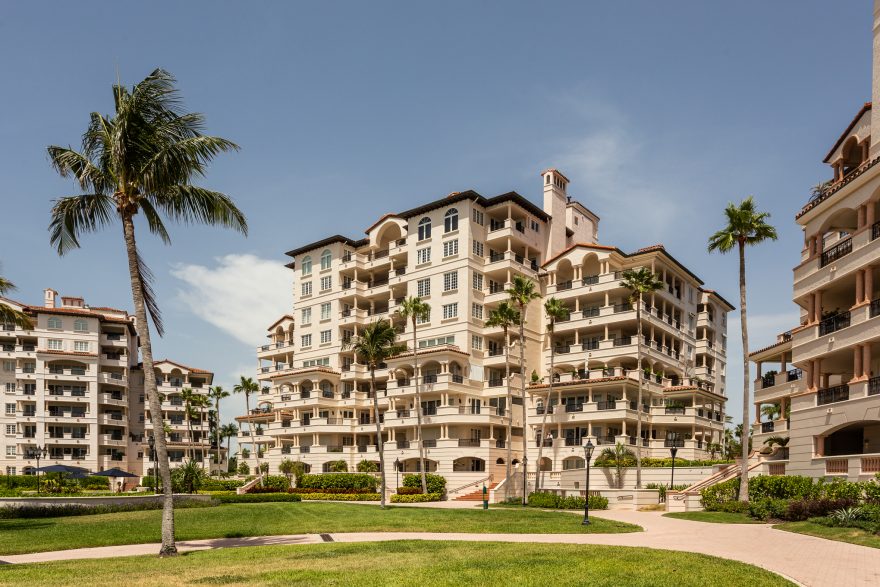 “That’s our bread and butter,” Arnaiz says in regard to such renovations. “We don’t build, but we take what’s there and make it better. It’s very satisfying to know that a historic or iconic property is going to be around for others to appreciate long after we’re gone.”

Other brands in the Restore clientele include Marriott, Wyndham, Hilton and Kimpton.

It’s a strong partnership, the Cuban-born Arnaiz and Honduran native Castro, with each man’s skills complementing the other’s. Both learned the trades from their fathers, Arnaiz’s dad being a plumbing contractor who did well after bringing the family to Florida.

But painting, not plumbing, was what Arnaiz gravitated toward, and he had his own business when just 16, evolving from residential to small commercial work and then to shopping centers, warehouses, midrise condos and then the big-ticket buildings. 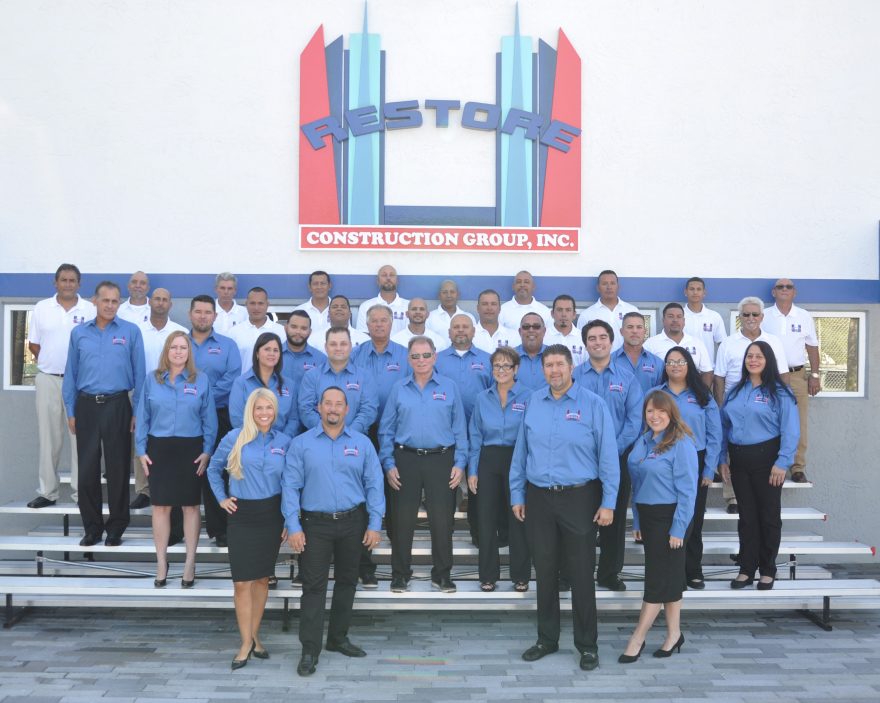 Castro’s dad was in the concrete restoration business, and that’s where young Juan acquired his on-the-job training. Like Arnaiz, he leads by example.

“It’s the best way,” Arnaiz says. “When you show you’re physically able to perform the work, others respect you. You’ve got to know the business from the ground up.”

One of his sons seems to be well in the process, Arnaiz says, explaining that the young man is at the sites and quickly learning about painting, waterproofing and concrete restoration. Another son is studying accounting at Florida International University, and might be joining the team post-graduation.

There should be plenty of work to do as the stronger economy enables hotels and condo boards to proceed with big capital projects that may have been sidetracked during the Great Recession, which struck just a couple of years after Arnaiz and Castro founded Restore. Conditions forced a scale-back, but since then it’s been all systems go—albeit prudently.

A dozen years since its inception, and with a most exclusive clientele, Restore seems built to last with $25 million in annual revenue, a 300-plus workforce and a reliable team of subcontractors for the ancillary projects outside the company’s core services of concrete restoration, painting and waterproofing.

While growth is welcome, Arnaiz and Castro will focus on internal efficiency before risking being stretched too thin. “Optimize before you maximize,” Arnaiz advises. 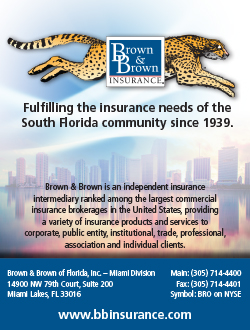 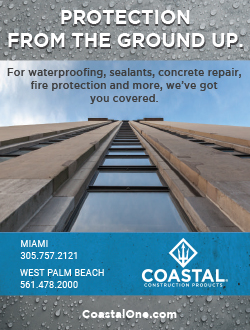 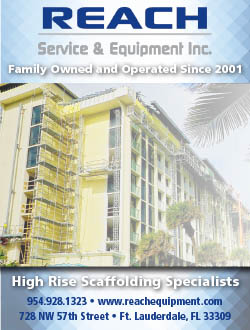 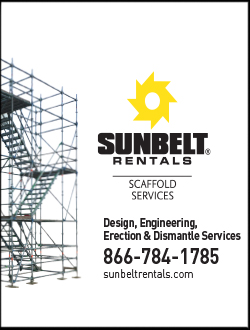 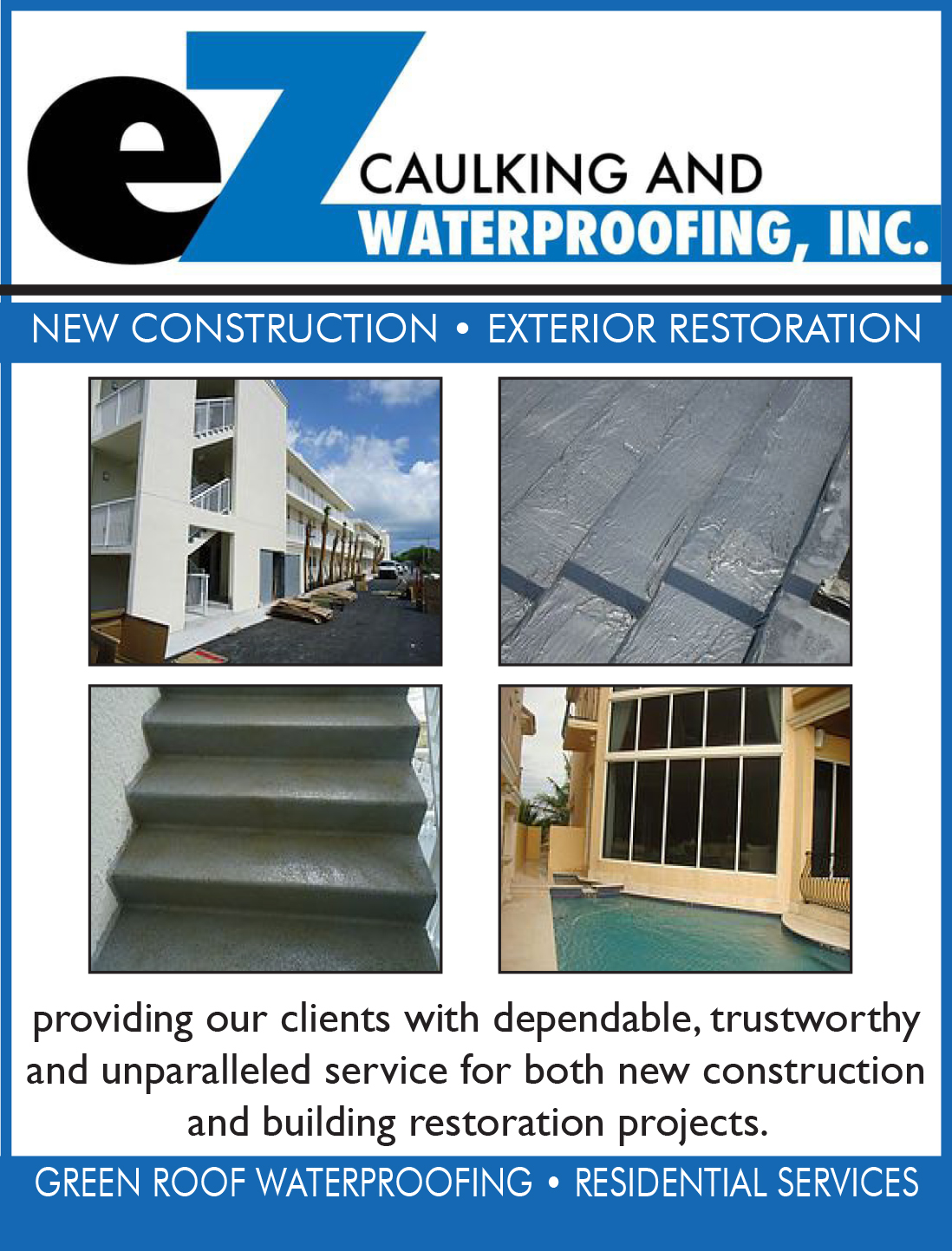 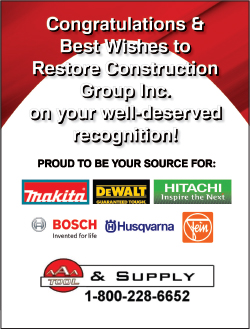