Aesthetics, efficiencies in the grand design

While there’s no substitute for a real-life casualty to test the capabilities and temperaments of first responders and medical personnel, the University of Arizona in Tucson can offer the next best scenario. 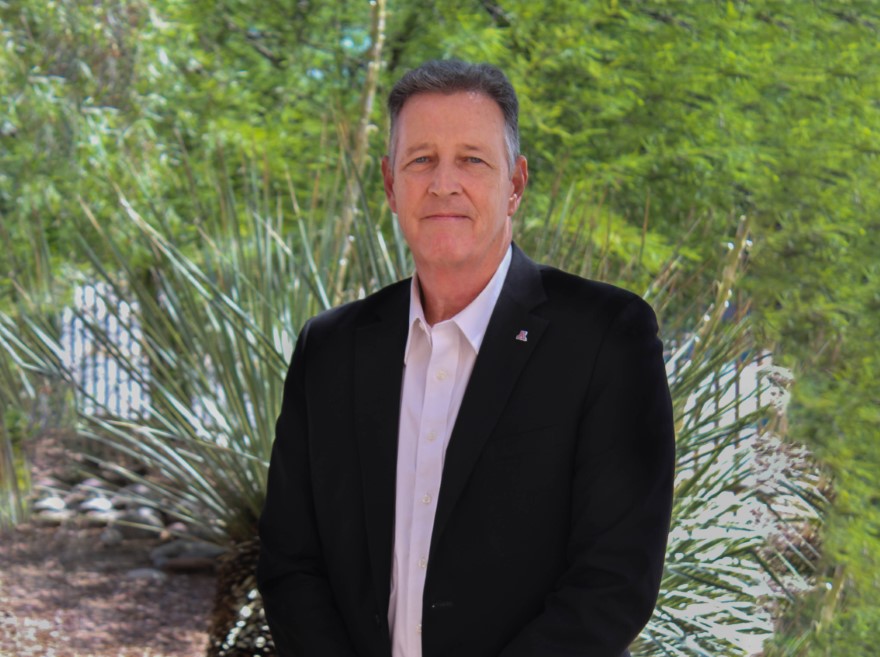 It may not be for the squeamish.

You’ll find it on the seventh floor of the Health Sciences Innovation Building. Opened last year, the facility immerses students, first responders and medical professionals in realistic depictions of everything from single-case emergencies to mass casualties. Known as the SimDeck, this part of the Arizona Simulation Technology and Education Center includes a two-story soundstage and training environment with multiple reconfigurable rooms.

“Like no other,” says Peter Dourlein, who, as the university’s campus architect and assistant vice president of planning, design and construction, oversaw the team responsible for the building’s completion. “Where a helicopter crash or other large-scale disaster can be experienced in as realistic a model as practically possible. It’s an awesome way to learn under realistic conditions how to treat patients in the field.” 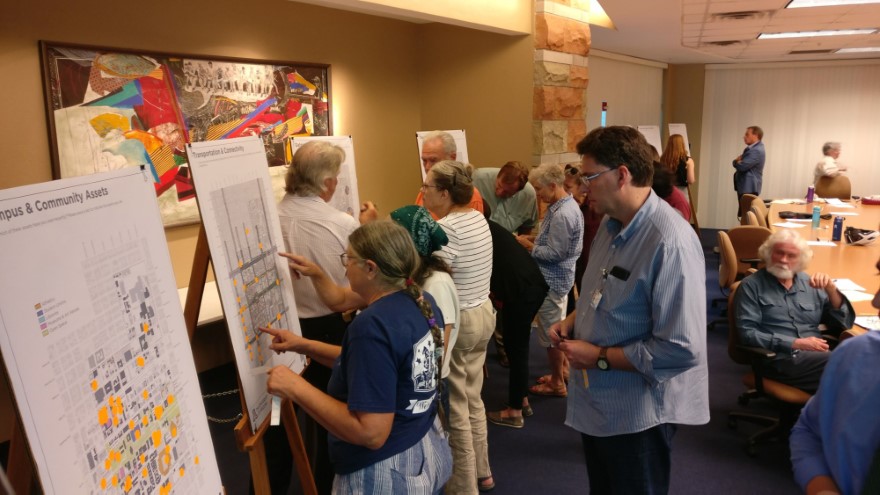 It’s here where students triage and tend to high-tech mannikins—they can breathe and bleed, their eyes can dilate and they can simulate reaction to trauma—while their performance is monitored from an adjacent control room. There’s also a 3D printing and artificial tissue laboratory that grew from a partnership between the colleges of engineering and medicine. The other eight floors of this $165 million facility have their own specific functions, comprising what Dourlein calls “the heart and lungs” of the university’s health-related professions curriculum and facilities. There’s space for collaboration and for privacy.

Disturbing as the scenarios on the seventh floor may be, everything takes place in a handsome rectangular building. Measuring nine stories and 220,000 square feet, its two long sides were inspired by the saguaro cactus, that iconic Arizona species noted for prickly, curved branches that reach upward like arms from a tall, thick and equally prickly trunk. The saguaro trunk and arms can reach 60 feet and have pronounced ribs which shade the in-between recesses that aid the cactus in surviving hot, dry summers.

Same principle applies with this building, as long, narrow, earth-toned terracotta ribs extend from the second floor to the ninth, shading recessed slots of glass to reduce heat gain and the cost of air conditioning. Three 21-foot-tall glass garage doors can open the entire south wall, creating indoor and outdoor space on many days in the temperate seasons. Floor-to-ceiling glass windows on the ninth floor darken when exposed to sunlight. 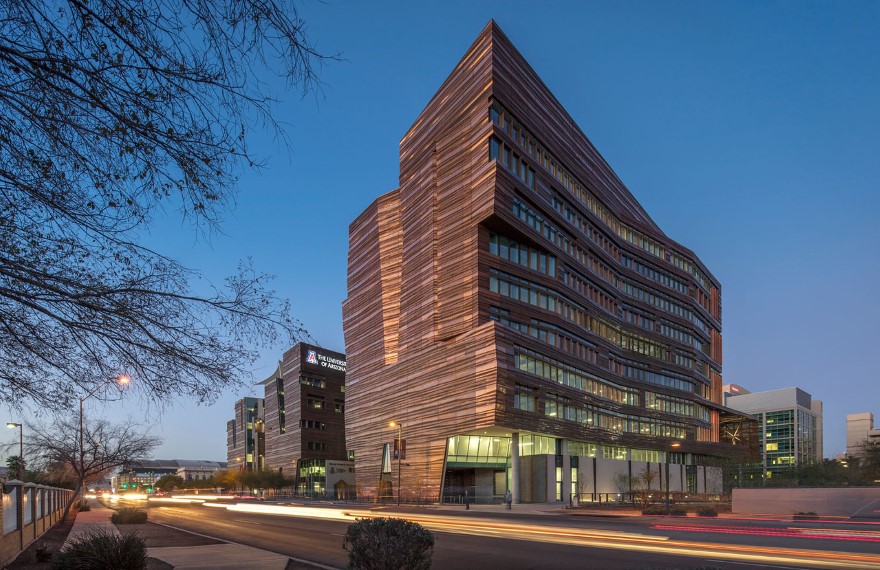 There are still a few fill-ins to complete, but the building is essentially in full operation, and Dourlein has a couple of other major projects pending.

This being a Research 1 university—one of 131 nationwide—plans call for two more buildings, each around $100 million: one for applied research; the other for researching the grand challenges of our time. The new structures will complement the Health Sciences Innovation Building as well as the rest of the scenic campus with its mountainous backdrop.

“Each building isn’t a function of its own,” Dourlein says, introducing his interviewer to the term dendrochronology—the farther one gets from the center, one finds that the context shifts from the historic core to a more contemporary setting, like the interior rings that mark a tree’s age. “We’re taking the most holistic approach where context includes both time and place and buildings frame open spaces that create a dynamic and cohesive campus.”

The most long-term, cost-effective approach too, he adds.

Circumstances compelled Dourlein and his team to entrust the Health Sciences Innovation Building’s design to a California architectural firm and the ground-up construction to locally based Kitchell Construction. However, when conditions dictate, the design-build process can also be effective. The university has taken project delivery to a new level—one that attracts the best teams who collaborate in creating facilities that inspire and stand the test of time. 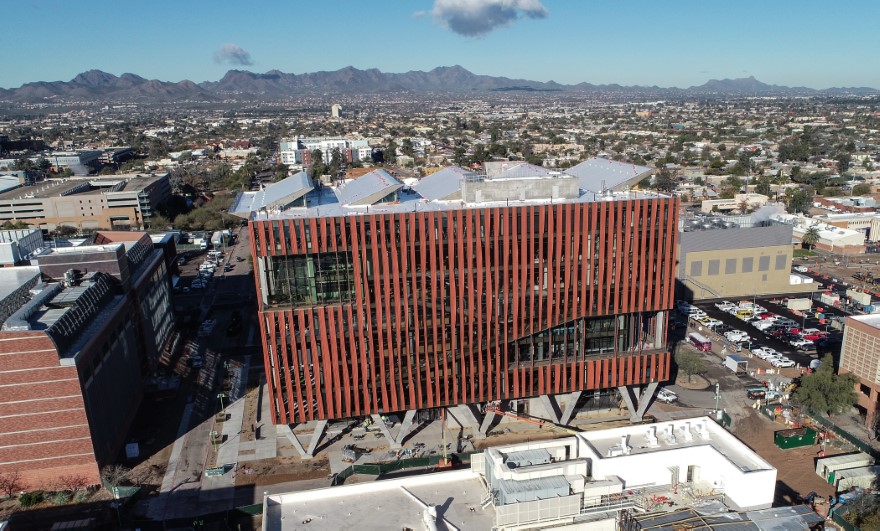 “We were early adopters of the alternative project delivery that’s not so alternative these days,” he says.

Through this approach, best value is achieved through collaboration—obtaining constructability, estimating and value engineering input from the construction team in real time, getting low qualified bids for trades, and fixing a guaranteed maximum price prior to construction being authorized. 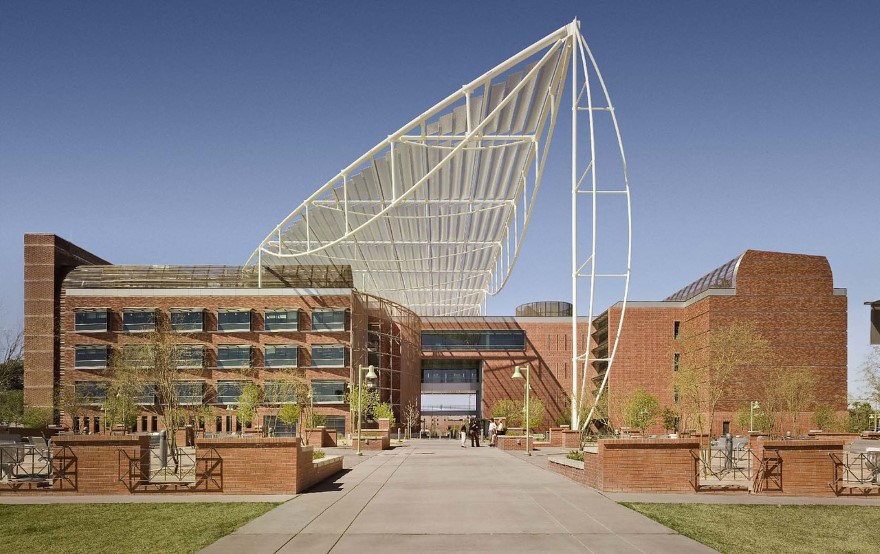 “Design-build also works better than selecting a general contractor on low bid alone,” Dourlein explains. “We’re able to select top-ranked teams all under one contract, rather than have separate deals with the architect and builder. This way we avoid the shotgun wedding. We’re all partners and if someone falls down—the architect, the general contractor, a subcontractor—we’ll pick them up, dust them off and cross the finish line together.”

Of COVID and construction

Those efficiencies notwithstanding, he acknowledges the university isn’t immune to construction industry realities. Even before COVID-19 disrupted projects, they were enduring a skilled-labor shortage that was pushing up costs. While the construction market now seems strong, it’s still reactive in the sense that project design precedes ground breaking. Design professionals now seeing a tightening up of projects moving forward, and Dourlein suspects that could mean longer delays and perhaps fewer projects getting to construction for the immediate future—and greater cost volatility. 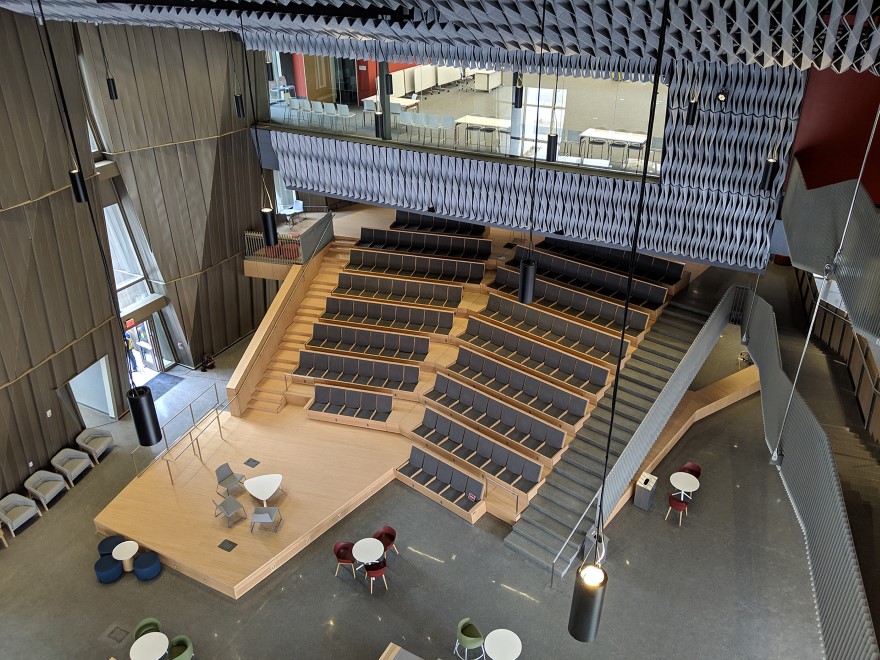 But he intends for his team to keep the school’s projects moving forward and, as summer neared fall, was also hoping for some semblance of normalcy as the university—and practically every other higher-education institution—deals with the pandemic.

“The university experience should be about learning as much outside the classroom as inside,” he says. “It’s so beneficial to meet people from different cultures, different backgrounds and who speak different languages. It’s not about being sequestered in a single program.”

That said, four teaching methods are being fine-tuned: face-to-face, online live, online recorded and hybrid. The last three could be especially challenging for those science-oriented students whom his team has so focused on. There’ll have to be some way to get them back to the labs. 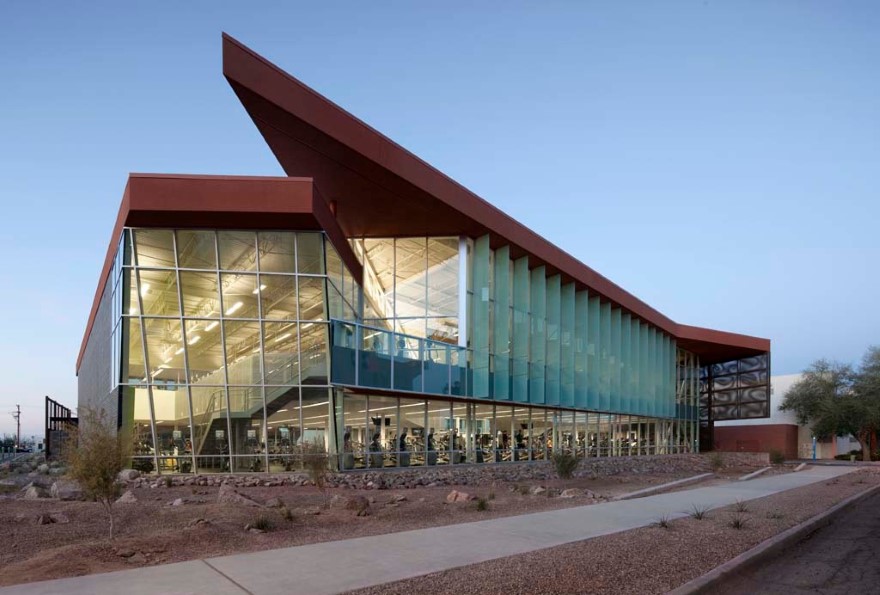 And how he can empathize with today’s students.

Himself an architectural alumnus, Dourlein has been with his alma mater since 1991, returning after a decade of running his own firm, Bright Dourlein Architects Inc. Starting off as a senior architect, Dourlein was soon promoted and in time earned his current position, and after nearly three decades on the job, retains his passion.

“This is a living, breathing university and I’m proud to be an alum,” he says. “I work with awesome people, and we stand on the shoulders of people who came before us. We’re stewards for a period of time. What we do today has implications for many years down the road. We’re not just about working with bricks and mortar. We’re people first.” 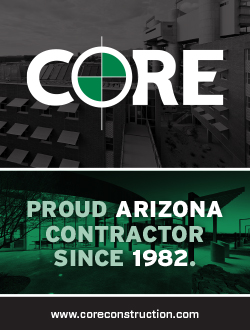