It’s not unusual for anyone entering a bank to be thinking green—cash, that is. But Olivia Karavatakis wants them thinking green in another context. As vice president of facilities management, she’s considering how the bank can operate sustainably. 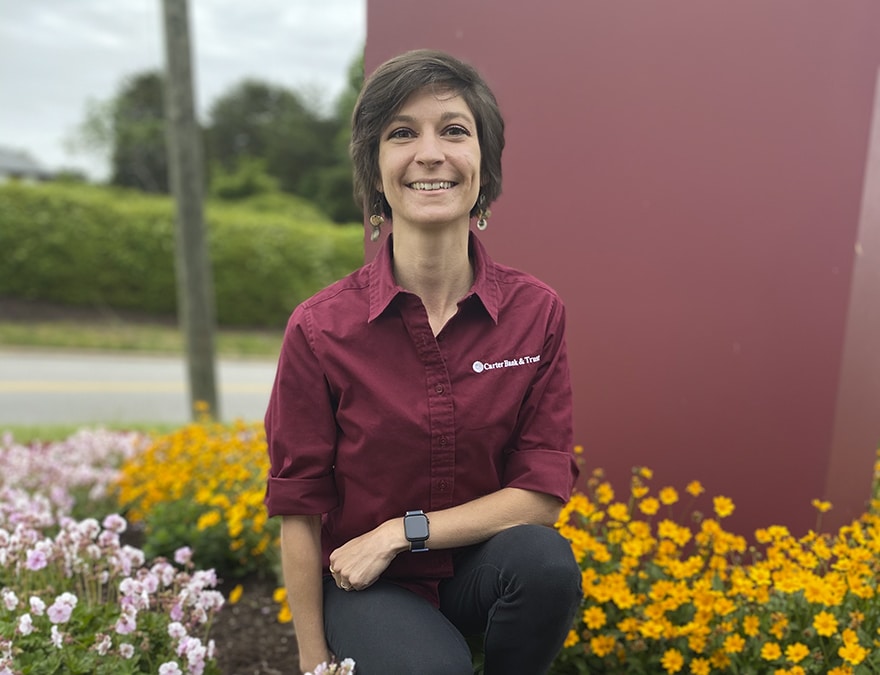 From energy-efficient HVAC and lighting to more rain-absorbent landscaping that prevents flooding, Karavatakis sees many ways the bank’s branches can become more environmentally friendly. Not only that, she says these efforts that can create savings by reducing energy costs.

“I want people to understand how easy it is to be energy efficient, sustainable and to create a happy and healthy workplace within their own businesses,” she says.

Carter Bank & Trust is now headquartered in Martinsville, Virginia, with $4.1 billion in assets and 70 branches in Virginia and North Carolina. As Karavatakis chatted with Blueprint in late May, she was helping put the final touches on a new branch in Greensboro, North Carolina.

She says steps to sustainability can be easy—but the magnitude of doing so in 70 branches as well as corporate headquarters? Not so much. She had begun working with the bank as a consultant with Chattanooga, Tennessee-based EnerG3 as it helped Carter Bank & Trust reduce its utility bills with LED lighting retrofits. 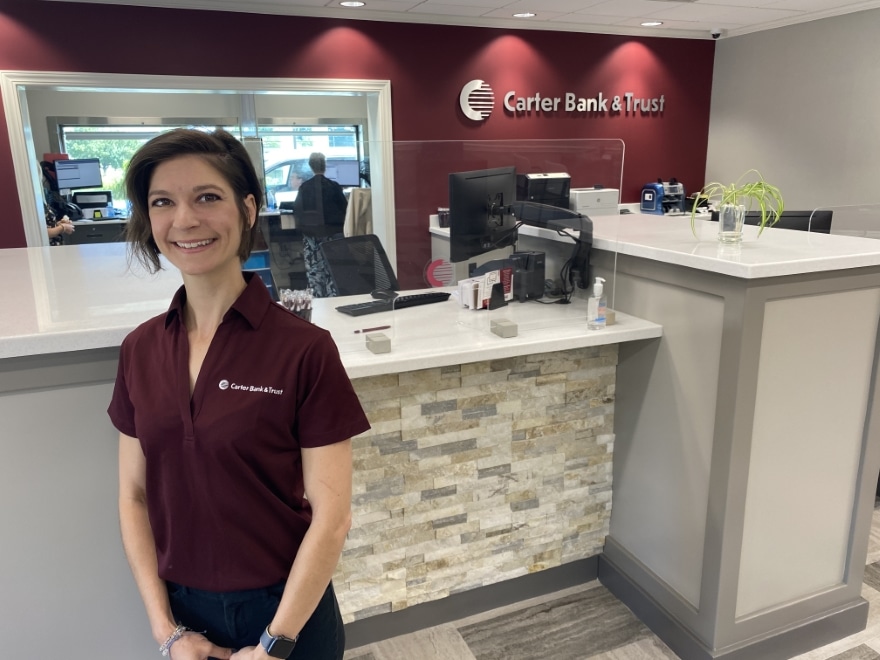 Replacing fluorescent and high-pressure sodium lights is ongoing and one of the most beneficial projects from cost and environmental perspectives.

As she explains, LED lights require less wattage and last longer. Most are rated to burn nearly 50,000 hours, equivalent to more than 20 years at eight hours of burn time a day and have five- to 10-year warranties. After three years of LED retrofits, 40 branches are completely done, and others are partially changed over. Meanwhile, the bank has reduced its energy costs by nearly 23 percent, Karavatakis says.

Breathe in the air

Replacing heating, ventilating and air conditioning systems has been even more involved. Some 42 units have been changed over in the past two years.

The replaced units were worn out and used R-22 coolant, fully phased out by the U.S. Environmental Protection Agency in 2020 because of environmental concerns, including depletion of the ozone layer. Though the new HVAC systems are more efficient, Karavatakis says the replacement process can also require rerouting air circulation ductwork to comply with updated building codes.

Two HVAC units per branch are typically needed. They’re equipped with automatic thermostat controls, ensuring buildings aren’t getting heated when they should be cooled. The new HVAC units are equipped with iWave air purifiers that reduce pathogens and other airborne particles, she adds.

At one of the Carter Bank & Trust corporate offices, the HVAC system was designed for a factory setting, not small offices and suites. It was replaced by five smaller units and redesigned duct work to better direct airflow. The replacement cost more upfront but reduces utility and maintenance bills and employees are more comfortable, Karavatakis notes. 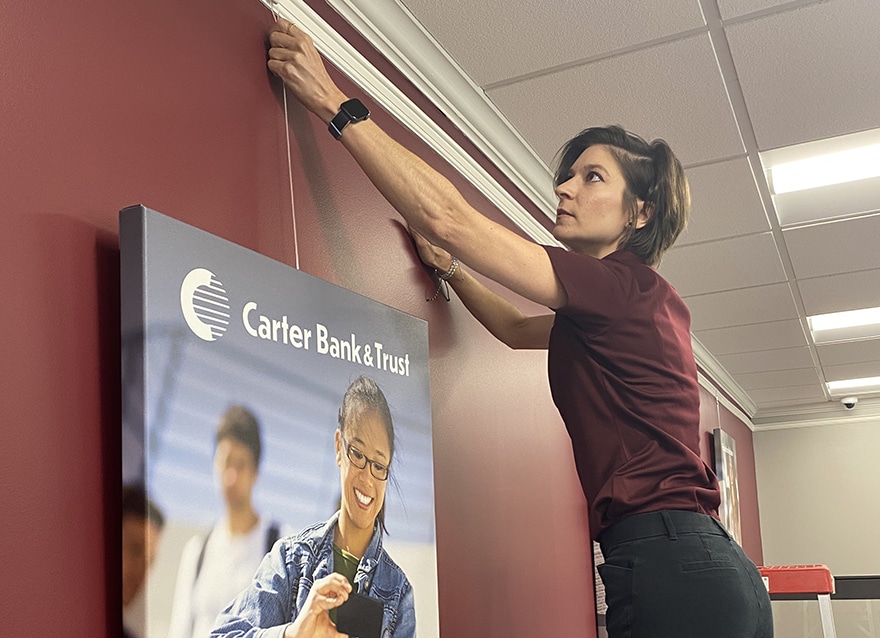 In taking on the scope of changes, she says Southern Air of Lynchburg, Virginia, has been indispensable for its expertise in design and execution of retrofits and upgrades. “I’m learning new things about HVAC every day. I need them to tell me what we can and can’t do,” she says, adding Southern Air also performs preventive maintenance services on HVAC units each spring and fall.

Look out any window

The landscaping is being redone, as well. Impervious surfaces on parking lots contribute to water pollution, as stormwater carries contaminants and oils from them into drains, Karavatakis explains. The drains and streets can also become inundated, contaminating drinking water if connected to wastewater treatment plants.

Rain gardens—“big holes” that have been backfilled with soil and sand, then topped with native plants that are also pollinator friendly, are a natural remedy, Karavatakis adds. The plants are pretty, bees love them, and underneath is a natural sponge that slows the flow of stormwater by absorbing it naturally into the groundwater system.

“It’s so easy and is general commonsense that sometimes people don’t really understand how easy it is to make an impact,” she says.

Making an impact has been her goal since Karavatakis earned her bachelor’s degree in construction management from East Tennessee State University in 2009. Doing so in her own backyard was not always part of the plan, though. 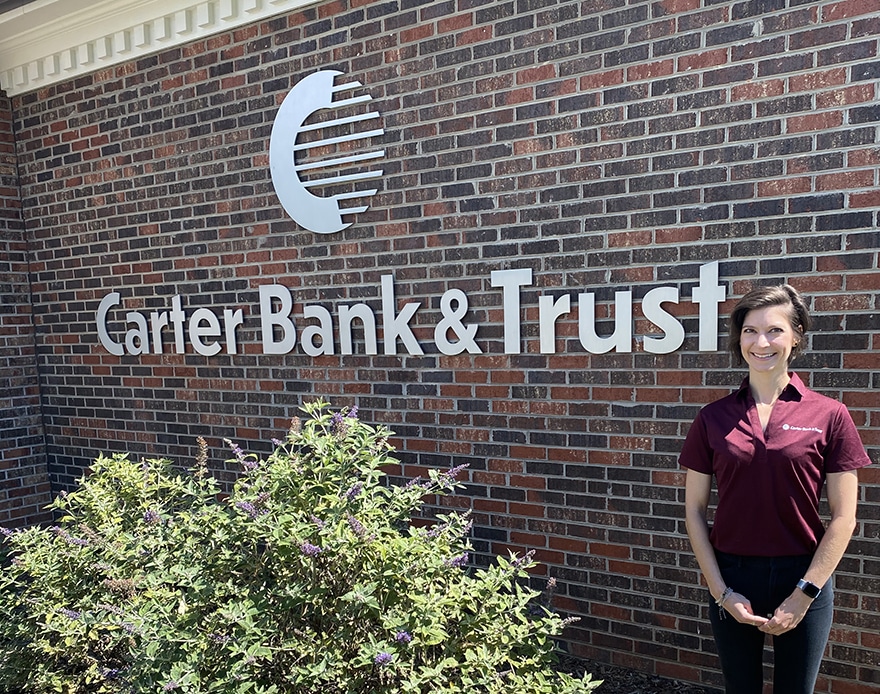 The construction industry was not in good shape when she graduated because of the Great Recession, but she went door-to-door at every general contractor in Knoxville, Tennessee, until she found work as an assistant estimator for RTC General Contractors. In 2012, she became a pre-construction project engineer at Signal Energy, helping design and build utility-scale wind and solar farms.

In July 2015, she joined startup EnerG3, applying its energy analytics to her hometown bank, Carter Bank & Trust, as it began remodeling. Then, when the bank sought a facilities director, she realized her talents could be used full time to develop sustainability and energy efficiency programs. She joined the bank in 2019.

Sustainability is her passion—one that also benefits local vendors and tradespeople as she looks to hire locally first for bank projects, she adds.

“If we don’t start taking care of the planet and surroundings, our eco-systems won’t survive,” Karavatakis says. “I’ve always been focused and driven on what can I do to create change and make a healthier built environment.” 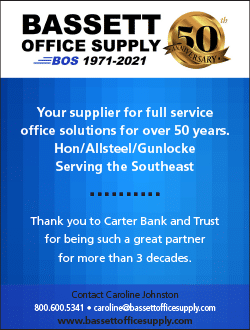 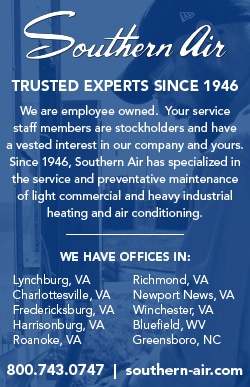