Many college alumni centers sit quiet and underused most of the year, only seeing large groups during reunions or special events. Nicole Sweeney has worked hard to ensure this wouldn’t happen at the University of British Columbia. Since the Robert H. Lee Alumni Centre opened in 2015, she’s been happy to see it consistently filled with students and alumni.

As the associate director of alumni facilities, Sweeney was involved in the design and opening of the center and now oversees its operations. While her background in venue management informs much of her work, being a UBC alum gives her added insight.

“I like keeping alumni connected to the university,” she says. “Being an alum helps me understand how to make the best decisions for keeping people engaged.” 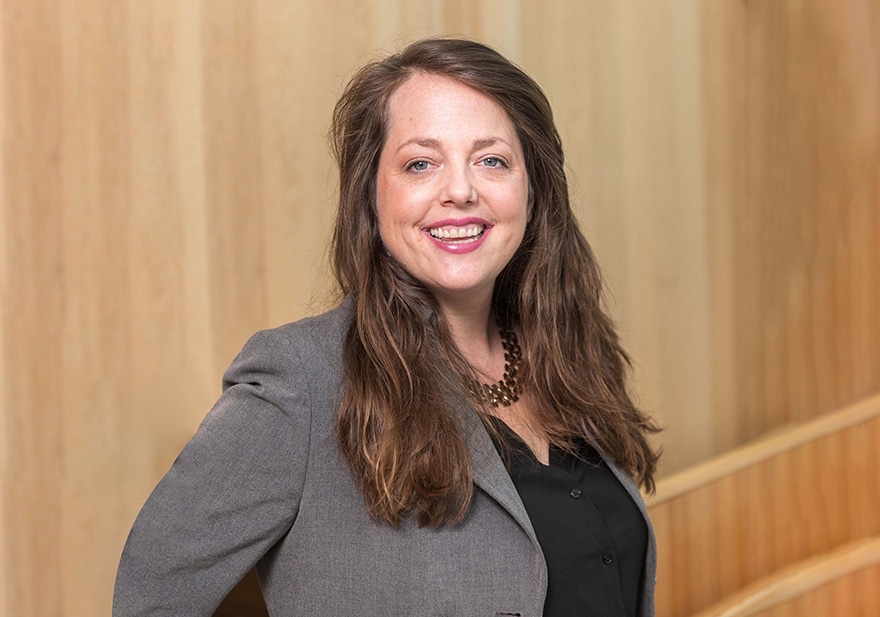 Sweeney says the best way to engage alumni is to start when they’re still students. So, she’s made the alumni center a hub on the Vancouver campus where students can access information and resources, work as alumni ambassadors at the Welcome Centre Desk, or simply meet with friends for a cup of coffee.

Now that the alumni center has been open for several years, Sweeney is working to make it easier to book, plan and execute events, whether a wedding, corporate retreat or conference.

“The alumni center is a place for our alumni to come home to,” she says. “It also supports the connection students have to campus, which will stay strong after they graduate.”

From vision to reality

When Sweeney started working at UBC in 2012, she was the manager for Cecil Green Park House, a historic venue for events on campus.

After refining the rental process for the mansion, which is used primarily for weddings and commercial film shoots, she was tapped to help with planning for the Robert H. Lee Alumni Centre in 2014. Sweeney informally oversaw internal design plans before being asked to apply for a role managing the new center and the Cecil Green Park House. 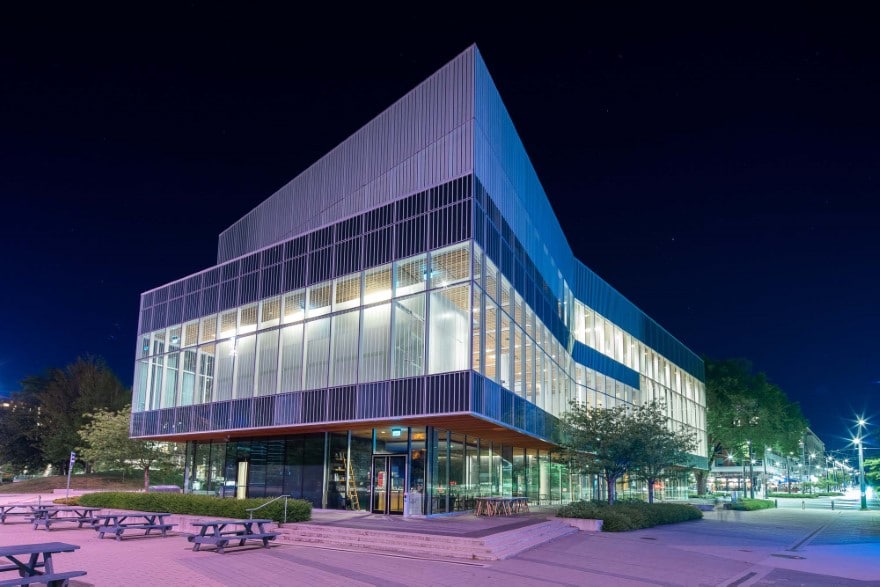 In overseeing internal design, she worked with a committee to choose furnishings and determine “the look and feel” of the center, she says. She also worked on an operations team, where she set the center’s hours, chose a booking system, found vendors and identified ways to bring in revenue. When she was officially hired as operations manager of both facilities, she opened the new alumni center with only one assistant while continuing her full responsibilities at Cecil Green. She then built the alumni center’s team.

With the Cecil Green Park House being so popular for weddings, Sweeney was tasked with making the alumni center a desirable venue, too.

“UBC always knew it wanted the alumni center to be available for event rentals,” she says. “I was brought in to turn that vision into a reality.”

Throughout her career, Sweeney says she’s sold thousands of weddings and other events, such as parties and conferences. She doesn’t plan the events, but instead manages logistics, such as pricing, staffing and marketing.

Since its opening, the Robert H. Lee Alumni Centre has been named a best wedding venue in British Columbia twice by BC Professional Wedding Awards. Sweeney has also kept up with events at Cecil Green Park House, which is completely booked for 2022 with 110 weddings planned between May and November.

She brought together the staff at each building to create one unified alumni facilities team, which she says has streamlined operations. It allows staff to work between the two buildings and share resources, including a new booking system that launched in December alongside a new website.

According to Sweeney, the previous system didn’t have the upgrades she was looking for, such as online booking and payments. The new website has integrated availability calendars and booking forms, as well as a planning guide for clients. 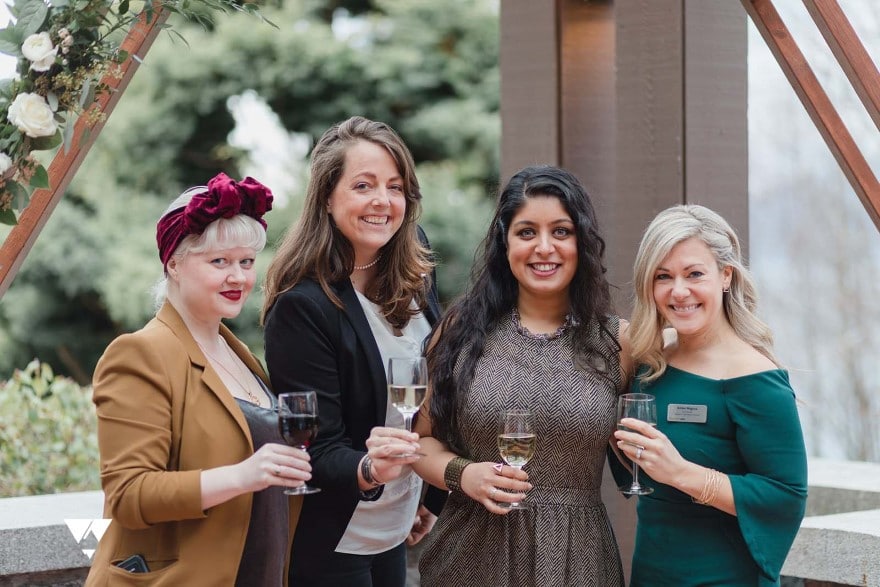 In addition to being modernized and easier to use for customers, the customized booking system is more efficient internally. It allows Sweeney and her department to coordinate staffing, cleaning schedules and deliveries. Also, it’s tied into the department’s customer relationship management tool, which will improve data management and have a better reporting structure.

Sweeney hopes the tool will get more use as people start booking conferences and events again following a halt because of the COVID-19 pandemic. The goal, she says, is for the Robert H. Lee Alumni Centre to be cost neutral by 2023, with event bookings covering all operating costs.

“We’ve been managing hybrid-style events and working towards getting people back in person,” Sweeney says. “We’re staying compliant and safe while always trying to think ahead.”

The business of celebration

After graduating from UBC, Sweeney started her career as an event coordinator and then event supervisor for the Distillery Historic District in Toronto. The district, which was restored in 2003 to be an arts and culture destination, is comprised of shops, restaurants, theaters, galleries and more.

From there, she worked in the theater industry, including as an event services coordinator at the EPCOR Centre for the Performing Arts (now known as Arts Commons) in Calgary. Although she liked the work, she decided to move back to Vancouver and take the next step in career. She wanted to do venue management, preferably for a municipality, when the opening at UBC came about. 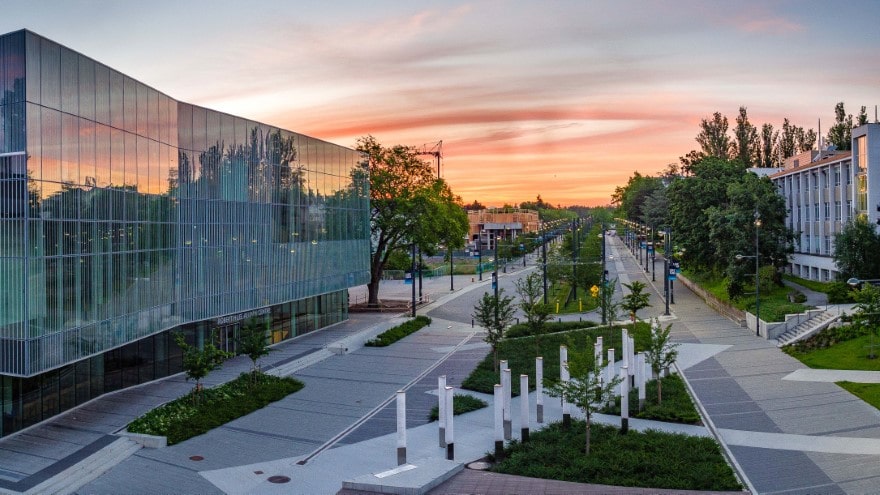 “UBC is so huge it’s like its own city, so it checked that box for me,” Sweeney says.

While it could be strange working on the campus where she was once a student, she says the experiences are so different they’re hard to compare. She says the work environment is supportive and provides opportunities for growth, as evidenced by the promotions she’s received. In 2019, she was given her current title of associate director.

“Working in venue management is logistically complicated, so every day requires solving a new puzzle,” Sweeney says. “I’m in the business of celebration, so it’s a weird job, but it’s never boring.” 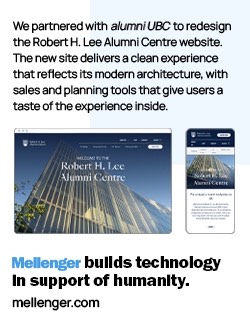