Building on the foundation of respect

There are certain mistakes Neal Hammerschlag will never make again, like wearing pressed khakis and a button-down shirt to a housing construction worksite years ago.

It was his first day on the job as a new superintendent, a major step transitioning from a career in law. He got his share of ribbing from his new team, but as Hammerschlag says, he’s got pretty broad shoulders.

Now the director of construction at Scully Company in Jenkintown, Pennsylvania, he’s poised to bring its Mays Landing project in South Jersey’s Pinelands to the finish line—that is, if COVID-19 doesn’t impact labor, materials, utility work installation, township inspections and just about every other facet of development. Everything else is ready to go.

“We’ll have 25 units delivered by the end of March, barring any stoppages, and we have more than half of those units pre-leased,” Hammerschlag says of the development that will include 220 new units, supplementing the existing 416.

Founded in 1947, Scully Company’s core growth model is repositioning existing multifamily properties. Its goal is to lease units in competitive housing markets, and manage them better than its competitors.

Hammerschlag walked into the Mays Landing project in 2017, with the property acquired years before he arrived.

The existing community included those 416 developed units, as well as two additional parcels of land that remained undeveloped. Despite the completion of some design work early on for the undeveloped sites between 2004 and 2007, plans were put on hold for economic reasons in 2007-2008.

“The general state of the economy just didn’t warrant the decision to lean into this one at that time,” Hammerschlag says.

Picking up the thread of the project in late 2017, Scully’s team of design professionals reinvigorated the plan, included updated architectural and civil plans, and obtained the all-important Pinelands Development Credits to address stormwater drainage in that protected area. Approvals were granted in late 2018, and by New Year’s Day 2019, Scully and its general contractor, Caritas Construction, were moving dirt.

While the cost of the project remains undisclosed, Hammerschlag says a major expense for Scully was site work on the 23-acre parcel in the heart of Atlantic County, New Jersey.

The buildings constructed within Mays Landing involved 35 two-story, garden-style structures from the ground up, each with direct access to the outdoors.

“This job required a substantially larger proportion of site work than is typical of this type of project,” Hammerschlag says.

Amenities include a dog wash station, tennis courts, a swimming pool, and valet-style trash pickup. Come fall, Scully will knock down the existing clubhouse and rebuild an updated facility intended to serve 636 units.

“The setting offers a quiet landscape in an area that’s really seen a lot of growth,” Hammerschlag says, noting the location’s not far from significant healthcare operations, casinos, restaurants and retail, bars, and nearby Stockton College.

“Initially we were concerned that our footprint might be too large in this area, but now we see what’s developing and we feel as though we are well-positioned,” Hammerschlag says. “It’s exciting to have new product in an area that hasn’t seen much in that way, and to see how everything’s transformed from pine trees and scrub brush to a tranquil living environment. We are all very excited.”

Among other things, it’s that feeling of transformation as well as the development of a tangible product that drew Hammerschlag to real estate.

After he earning his law degree from Rutgers Camden in 2007, Hammerschlag worked as an associate at Lavin, O’Neil, Ricci, Cedrone & DiSipio (now operating under a different name) for about a year handling various commercial transactions, including M&A agreements, bank loans and real estate matters. Around this time, he met a gentleman in childbirth class, also a reformed attorney, now a vice president of operations for a regional home builder. He ultimately accepted a role at Orleans Homebuilders in 2008.

“I certainly brought my law skills to the table, which proved to be useful in a variety of ways. It’s a modality of thought that gets beaten into you,” Hammerschlag says. “I found that my legal training provided me with the ability to understand various job and job-site related issues and digest them in an atypical manner, even though I didn’t any formal construction training.”

Upon leaving Orleans after just over three years, he took another project management position at PMC Property Group in 2011. Promoted to vice president in 2013, he stayed in that position for a year before joining Scully.

“I got a feet-to-the-fire education from multiple talented people on several different fronts, including an understanding of the nature of buildings — building everything from historical rehabs, overbuilds, amenity rejuvenation and ground-up experience in how to deal with the trades,” he says.

“Everyone brings a unique skillset to the work,” Hammerschlag says. “What was most impactful for me was having the humility to recognize what I didn’t know,  and to maintain a sense of openness and respect so I could learn what I needed.”

Also, he says, “Every day is different, and every job has its idiosyncrasies and nuances that keep it interesting. I enjoy mixing it up with everyone—from different owners, clients and design professionals to contractors and laborers.”

While he didn’t grow up in construction circles and was keenly aware he didn’t know everything, he says being a good judge of character has served him well. By respecting his coworkers—regardless of their positions—he has relied on certain trusted individuals to learn and make good decisions.

“I continually nurture my working relationships,” he says. “I keep the tool-wielding folks in the forefront of my mind at all times, and never lose sight of the fact those individuals are breaking their backs to execute our plans.” 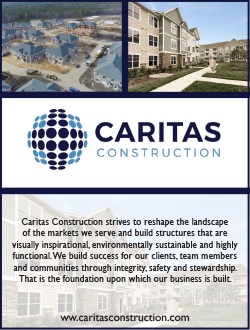