A project 13 years in the making, the National Museum of African American History and Culture (NMAAHC) was established by an act of Congress in 2003 to celebrate African American history while recognizing the unique hardships and cultural contributions that encompass the African American experience.

Scheduled to open in late September 2016 the NMAAHC is a Smithsonian Institution museum and occupies the last available plot of land on Washington, D.C.’s National Mall between the National Museum of American History and the Washington Monument. In addition to acting as a museum, the NMAAHC will also serve as a venue for ceremonies, performances, exhibits and public gatherings of all kinds.

The museum was designed as a collaboration among four architectural firms: The Freelon Group, Adjaye Associates, Davis Brody Bond, and SmithGroupJJR. The team, known as Freelon Adjaye Bond/SmithGroup, was selected over five other finalists to construct a 350,000-square-foot museum on the 5-acre site that had to meet LEED Gold standards. D.C. design review standards, and strict federal security standards. 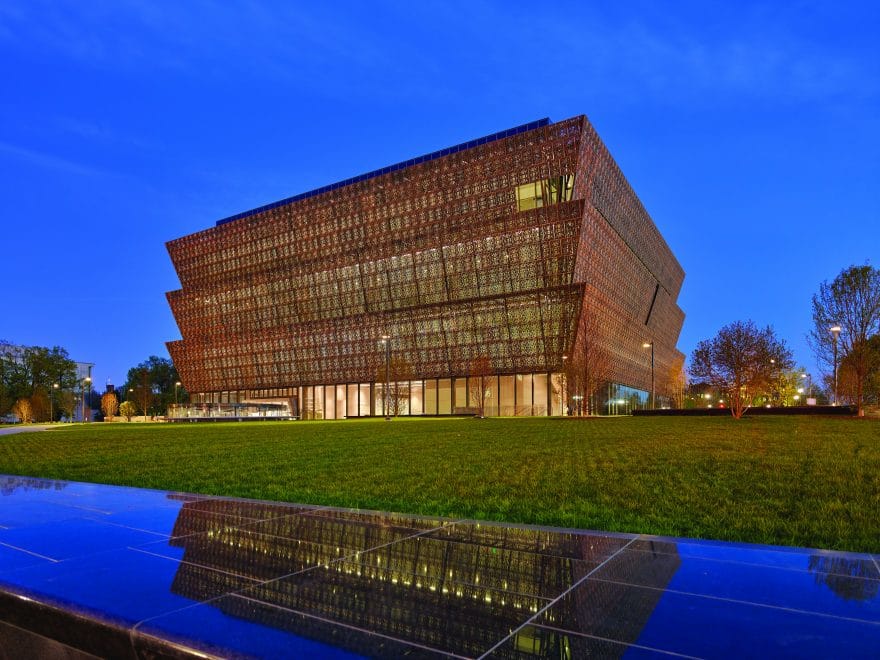 The team’s design won out in part due to David Adjaye’s unique approach to the building’s shape, which senior project manager Zena Howard describes as a crown or corona. The three-tiered shape was inspired by a traditional wooden column called the Yoruban Caryatid, a design made famous by Nigerian artist Olowe of Ise. “It just wonderfully fits in with its neighbors in terms of scale and proportion,” says Howard, a principal at Perkins+Will, which acquired the Freelon Group in 2014.

The newest addition to a historic neighborhood

While a location on the National Mall places the NMAAHC within walking distance of some of the nation’s most famous monuments, museums and galleries, the site presented a significant challenge for the design and construction team.

As part of the mandatory environmental impact process, the design team consulted with myriad stakeholders throughout the process, including the Commission of Fine Arts, National Parks Service and United States Secret Service. It is at this point that the designers had to make a vital decision regarding the building’s exterior.

“That site is seen as a hinge point between the formal National Mall and the more informal Washington Monument Grounds, so the question was should it relate more to the formality of the mall or the bucolic landscape of the grounds,” says Howard.

The decision was made to reflect the landscape of the Washington Monument grounds, which led the design team to revisit its approach and reduce the building’s overall prominence. “That’s when it went from being 20 feet below grade to nearly 70 feet below grade,” says Howard.

The lower prominence also allowed the NMAAHC to better complement surrounding buildings along the historic National mall. “We knew we had to be very respectful and pay homage to this place, which is one of our national treasures, so we looked at alignment with other buildings on the Mall and ensured that the footprint is in-scale, appropriate and not upstaging the Natural History Museum or Federal Triangle buildings,” says Howard.

With nearly 60 percent of the building’s interior space located underground, the team had to deal with a number of construction challenges related to the site’s shallow water table.

“Most of the buildings in the Triangle or Mall are limestone or marble, so while materially the building is very different and a more modern expression with aluminum panels finished in bronze coating, it’s still very respectful of its neighbors,” she says. This respectful approach is particularly evident in the angle of the building tiers, which is designed to mirror the angle of the capstone on the nearby Washington Monument.

With nearly 60 percent of the building’s interior space located underground, the team had to deal with a number of construction challenges related to the site’s shallow water table.

“None of us were aware of the extent of challenges with water we would actually encounter. It was basically like building a big bath tub because you go down a few feet and hit the water table,” says Howard. The team had to continuously monitor water levels at adjacent sites throughout the construction process to ensure that the water displaced from the NMAAHC site didn’t compromise neighboring buildings.

The museum’s interior is composed of five large gallery spaces containing some 40,000 artifacts and is home to several large exhibits that had to be lifted into the building during the construction phase. These include a guard tower from the infamous Angola prison in Louisiana, Chuck Berry’s Cadillac, an airplane used by the Tuskegee Airmen and a full-size railcar from the segregation era.

“It was actually lifted up and set in the building with two large cranes working in tandem and the building construction continued around it,” Howard says. “Now that all these significant, large artifacts are installed, the focus is on smaller exhibits displayed in case work. It’s exciting to see this various content come together because that’s the goal: to tell the story.”

The museum experience starts on the building’s lowest level with a history gallery that covers the period from the transatlantic slave period to the Civil Rights movement of the late 60s. On the museum’s upper levels, community and culture dominate the exhibit space.

While it’s difficult to pick a favorite from among the 40,000-plus artifacts, Howard says Harriet Tubman’s hymnal holds a special significance for her personally. “It’s not one of the larger, more dominant artifacts like the Cadillac or railroad car, but it is that very personal artifact that resonates with me,” she says.

The NMAAHC represents the first new building in the Smithsonian portfolio that is expected to achieve LEED Gold certification. This level of certification is not only outside of the norm for the Smithsonian, but also a significant challenge given its use as a public museum.

“Museums are one of the building types that often lag behind in seeking official certification,” she says. “As designers we strive for the highest performance standards possible within the project constraints.   However, seeking certain levels of certification can be more difficult because museums operate around the clock with very strict temperature and humidity requirements.”

By honoring both the culture and lives of African-Americans and paying homage to the historic significance of its location on the National Mall, The National Museum of African-American History and Culture designed by Freelon Adjaye Bond/Smith Group is poised to become the new must-see museum in Washington, D.C.