Patience isn’t a virtue to Mike Emerson. At least not while carrying out his duties as executive director of facilities management at Elmhurst University, a private liberal arts school in suburban Chicago and affiliate of the United Church of Christ. 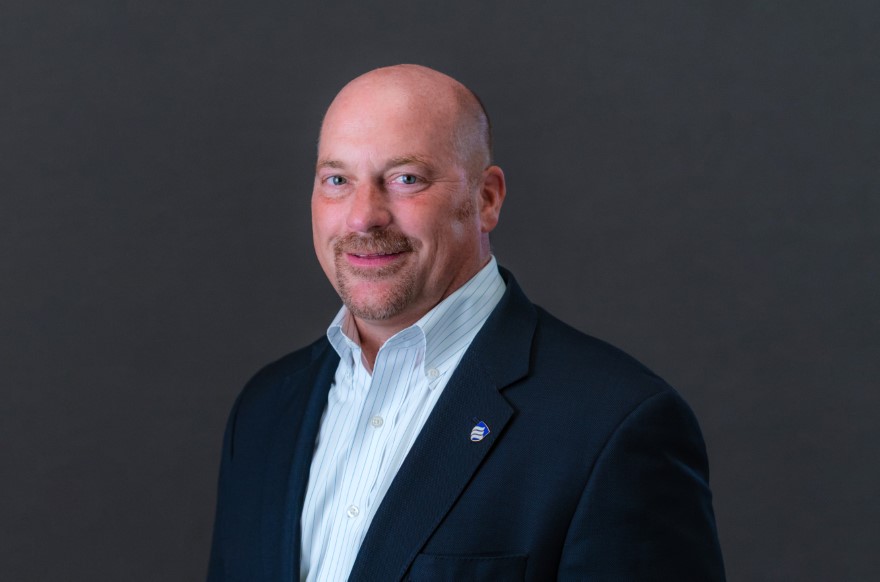 “We only have our students for four years,” the otherwise congenial Emerson emphasizes during a Blueprint interview in December. “In that short time, we need to provide the best spaces and facilities for them to grow.”

That time has seemed even more pressing since last March, with a pandemic disrupting Elmhurst University and just about every other institution of higher learning. But Emerson seized upon last spring’s pivot to remote learning as an opportunity to update and upgrade campus facilities for what’s been as normal a current academic year as circumstances would allow. 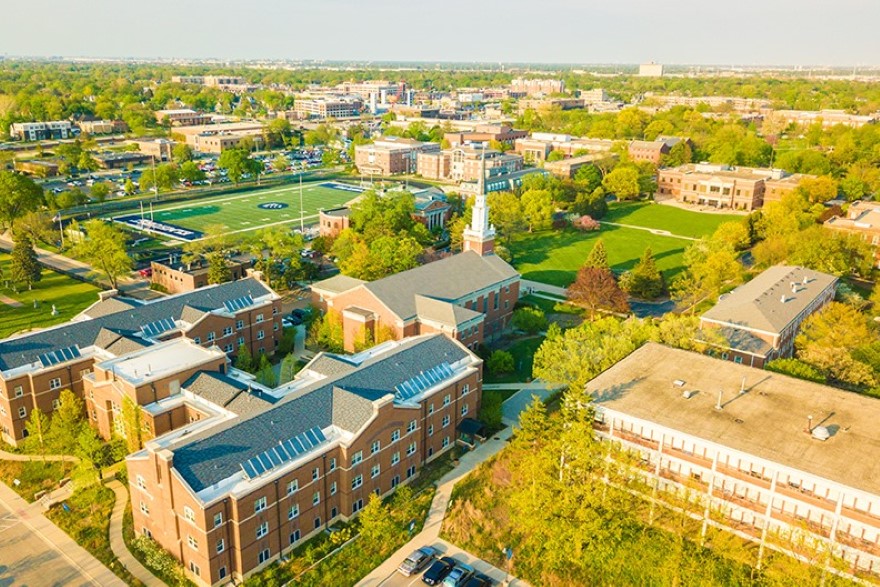 A hybrid teaching model was used for the 2020 fall term, including the in-person classes and student-faculty interaction that Elmhurst deems so valuable. It’s taken much work behind the scenes to put everything in place, he notes, the process having commenced when the campus vacated in March.

That gave Emerson and his team a jump on summer projects. With carpenters, painters, electricians, plumbers and MEP mechanics among the 50 full-timers under his wing, he says, “it was an opportunity to bring this team forward, out of their comfort zones, and let them shine.” All while saving the university money through the use of in-house labor.

And they did shine, Emerson explaining how his crew reconstructed and consolidated the mailroom and print center almost entirely on their own and installed an auto-locker system to deliver packages with zero touch. More recently, with outside help, they finished transforming a 21,000-square-foot gym into a multiuse sports complex. University President Dr. Troy VanAken directed the formation of a COVID-19 task force, on which Emerson sat, to develop and recommend protocols for campus operations amid a pandemic.

“We went into every classroom, redesigned floor plans and changed seating arrangements,” he says. “Where we couldn’t move seats, we used ropes to cordon them off.” 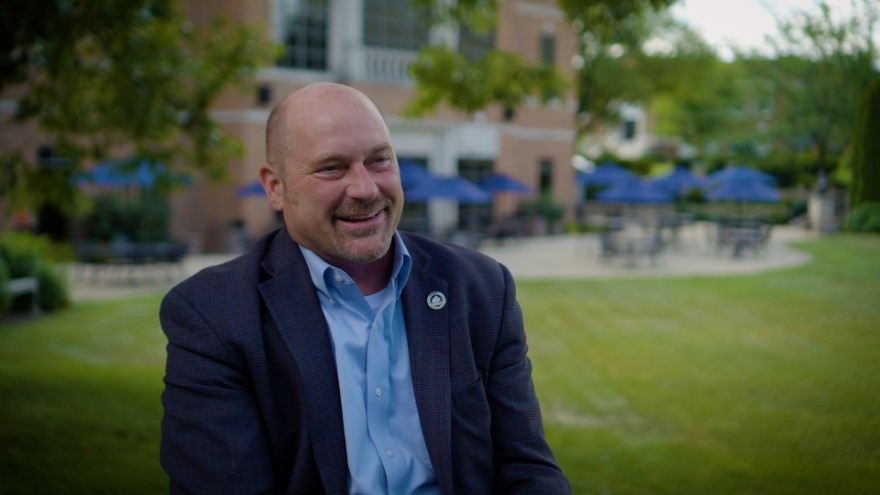 These devices, called NovaRovers, resemble a pushcart and disperse an EPA-registered antimicrobial spray that essentially eliminates human error by covering a 12-foot radius. Though low in toxicity, the disinfectant can break down microbes for several weeks or more, making it just the solution to keep all surfaces as virus-free as possible.

“It’s just perfect for our dorms,” Emerson says. “We wanted to be prepared if an entire hallway of students came down with the virus at one time. We could sanitize 700 square feet in eight seconds.”

Then there are the less high-tech means to reduce the odds of an outbreak, including several thousand square feet of plexiglass shielding and a lot of signage. The university has tripled the number of hand sanitizer stations on campus and introduced an abundance of masks, plastic gloves, sprays and paper towels throughout every building. 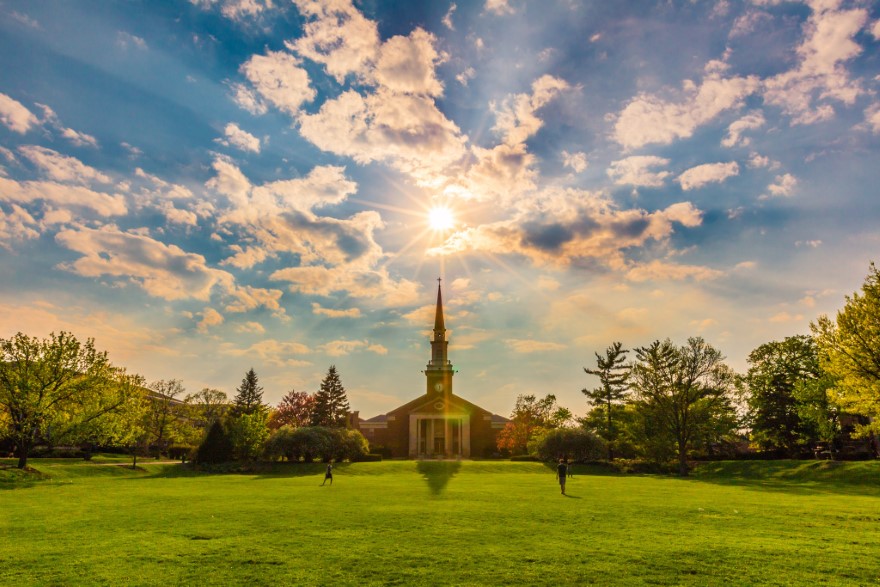 As Emerson explains, Elmhurst University has also benefited from the insightful and innovative support that Trane Technologies has provided over the years. Trane equipment and systems heat, cool and control almost the entirety of the campus and its team brings cutting-edge technology coupled with visionary expertise to every effort it undertakes on campus. Early on in the COVID-19 crisis, it was Trane that recommended the installation of Merv-13 filters in all primary air handling units.

“All these things communicate to our faculty and students just how important their health and safety is to the university,” Emerson says. “The fall semester has gone much better than we could have anticipated. We have very good leadership at the top, and we (facilities team) have taken our assignments very seriously.”

And a campus setting seems just where Emerson should be as a direct descendant of a man who did much to further the intellect of 19th-century America through insightful essays and lectures. Yes, indeed, Mike Emerson can trace his lineage to Ralph Waldo Emerson, who even established a school in Massachusetts. 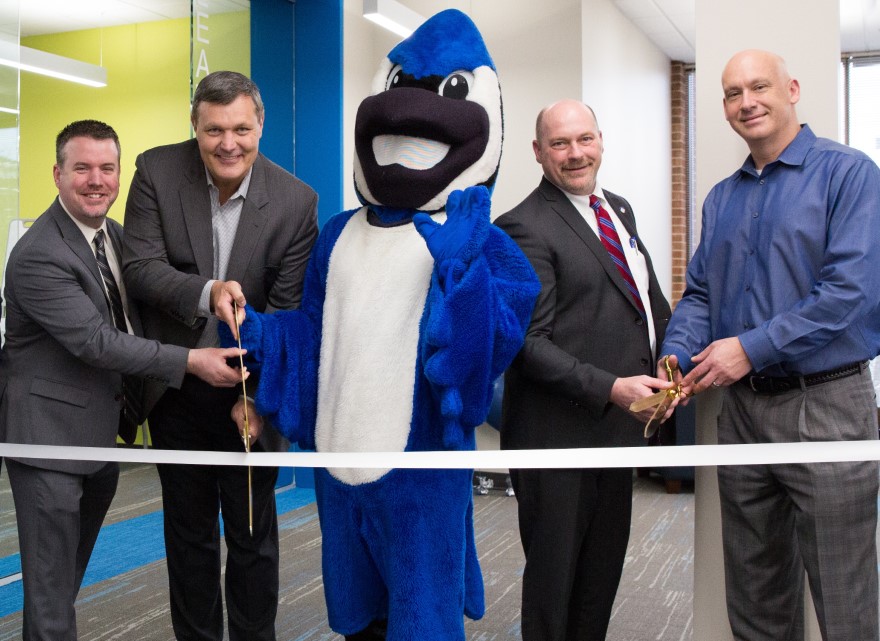 Mike Emerson’s journey back to campus was somewhat circuitous, the 1988 Purdue University architectural grad with two master’s degrees from the University of Illinois at Urbana-Champaign having cut his teeth with Benjamin Thompson and Associates in Ralph Waldo Emerson’s old stomping grounds of Cambridge, Massachusetts.

Next, he was an associate with Aspinwall/BCP Hong Kong, plying his skills in the Asia-Pacific region from 1990 to 1992. Back stateside, he served a couple of years as director of design services at the nonprofit historic preservation organization Indiana Landmarks Foundation, and then spent a 19-year stretch as senior vice president at VOA Associates Inc.

Finally, in 2013 he got to apply his architectural know-how as an administrator, when he became an associate vice chancellor at City Colleges of Chicago. Five years later he’d move to Elmhurst University, which Emerson perceives—in the best way—as something of an island.

Situated in Elmhurst, Illinois, the university is far enough from, yet close enough to, Chicago proper. Even the Chicago Bulls legend Michael Jordan found relative peace and privacy on campus while running his basketball camp for several years at Elmhurst. An apartment-style room in one of the older residence halls where Jordan preferred to reside while on campus, is currently being used to quarantine those exposed to COVID-19. 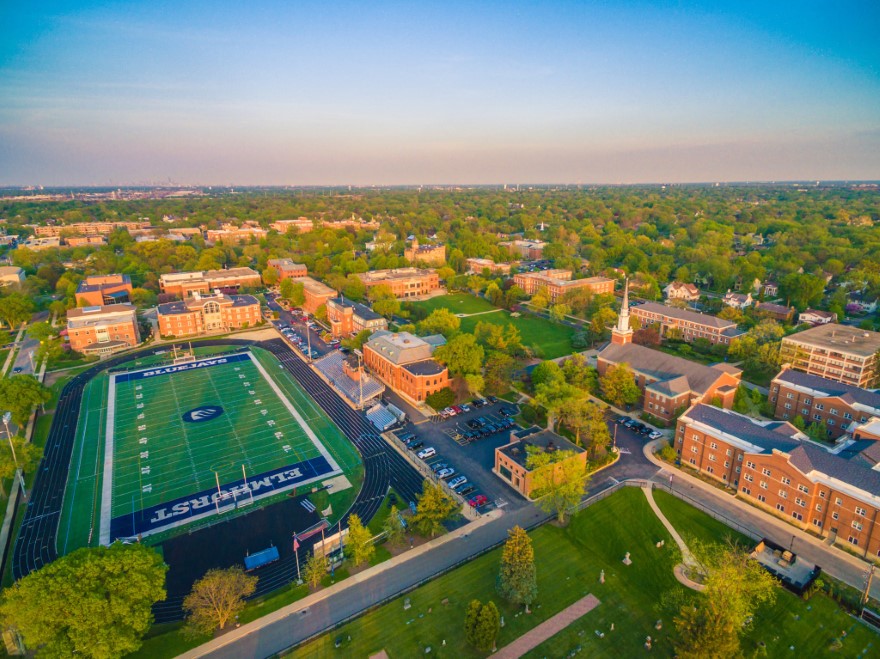 “We’ve had some staffers and students test positive, but campus safety has done a remarkable job of contact tracing, isolating and containing the spread,” Emerson says. “Mr. Jordan just loved Elmhurst. Here he could walk down the street and not be disturbed.”

He also finds the general area an agreeable place to live with his wife, two sons and two daughters. Among other attributes, it’s not far from Lake Michigan, where he enjoys boating. There wasn’t much time for that last summer, but he’s hoping for some R&R come June.

One thing’s for certain, he won’t let any projects be unduly delayed. Whatever needs to be done by the time school lets out, likely will.

“My biggest fault might be what’s also best about me,” Emerson says with a good-natured laugh. “I’m a very impatient man, but in my line of work, patience can be one’s undoing.” 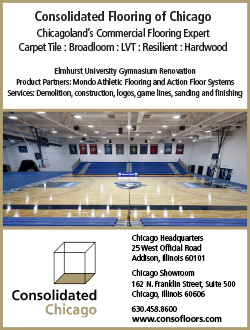 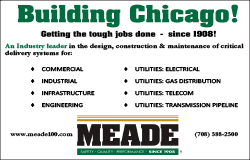 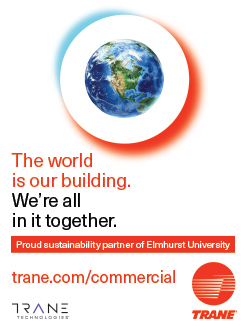