A mixed-use design for the 21st century

When it comes to urban development, “mixed-use” is a term that gets volleyed around quite a bit these days.

As cities and towns grapple with their (in some cases limited) existing space and simultaneously strive to make themselves desirable, the concept of melding residential, commercial, cultural and industrial uses into one harmonious package seems to be ever more appealing.

The town of Wakefield, Massachusetts, for its part, is actively putting the idea into practice.

Working closely with Woburn, Massachusetts-based Maggiore Companies, the north-of-Boston suburb will soon unveil a brand new fixture: The Residences and Shops at Wakefield Station, a development in the downtown area that will combine residences, retail space, restaurants and common open areas.

“We’re trying to create a vibrant, transit-oriented community in this district,” says Matthew Maggiore, president and senior construction manager of the family-owned The Maggiore Companies. “It’s truly a unique project.”

Working with Harrison Mulhern Architects of Winchester, Massachusetts, Maggiore broke ground on the roughly $30 million project in September 2016, and expects it to be completed by January 2018.

Located at 175 North Ave., just a block from the Massachusetts Bay Transportation Authority’s Wakefield commuter rail station—thus the origination of its name—the five-story development will include 60 condominiums, 8,000 square feet of ground-level retail space, and a 56-space indoor heated parking garage.

Of the living spaces, eight have been designated affordable, and were acquired through a lottery by the Massachusetts Department of Housing and Community Development, with preference given to Wakefield residents, Maggiore says. That lottery is now complete, with all of the units slated to be occupied by January. Meanwhile, the other 52 units—nine of which are penthouses with roof decks—are under contract, he says.

Buyers have their choice of color tones—warm or cool—and will benefit from amenities such as high-efficiency HVAC, Bosch appliances, LED lighting, Wi-Fi burglar alarms and thermostats, a door-call security system, and numerous other high-end finishes that give the development a “boutique” feel. There will also be a common courtyard area with a green roof, fire pit, gas grills and gardening space.

“These are finishes that you would see in luxury condominiums in Boston,” Maggiore says. “We’re confident that people will be impressed.”

The building, which is a constructed of steel, concrete and wood is “extremely energy efficient and eye catching, combining brick, horizontal siding and aluminum composite panel exterior facades.”

One of the hallmarks of the property is its walkability: It is close to the town’s rail station, downtown area, local golf courses and Lake Quannapowitt, a popular recreation spot. And Wakefield itself is centrally-located at the intersection of two major highways, I-95/128 and I-93.

Meanwhile, the ground-level retail space does not want for attention; so far a personal training facility is slated to set up shop, Maggiore says, and local restaurants and coffeehouses have also come knocking.

Overall, Maggiore says that the development will only augment the town’s already rich resources. “Wakefield is a strong, North Shore Boston suburban community,” he says.

A blueprint for the future

Once completed, the goal is that The Residences and Shops at Wakefield Station will set the standard for future developments in the town of roughly 25,000 just 10 miles outside of Boston. Wakefield has sought such a mixed-use project, amending its zoning laws in recent years to allow greater density of multifamily dwelling units within close proximity to a railway station.

In its economic development master plan, the town notes that the location at North Avenue is an “important crossroads,” and “provides an excellent location for transit-oriented development.”

“Its proximity to transportation, retail, services and Wakefield’s recreational and civic center, makes it ideal for a relatively dense mix of residential and commercial construction,” he continues.

When the previous owner put out a call for offers, Maggiore answered, and ultimately won the bid to purchase the property. “We were one of a select group of local developers who had the opportunity to submit an offer,” Maggiore says. 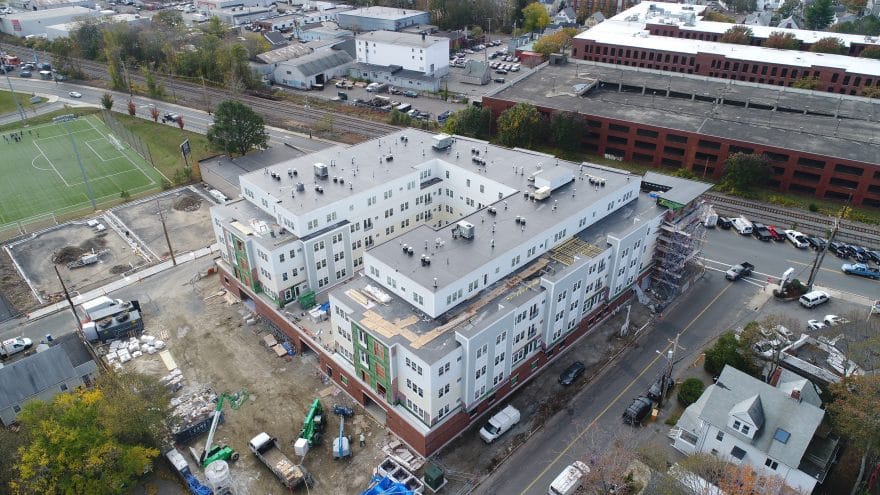 The firm worked closely with Wakefield officials and residents throughout the design process, presenting at approximately eight zoning meetings and working diligently to create just the look and feel that the town was seeking.

Maggiore describes it as an amenable, collaborative project. “There is a great group of folks there,” he says. “Everybody in town was very helpful. All town departments have been very supportive.”

The challenges along the way were minimal—the one halting force was Mother Nature. “We had to push through a harsh winter (in 2016) and a very wet spring (in 2017),” Maggiore says, “which set us back a bit.”

But all told, “it was a great opportunity to work in Wakefield,” he adds. “Everything has been extremely well-received. The town is very much in favor of this project.”

But not only was it a new frontier for the town—Wakefield Station is one of the larger residential projects The Maggiore Companies has worked on over the past decade.

As he grew the business, it went from being a one-man construction shop to a construction management and property development services company—and one of the premier flex industrial real estate development firms in the Bay State. 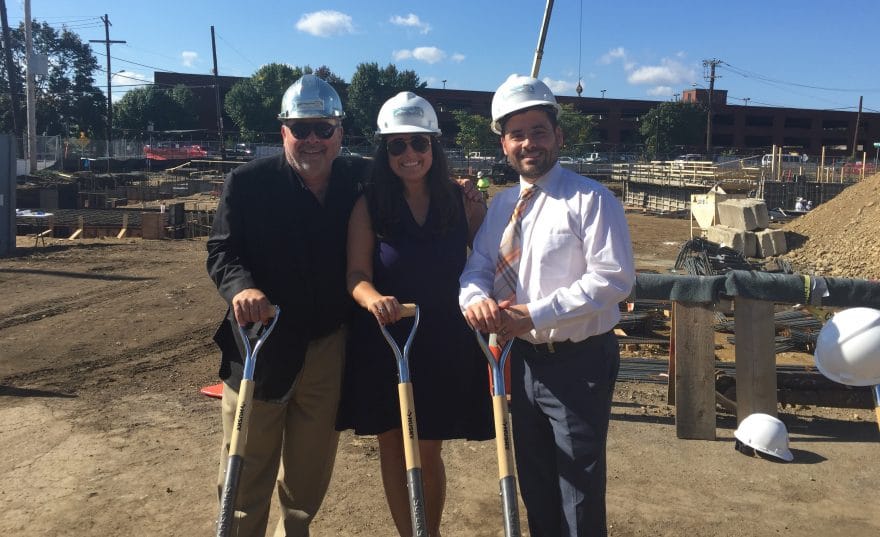 In addition to Wakefield Station, the company is constructing a 153,000- square-foot Toyota automobile dealership in Woburn, MA and a 29 unit condominium development in Davis Square, Somerville.

Maggiore recently completed a 43,700-square-foot natatorium and gymnasium at the James L. McKeown Boys and Girls Club, also in Woburn, as well as a 34,000-square-foot Infiniti automobile dealership in Nashua, New Hampshire.

Matt Maggiore has been involved with the company since his adolescence, starting out as a laborer and office assistant.

“It was the excitement at that age of getting to go out on construction sites, being around big trucks, heavy equipment,” he says. Overall of the design-build industry, he adds, “I think you just kind of have it in your blood.”

He joined the company full-time in 2001, after graduating from Skidmore College with a Bachelor of Science in Business Management, and has done his best to be hands-on. Which has been the case with Wakefield Station.

“It was our project, from the concept in our heads to completion,” he says. “We had our design-build hats on—we were very heavily involved in the design, layout and the amenities that came with it. It is a project that we will be proud to have our name associated with for years to come.” 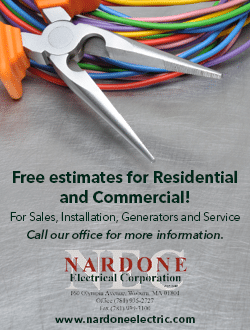 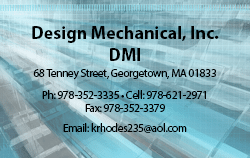 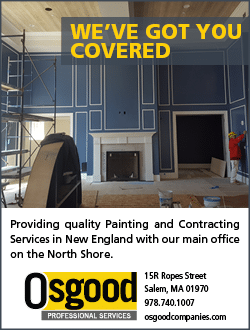 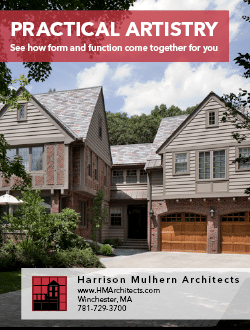 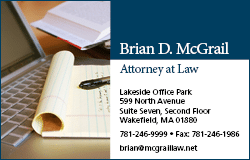 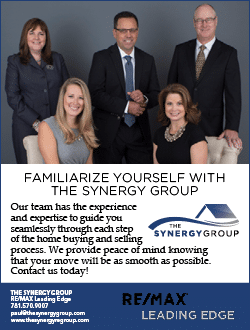 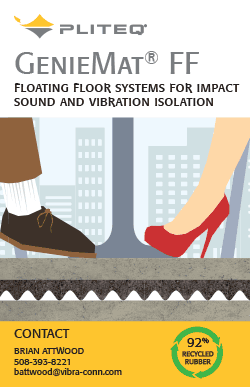