Putting up a façade

It was definitely not a case of “one if by land, two if by sea.” Instead, when it came time to deliver and install the 32-foot-high glass panels for the new Apple flagship store façade in Chicago, it was bring it by barge up the Chicago River.

The panels were not just dropped off at the shoreline, either. They were lifted from the barge by a crane set on steps leading from Michigan Avenue to the river and set into place below a roof resembling a MacBook. 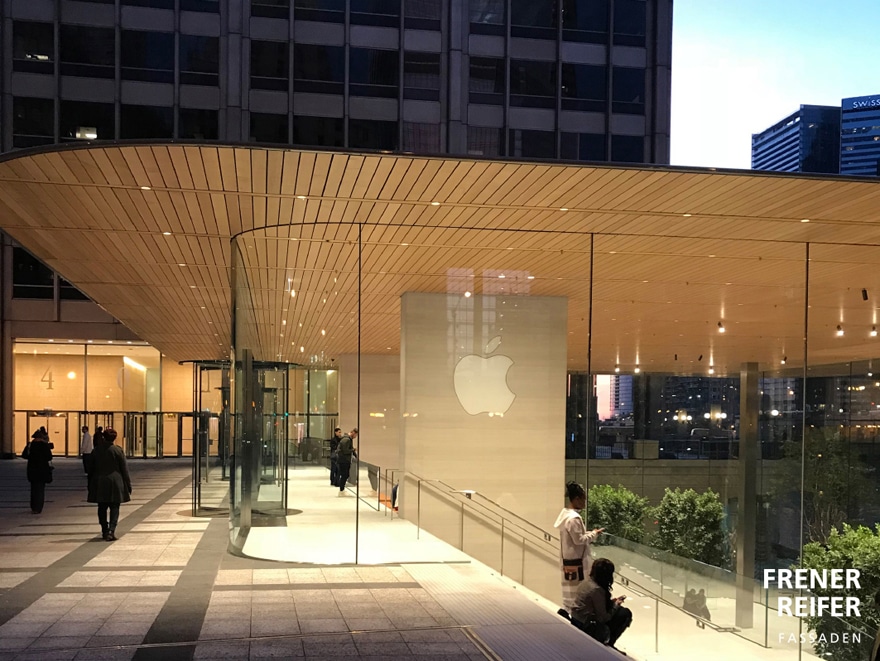 While no everyday job by anyone’s imagination, the Apple store façade computes perfectly with what Frener & Reifer looks to do for its customers all around the world, says Marc Zimmer, the company’s president of U.S. operations.

Apple of their eyes

Installing glass plates from a barge is one way to attract attention, but Frener & Reifer, headquartered in the South Tyrol region of Italy, is not a company that does demure work.

“We don’t really have a product,” Zimmer explains “Our product is the development, management and fabrication of projects; but everything is unique and custom developed.”

Zimmer is in charge of designing and executing projects in the U.S. and Canada, but the 45-year-old company has a global footprint for its highly specialized work. 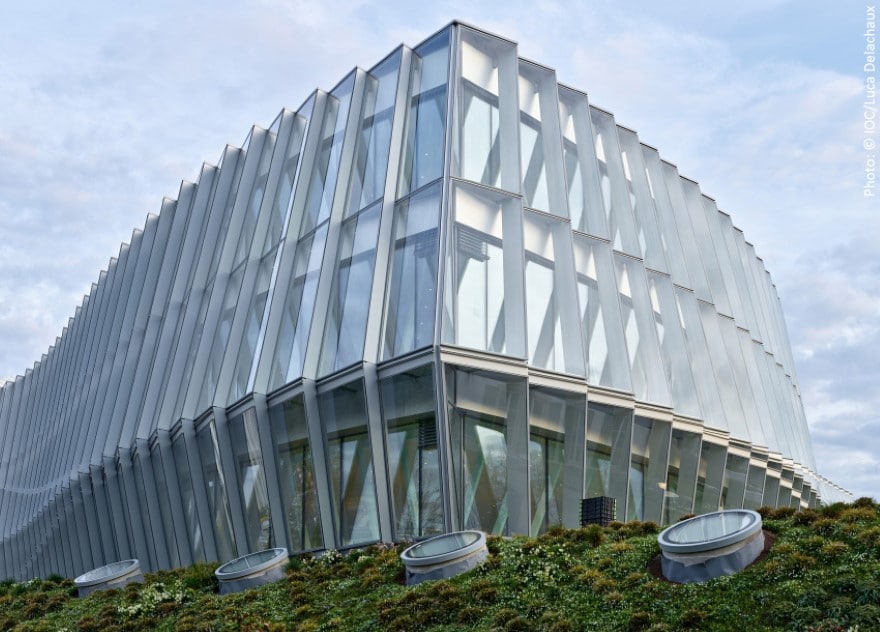 This consists of a lot of work for Apple in the last decade, including the façade for the Steve Jobs Theater at Apple Park in Cupertino, California, as well as company flagship stores across the U.S.

The Steve Jobs Theater, completed around the same time as the store in Chicago, is also similar in its use of 44 clear glass, 22-foot-high exterior panels arranged in a circle 135 feet in diameter.

Frener & Reifer also built and installed the new stainless steel canopy and the entrance façades for the $450 million expansion at New York’s Museum of Modern Art. The project added 40,000 square feet to the museum with a dramatic re-envisioning of its entrance on 53rd Street. The new glass panels fronting the museum invite the public to view the collections inside, and Zimmer says the canopy, suspended from cables, offers a striking touch.

“It is unique because of different wall types in the façade,” he says. “If you look at the entrance, it appears as if it is floating—a 50-ton weight you see as unattached.” 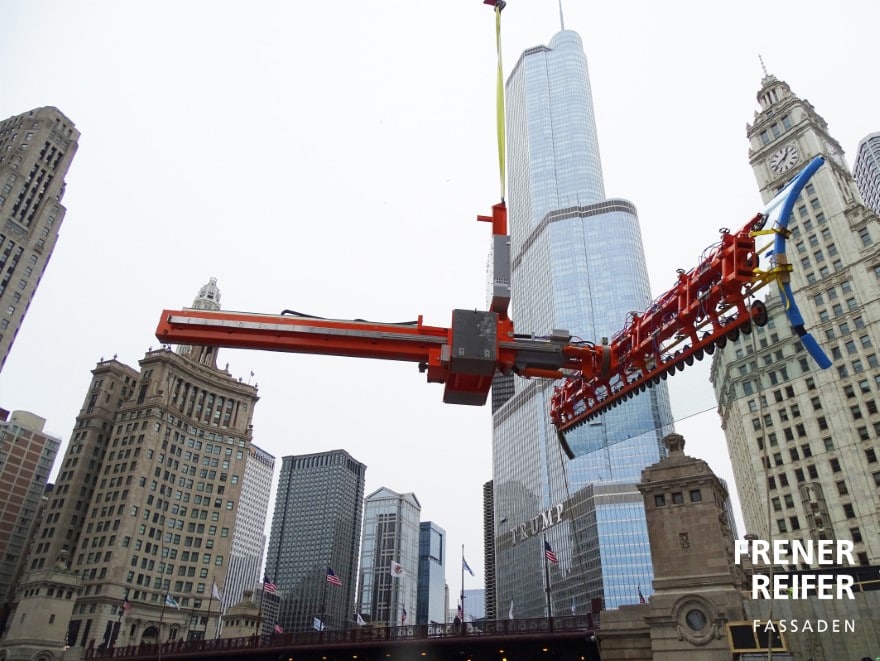 The canopy was delivered in four panels. While some assembly was required, no barge was needed. Instead, Frener & Reifer and the contractors installing the canopy had to work around midtown Manhattan traffic as delivery and installation were completed on weekends during off-peak traffic hours.

Such planning is part and parcel of the job as the company engages in design planning and execution, Zimmer says.

“You can’t look at these elements in a vacuum. You have to realize how much they overlap,” he says.

When it comes to getting projects, Frener & Reifer does not bid directly to a company like Apple, but it does have a network of architects and contractors who rely on them for distinctive and unusual design demands.

“Frener & Reifer provides design, production and installation,” Zimmer says, “So imagine them as circles arranged in a triangle, and each has an overlapping portion.”

Filling those overlapping portions is the value added proposition for Frener & Reifer and the amount of overlapping varies from project to project. 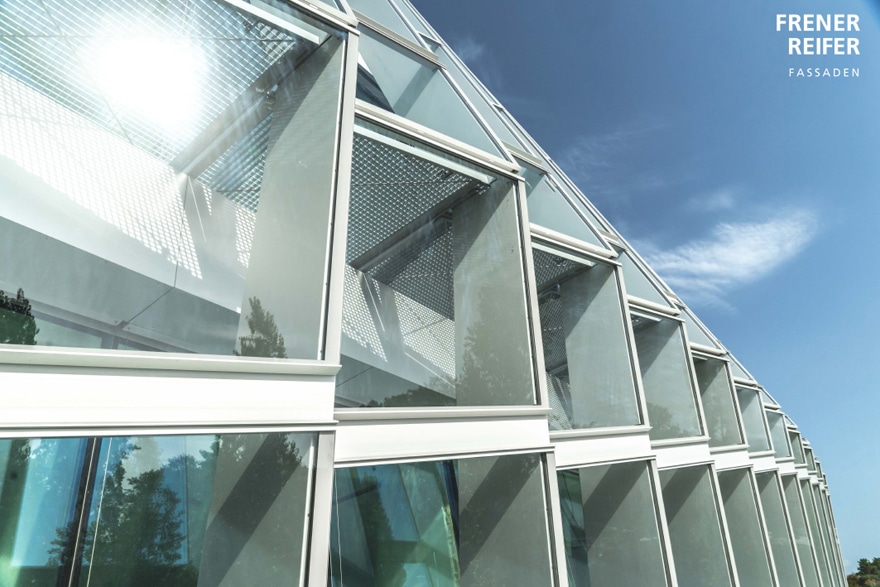 “We work early on with our clients to develop unique solutions and we can give them a certain security that we can develop what is needed,” Zimmer explains. “We already have over 45 years of custom solutions experience in place to manufacture components.”

While Zimmer and his staff may line up work on both coasts and in the Midwest, all of the components are built and tested at the company’s production plant in Italy. The process assures quality control and the best testing methods.

Frener & Reifer’s U.S. operations are small, with Zimmer leading a team of five and splitting his days into four blocks that begin by working with the Italian headquarters to coordinate projects, progressing to working with U.S. clients, and ending with internal and project-related troubleshooting.

A native of Germany, Zimmer holds degrees in engineering and business from German and U.S. schools, including a structural engineering and IT degree from Technische Universitat at Darmstadt, a Masters of Science from the University of Buffalo and an MBA from Babson College.

Zimmer says he came to the U.S. for a job and had not expected to stay for more than a few years. Married, he and his wife enjoy travel and photographing the places they visit, and he also enjoys golf.

By staying in the U.S., Zimmer has built a design and operations career that has culminated in a very specialized segment of the construction industry.

“We combine materials that have not been combined before,” he says. “We are pushing the boundaries in the industry and maybe providing future solutions.” 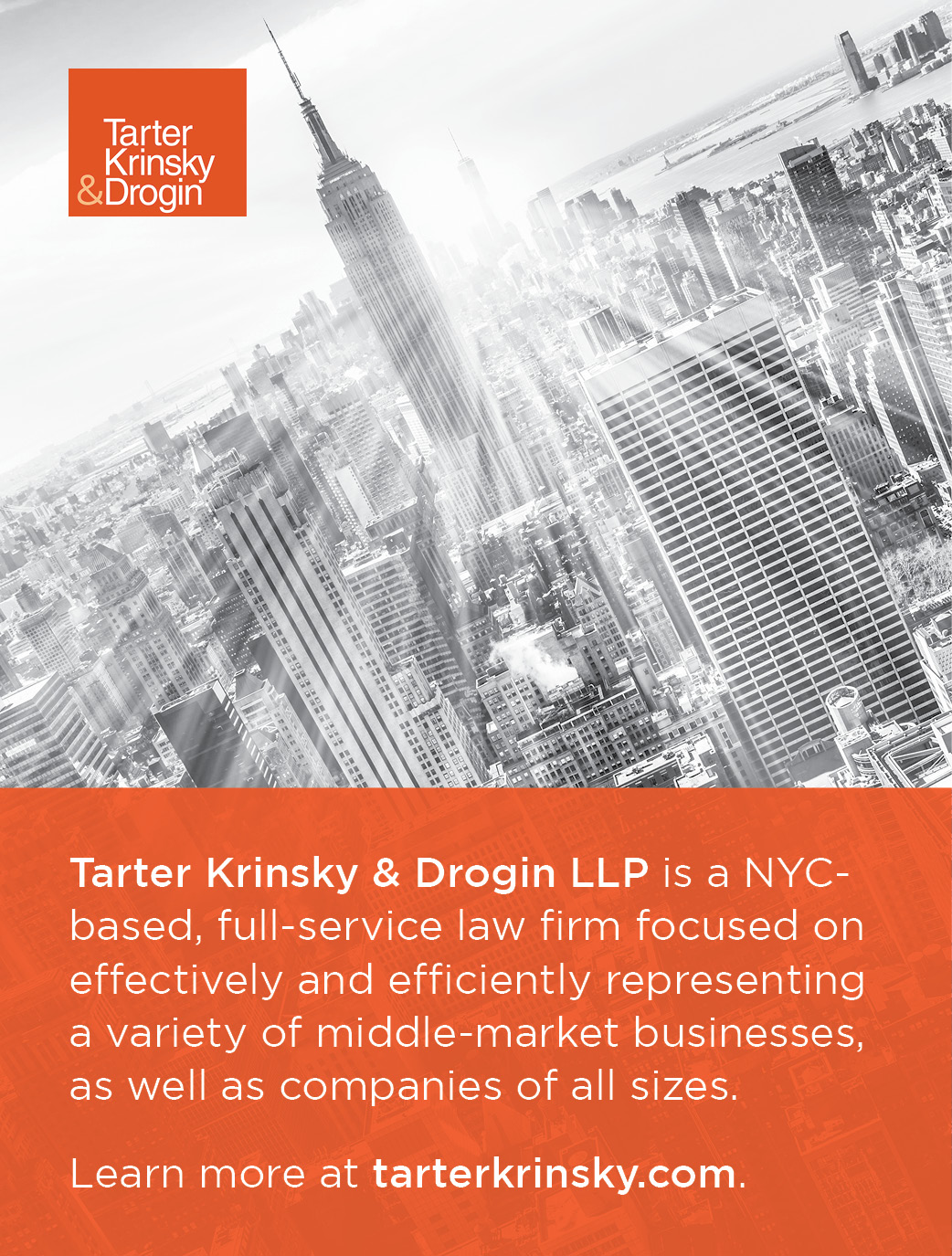