Imagine a future in which solar panels are incorporated into the design of every new building, not just tacked on to roofs or installed as stand-alone arrays. Ten years ago, Scott Franklin dreamed of that future, and through his company, Lumos Solar, he’s bringing the idea to fruition.

And beyond the tangible, Lumos Solar is opening people’s eyes to the endless ways solar power can be incorporated into the built environment, how it can provide not just renewable energy but shade, weatherproofing and aesthetics, too.

“We want people to interact with solar, to have it enhance their lives, not just be something out in a field or desert,” Franklin says.

In his ideal world, solar panels would cover everything from fast food drive-ins to sports stadium entryways and school parking lots, so people would encounter solar on a daily basis and the benefits wouldn’t have to be explained.

From bus stops to bungalows

In the 10 years Lumos Solar has been in business, Franklin estimates it has sold thousands of its solar-mounting products. They appear on university campuses, headquarters of Fortune 100 companies, private island bungalows and major sports venues in the U.S., Canada and Mexico.

At the University of Colorado, a bus shelter generates power and offers shade. In Houston, Texas, the NRG Stadium has solar-powered electric vehicle charging stations. In Valle de Guadalupe, Mexico, a winery generates 70 percent of its electricity and shade for its organic garden with a solar canopy. And in Denver, Colorado, a new high-rise apartment building wrapped its exposed stairwell in an 83-panel solar curtain wall.

All of those projects were made possible by the unique solar solutions that Lumos Solar provides.

“We are so fortunate,” Franklin says. “We really get into some incredible projects because of our unique application.”

The products are especially appealing to island-based clients in the Caribbean and Hawaii, where both shade and power are in high demand.

“Because of that we’ve gained some great word-of-mouth references and been part of some incredibly exciting projects,” Franklin says.

Based in Boulder, Colorado, Lumos Solar has a team of just five, and most of the staff has been with the company since day one.

“Our pipeline is super focused, and we’ve done a lot of work on standardization, so it’s easy for us to respond to architects’ queries and deal with architects in engineering and design,” Franklin says. “We can get a lot done and without having to keep throwing people at it.” 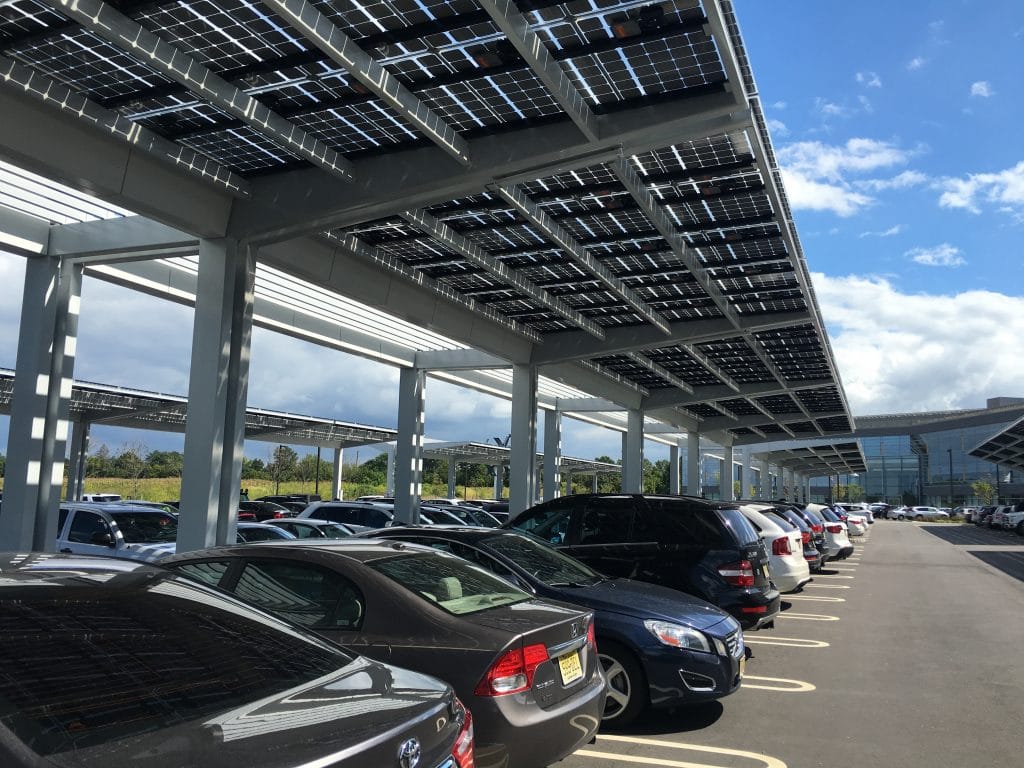 The company prides itself on creating a positive experience for everyone involved—customers, employees, vendors—Franklin says.

“The physical manifestation is these great projects that are in the ground,” he says. “They’re on buildings and facilities and campuses. Wherever they are, they’ll be there for 25, 30, 40 years. That’s what you can see and what gives you a lasting legacy, but what gives us a lot of pride is hearing from customers when they get the product.”

“We want the experience to be ‘wow’ up and down the line,” Franklin adds.

Solar is not Franklin’s first career. He started as a professional rock climber and was one of the first sponsored climbers in the U.S., and in time that translated well to a field that requires plenty of time off the ground.

“I feel so lucky and so fortunate that my whole young-adult life was spent in those kinds of places, going to some of the unique places of the world,” he says. “But you quickly realize these places are incredibly fragile, and if you don’t protect them, they’re gone forever.”

When Franklin stopped climbing full time, he began developing products for the climbing industry, but he wanted to design products that would address the world’s more pressing issues. He wanted to use his product development skills and experience, as well as his innate drive, to build a business where the more he sold, the better off everyone would be.

“Not that we’re trying to solve all of the world’s problems with one business, but I wanted to try to do something that could at least move it in the right direction,” he says.

The solar industry is not for the faint of heart, though. There’s pushback from oil and gas lobbyists, climate change deniers, even the current administration. But Franklin’s passion and driven personality keep him motivated.

“It’s not like you’re selling lawn chairs or copy makers,” he says. “You start talking about solar and everybody’s got an opinion, and they get very wound up about it. It’s very political automatically. I think that just adds to the complexity.”

To Franklin, it makes no sense that, in an age in which we have the technology to generate solar electricity, we still rely so heavily on fossil fuels.

About mountain top coal removal and other natural resource extraction processes: “I think those are crimes against humanity, and I think in time those activities will be seen for exactly what they are.”

Keep on the sunny side

Still, Franklin’s outlook is bright. The thing about science that’s so cool, he says, is it doesn’t care if you believe in it or not. For his part, he’s sticking to the facts and sees a huge demand for solar and other renewable energies in the U.S. and abroad.

Lumos Solar, after all, has a steady stream of work, and it has begun to partner with its first public utility, Florida Power and Light. Partnering with a utility has been a long-time goal for the company, as utilities are a major pipeline to end users.