The science of adding sound in order to create quiet

A day at the beach is how Niklas Moeller would introduce the concept of sound masking. Even though it’s far from silent, it still feels quiet. Ambient sound from the wind and breaking waves mitigate the noise of loud beachgoers, traffic or machinery. Similarly, in built environments, sound masking technology uses a specific type of sound to cover noises that would otherwise make it hard to concentrate, have privacy or be comfortable.

Moeller is vice president of K.R. Moeller Associate Ltd., a global designer and manufacturer of sound masking technology based in Burlington, Ontario, Canada. The company’s LogiSon Acoustic Network is used to make offices, healthcare facilities and many other workplaces—even military spaces—just the right amount of quiet, which helps keep employees focused and productive. 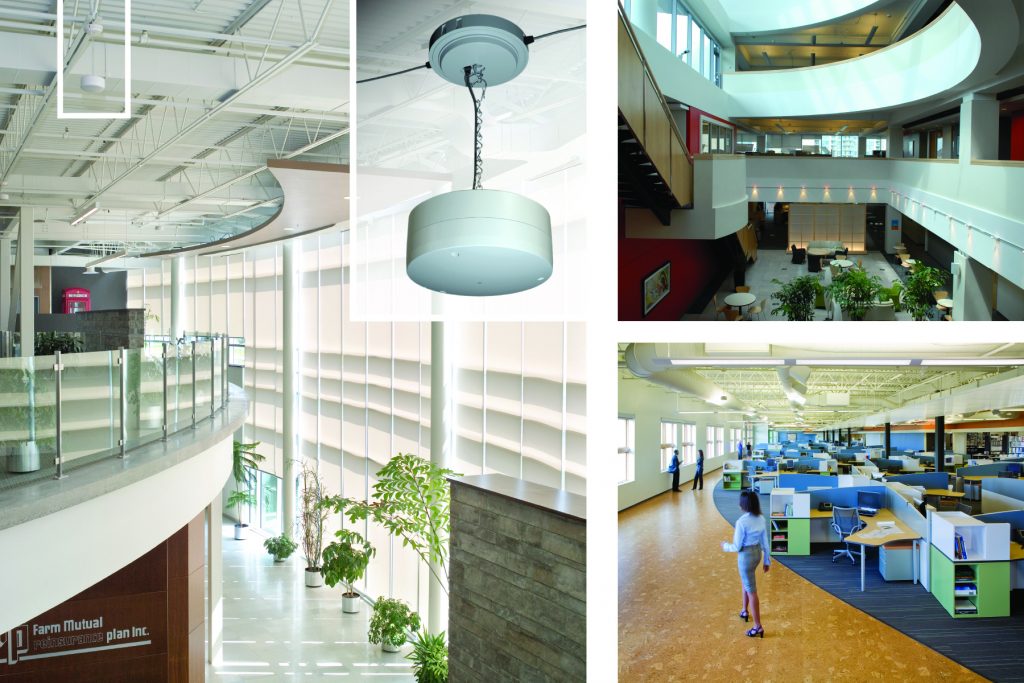 “If you look at the results of surveys concerning the work environment, noise—particularly intelligible speech—nearly always tops the list of irritants and distractions,” says Moeller. “And yet, when planning a space, people don’t tend to think about acoustics. Or if they do, it’s a straightforward assessment, such as it’s too loud or sounds too harsh. But there are a lot of aspects of the acoustic environment that can affect occupants.”

Often, Moeller must explain to potential clients that effective acoustic design isn’t just about removing unwanted noises. That can lead to an eerie silence —or a “pin drop” environment in which it’s actually easier to overhear any conversations or unwanted noise, says Moeller. Instead, managing noise is about precisely controlling the type and amount of sound.

To do this, K.R. Moeller uses its LogiSon Acoustic Network to distribute an ambient sound, similar to soft airflow, throughout the workplace. This sound doesn’t eliminate noises, but reduces their disruptive impact, as well as the distance over which they can be heard.

The system relies on loudspeakers placed above the ceiling throughout the workplace. “Introducing sound masking throughout the space is the only way to precisely control this aspect of the acoustic environment,” says Moeller. A wall-mounted panel or computer software provide control over the LogiSon Acoustic Network’s settings, zoning and functions, including those for paging and background music.

Sound masking technology has been proven to improve work environments.  In fact, it can be so significant that introducing sound masking is one of the ways a building project may earn credits toward the WELL Building Standard. This new building certification is awarded to construction projects that create a positive working environment for the people who will occupy the space. Several elements of this certification focus on acoustic control, and the LogiSon Acoustic Network falls under that umbrella.

Because it can help meet these new standards, K.R. Moeller has been approached by several major organizations that want to install sound masking technology as a way to align with the WELL standard. These include the American Society of Interior Designers (ASID), which uses the LogiSon Acoustic Network in its new headquarters in Washington D.C., and CBRE, a Fortune 500 commercial real estate services company that uses the technology in its Toronto West office as part of its ‘workplaces of the future’ initiative.

“We can use the LogiSon Acoustic Network to meet all types of speech privacy needs, from office spaces to environments that are dealing with secure and secret communications.” – Niklas Moeller

The LogiSon Acoustic Network is also used in call centers, retail banks, and medical facilities. The system is especially popular in hospitals, whose staff and patients like the system because it allows for private conversations —which is necessary in order to comply with government regulations that require healthcare organizations to protect a patient’s personal information. Military facilities and embassies have also found the system useful in keeping conversation private.

“We can use the LogiSon Acoustic Network to meet all types of speech privacy needs, from office spaces to environments that are dealing with secure and secret communications,” says Moeller.

Despite the success of the LogiSon Acoustic Network, which launched in 2003, Moeller says many people still don’t understand the value of sound masking. “Education—through online courses, our blog, magazine articles and interviews—remains a key part of our company’s mandate,” says Moeller.

The challenges of open space

K.R. Moeller Associates Ltd. was founded in 1978 by Moeller’s father, Klaus Moeller, who discovered the importance of acoustics in a work environment while working for Quickborner Team, a German consulting company most often credited with developing the open plan office.

“Of course, once they opened up the space, one of the things that became abundantly clear is that acoustics is an issue,” says Moeller. It was easier for employees to get distracted by neighbors’ conversations, ringing phones and printers. These rampant noises caused many people to be less productive and have trouble concentrating.

Klaus Moeller started K.R. Moeller to provide solutions to these growing problems. Today, Niklas Moeller and his sister, Sabina Moeller, who also serves as vice president, continue this mission together.

Niklas Moeller says the solution requires understanding each space the company outfits, not just applying its sound masking technology in the same way for every project.

“Tuning to meet the specified spectrum throughout the space is critical to the success of any sound masking implementation,” Moeller says. “In order to make this process more efficient and accurate, we invented an application called TARGET, which automatically tunes the LogiSon Acoustic Network.”

In the past, clients asked K.R. Moeller to install sound masking systems in pre-existing buildings. Now the company is usually brought in much sooner, ideally when a building is being designed. Moeller says that the WELL Building Standard is one factor contributing to the awareness of acoustic control.

“Otherwise [a building] will miss out on opportunities to improve performance while reducing costs, and occupants will end up with an environment that isn’t comfortable and doesn’t support concentration.”