Chasing a dream—one floor at a time

From the moment Karen Hodson walked into CM Group’s former San Francisco office, she knew the vibe was all wrong.

Conference rooms unnecessarily clustered in the center demanded the most attention, making the open-concept desks surrounding them feel scattered and sparse. Adding to the effect, the office was just too big for the number of employees. Hodson remembers it feeling like all the energy in the room had been vacuumed up through one of the ceiling vents. 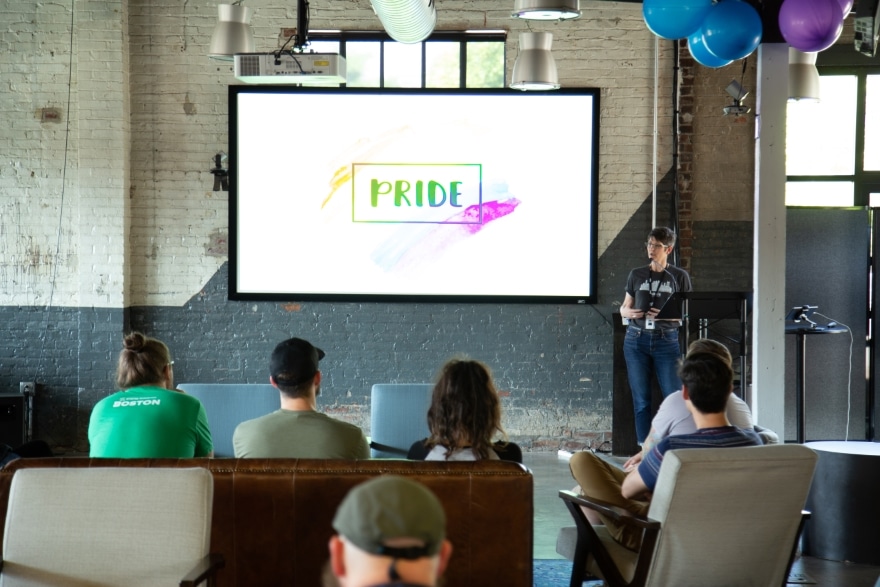 “Twenty-thousand square feet was more than what our headcount warranted,” recalls Hodson, CM Group’s vice president of global procurement and real estate. “That’s a challenge when you have a culture that encourages collaboration.”

This didn’t call for cosmetic surgery, or even a facelift. What was needed was a full-on transplant in the form of an entirely new space.

After nearly a year of searching and negotiation, Hodson and her team hit what felt like the corporate office jackpot: a 14,000-square-foot space on the 26th floor of a downtown building overlooking San Francisco Bay and its eponymous bridge.

It had enough space to add 25 employees to the current 75, but not so much that the current employees would be dwarfed by the size. In other words, it was the ideal place for a tech company like CM Group, which offers email marketing and automation tools for businesses of all sizes and verticals, to grow into. 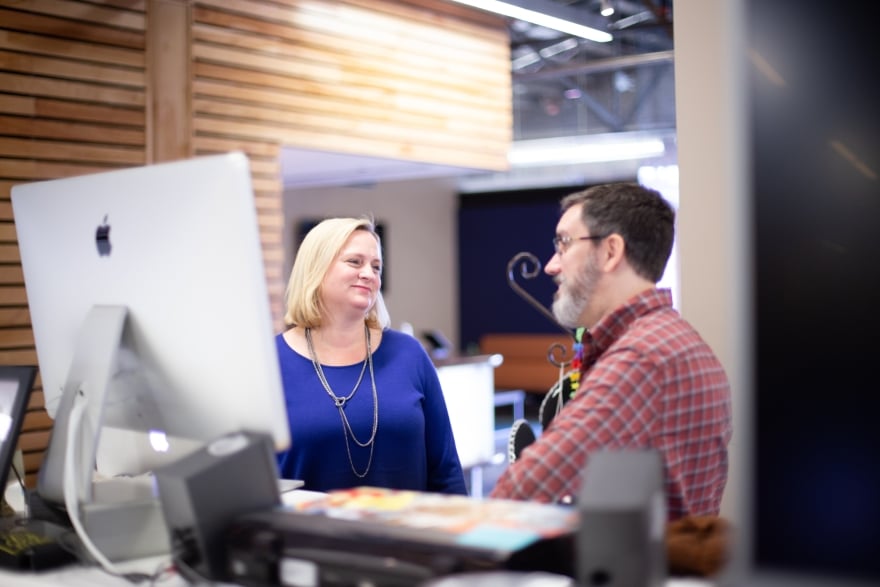 While the new digs included many of the same open concept features, recalibrating the space proved much easier (and significantly cheaper) than would’ve been the case if the business hadn’t moved.

Completed in late 2018, the space’s first fix involved creating a reception area and replacing the tables and swivel chairs in some conference rooms and offices with sofas and lounge chairs—ideal for client meetings and less formal office huddles.

Within the perimeter corridor, which once was filled with drab co-working desks, Hodson installed white sit-stand desks and mixed-use seating: wooden tables and chairs, as well as upholstered chairs and sofas with multicolor pillows for extra pop. The goal, she says, was to “encourage more collaboration across traditionally disparate departments.”

And practicality now reigns. Rather than taking up an entire meeting space for a call, employees can choose from one of six small phone rooms to get the privacy they need.

They also get organic interaction. “When you have good flow in an office space, you encourage more movement, which means more people crossing paths and getting to know one another,” Hodson says. “We designed it to be inviting and comfortable, but still conducive to work.”

To further encourage employee commingling, the design team expanded the centrally located kitchen by opening up one of its walls and adding a series of rustic wooden tables, making it more communal and less cramped.

Throughout, a classic white paint with accent walls featuring the company’s colors were chosen to complement the bountiful natural light; plants and artwork, used to accentuate each cluster of soft seating, helped make the office more inviting. 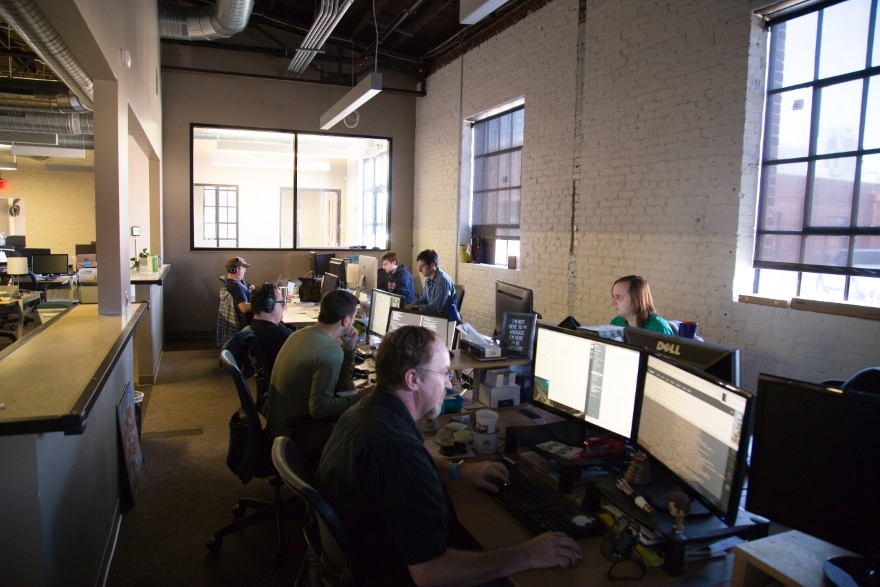 Some things did stay. Rather than replace the gray patterned carpet with something more contemporary like polished concrete, Hodson chose to keep it to muffle the sound of foot traffic. This was also a great way to reduce costs and shorten the build-out timeline.

If that sounds like the approach of someone who genuinely loves design, there’s a pretty good reason: She’s been doing it since she was eight years old.

Granted, the spaces she conjured up back then, box of colored pencils at her side, were more whimsical: houses with grand facades, futuristic buildings straight out of a Back to the Future II metropolis.

After graduating from Seton Hall University in 2001, Hodson spent six years working as an office manager and controller for a number of D.C.-area companies, where she learned how to administer contracts, manage finances and handle office operations.

“I learned to see things on a different level of detail,” Hodson says. “It taught me how to view real estate within a broader business context.”

Then, in 2007, Hodson began what she calls the “tech startup phase” of her career—an epoch that has carried through to her current role with CM Group.

One floor at a time

During her five-plus years with Opower, a Virginia-based software-as-a-service (SaaS) provider, Hodson scaled the ranks to contracts manager and procurement director, eventually overseeing everything relating to the company’s vendors. It’s also where she got her first taste of managing corporate real estate, handling multiple moves and build-outs and beginning a 10-plus year relationship with real estate brokerage JLL.

At Ellucian, a company specializing in software for higher education, Hodson helped negotiate nearly $900,000 in savings in her first year. For web-meeting SaaS maker Social Tables, she reduced outside-counsel fees by over 50 percent. 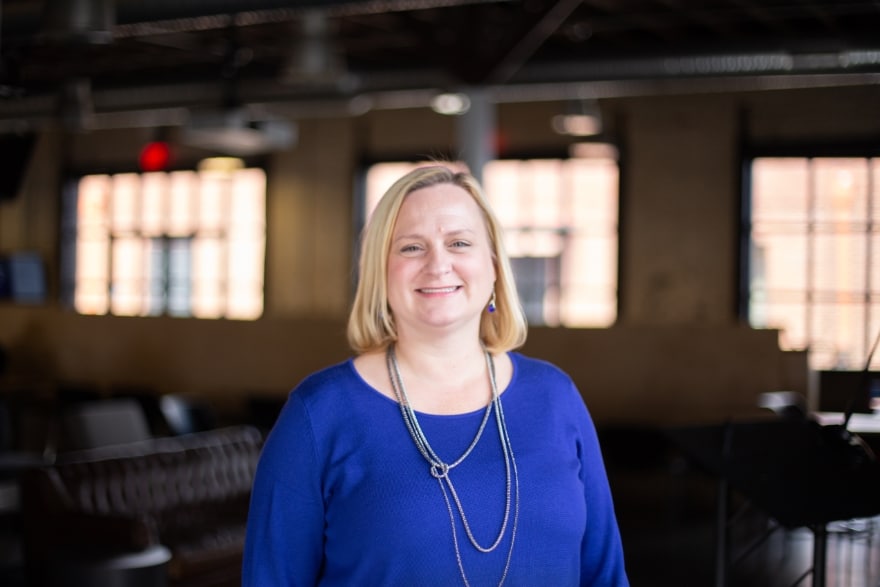 At FiscalNote, Hodson shepherded a headquarters relocation that more than doubled the company’s office space (from 8,500 to 20,000 square feet) and required a massive renovation.

“D.C. isn’t San Francisco; it was a lot harder for tech companies like ours to find open-concept office spaces,” Hodson recalls. “We ended up knocking down a bunch of conference rooms and completely transforming the space.”

Is it worlds apart from her childhood fantasies? Perhaps. But the philosophy remains the same.

“The whole process—finding a space, visualizing it, and seeing it through to completion—is one I’ve come to embrace,” Hodson says. “But the best is bringing in the employees and watching them thrive. Even if they don’t know all the work that went into it, seeing that makes it all worthwhile.” 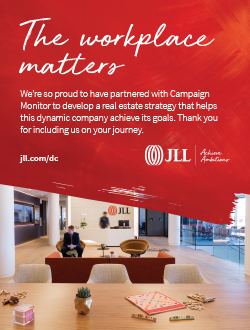