When patients in southern New Jersey need certain specialized cancer treatments, they usually must drive to Philadelphia, which can be time-consuming, stressful and inconvenient.

That’s why leaders at Virtua Health have spent the past several years developing the Proton Therapy Center in Voorhees, New Jersey, in partnership with Penn Medicine. 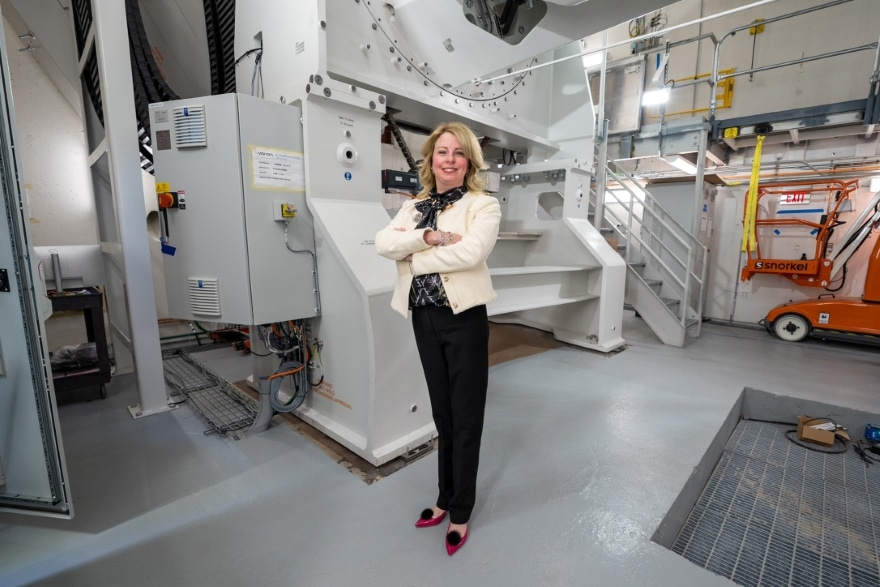 “There’s a comfort level for people needing this treatment to know they can get it closer to home,” says Julie Herb, Virtua’s vice president of real estate and development.

When it opens in late 2022, the 8,600-square-foot center will be the first to offer proton therapy in southern New Jersey. Proton therapy uses a precision laser beam to destroy cancer cells without impacting surrounding organs and tissues. It’s primarily used on cancerous tumors in sensitive areas, such as the brain, lungs or spine, where surgery would be too risky, although it can be used on many types of cancer.

According to Herb, who’s been involved since planning began in 2017, the center is part of Virtua’s goal to provide more community-based care. Headquartered in Marlton, the five-hospital system has more than 300 care locations throughout southern New Jersey and is continuing to grow.

“This new center means so much to Virtua, to me and to the community it will serve,” she says. “It’s a game changer to have this type of treatment in our community and enhances the level of care we can offer to patients.”

After helping Virtua determine that the Proton Therapy Center was financially viable, Herb and her team began planning the construction of the building. They wrote the requests for proposals, interviewed the respondents and hired designers, architects and builders.

While most construction projects in healthcare are complex, Herb says this build was especially so. The people she hired needed a deep scientific understanding of oncology and proton therapy, and she and the team often consulted with Virtua’s doctors. 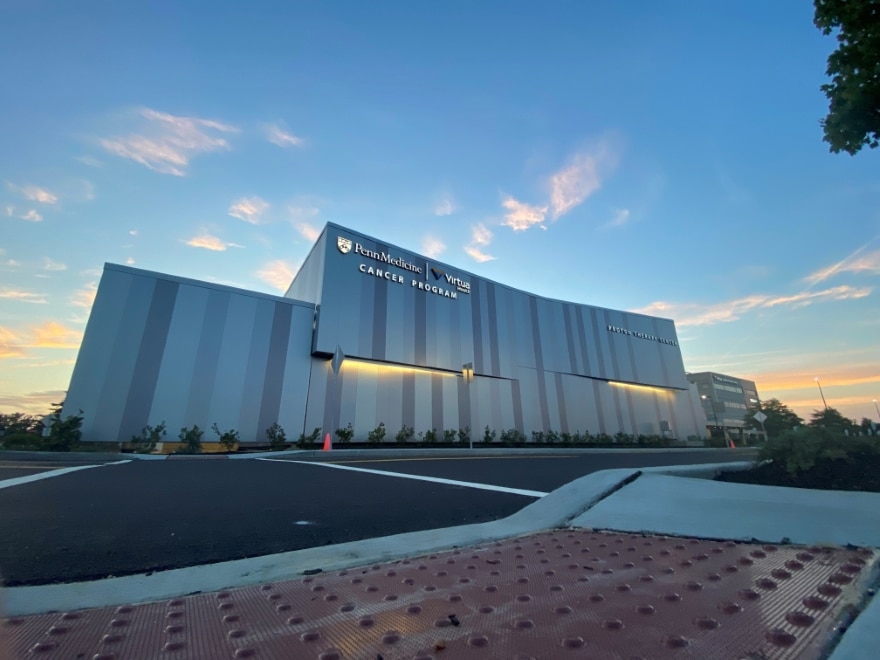 The central device is a 90-ton cyclotron that was installed via crane through the roof once construction was nearing completion. Shipped in from Germany, the device delivers the beams of proton particles that eliminate cancer cells. The cyclotron, as well as a gantry, treatment area and supporting infrastructure, sit within the vault, which required 10 pours of concrete to construct, Herb says. The high number of pours was, in part, due to the volume of concrete (3,402 cubic yards) and the varying thickness (8-21 feet) of the vault’s walls.

Once the cyclotron was in place and the roof of the building was finished, the machine had to be commissioned and calibrated, which was in process when Herb spoke to Blueprint in July. The year-long process is necessary to generate protons and ensure the machine works properly.

The Proton Therapy Center is expected to treat 200 patients per year, which equates to 5,000 treatments delivered each year. Herb says it’s fulfilling to know how many lives will be saved.

“I’m not the one who cures someone’s cancer, but to build the facility that will make this treatment possible so close to home, it means so much to me,” she says. “I believe the real estate and development department plays an integral part in Virtua’s commitment to providing world-class care.”

A few years ago, Herb and her team began working on the Virtua Midwifery Birth & Wellness Center, which opened in October 2021. The 7,800-square-foot freestanding natural birthing center, which is the first in southern New Jersey, was built adjacent to Virtua Voorhees Hospital.

The center, which is an option for people at low risk for pregnancy complications, doesn’t replace the Virtua Voorhees maternity ward. Rather, it provides a new service for people seeking a less clinical birthing environment, which many patients had been seeking. 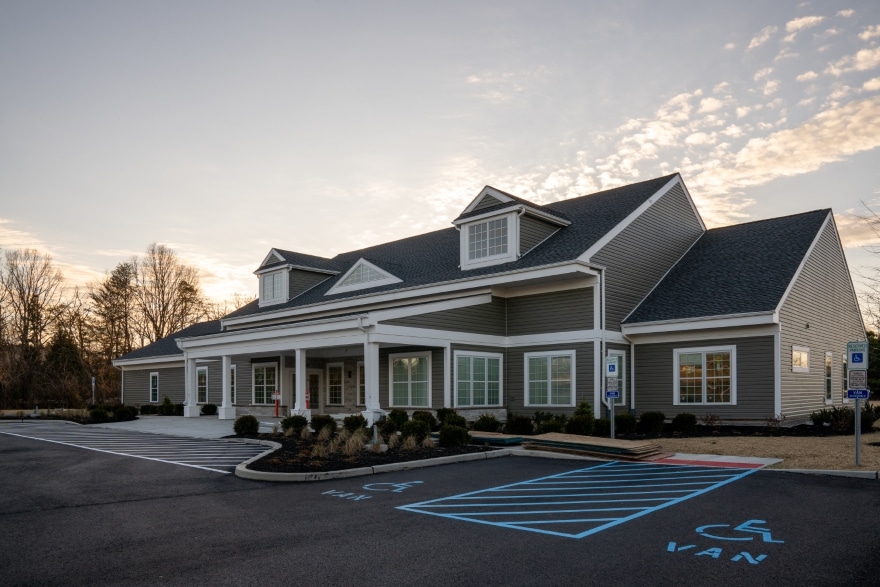 The three delivery suites each have a queen-sized bed, a walk-in shower, a birthing pool, and an outdoor patio. Families can gather in the kitchen or communal living room area. There are also areas for patients to meet with midwives for pre- and post-partum care as well as routine wellness care, including screenings, counseling and consultations. There is also a large community room for educational classes and support groups.

“Aside from the benefits of helping people, I really enjoy seeing something come together from a greenfield site,” Herb says. “It’s fun and exciting to get to the finished product and turn it over to operations so it can be used by patients and staff.”

Building her own path

Despite making things since she was a child playing with Tinker Toys, Herb didn’t initially pursue a career in construction.

She went to Franklin & Marshall College where she earned a bachelor’s degree in government before later earning a graduate degree in business administration from the Wharton School. While feeling uncertain about her career path, she ended up working for a developer in New Jersey that built offices, hotels and retail spaces. 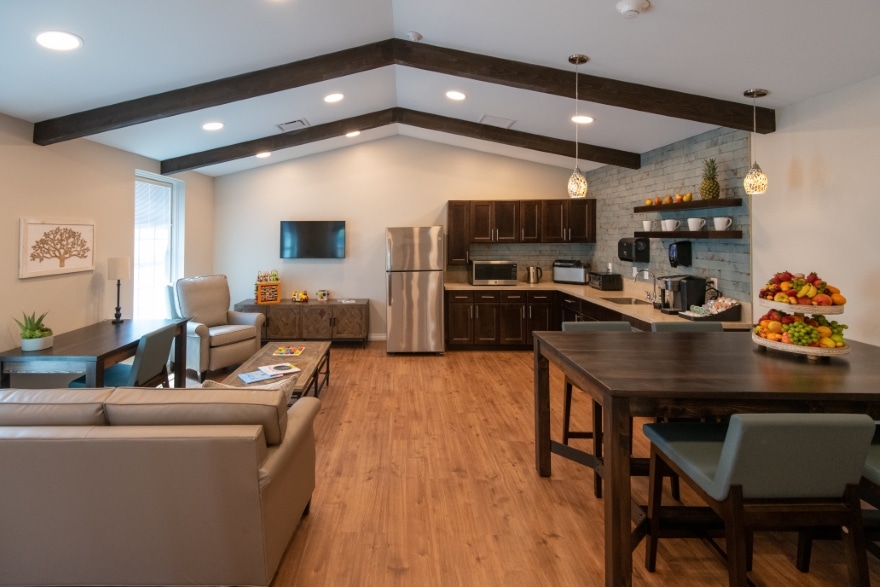 “I didn’t realize at first that this was an option for me,” Herb says. “Over time I’ve noticed more women in the field, which I think has happened organically as more have realized the opportunities available.”

From there, she became interested in real estate and took a role at the Einstein Healthcare Network in Philadelphia. In 2011, she joined Welltower Inc., which develops and manages medical properties, as a senior real estate and development manager for the Northeast region. It was in this role she first worked with Virtua before being hired by the healthcare system in 2015.

As Herb has risen from director of real estate to the vice president of facilities development and now to her current role overseeing real estate and development, she’s become more assured and outspoken about women’s roles in the construction field.

“Virtua has an exemplary leadership team that truly cares about not only the community, but employees,” she says. “As a woman, I’ve never felt overlooked or disregarded at Virtua. I feel valued and supported.” 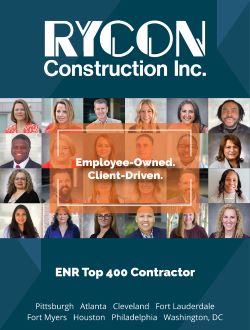