Nobody is sure exactly when Lawndale Christian Health Center’s Chief Medical Officer Dr. Wayne Detmer and Windy City Harvest’s Program Director Angela Mason met, but one thing is for sure: their collaboration bore fruit and is helping to feed the City of Chicago.

That’s when Detmer stopped by to investigate the thriving vegetable garden being tended by local gardeners involved with the program, which operates youth farms throughout the city—including the one at that location. Detmer learned from Mason that participants were taught how to grow produce, which was harvested and sold in neighborhoods identified as “food deserts”—areas with limited access to nutritious food. 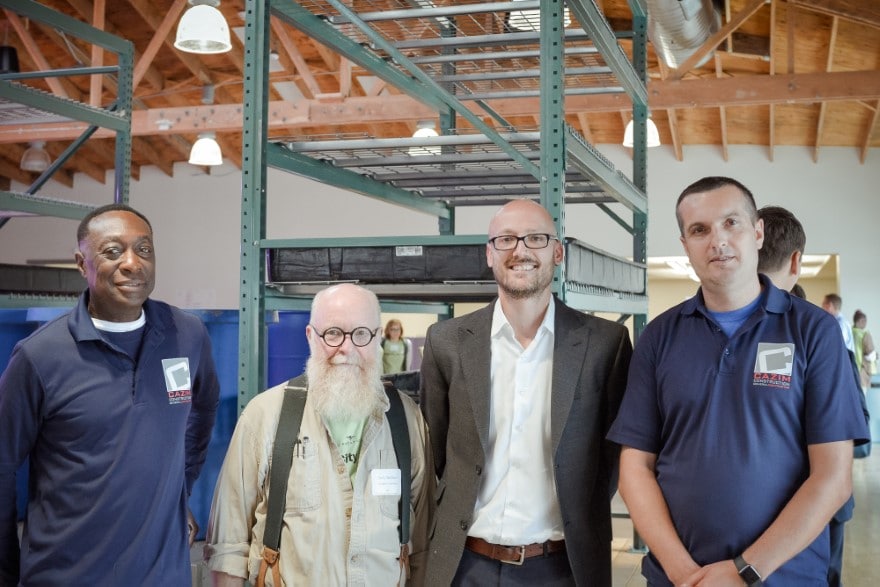 “The two stayed connected over the years and at some point conceived the idea of expanding the farm,” Lesch says.

Fast forward to 2015 when the clinic sought to buy the adjacent building from the Lawndale Christian Community Church, the organization which founded the clinic in 1984.  At that point Detmer, Lesch (its registered architect) and Mason started fleshing out concepts to renovate the property into a year-round urban farm.

“The fact these two organizations with similar goals would team up was something special,” Lesch says.

The design would focus around an aquaponics growing system, which uses fish waste to fertilize vegetables growing on water rafts.

“We began to examine what it would mean to install this system on the site,” Lesch recalls. “While it took more than a year of studying feasibility, it was those earlier years of dreaming that laid the foundation for success.”

In 2016, the Lawndale team made its move, purchasing the building, which included eye-opening architectural potential: well-preserved, 50-foot-long arched wooden bowstring trusses, a popular Chicago building type during the 1930s and 1940s.

“What this meant for us architecturally is that we could create a vast flexible-use area adjacent to the greenhouses while showcasing an inherently beautiful structural feature,” Lesch says. 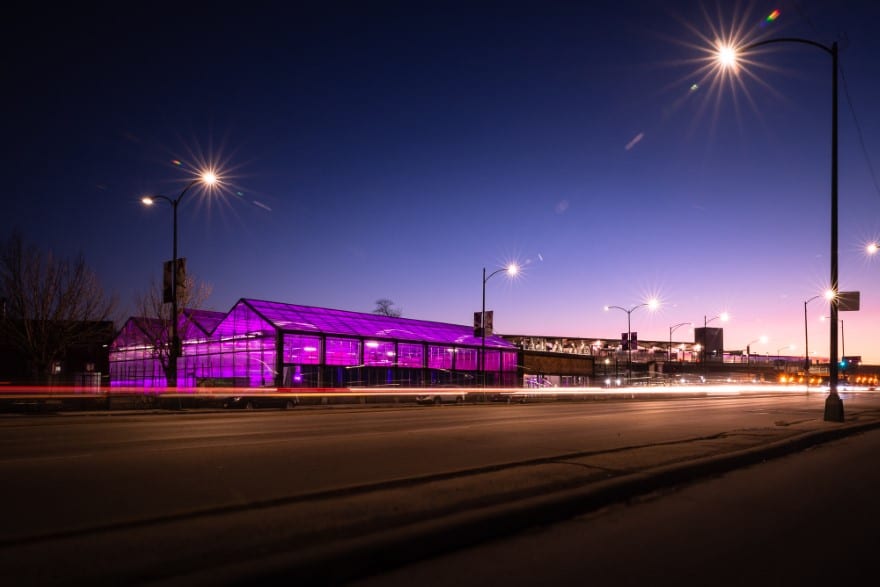 According to Lesch, the venture dovetailed nicely with Lawndale’s evolving holistic approach to healthcare. The nonprofit had years earlier launched a fitness center and cafe—featuring locally-roasted coffee and healthful food—to complement its medical, dental, optometry and behavioral health offerings.

“It’s more than a doctor’s visit when you come to Lawndale,” Lesch says. “We want to care for the whole person,”

Prior to starting the work, the building needed attention. The existing interior structure was sandblasted, removing layers of paint to expose the truss wood and brick. Extensive black mold in the old drywall partitions and insulation required considerable cleanup and a two-story building adjacent to the bowstring structure had to be demolished.

“We had to see what we had before getting started to minimize any surprises,” Lesch says. 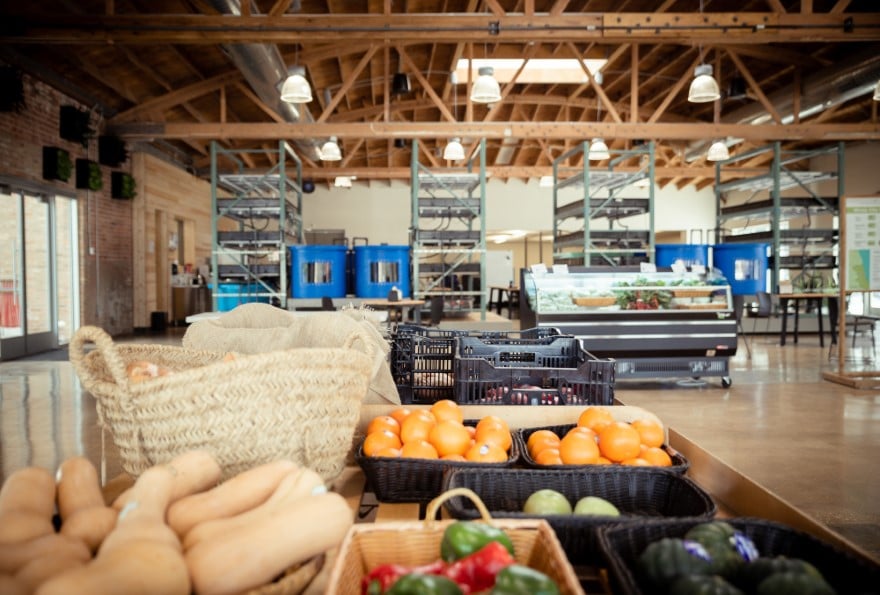 Still, some challenges couldn’t be avoided. During construction, the team discovered a massive telecommunications duct under the sidewalk that couldn’t be moved. This meant Lawndale would need an easement from their neighbors to access sewage and water. Other problems included soil contamination and a tank buried beneath the building.

“Construction was mostly smooth sailing, but the telecommunications duct was a new one, even for Chicago,” Lesch says.

Dreaming it into reality

After nearly a decade of visualizing, brainstorming, fundraising, permitting and approvals the $4.2 million project—known as the “Farm on Ogden”—opened in May 2018.

To be sure, the modernized industrial-style brick, steel and glass building that now occupies the property—replete with Windy City Harvest central offices and a market space adjacent to its greenhouses—is a far cry from the neglected structure the team initially encountered.

Drive past the site now at night and you’ll see 7,300 square feet of greenhouses lit up with purple grow light that spills into the bowstring building. Inside, bright blue tanks house the tilapia—fish providing fertilizer for floating rafts of bright green vegetables and herbs. 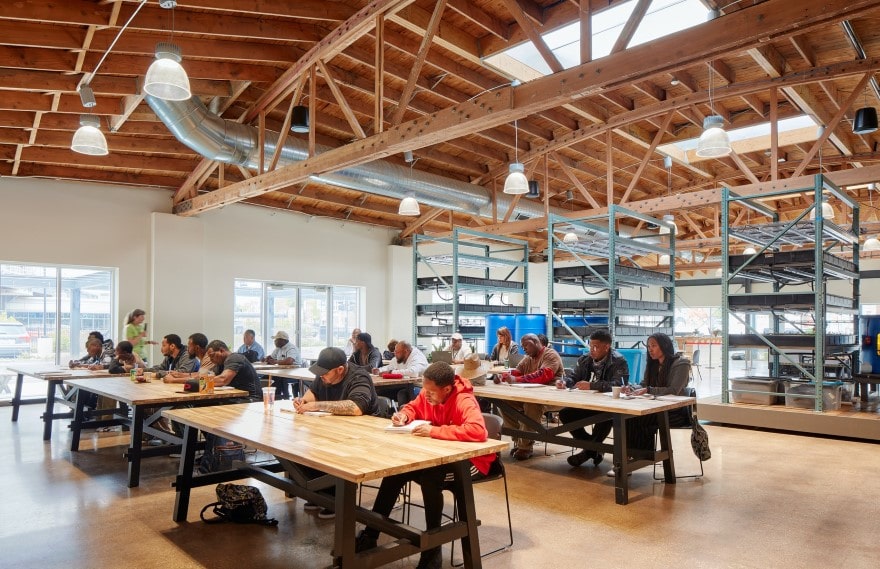 The west end of the greenhouses opens into the 5,000-square-foot open-plan facility filled with natural light and crowned with the trusses. This area houses the small corner market and education space. Just off the bowstring space are the offices, the commercial kitchen and a food packaging and distribution area.

Once the vegetables and fish are harvested, about half of the produce is sold to local restaurants, while the other at lower prices in low income communities.

“It’s a project that has proven to be wildly successful, complementing Lawndale’s approach to healthcare by offering a healthy food option for its residents and patients,” Lesch says. “The additional benefit of job training for ex-offenders also helps advance the clinic’s role as a job creator in the neighborhood.”

The combination efforts earned the Farm on Ogden the 2019 “Distinguished Building Award” from Chicago’s Chapter of the American Institute of Architects.  It also became a tour site during the Chicago Architecture Center’s 2018 open house, attracting visitors from around the world.

The project played to Lesch’s passion for architecture, which he traces back to his childhood and later manifested into his studies at the University of Wisconsin-Milwaukee. The love of “developing beautiful, thoughtful spaces” is something he shares with his wife, Sarah, who is also an architect and who designed the clinic’s cafe. 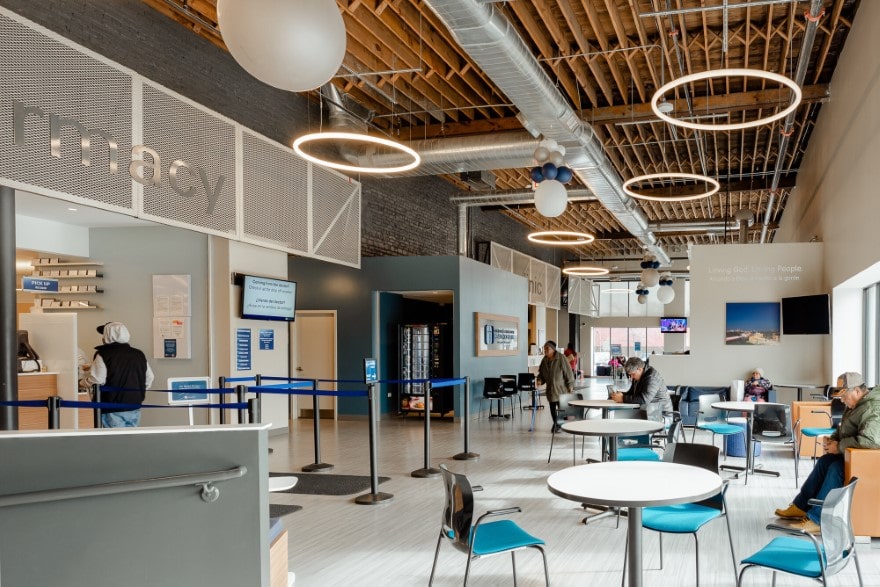 Up next, Lesch will be working on revitalizing another recently acquired neighborhood landmark building known as “The Castle Car Wash.” Lawndale is also currently renovating its 10-exam room clinic within Chicago Public School’s Farragut Career Academy and has several other projects on the boards.

As an architect, Lesch says his greatest joy comes from playing a part in the transformation of any place. Who would have thought, he says, that fresh fish and vegetables would thrive on this forgotten site.

“I’m driven to make spaces that people love,” Lesch says. “It’s nice to facilitate positive change that goes beyond fulfilling any stated program objectives. I think people feel valued when you create a beautiful place specifically designed for them.” 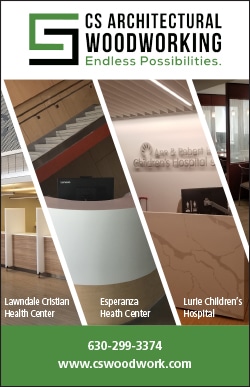 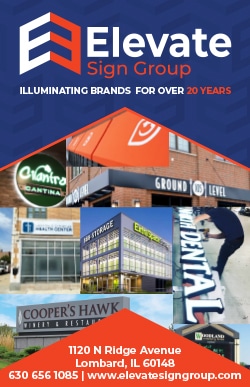 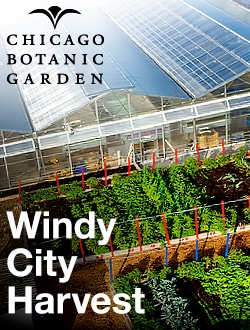 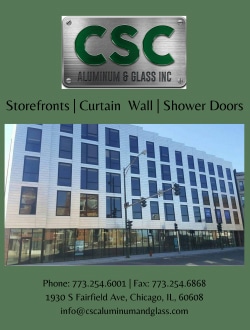