The rest of us can say hello to Jonathan Overacker, the director of facilities and engineering for Riverside Healthcare in Kankakee, Illinois. Not only was Overacker born at Riverside Medical Center, so were two of his four children, and his father worked there for 40 years.

But there’s little time for nostalgia these days, not while the Riverside system is confronted by the COVID-19 pandemic and bringing new hospital heating and cooling systems online after years of planning and building. 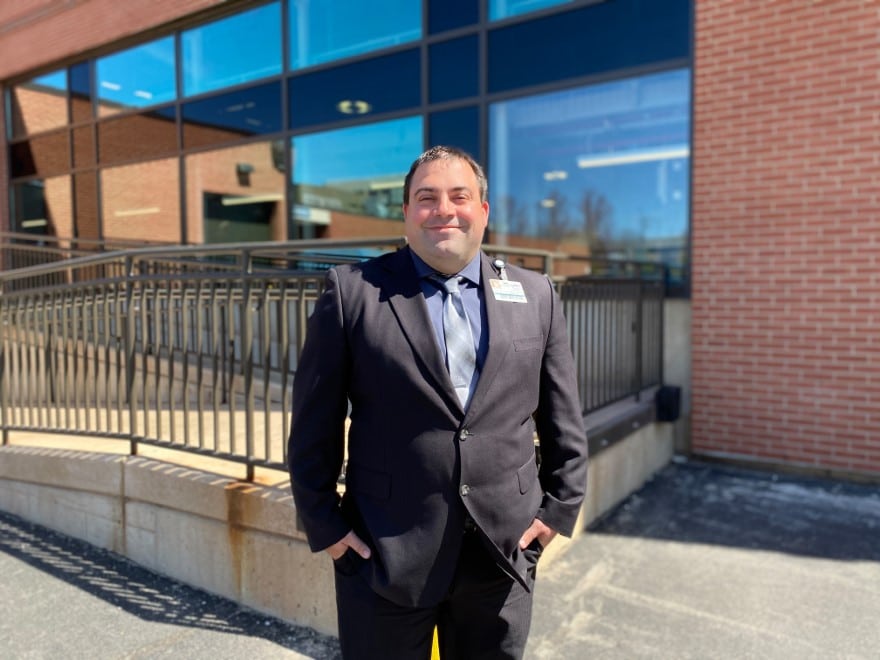 “We’ve been incredibly busy since the beginning of March,” Overacker says. “At the same time, the team we have in place is helping us ease through this, too.”

Riverside Healthcare is a fully integrated health care system anchored by Riverside Medical Center, a 300-bed hospital providing a full scope of inpatient and outpatient care. Since opening in 1964, Riverside has expanded to serve patients in five Illinois counties. Services include heart care, cancer care, neurosurgery and orthopedics as well as a network of primary, specialty and immediate care providers and locations.

Overall, Overacker manages more than 2 million square feet of facilities and a team of 42, including three managers, a project coordinator and an administrative assistant. 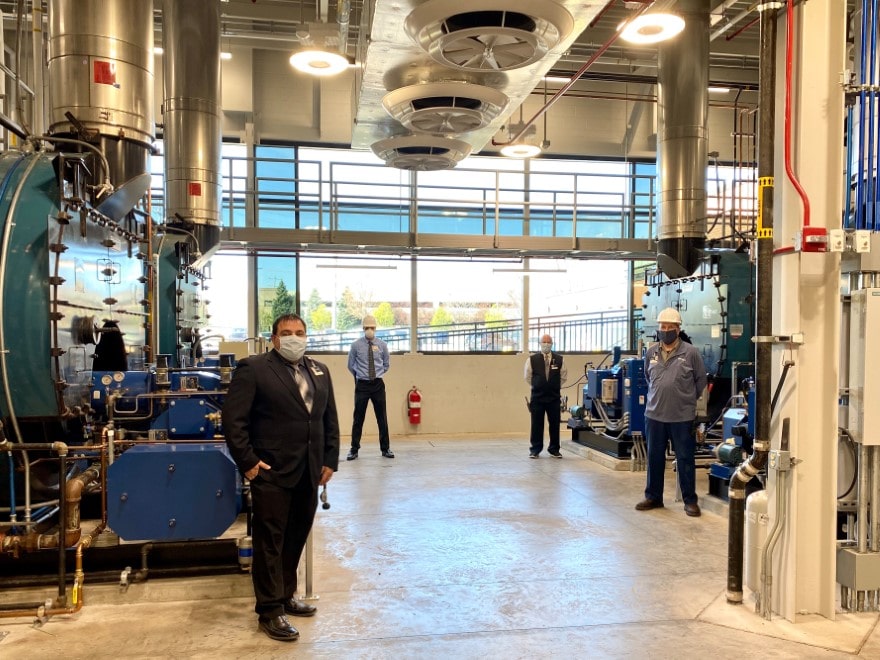 To prepare the hospital for COVID-19 patients, Overacker has been working with his staff and vendors to modify the HVAC system. In particular, they are enhancing the air handlers to draw more air out of the hospital’s East Tower than comes in. This negative pressure helps prevent the spread of the virus.

Along with altering the air flow in rooms set aside for COVID-19 patients, Riverside Medical Center has stopped allowing visitors, and the skilled nursing facility and assisted living residential facilities were locked down.

Overacker explains that Riverside’s employees are following all recommended safety and hygiene practices recommended by the U.S. Centers for Disease Control and Prevention. A universal mask-on protocol has also been activated for all employees, including clinical and non-clinical roles.

While COVID-19 preparations and precautions took precedence, a $13 million upgrade of the Riverside Medical Center’s utility plant was nearing completion. It’s an instance of preventative work, a project three years in the making that has been carried out with no disruption to hospital operations, Overacker says.

As part of the work, the hospital’s original three 55-year-old boilers are being replaced by four 350-horsepower boilers installed in a newly constructed room. They’re still powered by natural gas with fuel oil as a backup, but the boilers and new controls are built to run more independently of each other to serve hospital areas as demand requires, saving energy in the process. 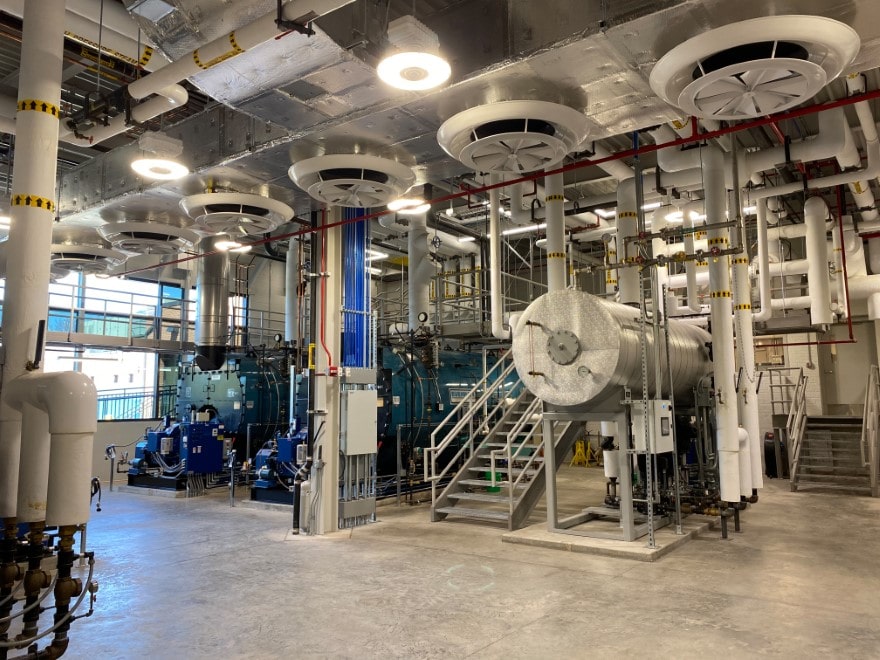 “I think it’s more fun with these advances,” Overacker says. “We may never even get to the full potential of everything.”

“We can run them at varied power levels and see the water flows for the system in the control room,” Overacker says.

The system also recycles 85 percent of the water coursing through it, he goes on to say.

It adds up to operations that could qualify the system for an Energy Star rating from the federal Environmental Protection Agency and Department of Energy. That’s not a frequent occurrence in the health care industry, Overacker notes, because of the high energy demand in hospitals.

He plans to measure system operations for a year, then apply for certification to show it performs better than 75 percent of systems in similar buildings nationwide. 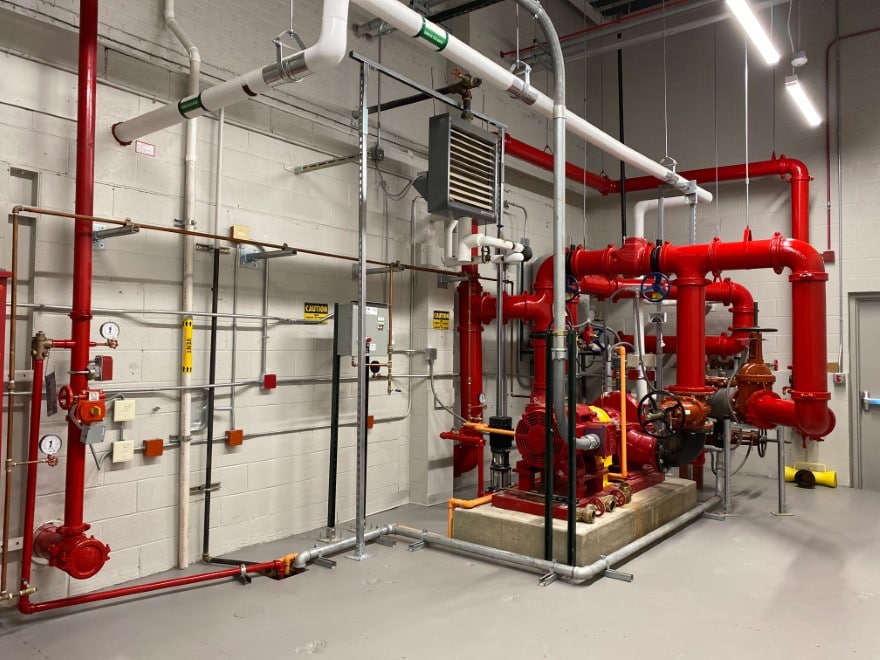 The old boiler room is not getting abandoned, either. In fact, it’s going to chill out because new water chillers and coil systems supplying cooled water for the hospital will be installed in place of the old boilers.

The two new chillers each have a 500-ton capacity, up from the 400 tons in the old chillers. The increased capacity and new pumps also run more efficiently than the systems they replace, Overacker says. A 20-year-old 1,000-ton centrifugal chiller was also replaced with a new one of the same capacity as part of the central utility plant upgrades.

Bringing change to the familiar floors and rooms at Riverside Medical Center has been rewarding for Overacker, even in the face of a pandemic.

Yet Overacker did not set out to follow his father, who was a biomed technician, into a career in health care. Instead, he studied to become an electronic technician, and eventually landed a job at a local company.

The company was bought out, then closed, leaving Overacker to explore other opportunities. 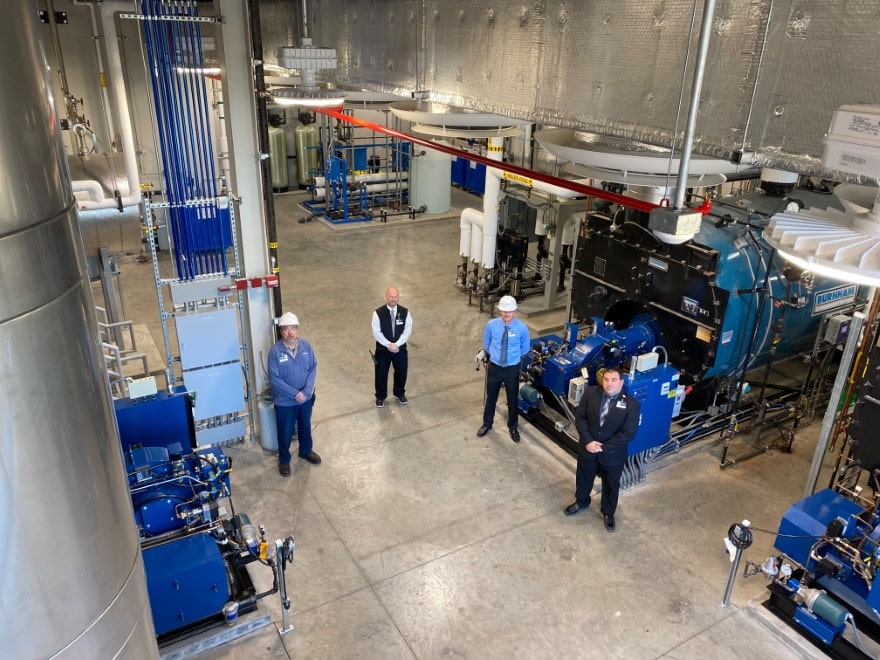 Hired by Riverside Healthcare in 2007, Overacker has worked his way up the ranks, becoming a manager in 2014. In 2016, he was named interim director for the same areas, as well as interim director of facilities. The roles merged with his promotion to his current job in August 2019.

As he directed those areas, Overacker also earned a bachelor’s in business management from Western Governors University in 2019.

Jon, his wife, Jen, and their four children live within the community and enjoy a very active life, as well. Much of it happens outdoors – he and his family enjoy boating, camping and snowmobiling, and he coaches his kids’ baseball and softball teams.

Not everyone can be so well rooted, and Overacker takes great comfort in it.

“I think that’s what makes it really good here,” Overacker says. “I work with the people I grew up with every day. My connections drive me in this job, these are people I’ve known and we’re still a community hospital.” 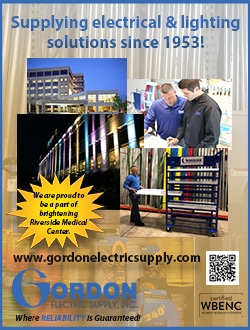 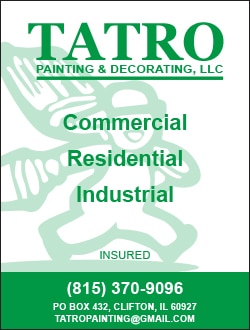