Jon Papps likes to joke that he was the first person in history to bring the University of South Carolina and Clemson University—heated rivals whose football teams have divided the state for more than a century—together for a common cause.

The mission: to save lives and improve medical care in one of the state’s largest cities.

The method: a two-level, 8,000-square-foot, amenity-rich corridor of brick and glass bridging the University of South Carolina School of Medicine (USCSOM-G) and Clemson University Nursing, both located in Greenville. 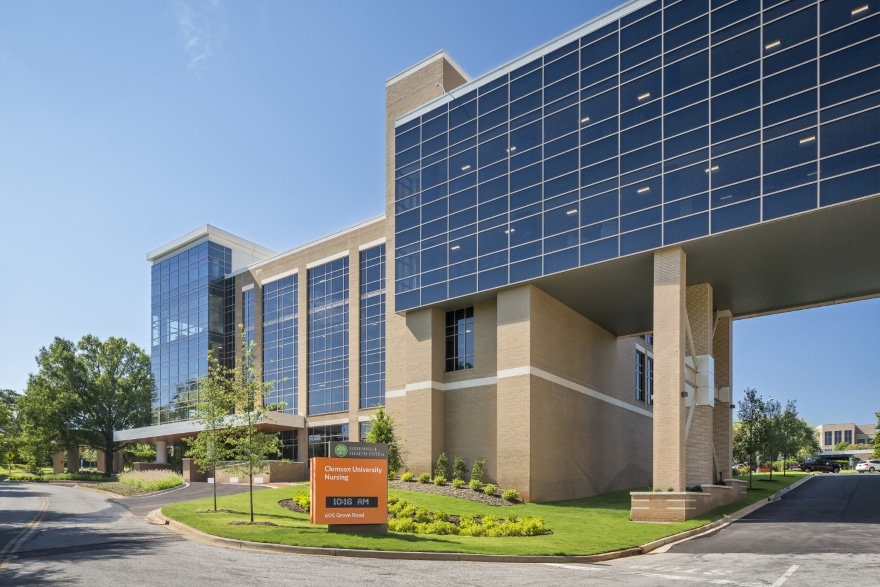 Opened this past August in conjunction with the brand new, $38 million nursing school, the street-spanning connector promises to be a game-changer for the region. Albeit not in quite the way many Gamecock fans might hope.

“I’m not sure this does much to level the playing field between the football teams. Clemson’s pretty good,” Papps says with a laugh, referencing the school’s two recent football National Championships. “But it is going to usher in some incredible collaboration between the two facilities, and that’s what’s most important.”

According to Papps, director of facilities development for Prisma Health, the new nursing facility and attendant connector are part of a larger effort to address the state’s critical nursing shortage, while providing a collaborative conduit to USCSOM-G.

Supported by a series of brick pillars and featuring glass facades on both sides, the connector allows staffers from both facilities to share equipment without having to expose it to outside elements—including USCSOM-G’s fleet of cutting-edge medical manikins worth tens of thousands of dollars each. 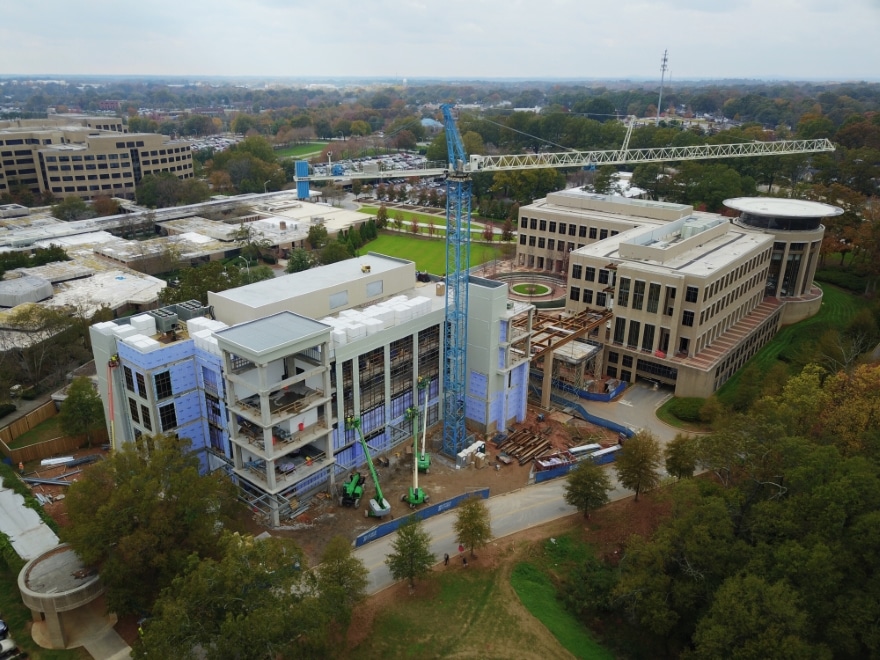 On the first floor, totaling 3,500 square feet, a combination of individual offices and conference rooms (all with brightly-lit views of the tree-peppered surroundings) allow for collaboration between the two management teams.

Meanwhile, a spacious second-floor meeting area—complete with 80-inch TV—gives students a place to meet, study and unwind. All is supported by state-of-the-art fiber optic cable.

“When you’re doing medical training in the field, there’s always a doctor and nurse, but there are very few places where those two functions are brought together the way they are here,” Papps says. “We designed the space to encourage them to go back and forth, to see how the other side works and exchange ideas.”

For Papps, figuring out how to connect Clemson University Nursing and USCSOM-G—the former four stories and compact in its footprint, the latter three stories and much more sprawling—was no easy task.

Thankfully, he had the perfect resource ready at hand: his own blueprints.

The inside that counts 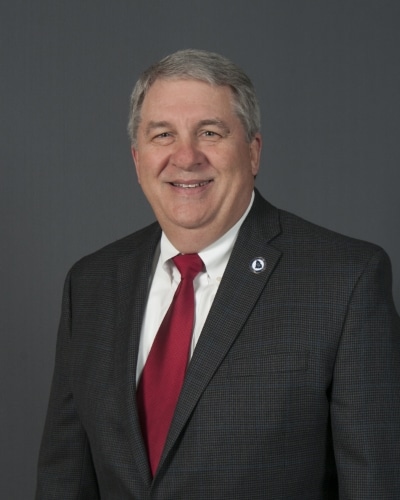 After months of back and forth, the school agreed to move into the new space, provided Papps and his team could deliver.

“It was by far the biggest project I’d done for Prisma Health to date,” recalls Papps, who joined Prisma (formerly Greenville Health System) in 2009 after more than three decades in construction management. “When we gained accreditation, we were the 144th School of Medicine in the US. That being said, there are not many people alive today that have ever built a school of medicine and, to my knowledge, no one has tried to connect a school of medicine and a school of nursing.”

After adding a new roof and completing a top-to-bottom culturing of the building—removing molded panels, resealing interior and exterior surfaces—Papps and his team set their sights on making the space a paragon of modern medical technology.

The cornerstone: more than 60 miles of shielded fiber optic cable (running north of $1 million), enough to accommodate multiple devices for each of USCSOM-G’s 400 students, along with a new DAS antenna capable of supporting every major wireless carrier.

But it’s the school’s medical simulation infrastructure—encompassing close to 30,000 square feet, approximately 15,000 for each school—that Papps is most proud of.

In the past, virtually all procedures conducted in the medical school environment involved a live patient (surgeries included). Featuring everything from synthetic organs to pumping blood, high-fidelity manikins allow students to observe and practice more of these high-risk surgeries in a safe and controlled environment.

What’s more, a series of control centers—built and wired by Papps and his team—gives physicians the ability to both control the manikin’s behavior and relay information to any area of the hospital instantaneously, including video recordings of the surgery.

“The network is strong enough to support terabytes of live data at any given time,” Papps explains. “And we let the students access that data for the four years they’re in school. It’s the kind of resource that would’ve been unthinkable just a few years ago.”

Owing to the success of USCSOM-G’s simulation program, Papps and his team knew that similar technologies were necessary when it came time for Prisma Health to build the $38 million, 78,000-square-foot Clemson University School of Nursing building.

Begun in 2017, the facility was designed to mirror a hospital environment, complete with virtual reality IV simulators and high-fidelity manikins. In addition, Clemson University School of Nursing features the largest auditorium in the Prisma Health System—11 classrooms, 70 offices and numerous collaborative spaces.

According to Papps, the USCSOM-G has seen an increase in the number of medical school enrollments, from 50 in the fall of 2012 to approximately 100 per class today.

The Clemson University Nursing program now has 630 undergraduates split between Clemson and Greenville, with plans to grow to 900 students in the next few years. In addition, there are 130 graduate students studying in Greenville.

“That, to me, is where we’ll see the biggest impact,” Papps says. “When you have the nursing shortage South Carolina has, every little bit helps. But this is more than a little bit. This is going to help save a lot of lives.”

Not that Papps has time to rest: Together with DPR Construction, a longtime Prisma Health partner that’s consistently been ranked one of the top 50 general contractors in the country, Papps and his team are hard at work on a massive expansion of Prisma Health’s Behavioral Health Center, located right down the road from the schools.

According to Brandon Scott, project executive for DPR, once completed in 2020, the 65-bed facility will be one of the region’s largest and most advanced.

“Jon really has a passion for the preconstruction side, and with a space like this, where everything is being built from scratch, that gives him a lot of freedom in terms of materials and methods,” Scott says. “We’ve worked with Jon on a number of different projects, and we’re excited to be working together again.”

For Papps, the project represents a watershed moment for Prisma Health—a harbinger of growth and good works to come.

And yet, there isn’t a day when Papps doesn’t steal a glance at the plaque on his wall, the one with his name and a picture of Clemson University School of Nursing with the words “Steward of dreams come true; on time, beautiful, welcoming.”

“I’ve been in this business going on 40 years, and I’ve never gotten anything like that,” Papps reflects. “To know Clemson was so thrilled with how it turned out, the fact that it was on time and within budget—it means a lot.” 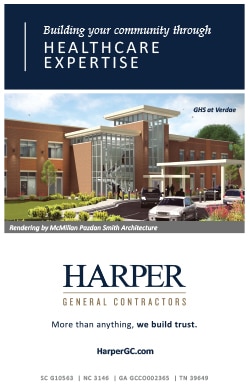 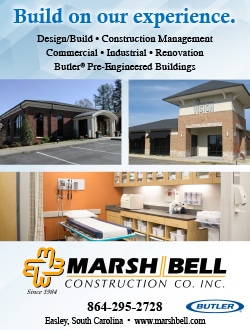 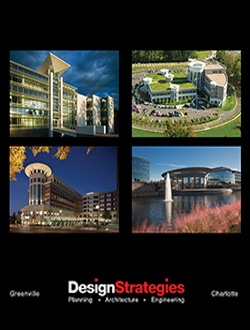