Centered on the center of campus

Once Rochester Institute of Technology president David Munson became familiar with the college’s widely recognized mid-century modern campus, he realized there was much about the character of the institution that the sculptural brick walls concealed rather than celebrated. He envisioned a new, sprawling and state-of-the-art campus centerpiece as a transparent and transformative addition. 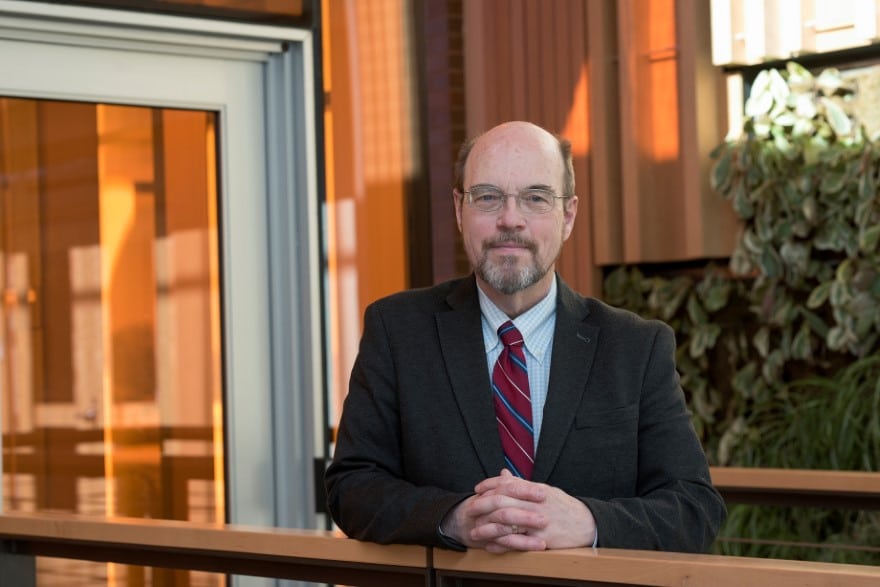 Munson appointed long-time architect and RIT’s Planning and Design Director Jim Yarrington to chair a diverse committee to explore the idea—the group completed its report late last year—and hired the team of William Rawn Associates in Boston and HBT Architects in Rochester to design the project.

The planned Innovative Maker and Learning Complex will be a place for students from all disciplines and programs to gather, learn, share ideas, innovate, “make” and celebrate everything that makes RIT a special place; a university that fosters innovation at the intersection of design and technology, Yarrington says.

Due to COVID-19, there was the temporary suspension of some planned construction and renovation projects, but design work continues for the Maker space—a music performance theater, athletic facility improvements, a cybersecurity program building, business school expansion and a new campus master plan.

“We’re fortunate here to have lots to do, and we’re able to work effectively remotely,” Yarrington notes. “We have several game plans depending on what the environment allows, but overall, we’re doing okay.”

The $105 million Maker project is Yarrington’s biggest to date at RIT. Although it currently exists on blueprints, he is optimistic that the facility will be completed in a timely fashion and ready to open in 2023.

Like other projects championed by campus leadership, this space will represent a departure from the traditional Belden brick RIT is known for. Instead, the building will have a glass exterior that will be more efficient, while also enabling anyone passing by to see the innovation and learning going on inside. 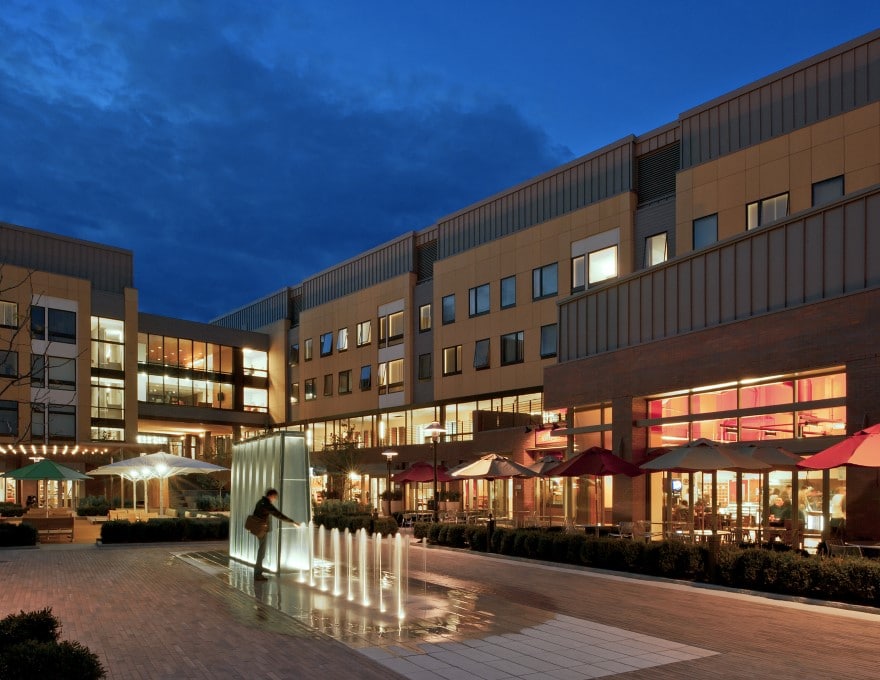 “The idea is that it would be a fulcrum of RIT’s making, creating, designing and inventing activity and also a major academic center,” Yarrington says of the building, which will be in the center of campus near the Eastman Kodak Quad, library and student union. “This will still have all the views [of the surrounding area]. It’ll be the new center of campus.”

Aside from the glass exterior, the building will have several large-capacity flexible classrooms, numerous regular flexible classrooms, a major makers space, provisions for RIT’s project teams and other facilities that Yarrington says will strengthen RIT’s performing arts program—such as an experimental theater, dance facilities and rehearsal spaces.

“We’ve found that our STEAM [Science, Technology, Engineering, the Arts and Mathematics] and STEM students are also good musicians and good creators,” he says.

Trevor Harrison has worked with Yarrington since he started his firm, HBT Architects, almost 20 years ago. He says there’s a certain synergy that is attributed to the many projects his company has completed at RIT, and the new Maker project is the most exciting one yet. 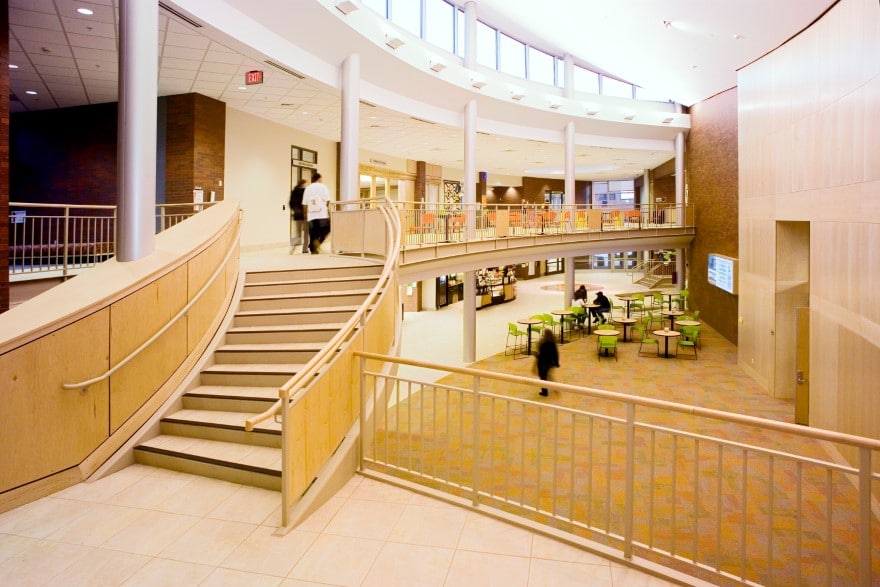 Harrison and Yarrington speak weekly about the project, and there’s been some talk about changing the design because of social distancing guidelines and other protocols.

“There are many things to consider in a building of this scale, but looking at ways to limit touch points, like at doorways and toilet rooms, has been one topic of conversation,” Harrison says.
“These decisions can affect the project’s budget, so we’re looking at ways to make the most positive impact, to keep the users safe and to fund the design decision within the overall project budget.” 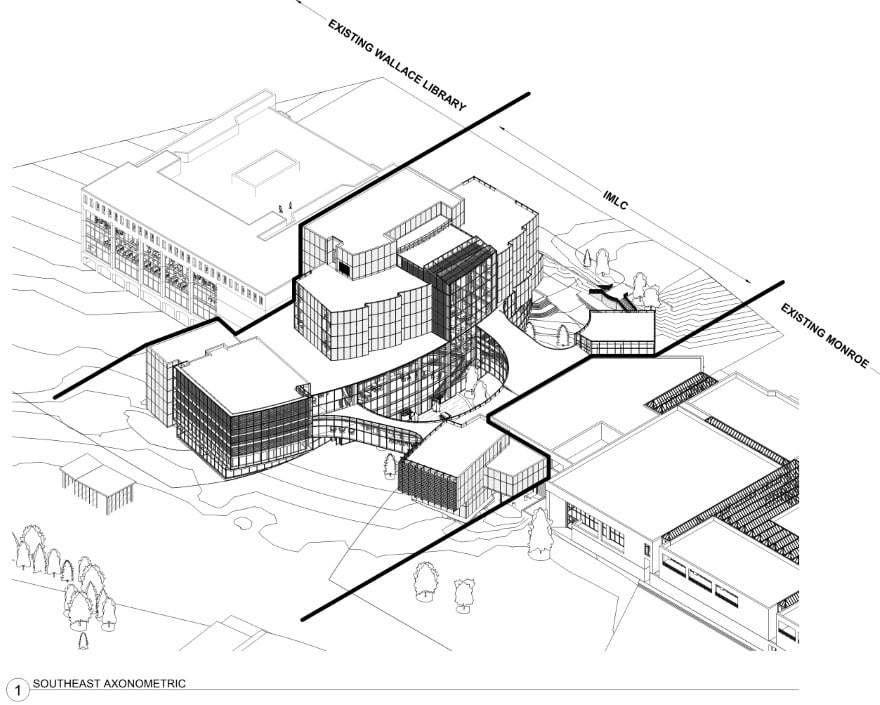 Balancing the goals of social distancing, which requires more room, while not losing the overall feel and vision for the Maker space is something Harrison and Yarrington talk about regularly.

“Luckily, this building will offer incredible flexibility for the users,” Harrison says.

A key goal for the entire design team is to provide RIT with a building that can adapt to changes in pedagogy, student needs and social interactions over time.

Attracting a new generation of students

Yarrington—who attended Eisenhower College which merged with RIT in 1982, and the Harvard Graduate School of Design—says the school is distinctive, because while it has strong STEM academic programs, it’s also strong in design and the arts. There’s the School for American Crafts and a Master of Architecture program, and there’s also one of the country’s major schools for deaf education, the National Technical Institute for the Deaf. 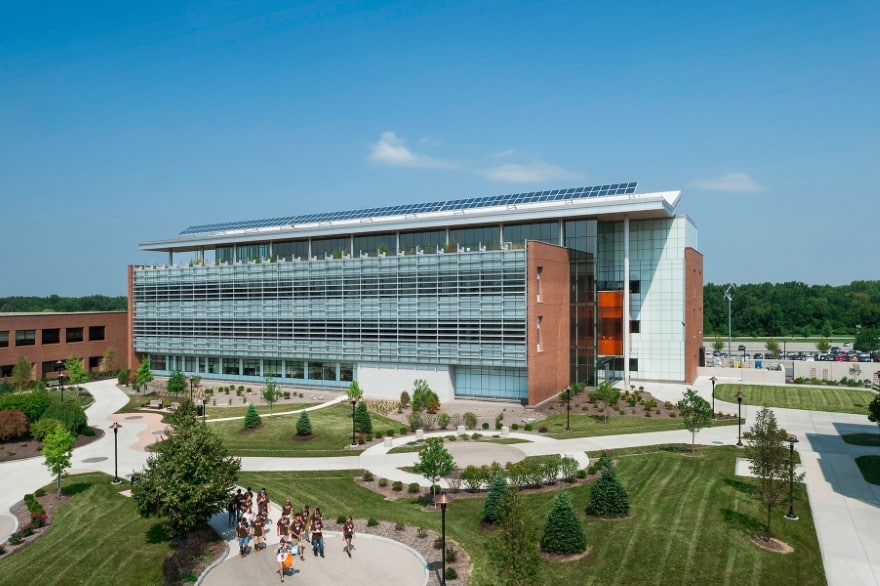 Attracting multi-faceted students who might major in cybersecurity and minor in music or acting is a goal for RIT, Yarrington says. After all, technology is in the school’s name, so it’s obviously important, but he also sees it is as a bridge to connecting everything else.

Other initiatives moving RIT into future

The new Innovative Maker and Learning Complex has been a component of the school’s first master plan—in conjunction with landscape architecture firm Hargreaves Jones—since 2002. But it’s not the only thing in the RIT construction hopper. 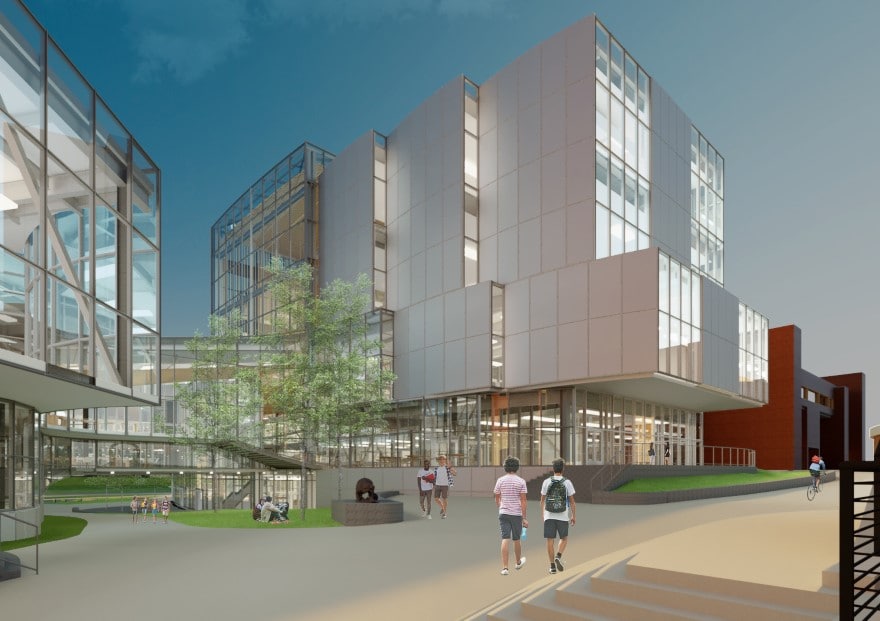 Plans call for a new performing arts facility on the northwest side of campus—working with the design team of Michael Maltzan Architecture based in Los Angeles and the SWBR firm out of Rochester—along with an expansion of the business school, designed by LaBella Associates in Rochester. Yarrington’s team is also working with athletics facility design firm Populous to begin an athletics master plan starting with the stadium.

“I think President Munson sees the opportunity to strengthen the connection and collision between all these things that, at a glance, look pretty different,” Yarrington says.

The new $25 million cybersecurity space—designed by LaBella—includes a large simulation room modeled on IBM’s major simulation rooms, such as the one Yarrington and others saw when they visited the company’s Security Command Center in Cambridge, Massachusetts.

There, the group watched a dynamic scenario play out as a fictional company’s cybersecurity was breached. The demo showed how the company’s stock was tanking in real-time, and there were public relations people and government officials talking about the cyber emergency. It is a real-life simulation and the kind of interactive environment that will provide a uniquely realistic learning opportunity for students in the growing cybersecurity degree program, Yarrington says.

While remote learning will be a bigger part of higher education as a result of the COVID-19 pandemic, Yarrington admits most students and faculty may feel like the online experience and dynamic isn’t the same.

He says school higher-ups are planning for different scenarios and financial situations that RIT—and other institutions of higher learning—may face coming out of the health crisis. For instance, how many students will come back, can classes resume as before the coronavirus, and how does the maintenance staff service the building?

“It makes you think about operations and utilization. Would we repurpose larger spaces for teaching that aren’t usually used for teaching, like an auditorium, for social distancing?” he says. 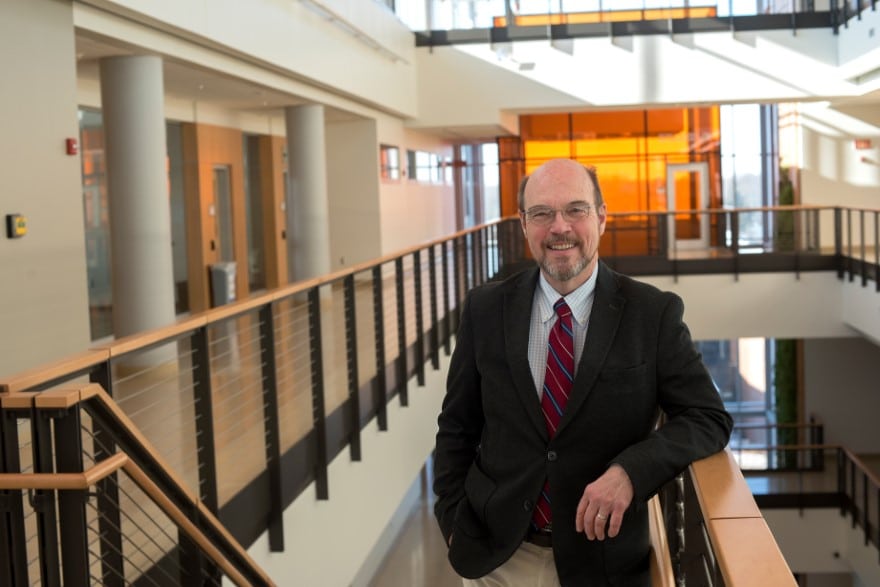 Once the school makes the decision on how to move forward, the next step is communicating that plan to the faculty, staff and student population—no small task. Yarrington says meetings are taking place with numerous university teams including academic affairs, auxiliary services, and marketing and communications about the best way to execute the plan for RIT.

“How we use our facilities will probably change, and there will probably be some impact to our density. It’ll impact housing and dining, and we’ll come up with different delivery systems for services,” Yarrington explains.

Still, no matter the challenges and changes or the situations or scenarios, Yarrington says the school, its administration, faculty, staff and students are well-positioned to adapt and make the most out of the hand that is dealt.

“It’s really like a war, and it’s a changing situation that we’re dealing with,” he says. “An unplanned event like COVID-19 reveals the depth of talent that an institution like RIT can bring to bear to develop effective solutions.” 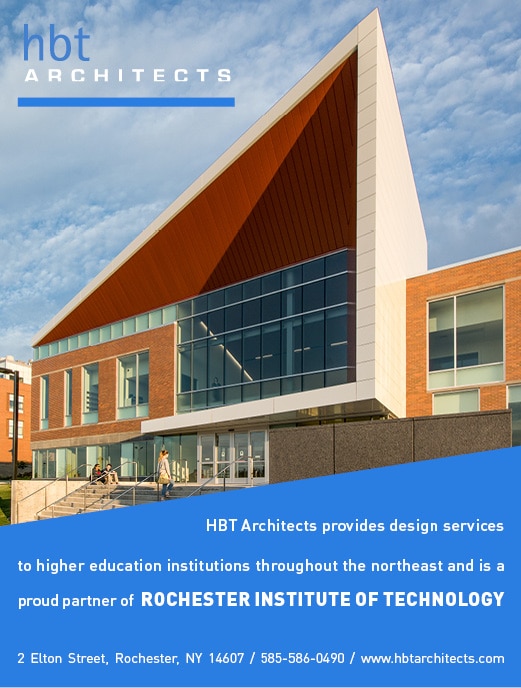 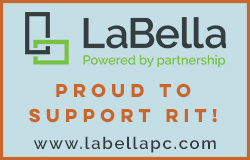 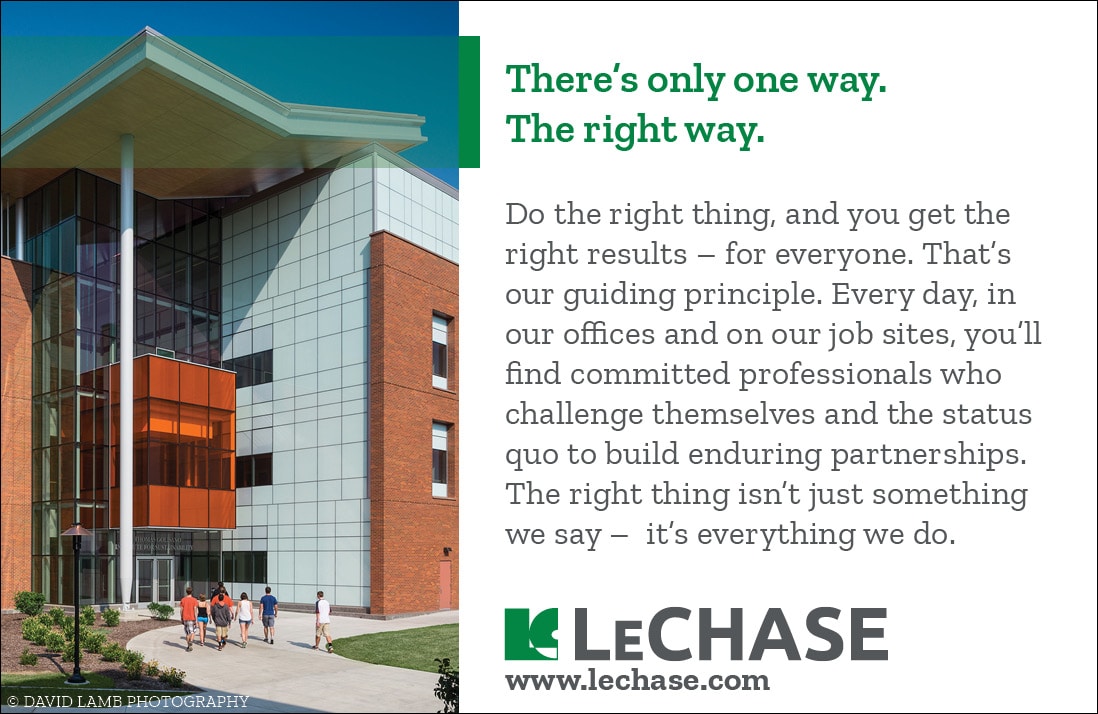 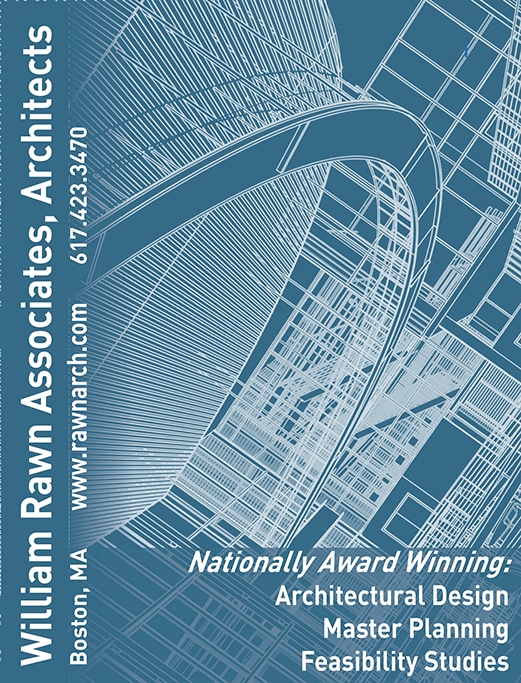