Walking into the world of fine dining at Fleming’s Prime Steakhouse & Wine Bar—located on Brickell Avenue in Miami—is to step into a subtle, sophisticated environment.

The savory aroma of a prime dry-aged beef fills the air. Guests are seated at tables dressed in crisp linens. The backdrop is painted with contrasting colored walls from deep purples to creamy whites. High ceilings, tall windows, flickering candlelight and private dining areas are punctuated with original artwork in a setting that is the epitome of elegance. 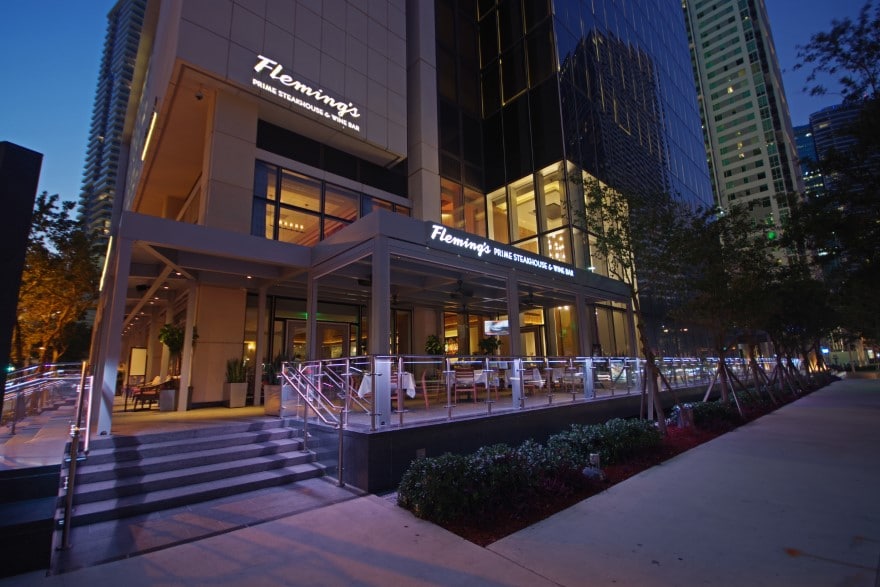 One would never expect that the raw storm surge of Hurricane Irma once washed up the stairs.

Luckily, she says, the storm happened before the company began the millwork installation. Describing the project as one of her favorites—yet one of her most challenging to date—Striepling says the team thrived on transforming the challenging space by implementing a curated design to fit into the cultural fabric and energy of Brickell Avenue.

“My favorite aspect of the work is the collaboration—and I surround myself with strong players,” she says. “You never know what life brings you day-to-day and hour-by-hour. It could be floods, hurricanes, fires—and even cars driving into the walls of restaurants—which has happened. It’s up to the team to work together to get the restaurant back open for guests and our operations team—something we can do efficiently with the team we have.”

It’s hard to continue a major post-hurricane construction build-out, however, when you have to keep pumping quarters into the parking meter.

But that’s one of the costs of construction in downtown Miami.

The Fleming’s project, completed in 2018, presented many design and logistical challenges. Located at the bottom of a high-rise building—with three sides almost entirely of glass—the site featured awkward 40-foot ceilings inside. In addition, the site was subject to plenty of restrictions from the landlord and city officials. Located on a busy downtown thoroughfare, the location made project staging impossible, requiring pieces to be constructed off-site and then installed—all while keeping those parking meters fed.

When it finally it came together, however, the result was nothing short of magnificent. 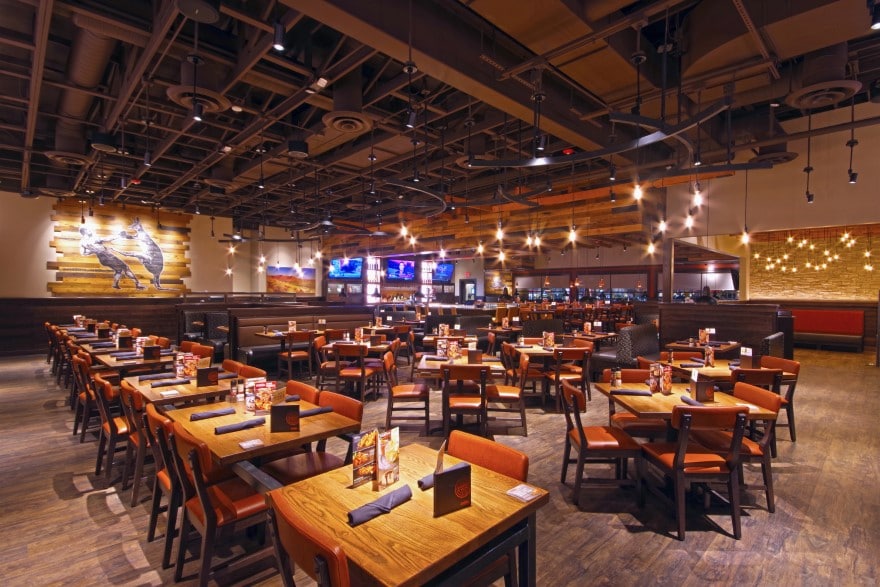 A team of engineers, designers, architects and the general contractor collaborated to make the project a showstopper. Encompassing 7,722 square feet, the restaurant seats 220 inside and 54 on the patio.

The glassed-in kitchen became part of the overall experience, allowing guests to see chefs sauté, while hearing the sizzle from the broiler. In addition, a newly-constructed mezzanine level allows patrons on the second floor to look down at the bartenders shaking cocktails—and the space can also be closed off for private dining. More impressive still, the mezzanine gives diners a bird’s eye view to watch Miami’s sparkling nightlife

A focal point that Striepling’s team is particularly proud of, however, is an upside-down glass tree hanging from the ceiling. Inspired by a trip to a theme park, she sourced a designer in California who helped bring her vision to life.

Two Miami artists—Alex Mijares and Mari-Carmen Fernandez—also contributed to the interior look, adding their work to the scene.

“This project was unique; no cookie-cutter designs here,” she says.

Getting by with a little help from her friends

Striepling says she’s worked with GPD Group, a national architecture and engineering firm, for four years on each of the company’s brands and recently asked them to visit a project in Ohio with all key internal and external members of the team.

“I tell them to be honest with us and tell us when something’s not going to work and to show us a better way,” she says. 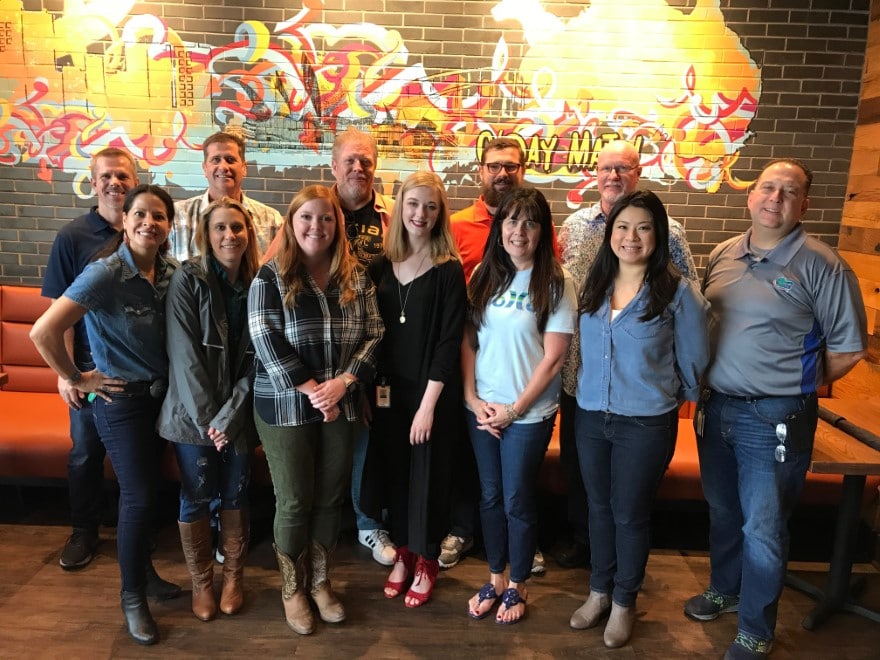 Bob White, project coordinator, of GPD says he enjoys working with Striepling and loves the fact she’s a straight shooter. He says initially the firm came on board to work with Bloomin’ Brands on an exterior remodeling program, which led to interior remodeling work. His firm is currently assisting with architecture and engineering design for two new Bonefish and Carrabba’s restaurants in Florida which will become the brand standards for each concept.

In 2018 he says the two companies collaborated to develop an Outback Steakhouse prototype building that is an adaptable model across the country—with the first one currently under construction.

Jason Walder, the owner of Atlanta-based Wathco Construction, says he’s also had a long and productive working relationship with Bloomin’ Brands and has known Striepling for 23 years—back when she worked for Darden in Orlando. Starting two years ago, he assisted Bloomin’ Brands with work on more than 100 Outback Steakhouse remodels, as well as Fleming’s, Bonefish Grill and Carrabba’s properties. Licensed in all 50 states, there’s no shortage of work for this family of national brands.

“We’re well-versed on multiple concepts of their work, implementing whatever is needed, and our design rollouts have been quite successful—we’ve even helped them do specialty projects and cleanup work in Panama City after the hurricane, to get them re-opened,” he says. “I have certainly enjoyed our partnership.”

A career highlight, the Fleming’s project is by no means the only one on Striepling’s plate.

A focus this year has been overseeing the relocation of numerous Outback Steakhouses. Domestically there are 580 company-owned restaurants and 147 franchise locations, in addition to 254 locations in 19 countries. 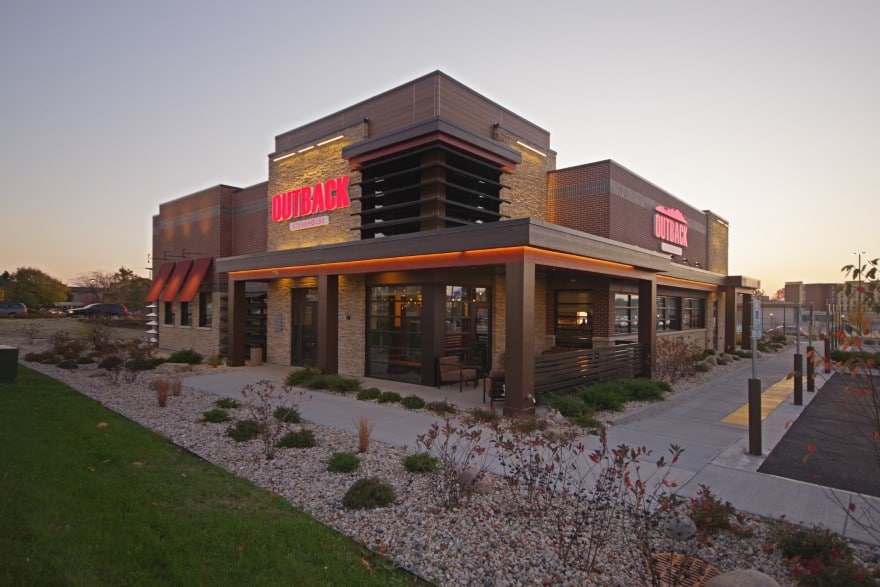 According to Striepling, real estate teams within the company review sites and develop strategies, often suggesting moving a location based on changes in demographics, traffic patterns and trade areas. The projects also allow the team to update designs and consider additional business platforms such as lunch, catering or delivery.

“There’s no question we’ve see an increase in sales by relocating a restaurant just a few miles away,” she says.

If there’s one thing Striepling knows well, it’s understanding the logistics and patterns of operations in the construction business. Growing up in Chicago, she spent a lot of time on jobsites since her family owns an HVAC contracting firm.

“I think those very early experiences made me stronger as a designer,” she says. “I’m by no means an expert, but I know what questions to ask and who to partner with. Some people may have grandiose schemes, but often don’t know what a project requires.”

Over the next 15 years, Striepling performed several roles in interior design, project management and construction for companies including Darden Restaurants; JPS Design & Project Management; and Kohl’s Department Stores—posts that took her from Orlando to Milwaukee.

Joining Bloomin’ Brands in 2012 as a manger of design innovations, she quickly progressed, garnering five promotions in less than seven years. In her current role, she directs a team of 23 people and manages multimillion dollar projects.

Inspiration for the projects, she says, is collaborative, stemming from regular brainstorming sessions with her team—a group she describes as an eclectic cadre of music lovers, soccer dads and foodies. For Striepling, the resulting diversity of perspective and opinion has been a big factor in her department’s success.

“One thing everyone holds in common is a desire to stay on the same page and stay true to the DNA of each restaurant brand,” Striepling says. 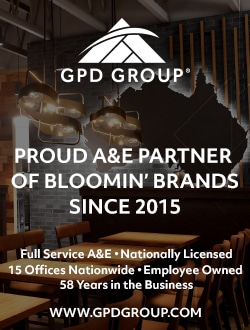 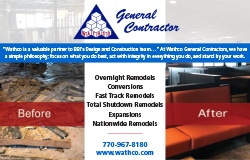 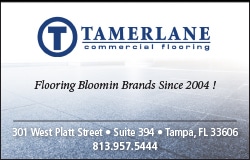