Time to branch out?

Jeff Kagey’s path through the past, present and future of banking has been unorthodox. He began as a teller more than 30 years ago, but found his niche not behind a counter, but by helping design them—and the rest of a bank, too.

Now the vice president of corporate real estate and facilities for LegacyTexas, Kagey has helped the bank build out its operations for 12 years, helping it grow to more than 40 branches in North Texas. 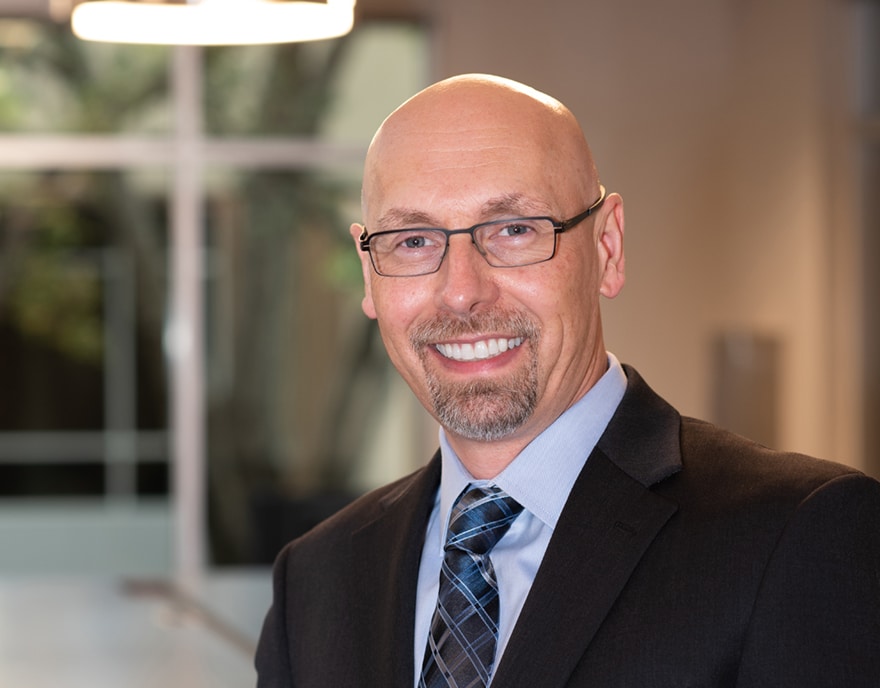 Still, he sees a future where branch banking becomes smaller.

“The days of 5,000-square-foot branches with vaults and six drive-up lanes are gone,” Kagey says.

In the last few years, Kagey has supervised a 10,000-square-foot expansion of training space for LegacyTexas employees in Richardson, Texas, and a relocation of its lending operations in Fort Worth.

Both projects upgraded offices and training spaces. In the case of the lending office, the overhaul provided a better location to serve LegacyTexas customers, with the new office shifted to the Sundance Square mixed-use district in Fort Worth.

“It’s important for us for our new employees to get a ‘wow’ factor,” Kagey added about the new training area, built into space already owned by the bank.

According to Kagey, employees will learn in a training center designed for the requirements of 21st century banking, based on input from LegacyTexas’ training team. 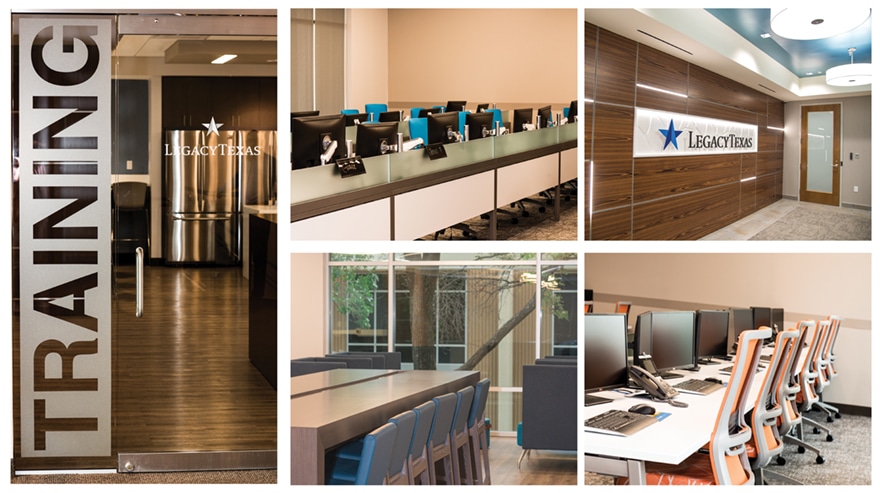 There are four rooms built for training, Kagey says, with one set up as a mock teller line, allowing role-playing and other exercises to better prepare bankers for that first day in front of real clients.

Kagey adds that the center has a strong AV component, as well as rooms with single and double monitors for when specific systems trainings are set up. The bank training staff has dedicated workspace that includes three private offices and eight cubicle workstations to round out the space.

By contrast, the needs for the loan center were more about privacy than shared spaces, Kagey notes, and it was also a chance to start from scratch at the new site in Sundance Square.

“The credit analysts and lenders need their own spaces,” Kagey explains. “The way they work is individually or one-on-one with other employees, so they really did not need a space that creates ambient noise.”

At the same time, the credit analysts and lenders need to be connected, specifically with corporate offices in Dallas and Plano, so Kagey says a significant amount of the building budget was devoted to providing AV conferencing, eliminating the need to travel for meetings. 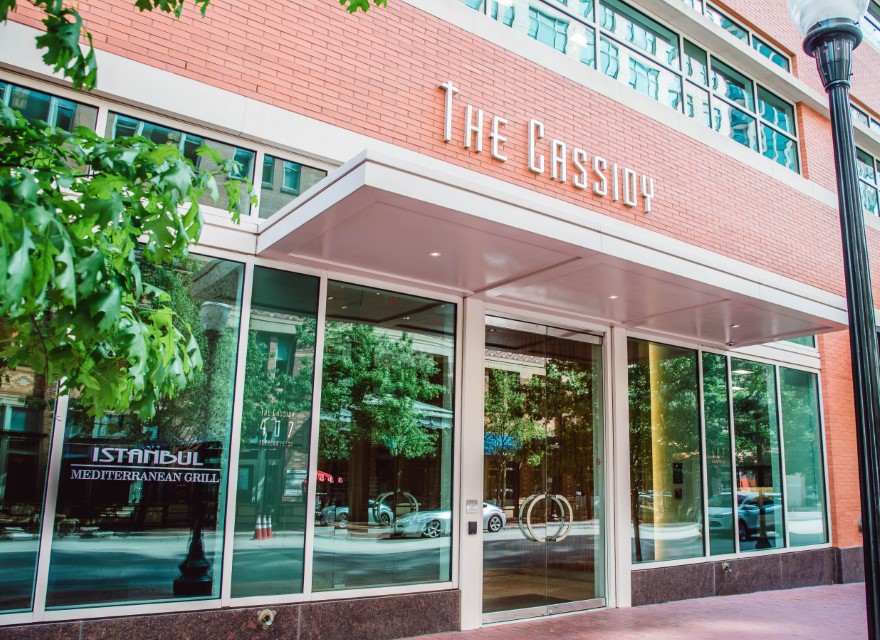 Real estate may be plentiful in Texas, but Kagey says bank locations need to be where development already exists.

“Banks in general do not generate traffic,” he says. “We want to be near the retailers and restaurants that do.”

Building a new branch as a stand-alone or within a shopping center depends on the local market, but if the bank is part of a shopping center, the endcap space is preferred for drive-up service, Kagey says. The difference now is banks are not the only businesses wanting that space.

“We fight over the same spaces, endcaps with Starbucks or Dunkin’ Donuts, anyone who wants the drive-up window,” Kagey says.

At the same time, Kagey adds the desire to have a drive-up lane is no longer the deal breaker in site selection that it used to be. The service is a convenience for clients, but it is no longer a requirement in every market a bank serves. 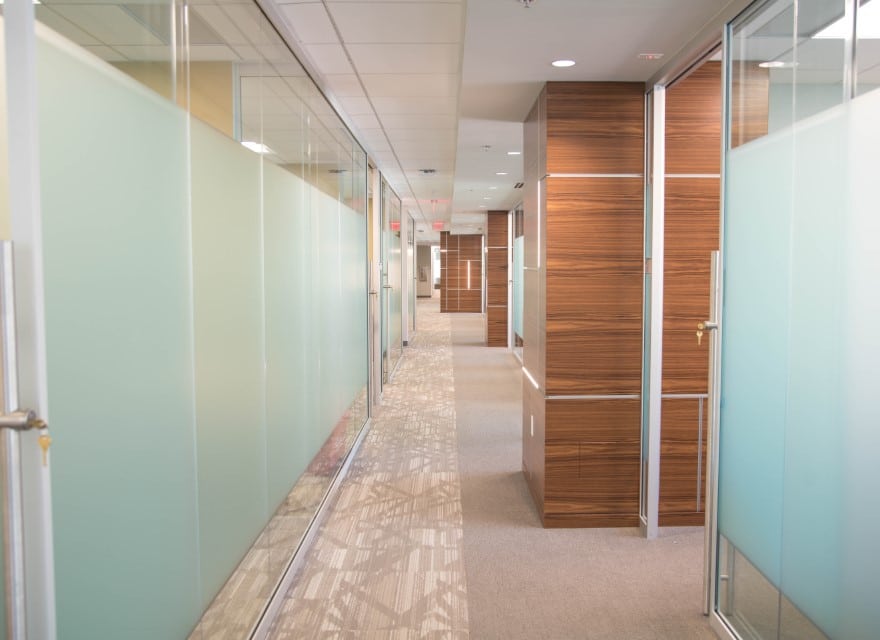 The layout inside branches layout continues to evolve, too, as the large teller windows are disappearing because transactions once done at them can now be done by phone. So while there is less of need for floor space dedicated to transactions, there is a greater need for space for advisory and consultative services, Kagey says.

Kagey says LegacyTexas has also been less interested in building from the ground up because of construction costs and because it can take a year from getting planning approval to opening a new branch.

The good news is the pace of development in and around Dallas is creating a favorable environment for expansion.

“They build so fast down here, roads go in and there’s all sorts of development,” Kagey says.

LegacyTexas is the product of about six mergers and acquisitions over the years, and a seventh sale is underway as Houston-based Prosperity Bank looks to complete its purchase of LegacyTexas by the second quarter of 2020.

The sale is not Kagey’s first rodeo, but it will be his last ride with LegacyTexas as he will leave in June 2020. Don’t expect Kagey to ride off into the sunset, though.

“I’ve worked in banking since 1986,” he says. “I chose to stay in the industry because it ebbs and flows, and I’ve been on both sides of getting bought or sold.” 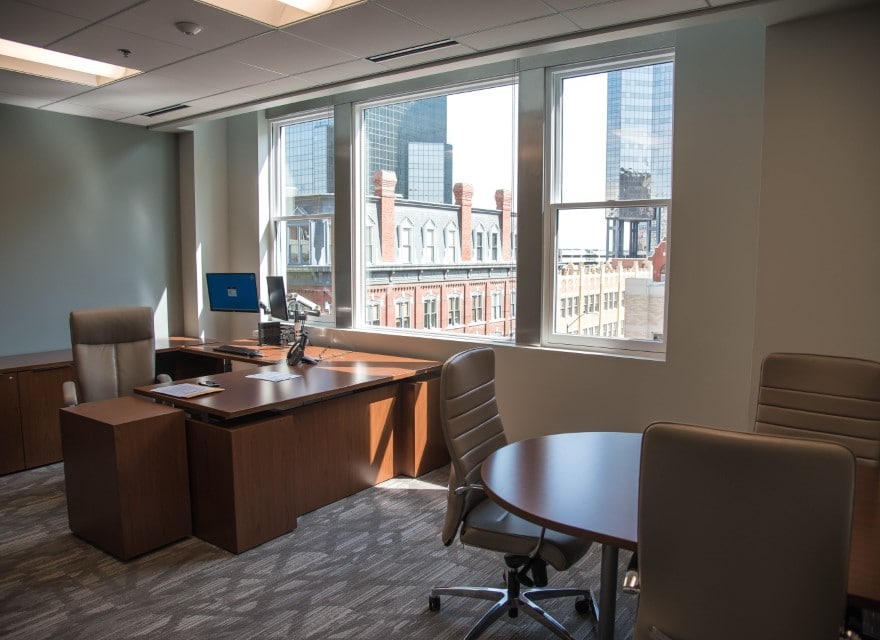 With so much experience and so much change under his belt, Kagey’s clear where he’d like to land.

“I do like to be more part of the concept and innovative side of the construction management process,” he says. “I’d like to be answering the question of ‘how do we make things more efficient and deliver an awesome employee and client experience?’”

A native of Seattle who moved to Texas for personal reasons, Kagey says his future may take him anywhere.

“I feel a bit like a free agent at this point of my career and I have just starting thinking about where my next adventure may take me. It’s a nervous and exciting at the same time,” he says.

He began his banking career as a teller, working his way through roles with Pioneer Bank in Lynnwood, Washington; Anchor Savings Bank in Aberdeen, Washington; InterWest Bank in Oak Harbor, Washington; and AmericanWest Bank in Spokane, before arriving in Texas in 2007. At ViewPoint Bank, he was a vice president in charge of facilities, and his role expanded when LegacyTexas and ViewPoint merged in 2015.

Outside work, Kagey, 52, is an avid hiker and says he is setting a goal to see as many national parks as possible.

“I could be Eddie Bauer’s poster child,” he jokes. 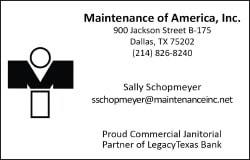