Groundwork in place for sustained growth

There’s something about the soil in Wisconsin that can be most unsettling—literally—to a house’s foundation. Most of the state is covered by the Ice Age’s glacial deposits and expansive clays much affected by the extreme seasons of the Upper Midwest. During dry spells—and this region has known drought—the soil shrinks, which can cause what’s been built atop to settle unevenly and oftentimes crack. But with climate change, summer temperatures could be rising and that might mean increased rainfall and the accompanying leakage. Typically harsh winters followed by dramatic spring thaws will only cause further distress to a house’s foundation and, unless tended to, the damage will likely compound.

All of which has contributed to Sure-Dry Basement Systems becoming Wisconsin’s largest foundation repair contractor and, in the words of General Manager Jamie Budiac, redefining the waterproofing industry. Access to over 30 patented products and a growing staff with a one-team mentality will do just that, he assures Blueprint this past October as temperatures plunge and the phone rings with service requests from residential homeowners who comprise 90 percent of the clientele.

“Everything’s connected at Sure-Dry,” Budiac says from his Menasha office. “It starts at the top where we invest in our employees’ growth. That puts the team on the right path to performing excellent work for our customer base.”

Its online marketing augmented by a new referral system that incentivizes customers to tout Sure-Dry’s reliability, Budiac is upbeat that despite a temporary reduction in the workforce necessitated last March by COVID-19, projections are on track for a productive 2021. A goal of a 20 percent increase in revenue and 100 hired hands seem within reach, he says.

Though the pandemic initially staggered all facets of the construction industry, Budiac says that the longer it’s gone on, the more calls have been coming in, what with so many Wisconsin residents working at home and noticing the need for upgrades. Maybe it’s a crack in a wall, recurring puddles on the basement floor, sinking or uneven concrete slabs or a damp and musty crawlspace.

Got to get to the root of the matter, which could be anything from settlement to hydrostatic pressure to soil erosion. Whatever the problem, he says Sure-Dry has solutions to spare—it being part of a dealer network that includes Nebraska-based Supportworks and Connecticut Basement Systems. Each of those companies supports Sure-Dry’s four specialties of water control solutions, concrete repair, foundation stabilization due to inadequate earth support, and repair of cracked or bowed walls.

But while other companies might have similar product lines, Budiac says it’s his crew that really differentiates Sure-Dry. For starters, every new hire goes through the same orientation for two weeks. Doesn’t matter if it’s a secretary, sales rep or someone who will get their hands dirty—everyone’s a member of the Sure-Dry team.

“We’ll hire a diverse group of blue- and white-collar people and emphasize our culture and mindset early,” he explains. “After those two weeks, they break off in roles specific to their training.”

Then there’s the 90-day check-in on their progress, and after that, it’s twice a year. Anticipating a post-COVID–19 return to normal business in 2021, Budiac expects to resume quarterly town meetings as well as bonding activities that have included a bus trip to Lambeau Field and a scavenger hunt at the Green Bay Packers Hall of Fame.

His own foundation solid

Budiac brought much of that substance to the company in 2009 after garnering over 11 years of experience in real estate and residential construction, which slumped even before the Great Recession.

Repair and maintenance seeming to offer more stability, he answered a Sure-Dry ad for a project manager and for five years ran a sister company for foundational contracting. The companies merged in 2014 with Budiac’s letterhead changing to director of field operations. In 2016 he became general manager.

For a few years the company wasn’t transitioning. Instead, its revenues plateaued from 2014 to 2017, management scratching their heads for a way to reinvigorate the operation. “A finite game with a finite mindset,” Budiac recalls.

Recognizing a problem being the first step to solving it, Budiac and President Doug Newhouse redefined the customer-contractor experience by creating and meeting higher standards for service and better in-house interaction, with positive results on both fronts. That’s where the “1 Team” approach arose, with its new training and communication protocols as well as a pitch for more civic involvement.

What had been a $3 million company as recently as a few years ago has over quadrupled in size. There’s a satellite office in Wausau to strengthen the Sure-Dry stronghold of Northeast and Central Wisconsin. The company also services the homeowners of Michigan’s Upper Peninsula.

When Budiac spoke with Blueprint, Sure-Dry was on track to meet its 2020 revenue goal, a 40 percent increase over 2019, with a workforce of now almost 90 – many of them employee referrals. 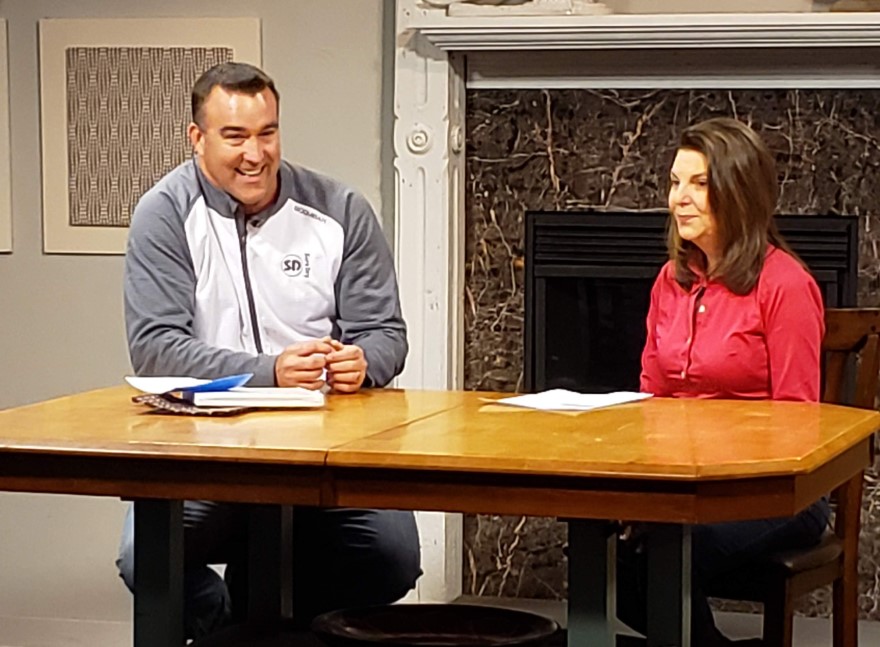 Newhouse was also cited as 2020 Inspiring Business Person of the Year by the Heart of the Valley Chamber of Commerce.

“By developing a business model that prioritizes people over results, the results have been historically high, and that is directly reflective of the mindset and culture 1 Team has created at Sure-Dry,” Budiac says.