Where townhouses and history go with the flow

Brackish waters, tidal creeks and marshy banks are staples to coastal Charleston, South Carolina. Without the famous waterways that flow along its banks, this historic city would not have risen and flourished to the charming destination it is today. The Ashley River is one of many waterways that have contributed to Charleston’s continuous growth, and in its waters flow abundant history. And that history is being celebrated through a new housing development that is taking shape near the river’s banks.

“The greater Charleston area is such a special place, and as a local builder, we have a special respect for the history that flows through our very own Ashley River and its tributaries,” says Will Herring, the congenial founder of Hunter Quinn Homes in nearby Mount Pleasant. “Among these historic streams, we have decided to create a community that embodies the best qualities of our waterways in both name and purpose.” 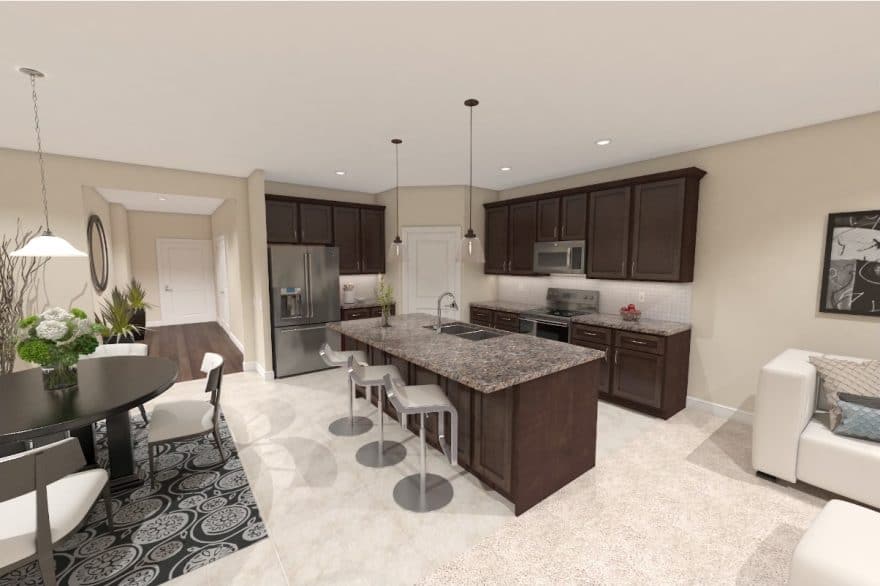 Hunter Quinn Homes has only been in existence since 2013, but has already made an impressive mark on what’s known as South Carolina’s low country, with a growth rate in excess of 500 percent. As the late summer was turning toward autumn, it was nearing time to “go vertical” with the company’s latest ambitious development.

It’s called Tributary at The Park at Rivers Edge, and could be just the kind of housing project the greater Charleston area needs to sustain its explosive economic growth of recent years: 94 energy-efficient townhomes priced in the high $100,000s and low $200,000s. With the recent influx of people moving to the region, the price is just right for prospective first-time homebuyers.

First-time, move-up buyers and downsizers are also among the people likely to be looking at the units that should become owner-ready late this year or early 2018.

A river runs through it

Rivers, of course, need sources, and the marsh and the sea by themselves couldn’t sustain the meandering, oxbowed Ashley that once moved plantation pickings to port. Various tributaries flow into the Ashley, and Hunter Quinn is intent on them being recognized in the four floor plans that will come to this new community, all of which include three bedrooms and two-and-half baths: Sawpit Creek, Olive Branch, Church Creek and Coosaw Creek.

“We want to create a cohesive experience for potential buyers that encompasses all the beauty and interesting elements that exist within and around Tributary,” says the firm’s marketing manager, Krista Mott. “Charleston has such a diverse and rich history. We find it imperative to pay homage and share the history with our potential neighbors. By naming each floor plan after actual tributaries that flow through their backyard, what better way to connect history with their new homes?”

The Olive Branch plan places its bedrooms upstairs, and is roomier at 1,660 square feet. Its open kitchen flows into a family room, and Herring says that with this kind of functional layout, not a square inch goes to waste. 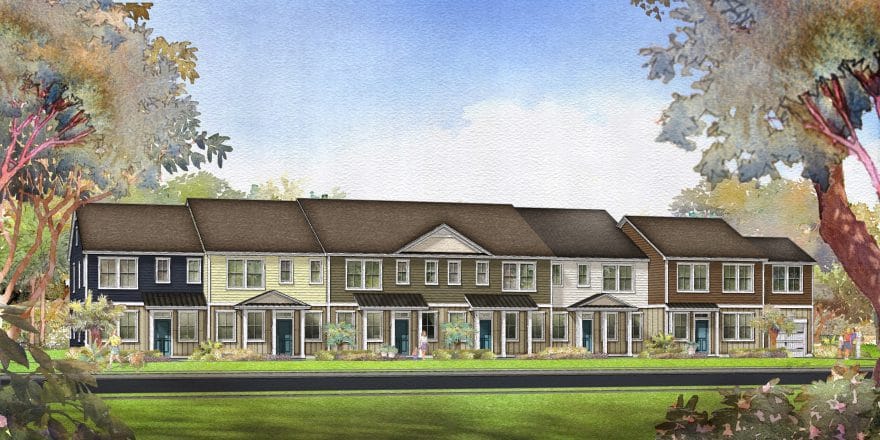 As it is geographically, Church Creek is the third stop on the Ashley River Tributary tour, offering the same number of bedrooms and baths, but its 1,880 square feet means more living space downstairs and a storage area on the second level. An additional loft makes more closet space possible.

“Each of these new homes, as are all of the homes we build, will be built to maximize energy conservation and in turn be much more energy-efficient than some older, neighboring homes.” explains Todd Nowicki, operations manager of Hunter Quinn. “Every home we deliver is HERS rated for energy efficiency and third-party tested to ensure we are maximizing the opportunity to provide homes that lower energy costs and provide additional pocket money for our home owners.”

Part of a greater community

For some residents, there’ll be little reason on most days to stray from home. Tributary’s location isn’t just sunny and scenic; it’s practical as well, being within easy distance of what likely will be where many of its occupants will be working. Such major employers as Boeing, Bosch, Charleston Air Force Base and Trident Tech are within easy commuting distance, and the townhouses are surrounded by numerous shopping, dining and entertainment options.

A homeowners association will spare residents the chores of lawn mowing and yard maintenance, allowing more time at the Olympic-size pool on those sultry days that can make up most of the South Carolina calendar year. Other amenities will include tennis courts, a clubhouse, a children’s play park, walking paths and even optional boat storage. Golfers will have no shortage of links options within a short drive.

Hunter Quinn was building homes in The Park at Rivers Edge community back in 2014, when Herring learned of an abutting 50-acre tract in the rear of the established community that had been foreclosed during the Great Recession.

Herring had been in Charleston, as well as the building industry, throughout his early professional life and recognized opportunity where others had fallen short. Hunter Quinn acquired the land and broke ground for Tributary early this year, and like virtually all of the company’s projects, this one is progressing satisfactorily. 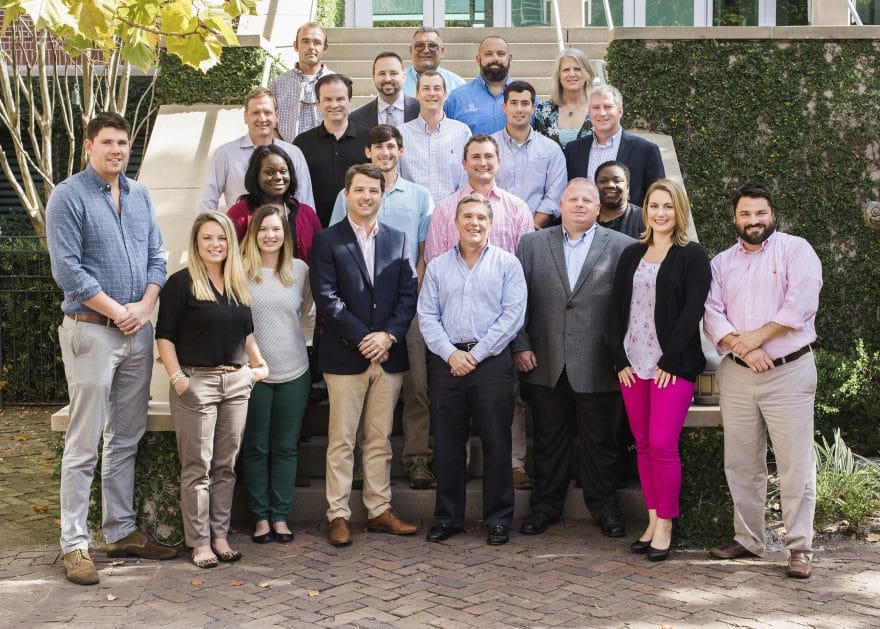 And the Charleston area could use more such developments. Once sustained largely by tourism, South Carolina’s low country coastal area has become a cosmopolitan community whose antebellum charm, diverse economy and friendly people put it at or near the top of all those lists of best places to reside.

Acquiring a residence is becoming more and more of a challenge in one of the nation’s hottest seller’s markets. Forty to 50 people arrive daily with the intent of putting down roots, and are well-advised not to hesitate on the housing front. The local realtors’ board says the median house sold for $260,000 in July, up $10,000 from the previous 12 months.

As any economist will attest, high housing costs can cool any community’s growth, especially when middle-class workers find the area unaffordable. Hunter Quinn’s niche of tastefully detached and attached homes in the Tributary and elsewhere may be just what the newcomers are looking for. Herring wants to keep meeting that demand.

“The Charleston area is a fantastic place to live and people are moving here daily, but finding the housing very expensive,” he says. “Our product is positioned to allow us to meet the affordability of our buyers.” 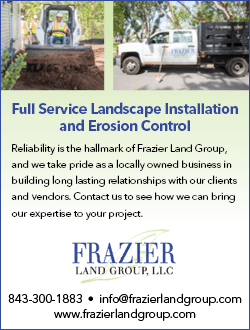 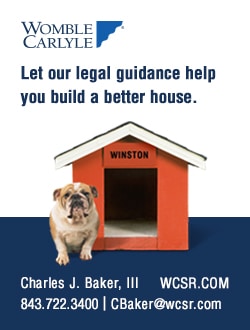 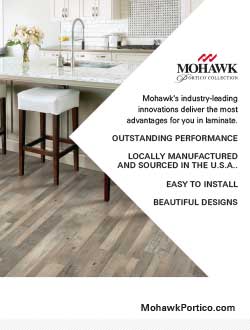