There’s more than a smattering of early 1970s idealism that’s sustained in Pennsylvania’s capital city of Harrisburg, and it’s a mindset that can cut across all political, ethnic and demographic lines.

After all, most any constituency would favor an already desirable downtown becoming an even more livable and exciting place.

And that has been the mission of the nonprofit economic development firm, Harristown Development Corp., since its 1974 founding by a group of local and community leaders. They saw unrealized potential in what had been an underachieving, rundown city that had been ravaged by flooding when the Susquehanna River overflowed its banks a few years earlier. 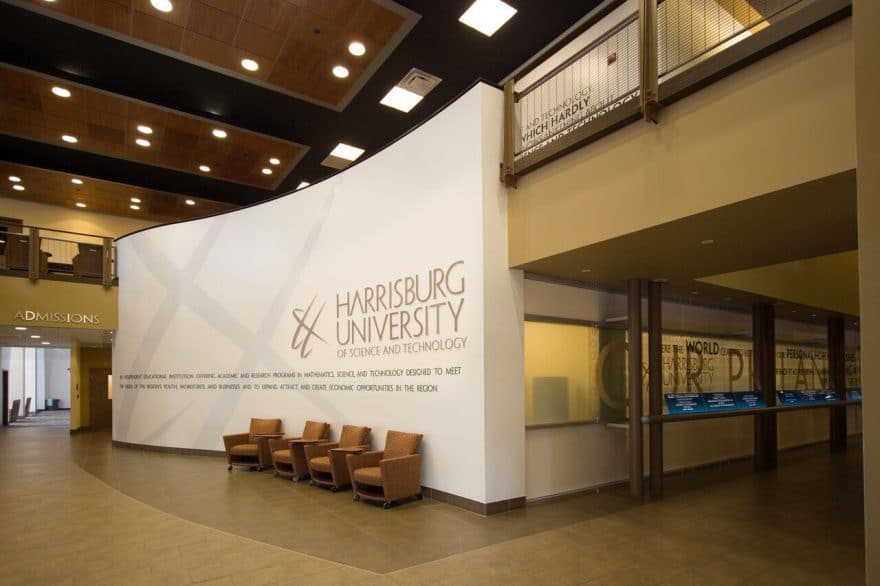 Anyone who had been away from Harrisburg since then might not recognize it today. Over the decades, the torch of progress has been passed to succeeding generations in charge of Harristown, and once-incremental growth has snowballed, with the firm having managed over $500 million of downtown development and redevelopment, including the landmark Strawberry Square.

A monument to modern urban revitalization since its 1978 opening, the two-story, 1.4 million-square-foot mixed-use facility overlooks the Capitol building and has evolved to be Harrisburg’s de facto town square.

During a wide-ranging September interview with Blueprint, Bradley Jones, a longtime Harristown executive who became its fourth president and chief executive officer in 2015, summed up the firm’s mission in rhyme: Eds, beds and meds—the three basics of community being schools, residential living and healthcare. You’ll find all three, and much more, at Strawberry Square as well as in other parts of downtown Harrisburg.

“We have always had a fantastic daytime workforce component with state offices here in Harrisburg, but more recently our focus has been on eds, beds and meds,” he says, explaining that this vision will help promote economic development and growth.

New downtown apartments, the support of existing and planned educational facilities, as well as medical-related businesses are all part of the growing strategy for increasing the viability of Strawberry Square and the rest of the downtown.

It’s suggested to Jones that he could add a fourth rhyme: Peds as in pedestrians, since Harristown’s projects have contributed to a most walkable downtown Harrisburg; one in which most everything people would want or need is within a block or two. 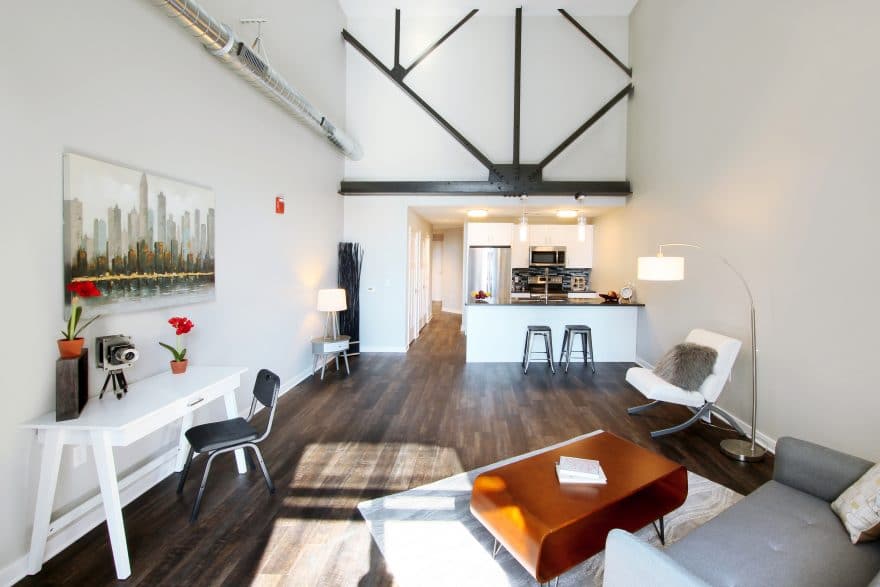 Getting back to the beds, Jones explains that Strawberry Square now offers 24 luxury apartments with 15-foot ceilings; open floor plans with large, sunlight-friendly windows; top-of-the-line stainless steel appliances, including washer and dryer; tiled bathrooms with glass-enclosed showers; covered parking and 24-hour security. And that’s just at Strawberry Square; Harristown has brought dozens more modest units online during the past couple of years at other downtown locales, and hopes to surpass 100 units over the next few years.

The “eds” aspect includes supporting the growth and development of a variety of educational institutions that are connected to downtown and Strawberry Square.

Temple University Harrisburg provides graduate students with a local campus, meaning they don’t have to travel to the main campus in Philadelphia. Ample courses, certification programs and professional development opportunities are available right at the square, as well as a new undergraduate program for freshman students in Harrisburg.

One of Pennsylvania’s newest and most affordable private schools, the Harrisburg University of Science and Technology, with over 4,000 students, fulfills a need for STEM courses at its 16-story Academic Center, also connected right to the square.

More inclusive than that

That’s not to say that all Strawberry Square uses can be reduced to rhyme. There are other restaurants, a food court, food/grocery related retail outlets, professional offices, and commercial space that includes Market on Market and Provisions grocery stores—a private answer to the Trader Joe’s grocery chain. There is also a bevy of entertainment and cultural facilities and higher-end restaurants all around the square and the downtown.

“With Strawberry Square, there’s no reason to go outside if you don’t want to,” the excitable Jones says. “It’s like a city within a city.”

Of course, there’s reason aplenty for one to step outside Strawberry Square and enjoy the rest of the downtown, as well as the natural attractions outside city limits, and should anyone have need to go elsewhere, Harristown provides for them as well. 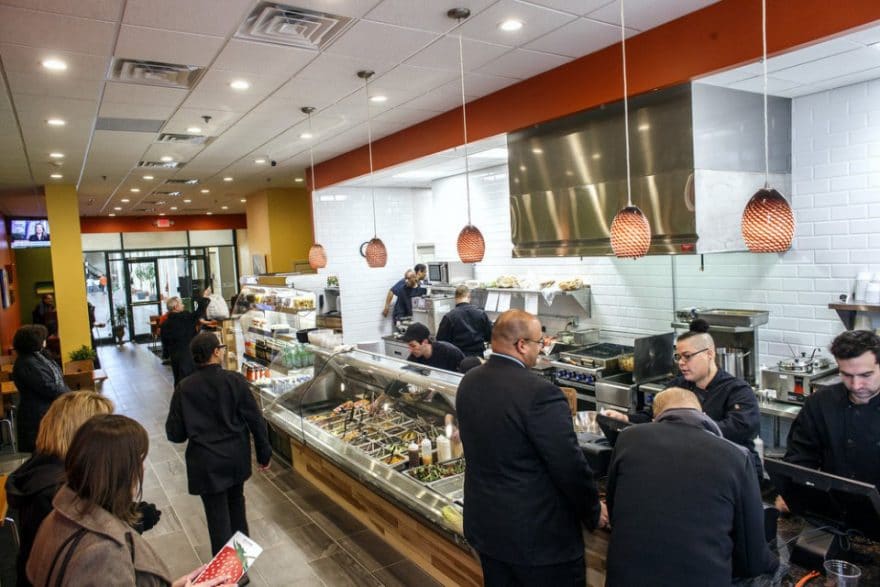 Strawberry Square is within walking distance of mass transit that includes 14 daily trains to Philadelphia. Easy rail access to and from other major cities acts as a Harrisburg selling point, says Jones. He adds  that the more outsiders see of the Pennsylvania capital, the more they may ponder the attributes of relocating and investing in an area that is regularly rated by such sources as Forbes and the Daily Beast as among the most desirable places to live and work.

For that, Harristown Development Corp. can take its fair share of credit.

“The original mission lives on,” Jones says. “The idealism of the founders continues to guide us. Like them, we believe in the constant revitalization, reinvigoration, redevelopment, renewal of downtown Harrisburg. We’re always trying to make our city more exciting, more livable, walkable, interactive.

“People all over the country now recognize Harrisburg for what it has to offer: a nice lifestyle in a small cosmopolitan city that’s within easy distance of tier 1 cities.”

Sees forest through the trees

Interestingly enough, Jones, now 55, majored in forest science with a minor in speech communication at Penn State University, graduating in 1985. But being a downtown development specialist didn’t mean the proud Nittany Lion had no use for his undergrad education when he joined Harristown in 2000 as a vice president, after three years with the Pennsylvania Department of Agriculture.

“Although I never became a practicing forester, I’ve helped plant trees all over the downtown,” he explains. “White oaks, maples, ginkgos, honey locusts—I keep a keen eye out for our downtown tree canopy.”

So a tree grows in Harrisburg—rooted in long-ago youthful idealism and ambition that’s brought to fruition the potential of a true Pennsylvania garden spot. 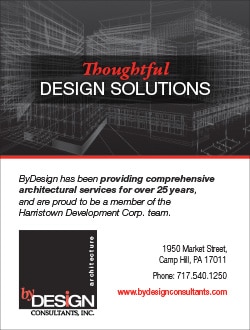