While outfitting a new research lab in Rahway, New Jersey, the facilities team encountered somewhat of an eye-opener. It seemed the new, young talent at Merck’s more than 100-year-old campus, wanted to feel connected to the pharmaceutical giant’s colorful history—through black-and-white photos.

Since 1891, Merck researchers had helped find new ways to treat and prevent illness—from the discovery of vitamin B1, to the first measles vaccine, to cold remedies and antacids, to the statins to treat high cholesterol. Merck scientists had also helped develop many products to improve animal health, including vaccines and antibiotics. 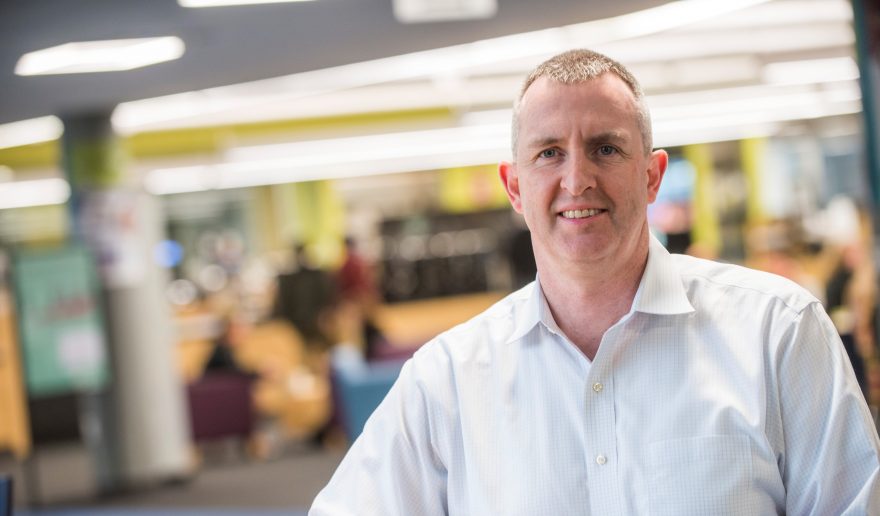 While focused on the present with an eye on the future, the newer scientists still wanted reminders of the past, as they joined efforts to advance treatments in such areas as hepatitis C, HIV, diabetes and immune-oncology. To honor that request, Don Watson, vice president of Merck’s Global Workplace and Enterprise Services, and his team, curated a large array of historical black-and-white photographs to complement the selection of colorful, modern artwork selected for this installation.

Something about the images of the men and women of Merck’s past— pictured in their white lab coats, diligently pursuing the science of their day—resonated with the younger scientists.

The new space harkens back to the legacy of science and discovery in these labs, while inspiring the researchers of today. A wall-sized portrait of legendary CEO George W. Merck reminds all who pass by of his famous words: “Medicine is for the people,” a mantra many Merck researchers seek to embody each day.

“It’s all part of creating a working space where everyone knows it’s a Merck facility without being told,” the congenial Watson tells Blueprint in April, from the company’s world headquarters in Kenilworth, New Jersey. “We’ve found it’s very important for our people to know they’re part of a company with a rich history. It can bring out the best in them.”

Of course, it’s not all about aesthetics.

Art is part of a progressive worksite that can give a company like Merck an advantage when it comes to tapping today’s talent pool. For as much as the next generation might find inspiration in photos of a bygone era, Watson knows they also are looking for cutting-edge technology and tools, as well as a collaborative work environment.

“Based on the way people work today, we know we can move away from the traditional large offices and high cubicle wall spaces,” says Watson, who has had a hand in some facet of Merck’s facilities operation since 2007. “It’s a more collaborative workspace today, one that’s defined by technology, and provides people with the tools and spaces to work where they need to be on that day, whether it’s in a company facility or a remote location. The time spent in an individual office has decreased.”

And there are spaces for downtime and relaxation—just as there are with other forward-thinking companies—realizing that worker productivity won’t lag if someone leaves their desk or lab for a bit to recharge their own mental batteries on a comfortable chair or in front of a big-screen TV. “But we won’t build playgrounds for adults,” Watson says with a chuckle. “Some companies may take it too far.”

Watson will take energy savings to another level, however. He’s proud to say that for 11 consecutive years, Merck has received the Environmental Protection Agency’s Energy Star Sustained Excellence Award for continued leadership in energy management in both the pharmaceutical and industrial sectors. It’s actually the 13th time Merck has been recognized as an Energy Star Partner of the Year, a record in which the company can take pride. 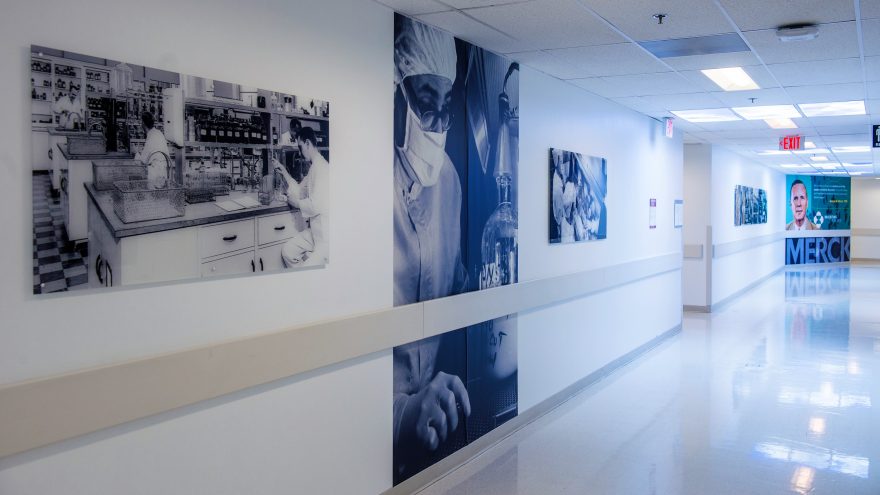 It’s the same for disability inclusivity and accessibility at Merck. Watson says that part of his job is ensuring that all employees have the facilities and accommodations they need to perform to the best of their capabilities.

And that goes for his management of company facilities in general.

“I find the work to be very satisfying—this opportunity to work with great scientists and contribute to getting medicine to patients worldwide,” says Watson, who has a BS in chemical engineering from Bucknell University and an MBA from Seton Hall University. “But it’s still a journey that we’re on, although we’ve gotten a lot smarter along the way.”

For Watson, it can also be a literal journey.

His company’s success is based upon the talent of its people, and that means going to areas with renowned universities, hospitals and start-ups that can contribute to Merck’s mission of exploring and addressing the world’s unmet medical needs. It’s up to Watson to ensure that Merck’s new operations can be up and running within budget and without undue delays, and that means a lot of time on the road. 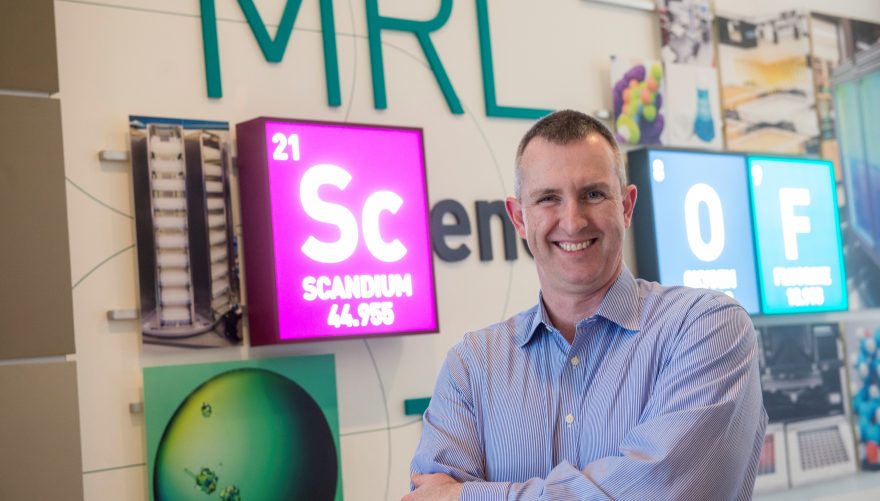 “It’s important for someone in my position to understand the markets we’re working in—the different cultures, business challenges and real estate,” says Watson, back home for at least a short duration after productive swings through Boston-Cambridge, San Francisco and London, all of which either have new facilities in operation or in the planning stages. “We like places where we can tap into the talent and entrepreneurial spirit.”

Long a presence in Boston, Merck crossed the Charles River into Cambridge in 2014, purchasing Idenix Pharmaceuticals and its 50,000- square-foot facility, and converting it into a microbiome research site that opened in late 2016. With ample talent at Harvard and MIT, as well as at some impressive new biotech firms, Cambridge is a natural choice for Merck, although Watson says it can be a challenge finding space in such an urbanized environment.

Across the U.S., on the other coast, Watson is encouraged that a south San Francisco project is moving along smoother than expected, with construction of a nine-story, multidisciplinary lab, well underway and expected to be operational next year.

The West Coast has its own deep talent pool, says Watson, certain that this facility won’t hurt for prospects. Meanwhile, in London, the company has committed to a research hub expected to employ nearly 800 of Britain’s best and brightest. The company won’t publicly comment on the total cost of the project, but the Financial Times estimated it would spend about £1 billion for the project, though Reuters reported that the company said it was too early to predict the total outlay.

By year’s end, Watson’s travels will likely have included Asia and Latin America—there being few places where the company doesn’t have some presence. While that’s many cultures to be taken into account while building and renovating facilities, Watson says the company brand will stand out.

“This responsibility is as much about people as it is about real estate,” he says. “We saw that in Rahway.”

Someday, a new generation of Merck researchers will be admiring images of today’s millennials hard at work. Only those images will likely be holograms. And the black-and-white photos may still remain as reminders of Merck’s legacy of more than a century, and the promise to continue to discover innovative medicines and vaccines to save and improve lives. The real estate and facilities management team will be there to help ensure the ongoing legacy will be sustained. 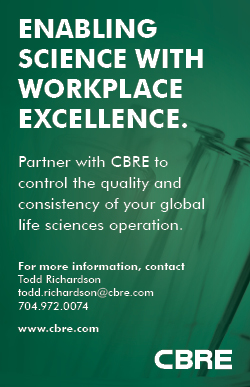