It’s the kind of record-breaking achievement that only gets noticed by those concerned with pipeline infrastructure. Who else gives a second thought to what’s underfoot as long as the utilities are duly humming?

But as long as such matters can be taken for granted, somebody must be doing something right, and in the summer of 2018 those somebodies were wearing the high-visibility safety gear and hard hats of Progressive Pipeline Management (PPM). 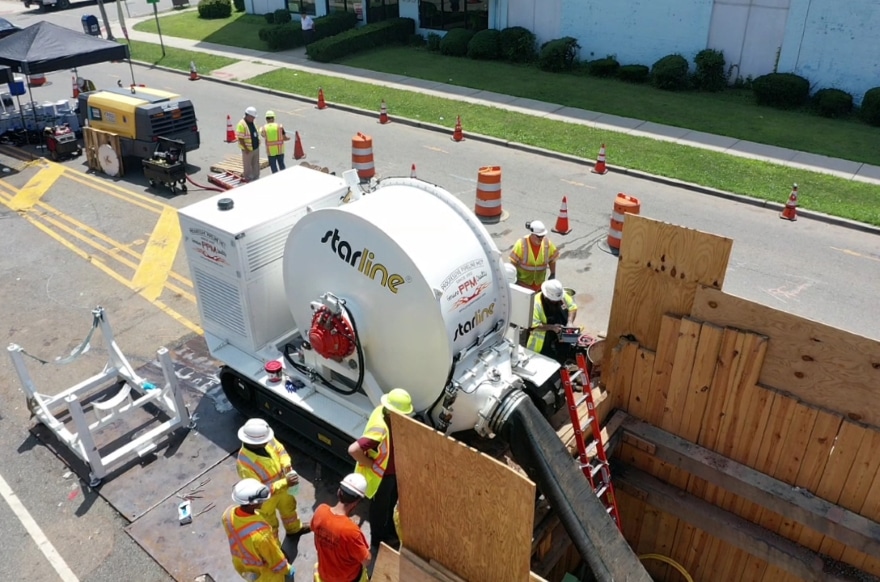 A Wenonah, New Jersey, company entrusted by one of the nation’s largest natural gas utilities to extend the working life of a 1950s era cast-iron gas main under a busy road framing Seton Hall University in South Orange, PPM was undertaking one of its biggest challenges to date.

Public Service Electric & Gas (PSE&G) had identified multiple joint leaks along a critical stretch of 2,000 linear feet with a 36-inch cast iron gas main running among a web of water and sewer mains, telephone and electric lines, television cables and storm drains. Long a strategic partner with the PSE&G, PPM would set a new record for the largest diameter gas main renewed with the Starline® Cured-in-Place Lining (CIPL) technology that cures and bonds to the aging pipe, alleviating the need for a new one.

With this revolutionary trenchless technology, the need for a long, disruptive and costly open cut trench was replaced with a few strategically located access pits. The project was completed with little or no disruption to the city’s day-to-day activities and garnered PPM the 2018 Project of the Year award in the rehabilitation category by the industry publication Trenchless Technology.

Nine months after receiving that prestigious citation this past summer, PPM broke its own record by lining a 600-foot section of a 42-inch diameter gas line, the largest diameter ever lined. This cast iron gas main ran on either side of an overpass and underneath the Garden State Parkway in Orange, N.J. The liner was installed from one side of the parkway, down an 80-foot embankment, under the parkway and back up the opposite side.

Speaking to Blueprint in October, PPM founder and Chief Executive Officer David Wickersham explains that the larger the diameter of the gas main, the more materials, adhesives and heavy equipment it takes to rehab it.

“We had a lot of experience with the 20-inch to 30-inch pipe and learned a lot on the 36-inch project of the year job, but the 42-inch pipeline with its changing geometry and multiple offset beds presented a whole new game,” he says. “It took months of planning and preparation with PSE&G, though the actual installation was just two weeks after we broke ground in June. But that’s the nice thing about our technology: It’s designed to save time and costs, and this did indeed.” 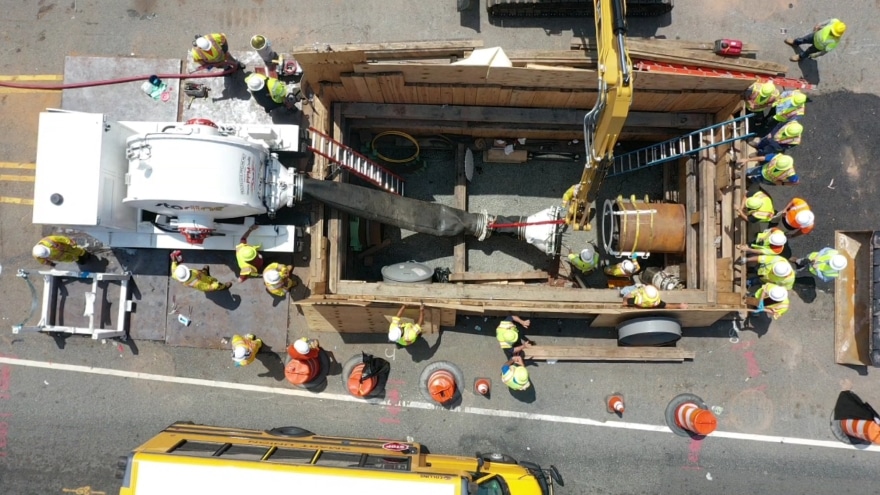 PPM’s projects, including the 42-incher, have tremendous technical support from the company’s friends and partners in Berlin, Germany, Wickersham goes on to say. PPM is the exclusive North American licensee of the Starline CIPLTechnology through Karl Weiss Technologies, the German-based manufacturer and patent holder.

Starline is the best natural gas distribution company option for rehabilitation with their mazes of large diameter cast-iron and steel pipelines. Wickersham says PPM’s services are much in demand in the heavily industrialized geographic triangle connecting the mid-Atlantic, the Northeast and Chicago, and his crews have undergone extensive training in-house and from Karl Weiss Technologies.

Be it for a 1-inch or 42-inch diameter pressurized pipe for the various industries PPM services, the first stage of rehabbing might be likened to an unpleasant medical procedure—a robotic CCTV camera inspection. Then comes a thorough cleaning followed by the lining process with Starline technology. After the liner has fully cured a full pressure test of the lead pipe is performed to ensure a quality installation.

Wickersham says that independent testing on rehabilitated pipe with the Starline technology has confirmed a service life of 100-plus years. The natural gas industry has invested over $15 million in testing of the liner and its capabilities at such esteemed institutions as Cornell University, Battelle Labs, ASTM, NYSEARCH and PHMSA. PPM now has liners capable of installation at a maximum allowable operating pressure of 99 PSI, 180 PSI, 250 PSI and, sometime soon, 450 PSI.

The oldest structure PPM has serviced has been a 16-inch main at the base of Brooklyn Bridge, where a cast-iron pipeline was leaking gas through joints weakened by New York City’s extreme weather and traffic load. As a bonus, Wickersham says that while his crews have worked on such projects, they’ve uncovered other structural issues that needed tending.

“The work we do dovetails into so many areas,” he says.

In something of a roundabout way, Wickersham can credit the nautical industry with inspiring him to found PPM in August 2002. A 1993 graduate of the U.S. Merchant Marine Academy at Kings Point, Long Island, he’d be deployed to the Middle East on a ship contracted to the military during the first Gulf War and Desert Shield. After that first war, he’d spend five years with National Response Corp., a major provider of comprehensive oil spill response services to the oil and petrochemical industry as well as large oil tankers navigating fully loaded through U.S. waterways and ports.

“The biggest spills we ever responded to came from pipelines,” he says about his stretch with National Response Corp., which coincided with the 1996 pipeline burst that resulted in over 1 million gallons of diesel fuel pouring into South Carolina’s Reedy River. “I thought pipeline infrastructure is where I wanted my career to focus.” 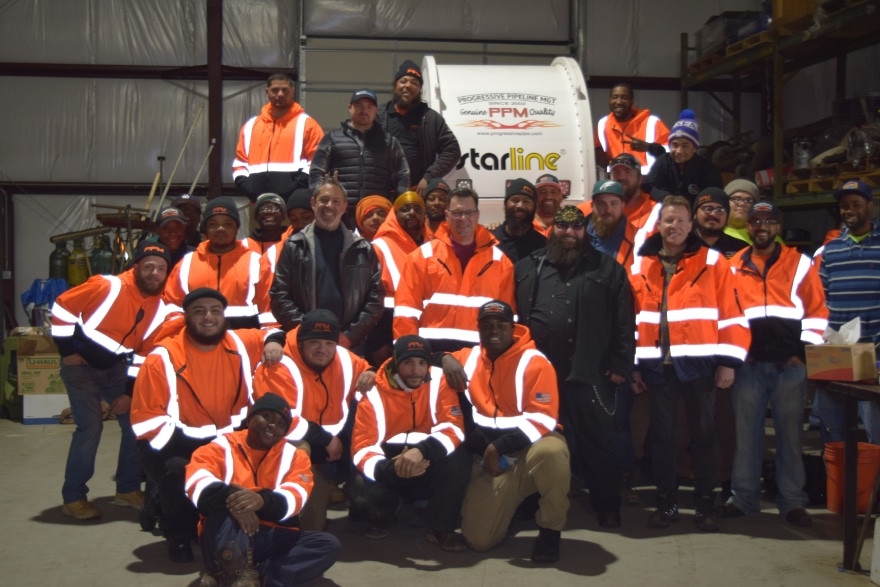 Some more experience would help Wickersham’s cause, and he’d spend four years with Enviro Jet Technologies, which provided a compliance based pipeline decontamination service to the natural gas, electric and petrochemical industries. Meanwhile the need for spill remediation would only grow, reasons ranging from the 1989 Exxon Valdez disaster in Alaskan waters that resulted in Oil Pollution Act of 1990 to the millions of barrels Saddam Hussein poured into the Persian Gulf after the first Gulf War.

Wickersham says his company can do just fine without such disasters, as there’s steady business in just bringing new life to old pipes. Repeat business is heavy, as PPM’s core clients in the oil, natural gas, petrochemical, and water and wastewater industries are thriving.

While he expects continued growth with a new Long Island-based facility closing in December and two more regional locations on the horizon all augmenting his Wenonah headquarters, Wickersham says one key challenge is rounding up and retaining a skilled workforce.

“We need a certain type of guy—a technical road warrior,” he says. “One who can travel much of the year, and oftentimes far from home. One who can do more than just dig dirt and lift a shovel. One who will commit himself to intense training in not only the technical aspects of the Starline process but also embrace our number one priority of health and safety.”

For such people, the rewards are there, Wickersham says. The married father of two has found PPM to be quite the wise move, one that’s resulted in a thriving company that performs critical work, the need for which only seems to grow.

“In today’s political climate, we hear a lot about infrastructure,” he says. “The spotlight always seems to be on bridges and highways, but underground pipeline infrastructure must be a part of the national conversation with much-needed attention. Hopefully both sides of the congressional aisle can continue to recognize the critical needs of our national infrastructure, including pipelines, and work together with the private sector to address these needs while keeping new technologies, like Starline, in the forefront of the conversation.”