Building environments for security and success

He can’t disclose much about his employer’s projects, many of which involve the U.S. Department of Defense and its contractors. Suffice to say, Corporate Office Properties Trust and its director of government construction, David Norfolk, are expected to meet high standards—and keep details under wraps.

Headquartered in Columbia, Maryland, COPT is a NYSE-traded real estate investment trust and a preeminent provider of real estate and other services to the federal government and defense/IT contractors, with more than 22 million square feet of office space near its clientele. It counts 80 percent of the top 20 U.S. defense contractors as tenants. 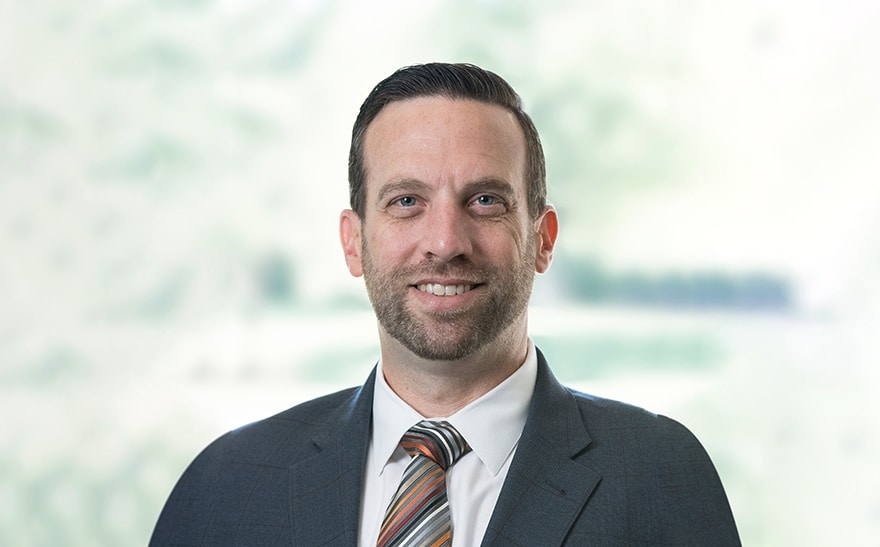 COPT’s current projects include a 1 million-square-foot Northern Virginia office park for the Intelligence Community, with Norfolk overseeing the budget and schedule. While he’s reticent to even reveal the location, Norfolk can talk about what’s at stake for the company—and its client.

The undisclosed Northern Virginia locale should do just that, Norfolk says. Scheduled for completion in 2023, it’s been in the works for three years. The high rise structure will augment a four-building campus, which will increase to six.

The entrance is adorned by “Winged Victory,” a 25-foot-high stainless steel and glass sculpture by noted California artist Craig French. With three Nike-like swooshes joined by a circle in the middle, “Winged Victory” seemingly expresses the sky’s-the-limit mindset of DoD—and some of its contractors who will share the campus.

“It’ll be quite the centerpiece of the campus,” Norfolk says about the ground-up in progress. “Aesthetically pleasing and economically practical.” 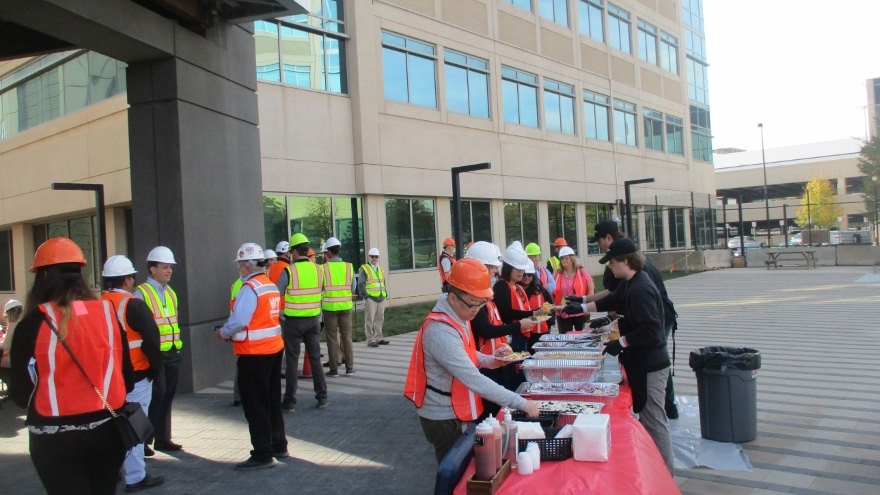 While any major construction project presents some logistical challenges, Norfolk emphasizes how much more intense it is with the federal government as a client. More specialists get involved, often requiring a focused approach to physical and data security. Much of the construction having been done during a once-in-a-century pandemic, Norfolk says COPT has had to deal with unprecedented concerns.

“COVID could be a morale killer,” he says. “It had the greatest effect I’ve ever seen on workers in the field. Obviously, there were supply chain issues too. In Virginia it was hard to get electrical equipment. In Texas, it was hard to find roof fasteners.”

But with stakeholders still expecting results, Norfolk says COPT addressed all concerns as well as possible, without undue delays to project timelines. In some ways the company adapted to new construction processes that should prove valuable post-pandemic.

“The biggest evolution has been in technology,” he says. “Now everyone in the field has an iPad or smartphone to document progress or to submit requests for information. With speed and scheduling compressed, projects can run smoother.”

While most of Norfolk’s projects are defense-related, he’s also overseen the assembly of data centers, which have been in high demand of late. According to the North America Data Center Trends Report, last year saw a record for cloud growth—493 megawatts of net absorption of data center space in seven primary U.S. markets—and 2022 is on target to beat it.

Norfolk’s in the process of adding three data centers in Northern Virginia. It’s an intricate process that includes working with utilities on technological matters while dealing with neighborhood associations on siting issues. Owing to a shortage of open 20-acre landscapes in this congested region, COPT often looks to redevelop existing properties and, in the process, bring vibrancy to otherwise underachieving parts of town. 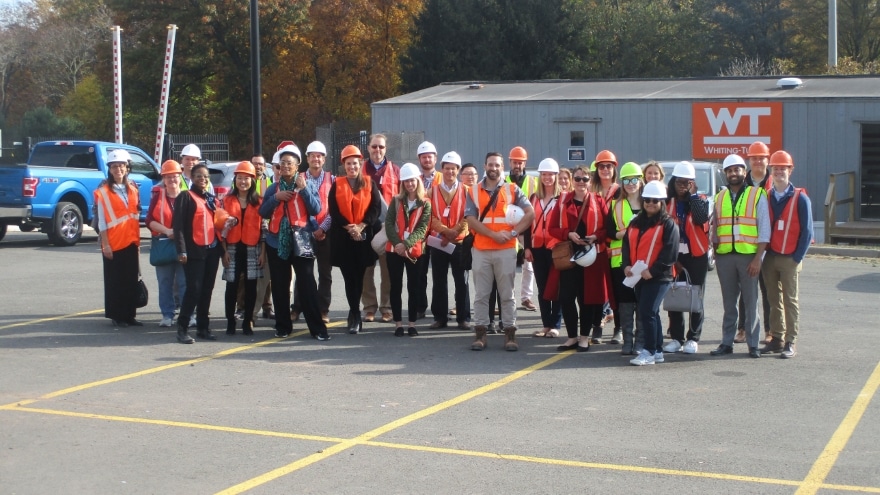 It’s a challenge, Norfolk says, to meet stringent codes while satisfying COPT’s stakeholders. The company isn’t just a landlord—it’s a partner to the U.S. government, defense and IT contractors. And how satisfying he says it is to see a project to fruition.

“It’s the greatest achievement to see that ribbon being cut,” he says. “It takes everyone pulling together to make that happen.”

As to how Norfolk wound up in his position, it started with an early interest in finance, which he majored in at Maryland’s Salisbury University.

But he also liked assembling structures, working construction jobs during the summers at iconic Baltimore sites such the Sparrows Point Steel Mill. Construction management proved the right fit, and after graduating in 2002, Norfolk took a job as an assistant project manager at Chesapeake Contracting Group in Owings Mills, Maryland.

Less than a year later, he moved into a similar role at COPT. He started out with small assignments, then built entire floors for government and defense contracts, and now focuses on defense and data centers. In his nearly 20 years on the job, Norfolk has earned multiple promotions, his most recent in November 2020. 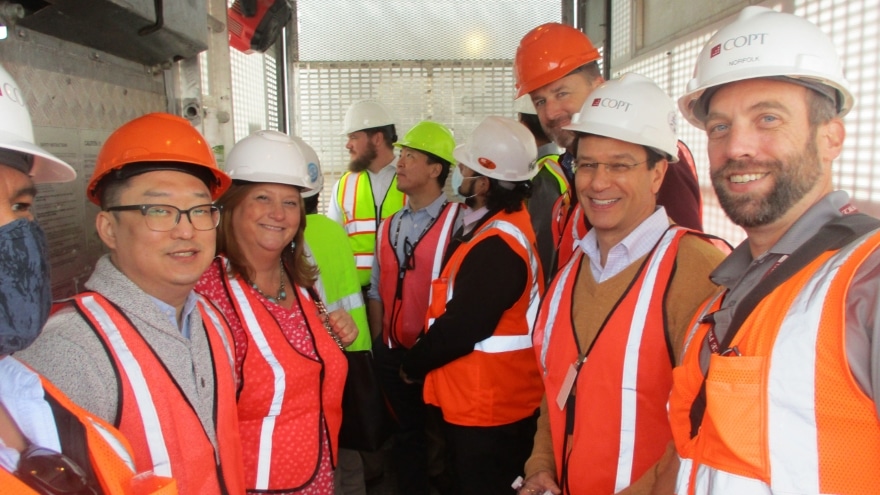 He’s overseen projects in many places, from Maryland and Virginia to Texas. A recently completed Texas project, supporting Lackland Airforce Base, was 17 years in the making and covers an area equal to around nine football fields. More than 2 million man-hours went into building the facility, providing a huge benefit to the regional economy. As to what goes on there, Norfolk politely reminds he won’t risk violating confidentiality but how satisfying it is to help meet a national interest.

“I’ve found a place where I can merge finance and construction,” says the father of a 3-year-old son and 1-year-old daughter with his fiancé. “I have the opportunity to manage a team and, at the end of the day, drive home, point to a building and say, ‘our team built that.’”

But that’s often the extent of what he’ll say. 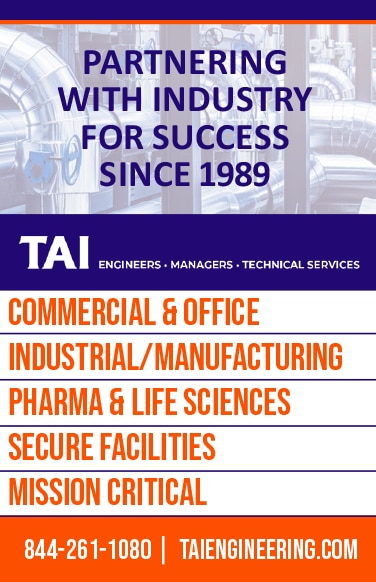