Home, home on the Navy Pier

They built it and people came. But more importantly to Dan Mitchell, when they reopened Chicago’s Navy Pier in March, people came back.

Pre-COVID-19,  Navy Pier drew more than 9 million visitors annually—people coming to shops, restaurants and attractions Mitchell helped develop in a career that’s brought him back to the pier repeatedly over the last 30 years. 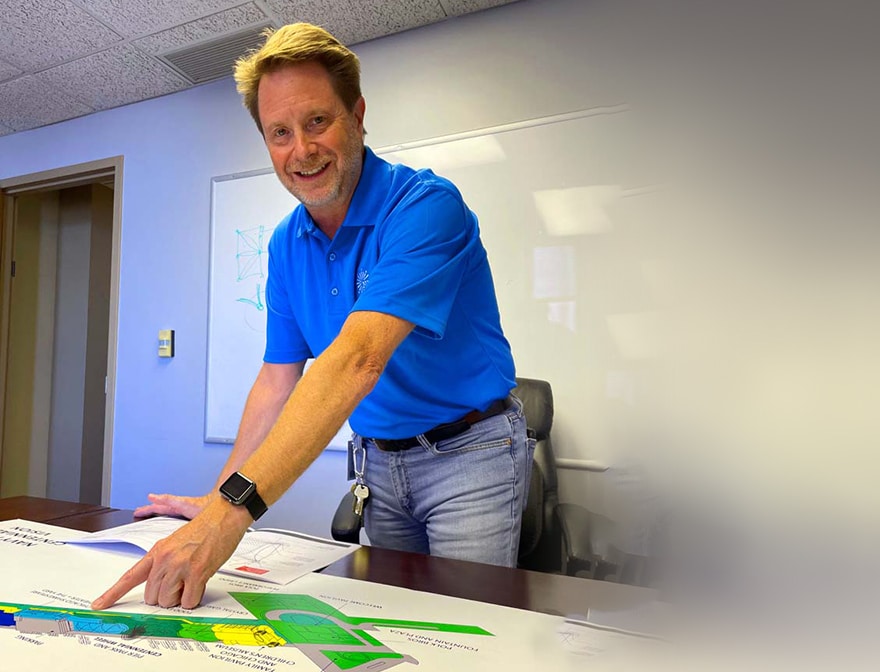 Now the vice president of design and construction for the nonprofit Navy Pier Inc., Mitchell is helping guide its reopening and use in a pandemic world.

While Navy Pier started hosting concerts and events in the spring and early summer, some of its onsite partner venues, including the new Sable Hotel, were just reopening with pandemic-related restrictions as Mitchell chatted with Blueprint in the summer. And, he says, the Pier has needed to employ high-tech to avoid overcrowding.

“What was taken for granted, like filtration for air design and how people use restrooms or line up for restaurants, has changed and continues to evolve,” Mitchell says. “I’m passionate about my work and design and bringing quality construction to my clients. Here at Navy Pier, that’s the public.”

At 292 feet wide and stretching 3,000 feet into Lake Michigan, Navy Pier opened in 1916. Built at the mouth of the Chicago River, it was a connecting point for railroad and shipping lines. It’s also been the undergraduate campus for the University of Illinois at Chicago and partner to McCormick Place, used for conventions and trade shows.

Originally called Municipal Pier, it was renamed Navy Pier in 1927 in honor of Navy veterans of World War I and used for training and as quarters for military personnel in both world wars.

The pier fell on hard times in the 1970s, though it remained in use for festivals and concerts. In the early 1990s, the Metropolitan Pier and Exposition Authority sponsored a competition to redesign Navy Pier. At the time, Mitchell was a senior vice president at VOA Associates (now Stantec). VOA won the competition, and he was assigned to manage a project he says included tearing down 75 percent of the pier’s buildings. 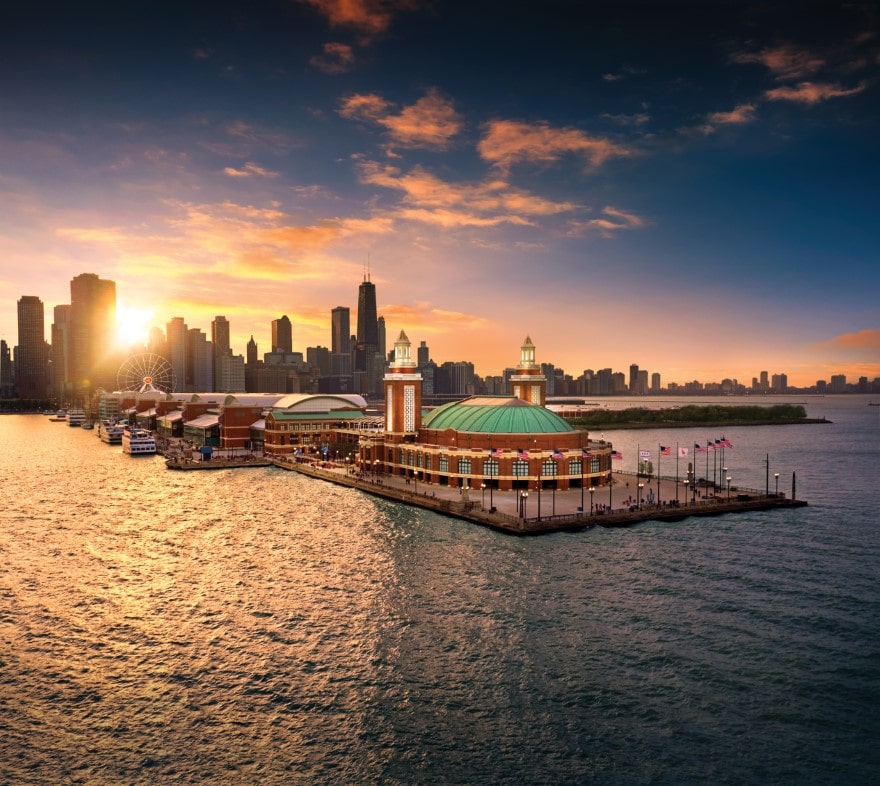 “I basically lived at the pier,” he recalls. “We retained bookends of historic buildings and infilled the rest to what it is today.”

Mitchell was then managing principal at HOK’s Chicago office. The firm did not win the contest, but he was eventually recruited to join Madison Construction to oversee the construction of the Navy Pier’s South Dock Promenade.

The project included steps influenced by Rome’s Spanish Steps, a new 200-foot Ferris wheel, and new kiosks and pavilions for operations and ticket sales, all linked by the promenade with expansive views of Lake Michigan.

After helping guide two projects on Navy Pier, Mitchell became vice president of design and construction for Navy Pier LLC in March 2020. By that time, a new hotel with 223 rooms was nearing completion, and a $6 million renovation of the Festival Hall’s lobbies and primary vehicular drop-off was underway.

Two weeks after Mitchell began his job, the pier closed because of the pandemic. At the time, no one was sure how long it might remain closed, and Mitchell says it took a month to completely shut it down. (At the same time, he made sure construction projects could continue safely.)

The closure made for a quiet summer on Lake Michigan. Because it’s operated by a nonprofit, the loss of revenue from 9 million visitors jeopardized its reopening. Navy Pier LLC fundraising, including a virtual celebration, brought in about $7 million, but how to reopen safely remained in question.

In March 2021, Navy Pier promenades and plazas reopened although restaurants and shops remained closed until Memorial Day because of city and state restrictions. 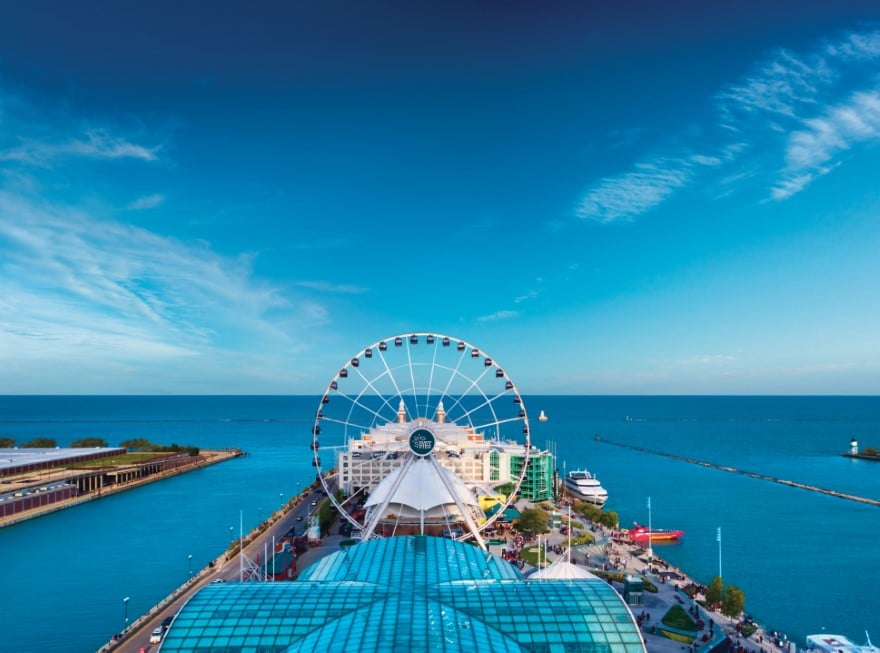 “Getting through COVID-19 was a real challenge, but the energy when they reopened, and seeing thousands of people back on the pier, was heartwarming,” Mitchell says.

But good fortune and glad tidings could easily be washed away without proper safeguards. Signs were posted and floors were marked to set safe distances to gather. Reminders to mask up were broadcast and Navy Pier LLC now uses its Wi-Fi and cell antennas to pick up phone signals, indicating how many people are gathered in zones along the pier.

Employees are alerted well before crowd numbers become unsafe and Mitchell says “social distancing ambassadors” then move through crowds to politely disperse them.

It’s not hard to envision Mitchell painting scenes on Navy Pier. The Detroit area native is from a family of artists who also taught at Cranbrook Academy of Art.

He began his career in New York City in 1983 as a project manager and architect, then went to London in his first job with HOK. In 1990, he moved to Chicago to join VOA Associates, and he’s been in Windy City since, taking on executive roles at private firms before joining Navy Pier LLC.

If at times he’s spent more time at Navy Pier than a sea gull, he’s fine with that.

“I get to wake up every day and love what I do,” Mitchell says. “Every day is different—I’m meeting with a tenant who roasts nuts, another who has a huge children’s museum, or I’m working on roof repair or designing new canopies for our performance stages.”

categories: Building for the Future, Entertainment 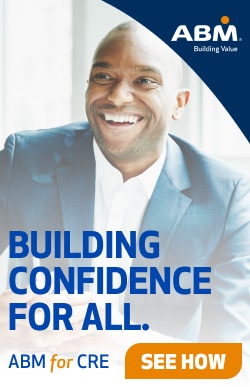 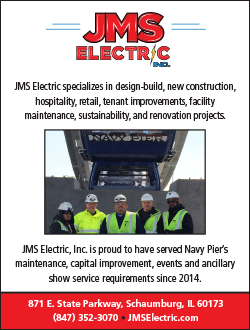