Check out any time you like, but only with a degree

A 17-year-old Wesley Cooper would never forget the haunting screams of a woman burning to death in a car fire—and he never imagined his efforts to save her life would lead to a multiple careers.

Seeing her car aflame in a ditch as a passerby, the teenager rushed to her aid, attempting to break the windows to pull her from the wreckage. She died at the scene. 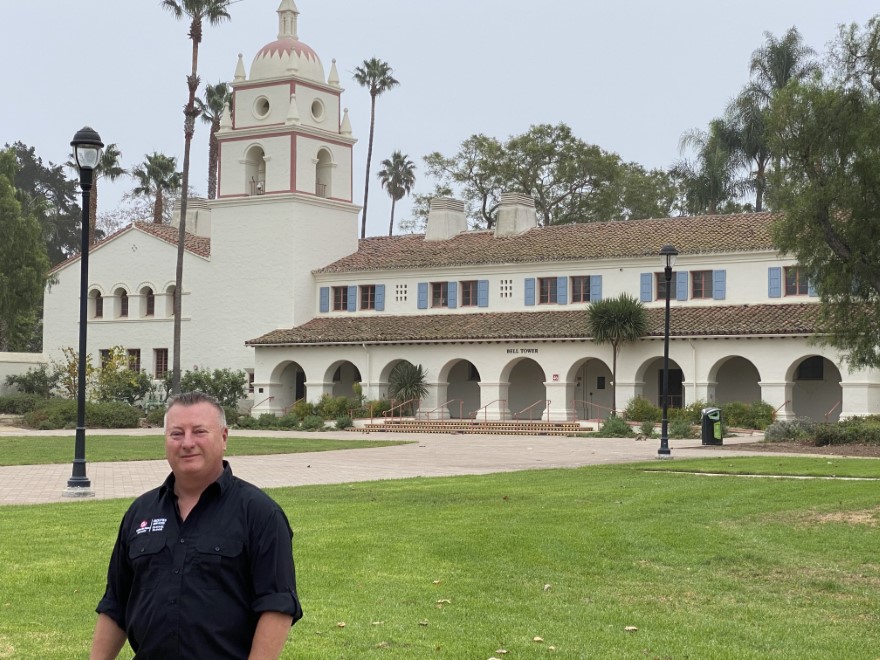 But his story doesn’t end there.

Inspired by the heroic service of the firefighters, Cooper became a one, went to night school and was eventually hired as a professional firefighter and EMT for the former Camarillo State Hospital.

The hospital was purchased in 1998 and became California State University Channel Islands. Cooper transferred to the facilities department from the State Hospital Fire Department and started his new career in the skilled trades. Working his way up, he’s now the senior director of facilities services since 2010.

“My career stemmed from the experiences supporting the person next to me,” Cooper says. “I believe in compassion and putting my life on the line for others.”

While CSU is the newest university in California’s public system, opening in 1998, its historic mission-style buildings date to the early 1930s, back when the site was Camarillo State Mental Hospital. Transforming them to a site of higher education was an ambitious project, says Cooper. 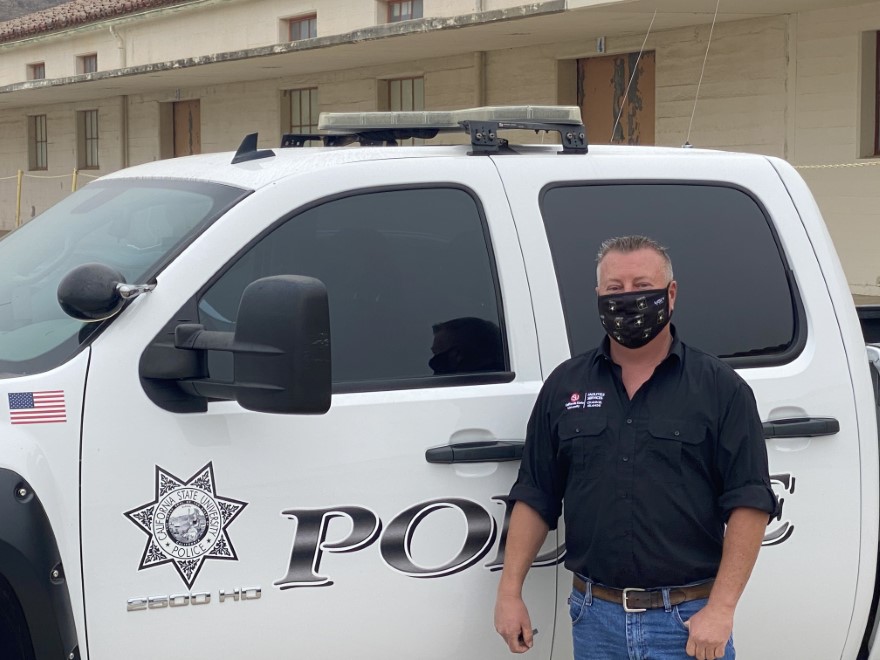 “We wound up with quite a bit of sanitary sewer line failures from old cast iron lines that split, and aged waterlines failed and leaked into our crawls spaces,” says Cooper, adding another large hurdle was asbestos and lead that had to be abated.

On the exterior, the mission-style look was preserved, while new structures were built in similar style. The challenge was tying the newly-renovated spaces and new buildings into the aged infrastructure.

“We married up new construction with the existing buildings to create an aesthetically pleasing environment rich with history and tradition. Now have a modernized campus five miles from the ocean,” Cooper says. “It’s beautiful.”

Nice as it was, Cooper left for a few years, working at Humboldt State University as a project supervisor from 2007-10. When he returned to CSU in 2010 in his current role, he turned his sights to maintenance.

“No need to wait for something to fall into disrepair, or end up with critical failure,” he says.

As he explains, the property’s history of “reactive maintenance” meant old equipment would be used to its breaking point. While that might seem to save money, in the long term, he says it was costing CSU thousands of dollars annually the old systems caused unplanned outages and shutdowns. 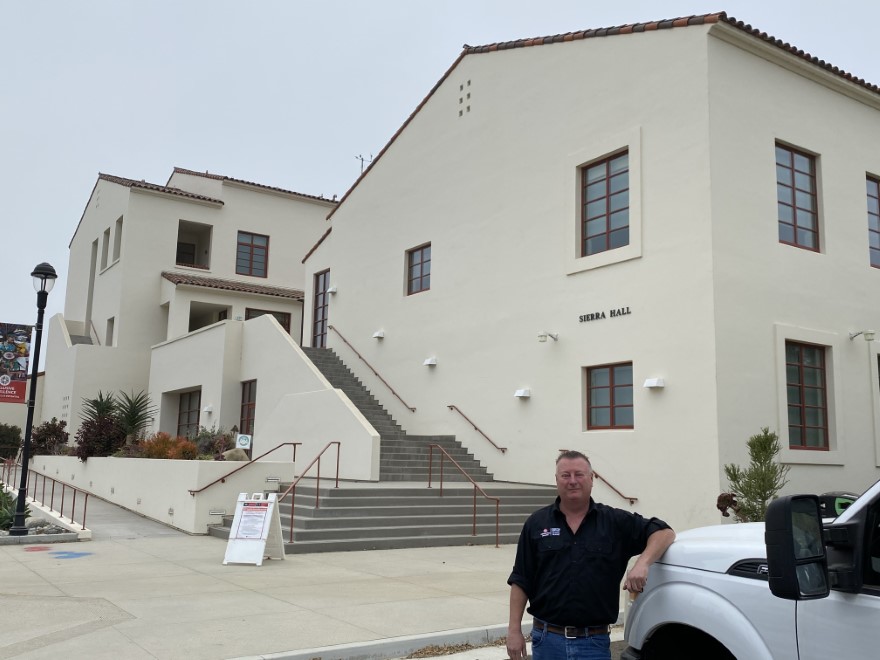 The procedural change also meant Cooper’s maintenance team went from checking everything twice a year to once every three years with the new data. Financially it reduced CSU’s reactive maintenance program from 95 percent to 10 percent, saving the equivalent of two full-time staff members annually—a savings that could be used on equipment replacements or small deferred maintenance projects.

“We don’t want to be putting out fires all the time, we want to be in a good spot,” says Cooper.

Still, there was a large backlog when Cooper arrived. Fighting a backlog of projects estimated at $14 million (with an annual deferred maintenance budget of $300,000), Cooper went to administrators to plead for more funding.

“I told CSU without support, we wouldn’t have a viable home to teach in,” he says.

Message heard, CSU agreed to fund $1.2 million annually for deferred maintenance. To make it stretch, Cooper gave employees overtime rather than outsourcing projects, opting to give the team smaller deferred maintenance projects in-house. If a project was tagged at $200,000 with contractors, his team could do it for $120,000—and the remaining $80,000 could be applied elsewhere. It allowed CSU to get caught up and helped Cooper make the most of limited resources. 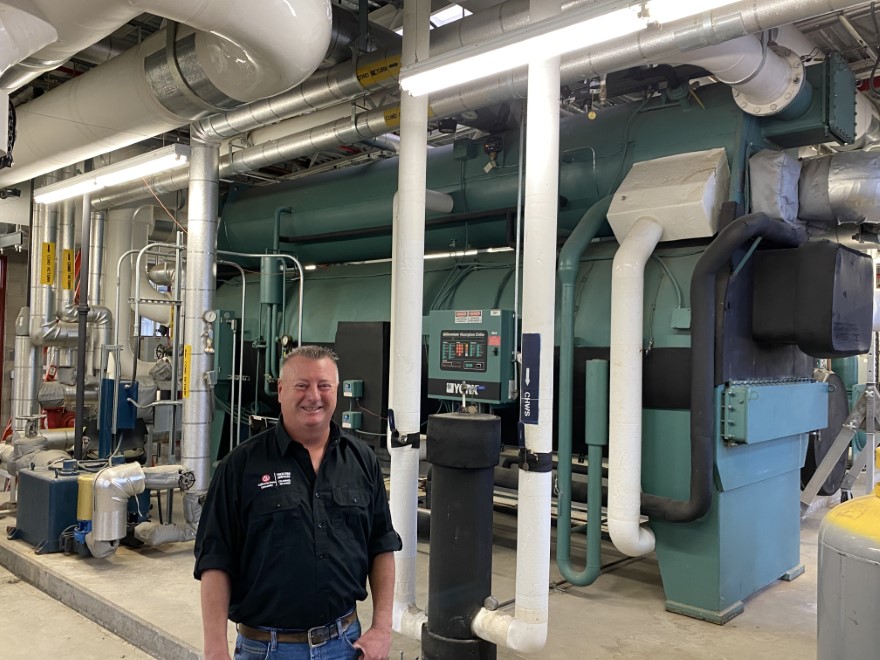 But even with the best laid plans, CSU, like other institutions, initially closed with the pandemic. His operations staff of 30 was cut down to three in operations—as well as keeping a 30-person groundskeeping team and custodial staff of 30—which were all deemed as essential.

With all school administration telecommuting, he says only 10 percent of students had returned to campus as of November, mostly for lab-related classes. The remainder had resumed studying online, and the student dorm population of 1,700 was down to 200, with one student per unit.

“The place is a ghost town,” Cooper says.

But one area that certainly wasn’t quiet was Los Angeles, where Cooper—an Army sergeant with the California State National Guard since 2017—was deployed in June during California’s state of emergency.

“I’ve been called every name in the book for wearing the uniform, but I am here to help my community,” he says. 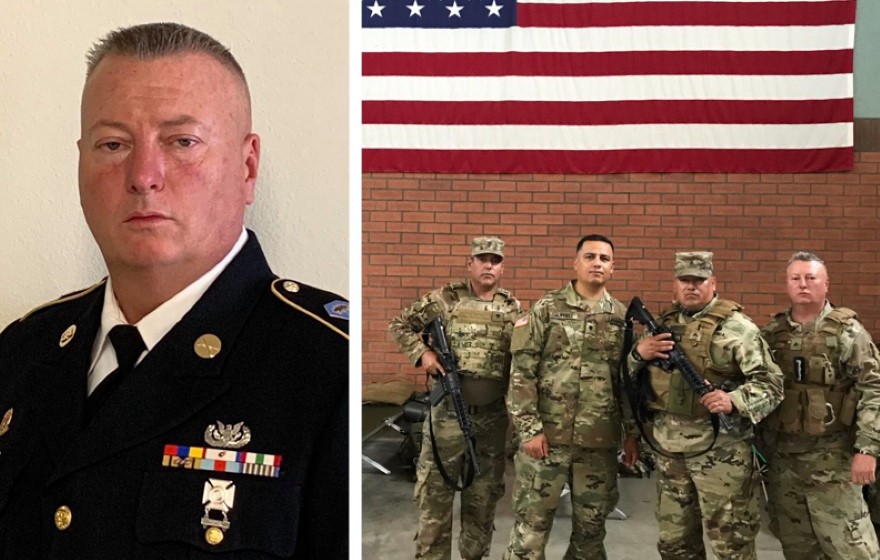 When not on security detail during the demonstrations, Cooper packed and distributed food with Food Share and the Air National Guard. He also provided armed security to protect buildings and police vehicles from getting set on fire or looted.

“There are still problems—but things are calm for the moment,” Cooper says.

Regardless of the project, Cooper’s ready to get involved. Professionally he’s also equipped with California certification and licensing in structural and decorative concrete installation and contracting. He’s also certified as a California state firefighter and EMT from Oxnard College in 2006. He added a certification from the Alan Hancock Law Enforcement Academy as a Level II Reserve Officer in 2008.

“Service—no matter what I’m doing—is in my blood,” Cooper says.

Developing leadership skills from every setting he’s served, job satisfaction for Cooper comes from working with others and inspiring the next wave of employees finding their way—just like he did years ago.

“The best part of my job is passing on knowledge, empowering people and watching them change,” Cooper says. “It’s like planting a seed and watching it grow. We will all get by peacefully when we treat each other better. It’s all about humanity.” 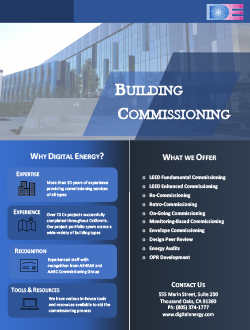 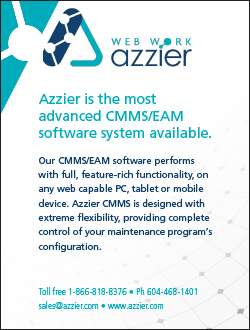