Forging progress at The Foundry

There’s life yet in The Foundry, a different kind of existence to be sure than when it was the foremost metal-casting facility in Kalamazoo, Michigan.

But workplaces may have to change in order to be relevant and this one sure has, with the industrial work of another era giving way to 50,000-plus square feet of shared office space, and forthcoming amenities such as a farm-to-table restaurant that should begin serving tasty, nutritious fare by Halloween. So confident in the renewed heartbeat of this facility is the construction manager that it became the first tenant right after the late July opening. 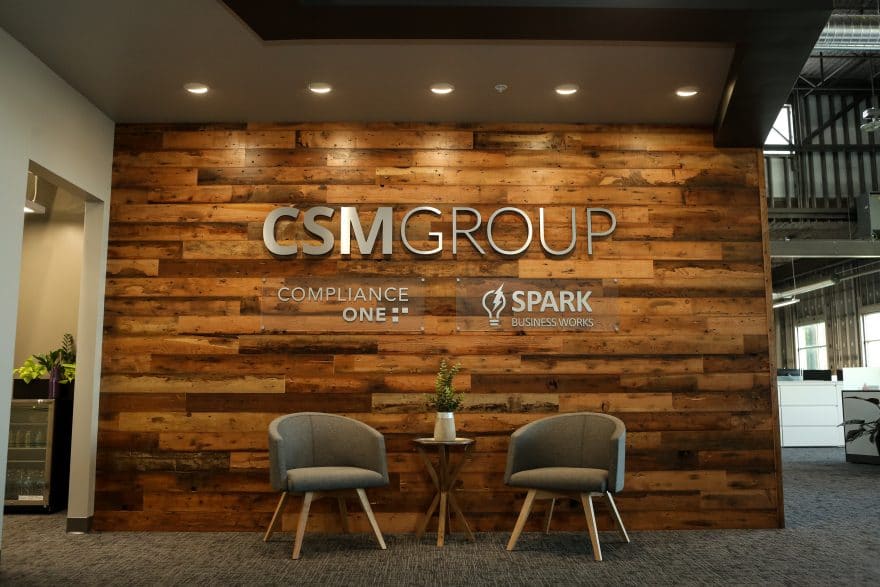 “It’s always nice when you can reuse a facility like this and bring new talent, new business back to the downtown,” Todd McDonald, the affable president of CSM Group tells Blueprint in late August, with his company still getting settled in one of four 8,000-square-foot quadrants of collaborative office space. “We love it here. We just had our open house, tying it into a monthly event put on by an economic development group in town.”

Joining McDonald on a panel that summer day were representatives of some of the other partners, among them property developer Treystar, Marx Moda, furniture supplier of Herman Miller Inc., and architect/engineer Eckert Wordell.

With local officials mingling with builders and other business people, all agreed that Kalamazoo could use more such projects geared to attracting the kind of bright young people that bring vibrancy to a downtown.

Don’t box them in

Those cubicles so parodied in “Dilbert”—well they don’t bring out the best in the cartoon character, and progressive-minded bosses might say they also don’t do much for productivity in the real office world.

The 30somethings of today, the so-called millennials, want a more collaborative, campus-like environment, the so-called living office concept, and even their older colleagues may see the wisdom in a personal touch that can create a more high-performing workplace. 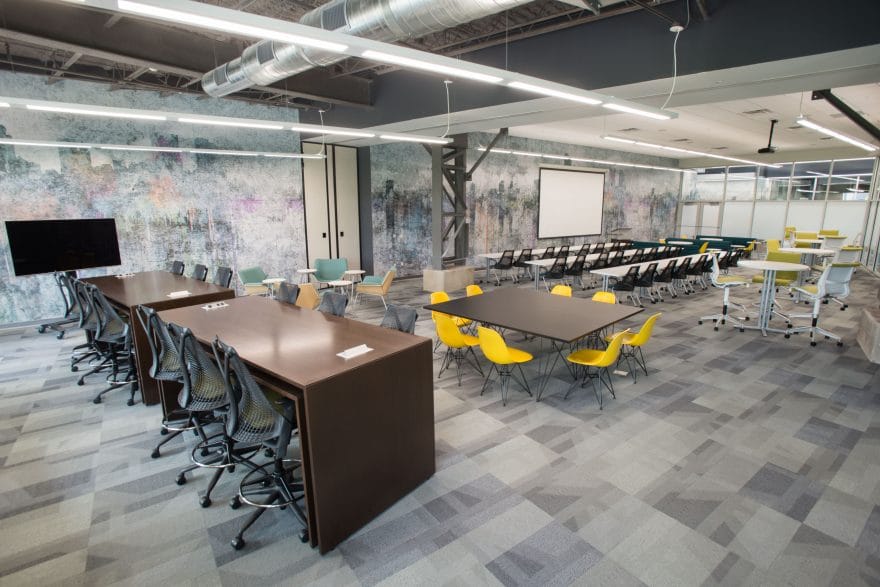 Whatever their ages, they will find it here. When complete—and the $10.4 million Foundry project was moving right along as summer neared fall—there’ll be the 600 Kitchen & Bar with four tenants around a shared plaza area, adaptable conference rooms and break-out spaces for the kind of spontaneous huddle that can define the contemporary modus operandi, and access to outdoor jogging and walking paths.

Fritz Brown, partner at Treystar, told the local media that The Foundry’s demographic is geared toward young tech workers, the very people that Kalamazoo has been losing to places like Detroit, Chicago and even Grand Rapids 50 miles to the north. To be sure, there are reasons aplenty for building a career in Kalamazoo, where economists say job growth is expected to reach 40 percent over the next decade.

The work force won’t forget it’s in a factory; that’s part of The Foundry project’s charm. The exposed beams, wide halls and high ceilings bring their own ambience, only with all the hi-tech friendly and energy- efficient features so necessary to the modern workplace.

Renovating and outfitting what used to be the Kalamazoo Foundry & Machine Co.—built in 1907 and largely vacant after a century’s wear and tear—was well in keeping with the CSM Group’s capabilities, but still presented an array of challenges.

“A lot of times it’s harder to renovate such a facility than to build one from scratch,” McDonald explains. “Much of the area didn’t even have a frost wall foundation, just footings.”

The renovation was further complicated by The Foundry’s flood-prone location along Portage Creek in a neighborhood appropriately referred to as River’s Edge just outside the Kalamazoo downtown. Shortly after work began last year, part of the building had to be demolished for the Federal Emergency Management Agency to adjust its floodplain regulations, and CSM Group also had to follow the stringent rules of the Michigan Department of Environmental Quality to ensure a sustainable environment and healthy community existed around The Foundry.

Although The Foundry isn’t LEED certified, it still has sustainable features with much of the original steel recycled to new uses, and the interior asphalt crushed and used to resurface the large parking lot. A reflective roof, solar tubes and glass-frosted windows will reduce heating and cooling costs, and lighting sensors will further bite into energy bills.

“We honored the existing building, yet were able to modernize it,” says McDonald, who joined then-fledgling CSM Group in 1988 as a project engineer and has ascended the ranks while retaining an interest in the nuts and bolts, and bricks and mortars. “It’s exciting when it all comes together into something so functional and aesthetically pleasing.” 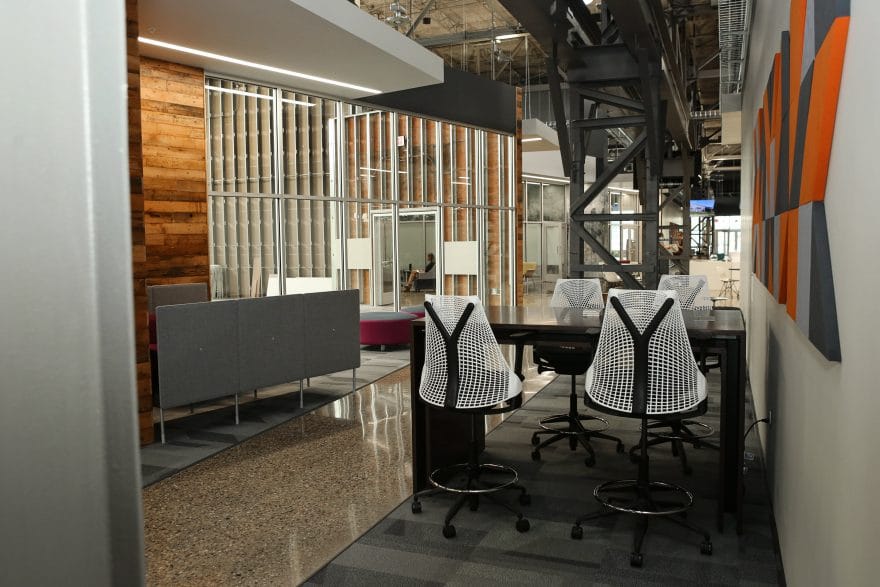 McDonald’s excitement is shared, as two more tenants are expected to set up shop in The Foundry’s large quadrants by year’s end. Another space is open, but he expects it too will be filled sooner rather than later. By the time the facility is filled, about 200 people are expected to be working on premises.

Complexities notwithstanding, The Foundry was a fairly smooth operation, with just a few delays in site preparation. McDonald gives much credit to Treystar, with whom CSM Group has often collaborated. A prior project, the 2015 Kalamazoo Valley Community College Healthy Living Campus, was valuable preparation for The Foundry, as KVCC is just a half-mile away along the same creek bed and presented some of the same challenges the partners would later encounter.

Highly regarded for its work with academic institutions of all varieties, CSM Group also has provided construction management services for Western Michigan University.

More to build upon

CSM Group and Treystar are certain to keep partnering, as the construction industry is again healthy in the upper Midwest, though McDonald says builders throughout the region are vexed by a shortage of skilled tradespeople.

As board chairman of a college access network in Battle Creek just to the east of Kalamazoo, McDonald helps oversee legacy scholarships for Kellogg Community College, and advocates more funding for the kind of post-secondary training that creates opportunities for young people. He also sits on an advisory board for the Kalamazoo Regional School District (KRESA), and CSM Group supports the program by outfitting the students with appropriate personal protective equipment, such as hi-visibility shirts and vests, hard hats and safety glasses.

So CSM Group is doing its part to further progress on all fronts in Southwest Michigan. The company’s eye is on the future, but it has a deep appreciation for the region’s rich history. The preservation of The Foundry with its many sustainable features ensures new life for one of Kalamazoo’s landmarks.