Founded on early passion for construction

Many is the young person who, even after college, doesn’t know just what it is he or she wants to do. “I’ve got to find myself,” that new graduate might say.

The founder of Crestone Builders Inc. in Watertown, South Dakota, was just 16 when he found himself at a neighbor’s company, Mike Jung Construction of Aberdeen, doing what’s become a near all-consuming passion. Namely, construction.

At that age, there was a limit to what the boy could do at a construction site, but Skott recalls rapidly acquiring skills and taking on leadership roles, even as a youth. He would go on to spend many summers at the sites, picking up skills as well as validating the conviction that this would be his livelihood. 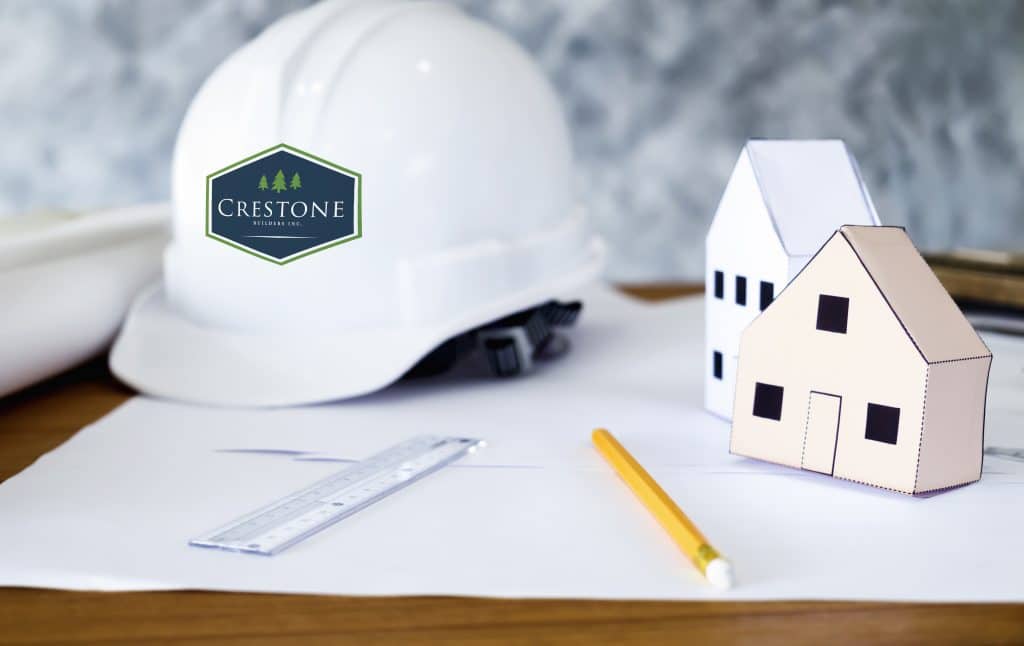 A degree in mechanical engineering from the South Dakota School of Mines and Technology added to Skott’s building credentials, but an internship in engineering was all that was necessary for him to realize that he’d rather work with his hands as well as his mind.

Settling for half as much money as he would have made on the engineering front, Skott turned to framing houses with his uncle Kurt Skott, at Custom On-Site Builders in Loveland, Colorado, before returning to eastern South Dakota and founding his own construction company.

To Skott, there’s just something about seeing a project go from discussion to blueprint to groundbreaking to grand opening.

“I just really like seeing a project come together,” the affable Skott says during a phone conversation. “Seeing a building rise from nothing … the creative aspect of it all, it’s something very special.”

Just a day at the office

If Skott has any on-the-job frustrations, it may have to do with him spending most of his time in the office—the very thing that turned him off about mechanical engineering.

But that’s one of the consequences of running a company that’s grown steadily since its founding in the summer of 2005, and has diversified from designing and building single-family homes to doing subdivisions and commercial projects, as well as overall construction management.

Crestone self-performs concrete work, carpentry, framing, trim and siding, and subs out the plumbing, electrical, drywall and sometimes the roofing. A local institution, HomeTown Building Center, provides much of the materials.

“I would say what sets us apart is our design-build process and value engineering approach,” Skott says, adding that he understands that every business has a budget and expectations. “They’ll tell us their criteria and we’ll work with them and achieve optimum value. We won’t compromise quality and craftsmanship.”

As Skott spoke, a Crestone crew was beginning foundation work for what will be a loft apartment building in Watertown. There’s a growing demand for single-bedroom rentals in this part of the state, Skott notes, explaining that this seven-unit project will include apartments with a garage on the main level, walk-up stairs to a kitchen and bathroom, and a lofted bedroom above that. 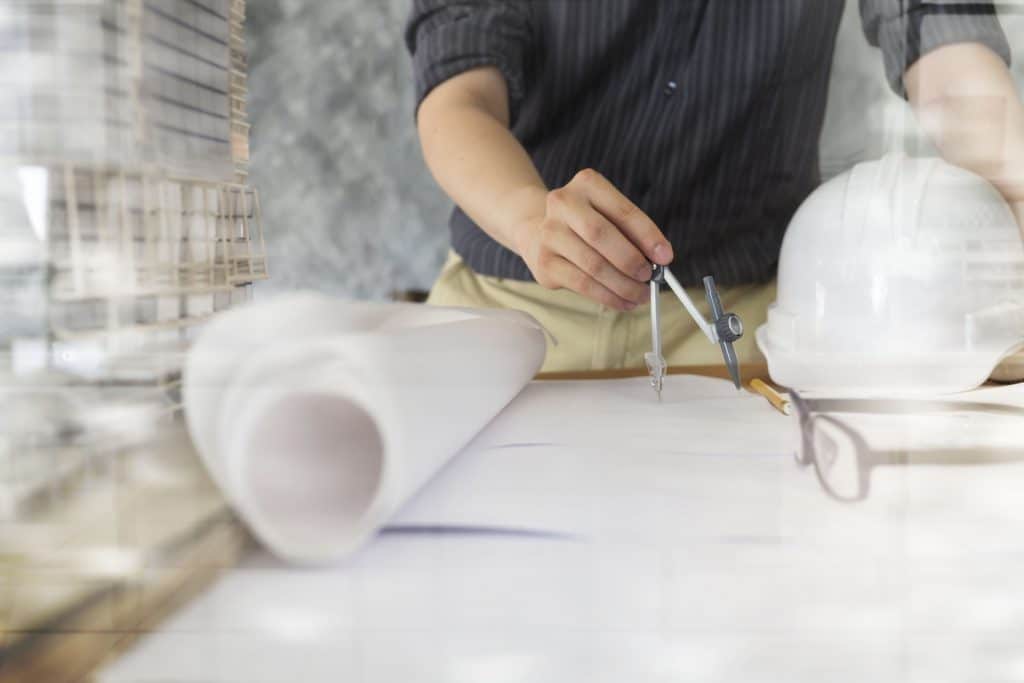 Earlier Crestone commercial work included the design, construction and remodel of the Watertown affiliate of the Sioux Valley Cooperative, which provides energy, agricultural and convenience products to farms, homes and businesses through a network of eight South Dakota locations.

“The project from start to finish was seamless as Eric maintained the build schedule for his crew and the subcontractors, which provided us an on-time completion,” Co-op CEO Jared Landmark noted.

“Based on my experience, I am confident in the ability of Crestone Builders, under the direction of Mr. Skott, to deliver a finished product within their monetary bid and timeline,” said Taco Bell franchisee Cameron Dunafon.

A move from home

Having gotten its start as a custom home designer and builder, Crestone remains active in that line of work, but has shifted more toward building entire communities and seems to be covering all demographics in the process.

The Villas at Willow Creek is marketed toward empty-nesters and retirees as well as folks and families of all ages who simply would rather not be consumed with yardwork. With low-maintenance living high among the amenities, the modestly-sized patio homes come in various single-level floor plans with handicapped accessibility and radiant floor heating. The neighborhood is conveniently close to shopping, dining and health care. A homeowners’ association governs Willow Creek, ensuring the dwellers have less upkeep. 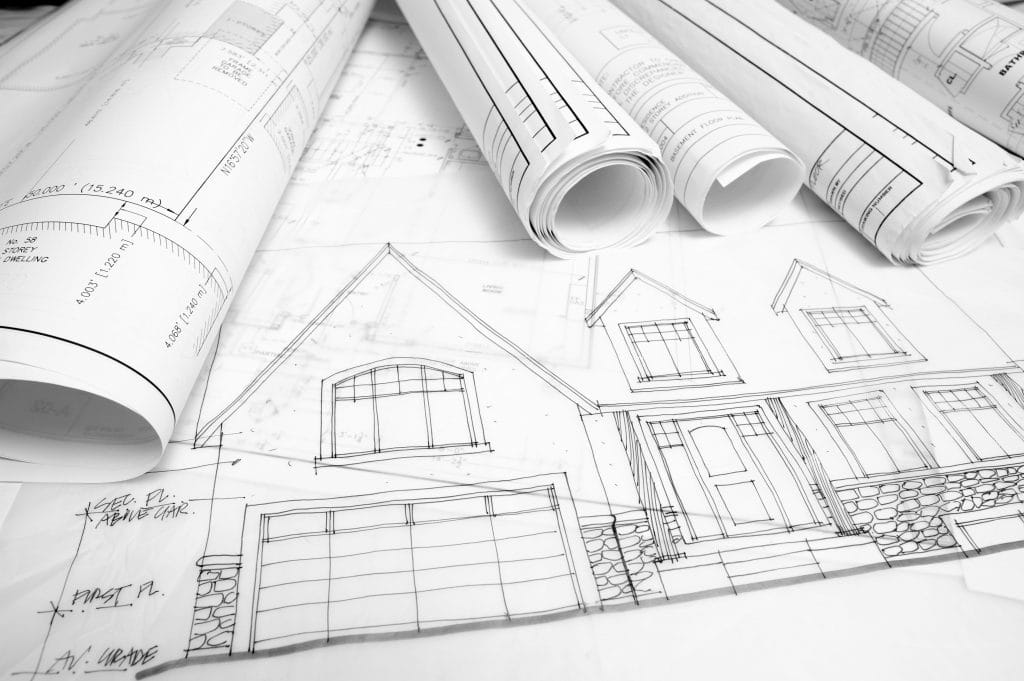 Then there’s Boulder Ridge Estates, which features high-end houses in the $300,000-plus range on lots ranging from 1.6 to 2.5 acres. Close to Lake Kampeska and Lake Pelican, two golf courses and trails for hiking and snowmobiling, the 37-lot Boulder Ridge is also governed by a homeowners’ association.

And while it may be the smallest structure Crestone has constructed, a playhouse that Skott and his team has built for a Make-A-Wish South Dakota auction is a source of great corporate pride. “Our community supports us and is the source of our success, and we are grateful to have the opportunity and the ability to give back” says Eric.

Construction, of course, begins from the bottom up, and when a builder proves its credentials there, opportunities may arise that are out of the ordinary.

Such was the case earlier this year when Crestone was contracted to preserve a modest, yet iconic house on the banks of Lake Kampeska west of Watertown. Once the residence and office of one of the region’s most prominent citizens, the late Dr. Harry J. Bartron, the house itself was not beyond repair, but its crumbling foundation threatened to send it into the lake.

With the work chronicled in YouTube segments, the house was lifted off the foundation so a Crestone crew could put down a new one. To the delight of local preservationists—including some old-timers who were Dr. Bartron’s patients during the mid-20th century—the house was put back in place this past spring.

“It was a real challenge,” says Skott. “The house figured so prominently in local history. But without a new foundation, it could have been doomed. We are proud to have done this job.”

From a general perspective, the construction industry is healthy in this part of South Dakota. North Dakota may be subject to booms and busts, depending on the state of the energy industry, but South Dakota’s economy tends to be more stable and supported by agriculture and tourism. The eastern part of the state is seeing healthy but not explosive population growth, and Skott anticipates continued progress for Crestone.

“We’ve got 20 to 25 employees at any given time,” he says. “Good people can be hard to find—it’s an industrywide problem—but each year we seem to pick up four or five real good guys. They make up a good team, one that likes to work and works well.” 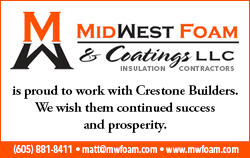