When Colorado State University Pueblo set a goal of being the state’s first net zero campus, it had more in mind than simply switching to LED lighting.

Taking advantage of its sprawling campus, the university is building a 24-acre solar farm. The project, which is part of an energy performance contract, will save the university on energy costs and create new jobs in the community. 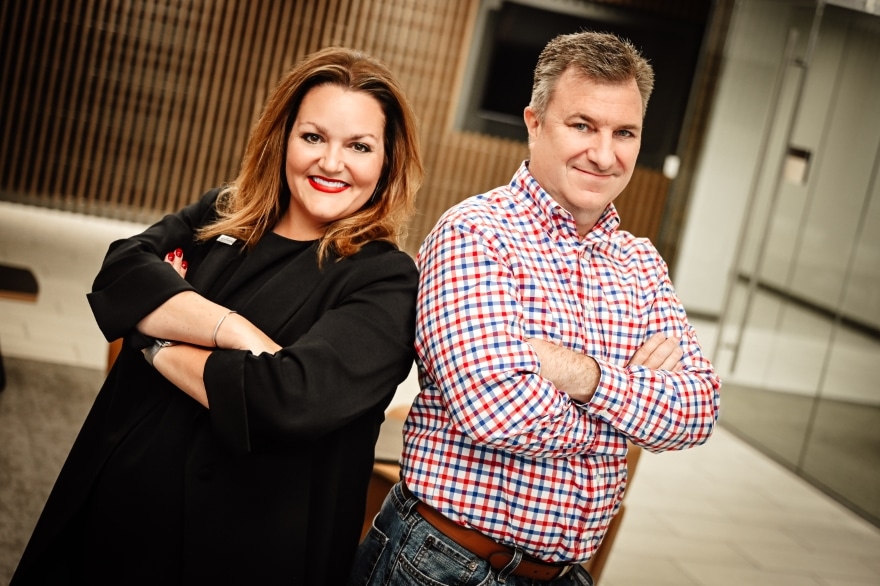 The farm is part of a plan spearheaded by Donna Souder Hodge, the vice president of operations and advancement, and Craig Cason, the director of facilities, at CSU Pueblo. The pair have been working across departments to ensure the university’s infrastructure meets the needs of the 10-year plan, “Vision 2028.”

“The solar farm is a great example of strategy and facilities working together for a long-term vision,” Cason says. “This isn’t about me and Donna. This is about the whole campus coming together to think big and boldly about the future of the university.”

CSU Pueblo is one of three universities within the Colorado State University System. The 275-acre campus serves almost 4,000 students.

Because the campus is situated on top of a hill with a lot of direct sun exposure, Cason and Souder Hodge say it’s perfectly located for a solar farm. They say sustainability “has been top of mind” for campus leaders and students for many years.

Through an energy performance contract with Johnson Controls, a global HVAC company, CSU Pueblo has locked in its energy costs for the next 20 years, which will save it an estimated $10 million.  The contract came about after the university worked with Johnson Controls on smaller projects, like LED lighting. Without the contract, Cason and Souder Hodge say the solar farm would have cost $20-$30 million to build. 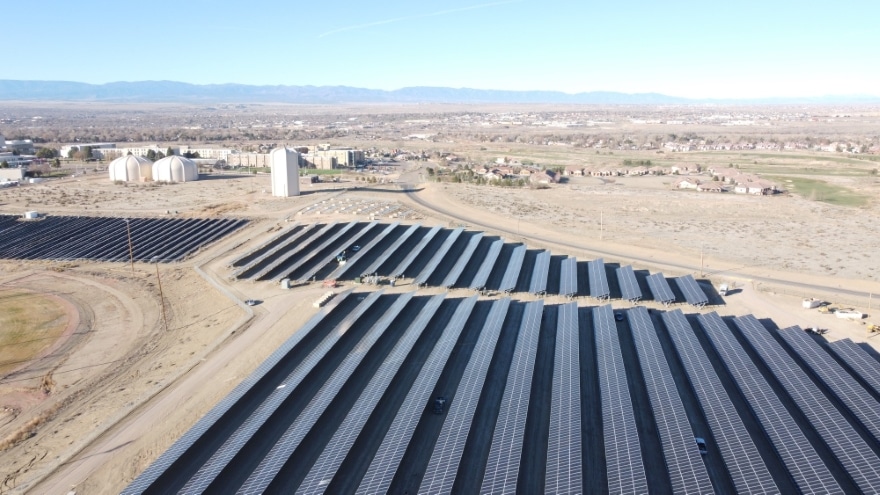 The pair say the solar farm will create more jobs in the renewable energy industry. With the local coal mine expected to close in the next 10 years, they say this will be a great benefit to the community. They say the university wants students to be well-prepared for jobs in this industry, as well.

“The big challenge for us is looking ahead at what types of jobs will be in demand in the future so we can create programs today,” Souder Hodge says.

This mindset has led to the renovation of the university’s technology building, which previously housed the nursing program, among other things. The $17 million renovation, which will start next year, was supposed to happen in a few years, but was given higher priority by the governor and state legislators.

The building, which is expected to open by fall 2023, will house teacher education, engineering and automotive programs.

“We need a facility that’s as cutting edge as the work our faculty does with our students,” Souder Hodge says.

According to Cason and Souder Hodge, the goal is for the new technology building to be on par with the new interdisciplinary building completed last year.

The new Center for Integrated Health and Human Inquiry opened in the fall of 2020 after 15 months of construction. The $16.9 million renovation required “a complete gut” renovation of the building, Cason says, and asbestos abatement. The former psychology building had housed social science and humanities departments.

The front entrance of the building was widened, with a large glass entryway added. Inside, high-tech classrooms and labs were built, with “state of the art” nursing facilities being a priority, Souder Hodge says. The building also has a wellness center and mental health facility. 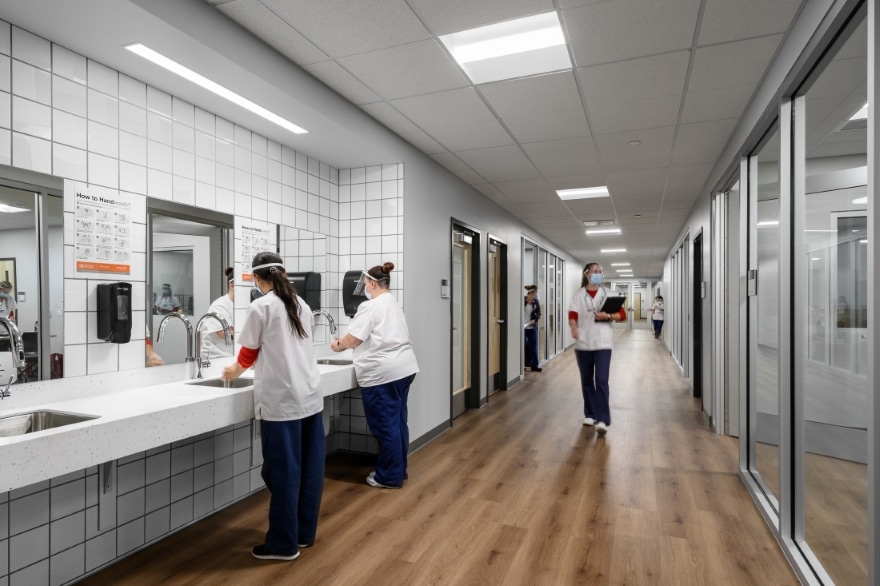 Cason and Souder Hodge say that while many students learned remotely last year because of the COVID-19 pandemic, nursing students “never faltered” and learned in person while also doing rotations at local health care facilities.

“We wanted to ensure students had the resources and space they needed,” Souder Hodge says. “We need more nurses in this area of Colorado.”

The nursing labs are separated from the other programs in the building, which Cason says was intentional so that safety can be maintained. He says he and his team always prioritize functionality and program needs over aesthetic and appearance.

“I can determine how to build something on campus, but without understanding its programmatic needs, there’s potential that it won’t be an effective space,” Cason says. “Having Donna explain a more strategic picture helps me better understand the purpose of what I’m building and how it’ll serve students.”

Cason and Souder Hodge started working on Vision 2028 together in 2018 as part of a cross-functional team.

The team began by doing a year of research and gathering input from students, faculty, staff and the community. Souder Hodge says this included “building an awareness of the physical space we have to work with.” She says it’s uncommon for the facilities staff to work so closely with strategy staff, but that it’s crucial in creating the campus they want. 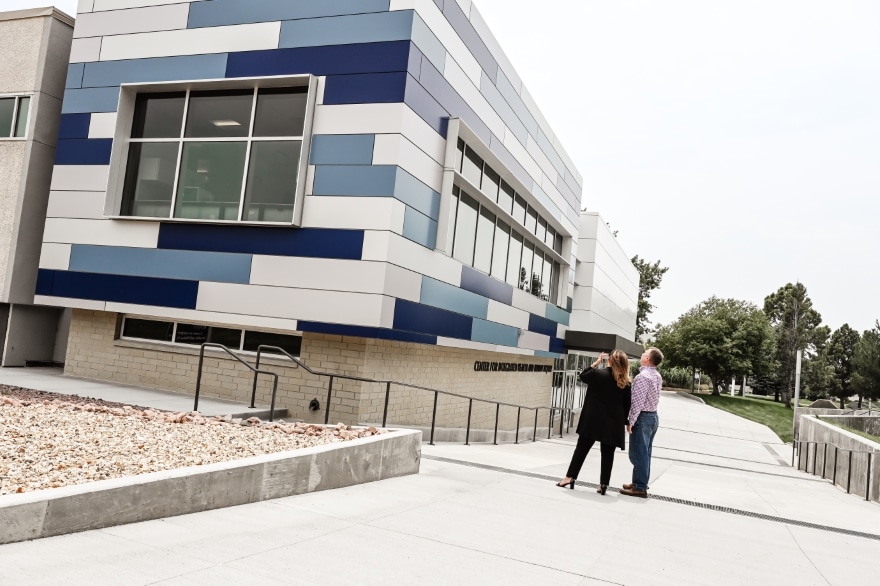 Both Cason and Souder Hodge say their collaboration is fun and rewarding, with neither of them having worked so closely with the other’s department before. Souder Hodge, who started at CSU Pueblo as a professor, has been with the university over 13 years, while Cason has been there for 17 years, with 27 years  of experience in his field.

“Craig and I sit down to imagine what the buildings will need in five years and 10 years to be as agile as students and as resilient as our campus,” Souder Hodge says. “We need to make renovations and improvements that don’t just serve our students today and tomorrow, but next year and beyond.”