Never a boundary for those thinking outside the box

Derrick C.W. Childs has his hands full—literally—on a late May day, handling an array of tools as well as a cellphone during a lively interview from a construction site in Cleveland. But that’s business as usual for this high-spirited man whose work ethic and Christian faith run deep.

And, as if heaven-sent, business is booming for Container Homes USA, the company founded by this journeyman carpenter and stone mason, and his wife Monique, just three years ago. Also a Registered Nurse, Monique is CEO and has MBE (Minority Business Enterprise) certification.

“This is the fastest growing segment of the home-building industry,” Childs says, his words taking on a rat-a-tat-tat quality as he alternates between barking out orders to his crew and describing company operations to Blueprint. “And we’ll be the first company in the U.S. that will be doing this mass production once our new manufacturing facility is built in Cleveland.” 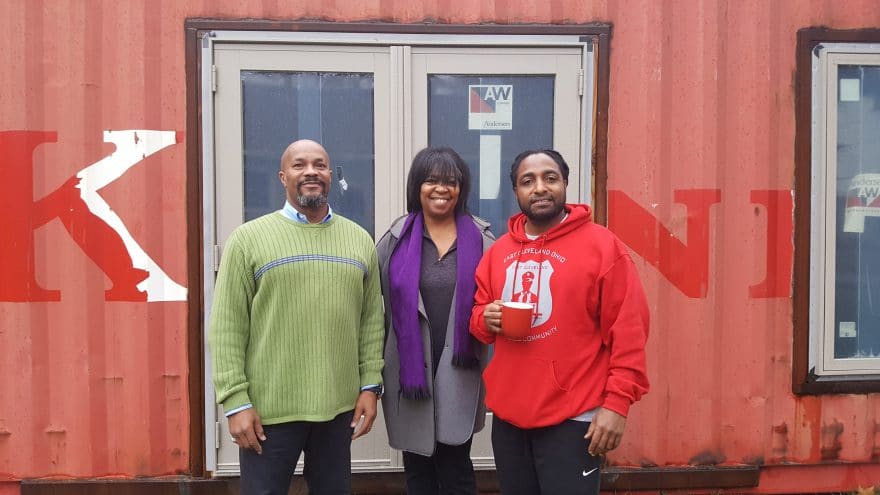 “This” being fashioning homes and other structures out of shipping containers that otherwise might be sitting vacant at ports along the Great Lakes and eastern United States—a consequence of the country importing far more goods than it exports. The economists may pontificate the ramifications of the trade deficit, but Childs sees opportunity to prosper in a socially responsible business that’s going far beyond its initial intent of providing affordable housing to veterans and people with disabilities.

Over 70 designs of residential, commercial, industrial and recreational structures are available, and there’s even a container with a solar-operated system that can purify and even desalinate 30,000 gallons of water. Childs sees his affordable structures as among the solutions that can contribute to the much-needed rebuilding of urban neighborhoods in Cleveland, Detroit and elsewhere.

Call it the kind of out-of-the-box thinking that initially inspired the man to apply his formidable trade skills toward such high-handed causes.

Given how those shipping containers have long been put to uses such as storage facilities on dry land, Childs may wonder why it took home builders so long to see the potential of the sturdy structures as practical, comfortable and even stylish domiciles. His company is modifying containers in a variety of ways, and just because the big steel boxes tend to be rectangular and 20, 40 or 53 feet in length, doesn’t mean they don’t lend themselves to creative and custom construction.

Outside and in, containers can be stylized to the most personal liking and in far less time than it would take to build a stand-alone home or commercial project.

“We can sell you one that’s 320 square feet and fully furnished for $59,000,” Childs says, explaining that even such a modest home still includes such high-quality accessories as Andersen doors and windows, Kohler bathroom fixtures and a Rinnai tankless hot-water system. “And we are already doing high-end three-bedroom, two-bathroom, single-family homes as well.”

For those who don’t need 320 square feet, there’s a 180-square foot-studio container, also fully furnished, for $25,000. At the other end, Container Homes USA is designing a 6,400-square-foot home for a player in the Canadian Football League.

The common denominators of container homes, whatever their size, are value and easy maintenance, Childs says. Already designed to withstand temperature extremes on their global trek on the seven seas or cross-country journey via the rails, containers can be further insulated with what Childs describes as his “secret liquid” that can significantly reduce heating or cooling costs.

Arguably the most cost-effective of starter homes, residential containers are also easy to expand. The PPG marine-grade exterior painting carries a 10-year guarantee, and the many headaches that vex a conventional homeowner—mold, termites and roof replacement among them—are nary a concern when someone dwells in steel.

Then there’s the environmental factor that goes far beyond the easy adaptability of energy efficiency.

Going off the deep end

The number may never be known, but those well-versed in maritime commerce conservatively estimate that a couple of thousand containers—many bound one-way for the U.S.—tumble off those huge, precariously balanced ships every year.

Loss of cargo notwithstanding, at least those are the containers that won’t clutter up U.S. ports when empty. By recycling a surplus of containers into homes and other buildings, the company wins points for environmental stewardship and that will increase as Childs nears completion for LEED Green Associate Certification.

“We’re finding new uses for these containers that otherwise would waste away at ports or in industrial graveyards,” says Childs, who maintains contacts at 18 U.S. working harbors where his company can buy the structures for anywhere from $2,000 to $6,500 depending on size. “This is green construction at its core.”

And for many people—including the Childs—just what they need. 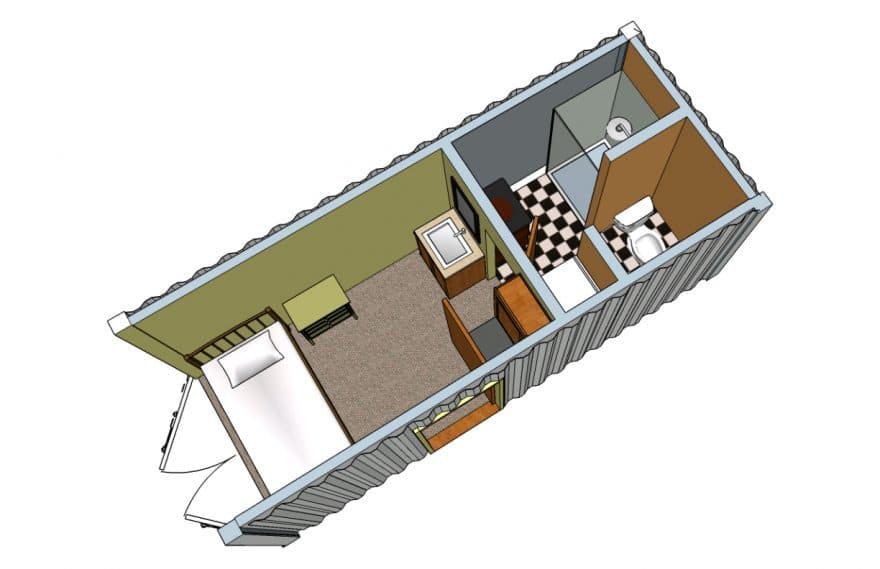 Their own dream house

It was just three years ago when Monique’s mobility was becoming more and more compromised by multiple sclerosis. Childs recalls it taking her 20 minutes to walk up the stairs at their former home, and his own physical well-being being set back in an accident.

“But the good Lord showed us our blueprint,” says Childs, quick to add that the couple’s faith complements their personal and professional lives. “We’re Christians, and we’re proud to be Christians.”

A single-level ranch-style house seemed to be the answer to their prayers, and the couple will soon be living in a 3,200-square-foot container home with ADA features. Proficient in the building trades, Childs is committed to plying his skills in this niche business, the potential for which has long gone unrecognized.

What started out as a work force of just a few men and some trusted subcontractors in Cleveland, will grow to 33 in-house people there, with more in Atlanta as the company expands in the Peach State. Southern projects there include five commercial buildings.

The company has also been contacted to build homeless shelters in New Jersey and Hawaii, in addition to what it’s done in Cleveland. Applying their own needs to those of disabled veterans, Derrick and Monique have won plaudits for their line of accessible buildings so vital for the physical and mental recoveries of wounded warriors.

“This is the perfect home concept for our veterans in need,” former Ohio state Sen. Patrick A. Sweeney said last year while touring a work site. “There are many female veterans with children who cannot find adequate housing after they come home from service. Container Homes USA is offering a solution. The company truly has a great vision.”

With the operation’s efficiency increasing, Childs says the company will soon be able to produce a home per shift daily per facility after the manufacturing facilities are completed in Cleveland and Atlanta.

“We’re getting a lot of calls from all over,” says Childs. “And the crazy part is, we haven’t even marketed ourselves. We’re already feeling an explosion and we have to deal with it. But we’re following Christ; he shows us the way.” Both Derrick and Monique credit their leaders Bishop Tony Williams and Elder Monique Williams for “Keeping us grounded in our faith and encouraging us in our walk with God at the River of Life Ministries in Euclid, Ohio.”

Credit may be due the Savior, but as Derrick and Monique Childs know: God helps those who help themselves.