A concrete approach to academic growth

Football went big time in 2019 at Liberty University as the Flames beat the Georgia Southern Eagles in the Cure Bowl on Dec. 23.

This was more than just another one of the bowl games filling the airwaves during the holidays, because it was also Liberty’s first full season in NCAA Division 1 football, a leap few schools make so successfully.

The shift from the NCAA Football Championship Subdivision also brought big changes to Liberty’s campus in Lynchburg, Virginia, as seating at Arthur L. Williams Stadium was more than doubled to 30,000 and a new field house was built. 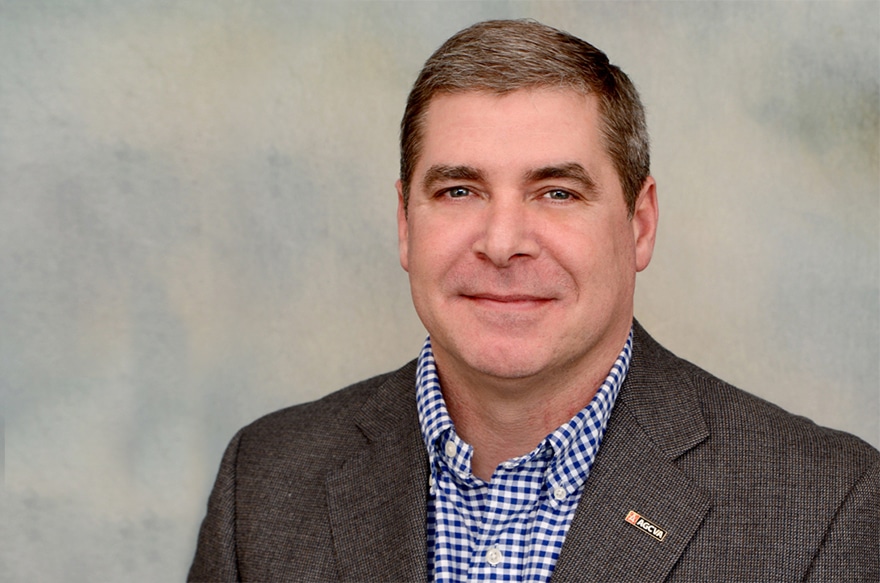 In a tradition nearly as enduring as football Saturdays in the South, Piedmont Concrete Contractors Inc. worked tirelessly to build the concrete structure for the stadium expansion. While the job is not as flashy as a long touchdown run, company President Chris Shifflett says constructing the foundations for growth at Virginia’s universities has a similar feeling and is what PCC does best.

“We’re a long-standing, established contractor in Virginia, and we’ve been doing high-profile projects since our inception,” he says. “We have skilled craftsmen and leaders in the concrete field working as a team to do complex projects safely and in a timely manner.”

Whether pouring foundations, walls, slabs at ground level or reaching skyward with the casts to support seating for thousands of fans, PCC has found ways to become a part of campus life for decades.

PCC began as a division of R. E. Lee & Son Inc., founded in 1939, and became an independent subsidiary of the R. E. Lee Companies Inc. in 1997. PCC once relied largely on performing concrete jobs for its parent company, and has since grown to become a subcontractor of choice for other select contractors, especially those building on Virginia’s college campuses. 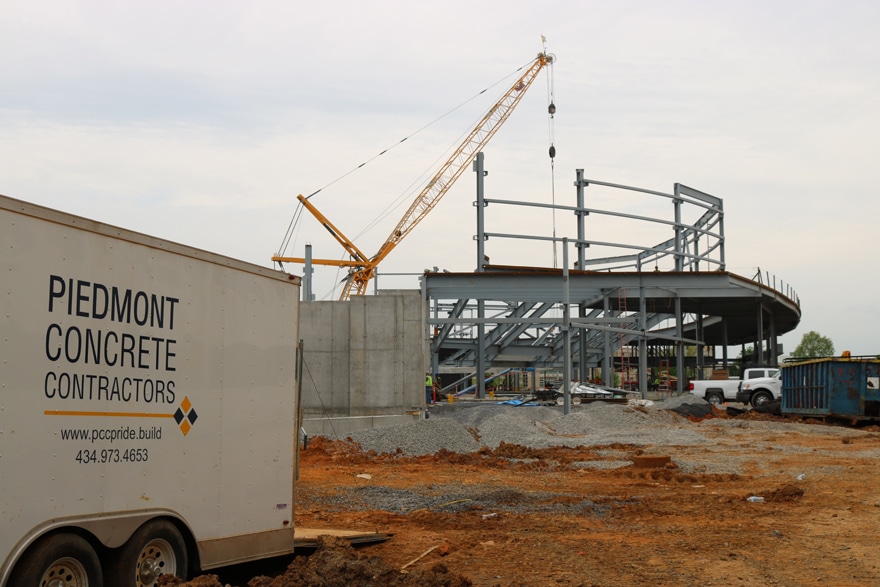 Shifflett says new forming systems, materials and processes have made the work safer and quicker over the decades, but the basics of pouring and reinforcing concrete remain as solid as the material itself.

“We work with a lot of repeat customers,” he says. “It’s our attention to safety, logistics, planning and quality standards that makes us unique. Our performance and how we meet the demands for each job as a team is our niche.”

In 2020, PCC is continuing its work at Liberty University by building a new nine-story parking garage that serves the eastern portion of the campus and will provide 2,090 parking spaces.

To the north and east of Lynchburg, at the University of Richmond, PCC is a key subcontractor for the new $15 million basketball practice and wellness center. 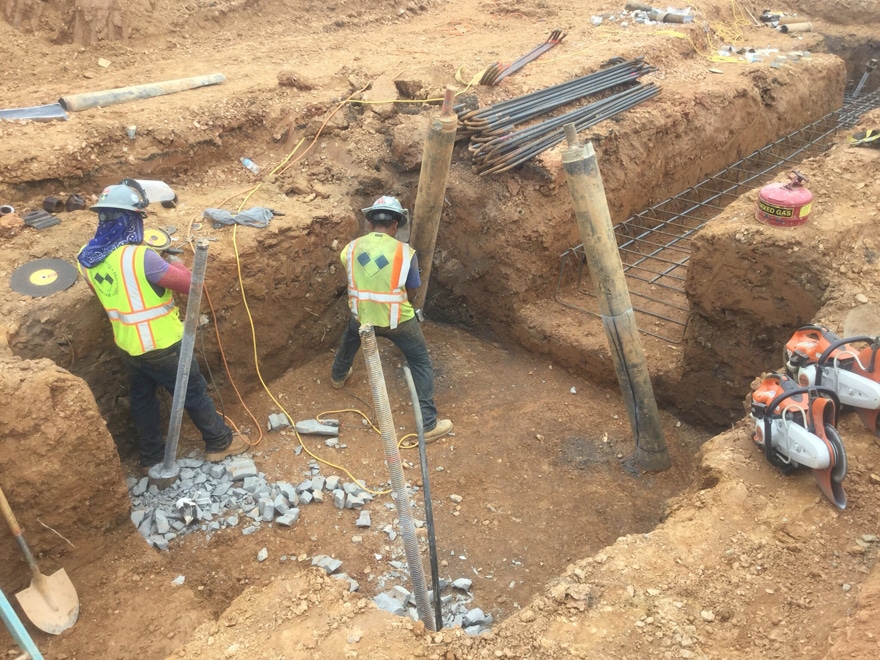 West of Richmond in Charlottesville, where PCC poured the foundations for the University of Virginia’s expanded medical center, the company is beginning its work on part of UVA’s Athletics Master Plan by installing the foundations and retaining walls for several new practice fields.

Up the road in Harrisonburg, basketball fans will attend hoops games at the Atlantic Union Bank Center in fall 2020, where PCC poured the major building foundations, retaining walls and slabs.

Complex cast-in-place structures are PCC’s specialty, but Shifflett says the work is more than just forming and placing concrete, as the company also works with and around other trades to accomplish tight deadlines in demanding settings.

For instance, at the expanded Williams Stadium at Liberty University, an already compressed project schedule got tighter when school officials decided they wanted the new seating ready for spring commencement, months ahead of the upcoming football season. 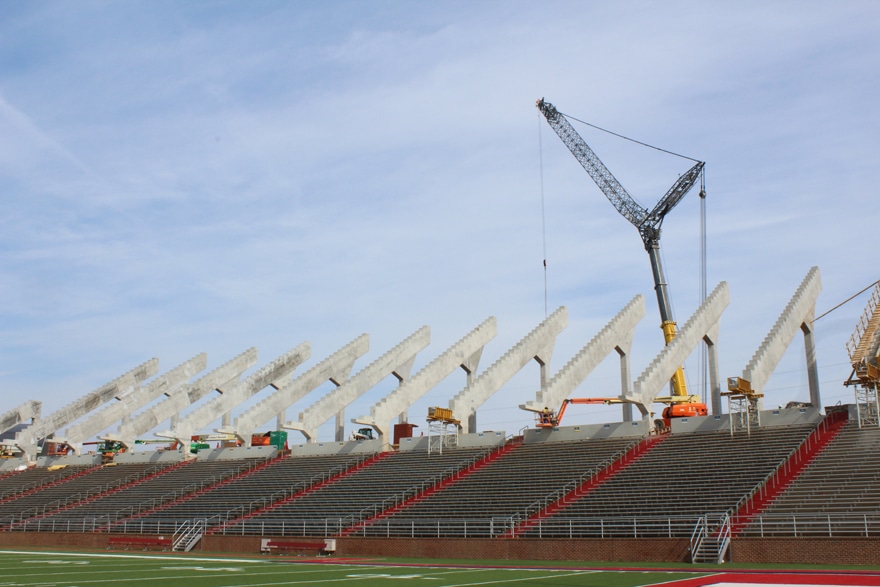 “The work is consistent, there are no real down times, but bad weather can set us back,” Shifflett says. “Also, we have to be very aware of the student population and people in the vicinity of construction projects and avoid being disruptive to campus life as much as possible.”

Because concrete mixes do not travel well, PCC develops relationships with local cement companies to keep the product coming to projects as required, Shifflett notes.

While the buildings and stadiums continue to rise, so does PCC’s recognition. The company is certified by the Commonwealth of Virginia as a SWaM or Small, Women-owned, and Minority-owned Business. Its safety standards and training have earned it a place in the Virginia Building Excellence in Safety, Health and Training, or BEST, program established by the Virginia Occupational Safety and Health Administration.

The BEST Level 1 designation is the first awarded to a subcontractor in Virginia, Shifflett says, and embodies the company’s dedication to safety including a fulltime safety director with two assistants. 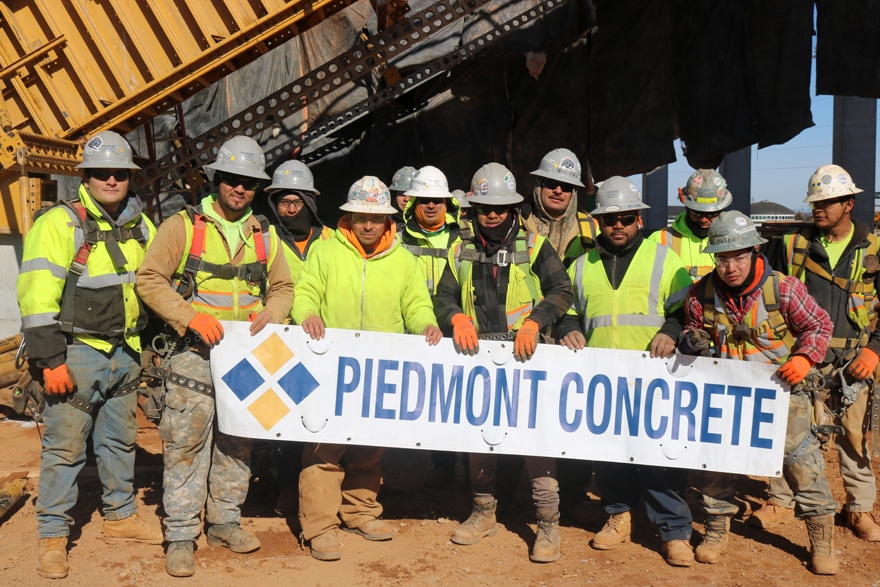 “This is of a very high value to our company,” Shifflett says. “We can meet demanding schedules, and we do it safely.”

The program is now just concentrating on the core skillset needed for the construction industry but will grow to include training for specific certifications in concrete, finish carpentry and framing and drywall.

“This construction industry will be more and more competitive,” Shifflett explains. “The price of construction will continue to rise, mostly due to the limited supply of qualified contractors. We’re seeing an increase in the amount of work available and there are fewer qualified people to do it.”

Born in Orange County, Virginia, to north and east of Charlottesville, Shifflett attended both Piedmont Virginia Community College and Ferrum College. On breaks and between semesters, he worked with his father a superintendent for R. E. Lee & Son. After working as a structural steel draftsman for the Liphart Steel Company in Richmond, he returned to R. E. Lee & Son in 1995 as a project manager.

Shifflett was named president of Lee’s Piedmont Plaster & Drywall subsidiary in 2007 and president of PCC in 2012. The dual responsibilities give him a fuller sense of how Piedmont has evolved over the years, but also how it has not strayed from its roots.

“This remains a family-owned company where we try to have long-term relationships with people who are working with us,” he says. “As for me, I have always enjoyed the challenges of construction and coming together to accomplish a common goal.” 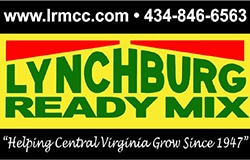