Practicing patience and perseverance in a pandemic

It was shaping up as a Spring Break like any other at Duke University in March 2020. With most students gone for the week, the facilities staff was preparing to spruce up the popular Wilson Recreation Center, readying it for the end of the semester. 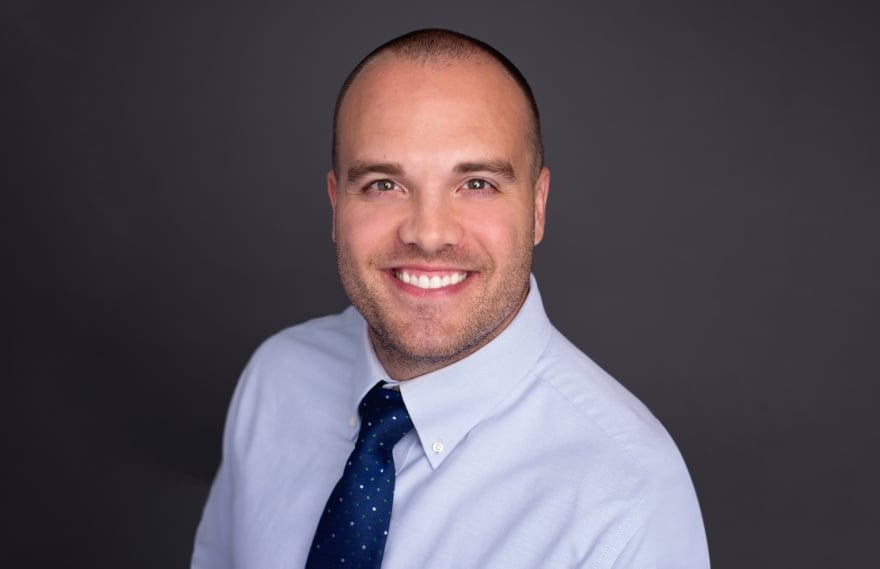 As Chris Policastro recalls, the plan was for a detailed cleaning, some touch-up painting, and setting out new lobby furniture. His team wrapped things up quickly and returned to open the building the next day.

It would only be open for a day.

Within hours, staff learned that the Durham, North Carolina, campus would close due to COVID-19. Nobody understood the severity of the situation then—most were thinking they were about to enjoy an impromptu three-week mini-vacation that would actually extend for months.

“The university remained closed for the entire summer—and then we all were faced with the overwhelming task of figuring out how to open the campus back up to 15,000 students,” recalls Policastro, the school’s director of recreation facilities. “This was territory we never encountered before.”

For Policastro, the summer of 2020 quickly became a blur.

He spent his days comparing notes with facilities managers at other universities on the best ways to deal with the crisis. He also stayed busy connecting with North Carolina health officials and reading up on the latest U.S. Centers for Disease Control and Prevention guidelines. 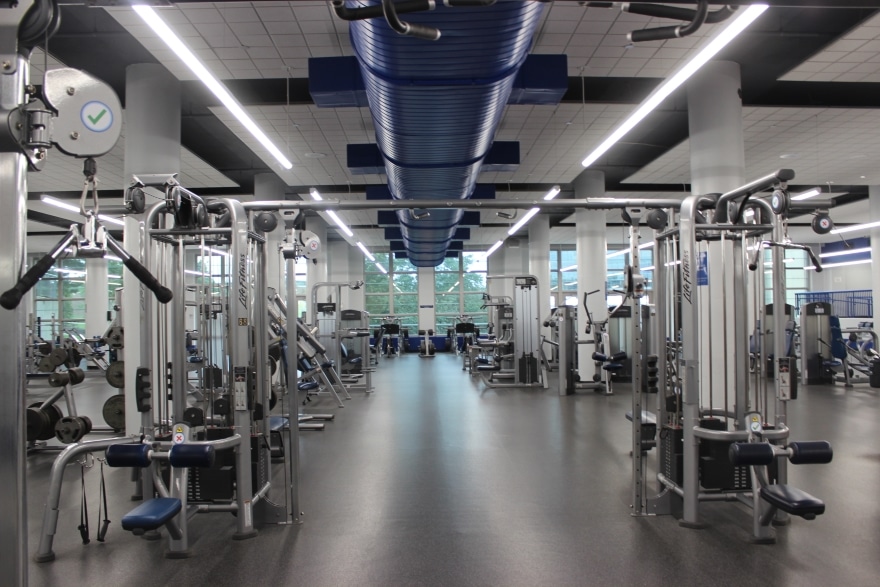 But with fewer people to work at the rec facilities—Duke furloughed all part-time employees—Policastro’s remaining staff of 25 had to take on additional responsibilities, such as learning how to operate scheduling software and scrubbing down equipment.

“People were understandably nervous and apprehensive of all the changes, but as time progressed the situation brought us closer together in ways we had not seen before,” Policastro says. “The takeaway is that this made us much stronger.”

While Wilson Recreational Center, the larger of Duke’s two recreational centers, stayed open, its sister facility, Brodie, was closed and converted into a COVID-19 testing site.

“We worked day and night and by July we were trying to put a plan into place about what the fall semester might look like,” Policastro shared. “It was an arduous task.”

With his background in fitness, Policastro knew that exercise would be crucial to maintain student health and well-being during the pandemic, so he and staff worked to keep the rec center open. Because of safeguards, he says there were no outbreaks linked to the facility, which stayed open all year. 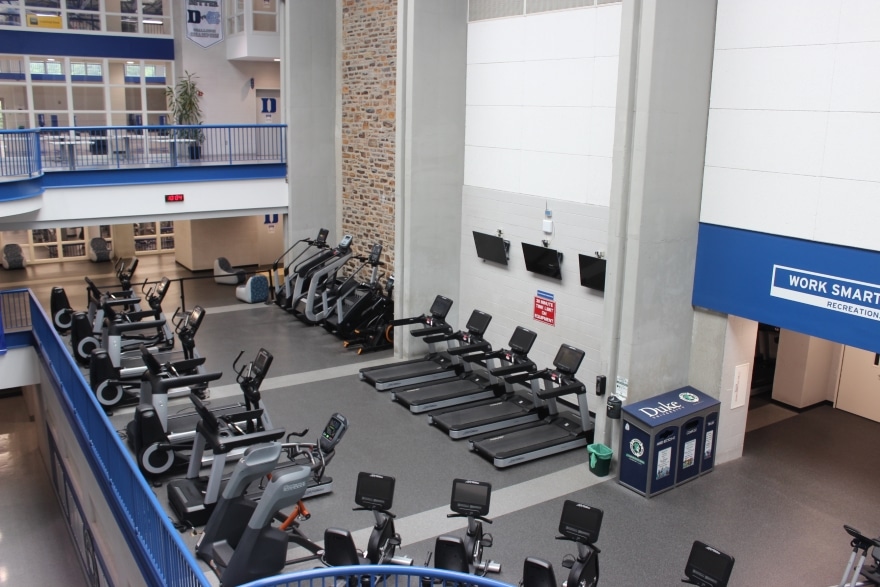 To safeguard students during the first wave of COVID-19, Policastro by used an online reservation system to allow members to get into the rec building. Other projects included relocating equipment to allow for more social distancing, increased disinfecting and wearing masks. He also posted signage of all new rules, including where people could safely go in the building.

“We were conservative, but it was worth it,” Policastro says. “Our students didn’t get sick. That says it all.”

Like many colleges and universities, Duke scrambled to figure out how to safely re-open again in fall 2020.

In August, the school decided to only allow first-year undergraduates to live on campus, capping the number of students at about 3,000.

Now, nearly a year later, with pandemic restrictions all but lifted, Policastro is focused on getting the campus’ recreational facilities back up and running—while maintaining certain precautions such as a capacity tracker in all available areas of the facility, updating cleaning protocols and maintaining social distancing requirements. 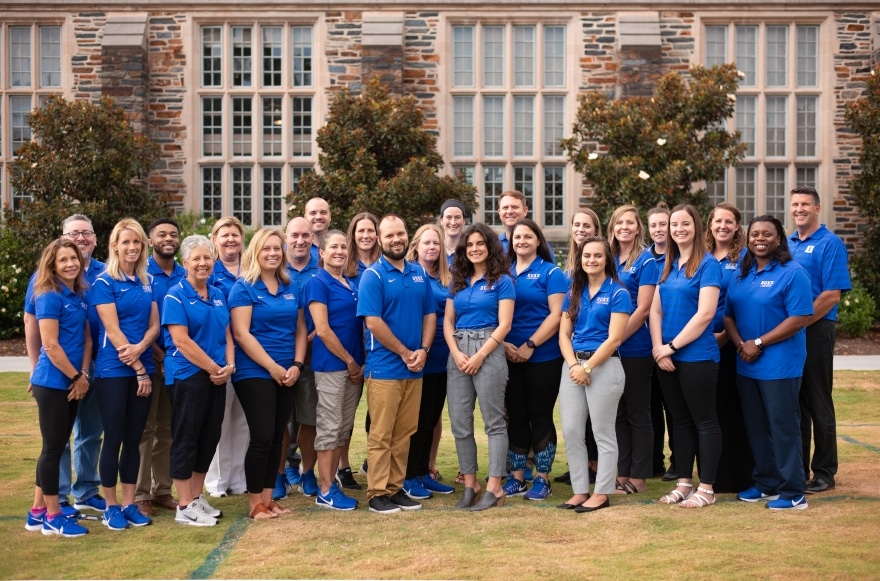 In addition, he’s working closely with the housekeeping team to establish protocols for properly disinfecting spaces, such as using the Clorox 360 fog equipment. For the upcoming fall semester, he’s also figuring out capacity limits within the buildings, calculating how many can use the cardio areas at one time, and use of the basketball courts and multi-purpose rooms.

“We’re in good position now,” Policastro says. “We are looking forward to bringing people back and are interviewing students and non-students for jobs. By the end of this summer, we’ll be fully re-opened.”

Policastro, for one, can’t wait to get back into pre-pandemic action. Relocating to Duke from New York City in 2018, he says it felt like he was just getting started with new projects when the pandemic hit.

After earning a degree in exercise physiology from West Virginia University in 2007—followed by a master’s in sport and athletic administration from West Chester University of Pennsylvania in 2009— Policastro made a career for himself in fitness and recreation. 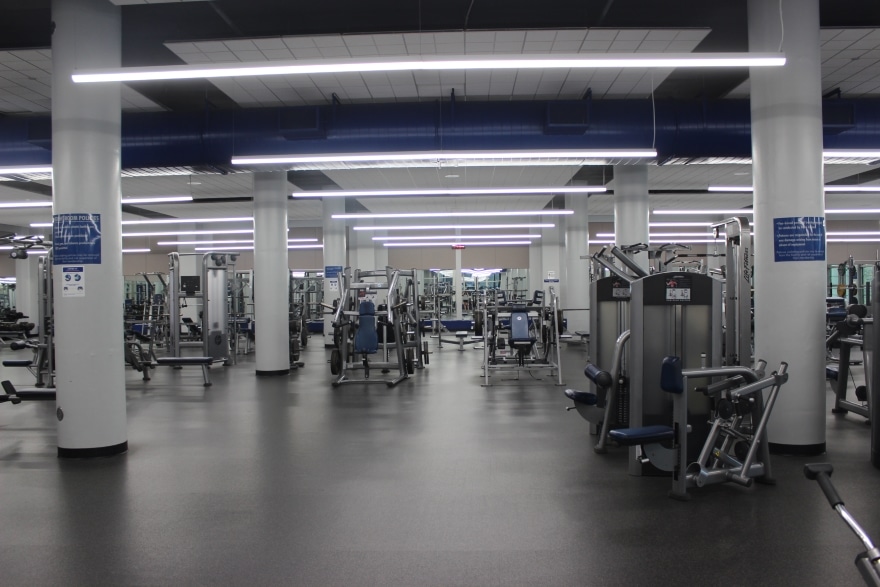 After completing a pair of internships—one in sports information at West Chester University; the other in facilities at Villanova—his first job was assistant director of fitness and wellness at the University of Pennsylvania in 2010.

In 2014, he moved to New York for his first directorship of fitness, wellness and recreation at Manhattan College. The following year, he was named an adjunct professor, teaching a stress management course within the department of kinesiology.

When he and his wife Stephanie started a family (they now have two young daughters, Emerson and Loren) it soon became apparent that it was time to move out of the city. As he recalls, “I found the posting at Duke, knew it was a great institution.”

Although he’s been at Duke for just three years, Policastro says his time there—particularly during the pandemic—has taught him much.

“Working in higher education and adapting to a schedule under these circumstances forced us to be patient and look out for the health and wellbeing of each other,” Policastro says. 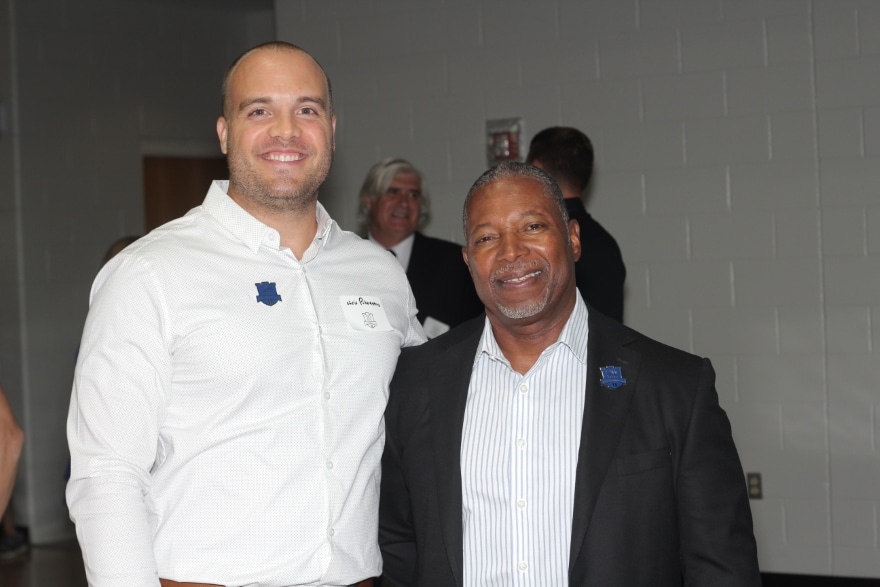 He adds his work was made easier with support from his mentor and boss, Mike Howard, who taught him about leadership and ways to motivate others in a time of crisis.

“He was forever saying ‘we got this,’ or ‘we can make this happen,’” Policastro says. “He was an integral part of my support system which allowed me to stay calm.”

Of course, having a tight-knit community of staff and students at Duke also built resolve.

“We knew that no matter what came our way, we could adapt, protect each other and get things done,” Policastro says. “This situation taught me to cherish my life outside of work, but also the relationships I’ve developed on the job. There’s not too many places like this where you can say something like that.” 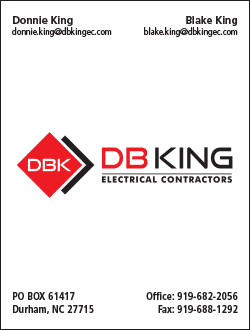