How suite it can be in East Nashville

For many professionals, especially the young up-and-comers who so drive the hi-tech, innovative and creative economies, inspiration may not easily spring up among the bland office cubicles where Dilbert is doomed to toil.

Co-working spaces may better nurture that all-important start-up feel and foster a sense of community. Then again, traditional offices still serve a purpose, as there are times one needs privacy to fully and solely concentrate on the project at hand. 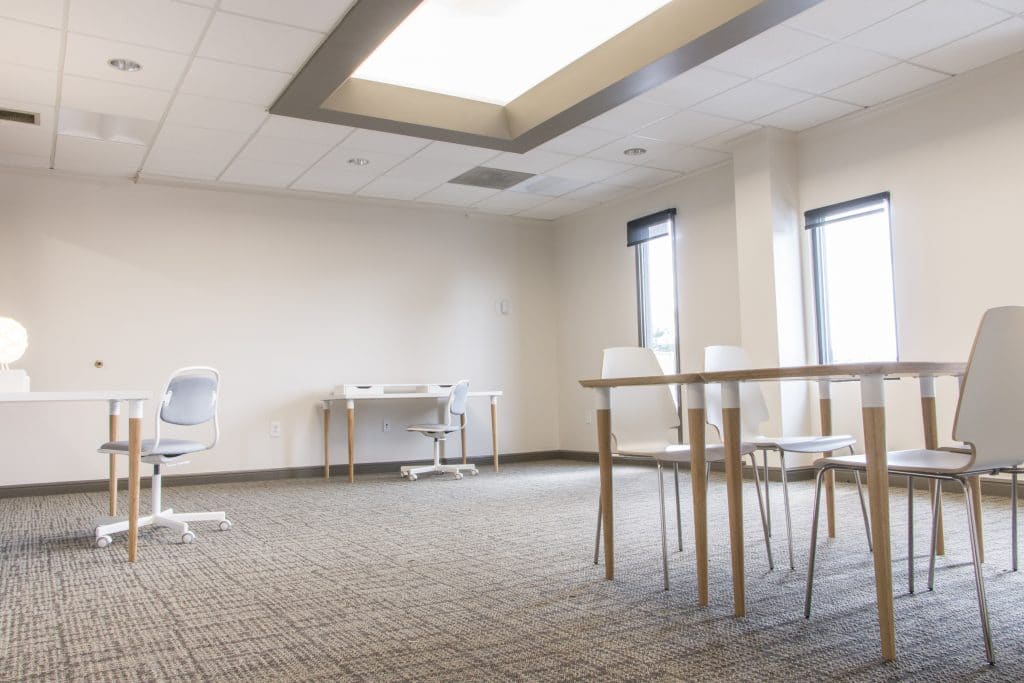 Hence the happy medium, a resourceful environment in which the budding entrepreneur can interact or simply hunker down as needed. All the better if the workspace comes with, among other perks, a flexible lease, liberty to expand or downsize, event spaces, video-production facilities, free parking, Wi-Fi, fitness rooms, showers and coffee and tea service.

It’s a real bonus if all of this happens in a trendy locale like East Nashville, where a company called C615 offers just such a workplace.

Known as Center 615, the three-building campus across the Cumberland River from Music City’s downtown is where founder Christian Paro says one can create, connect and collaborate.

And it just sort of happened by accident; a happy one for an enterprising young man who knew he was on to something not too many years ago, but wasn’t sure just what.

A native New Yorker with a degree in journalism, Paro instead opted for the real estate business in and around Tennessee’s capital during the mid-2000s.

Originally investing in single-family houses, Paro transitioned to commercial investments. Having not been too leveraged during the Great Recession that had other developers reeling, he was able to buy a three-floor, 9,000 square-foot building at 625 Main St., a part of town bustling with the kind of eclectic, artsy vibe so appealing to the innovators of today and tomorrow. Kind of like a smaller-scale Seattle or Portland, but without the cloud cover.

“I wanted to invest in real estate on Main Street, but didn’t know what to do with the building,” the 38-year-old Paro remembers during a mid-June phone conversation. “My realtor suggested that since it was office space, I rent out rooms with flexible terms. Then I read about co-working around 2011 and really ran with it.” 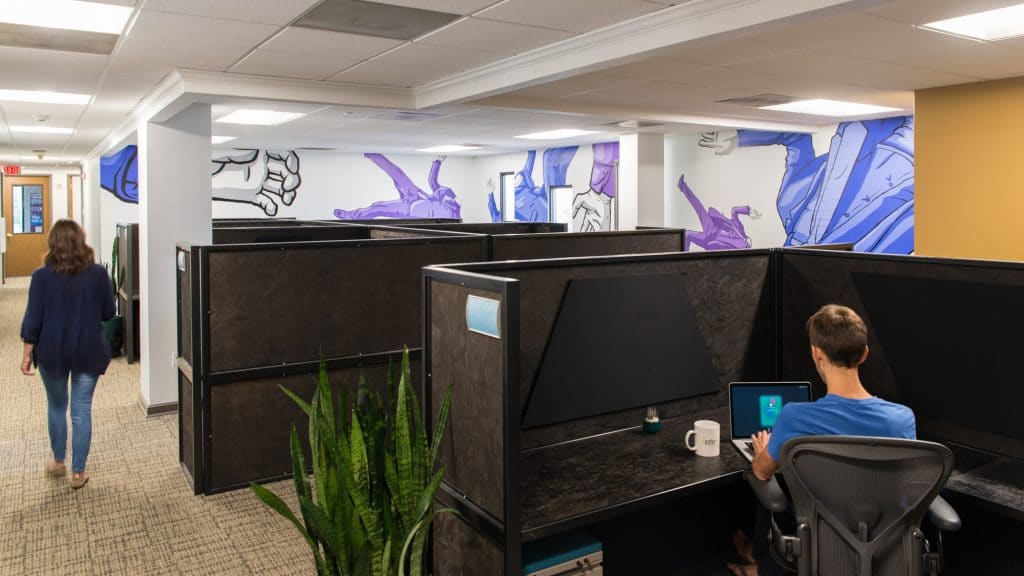 A fairly new concept in Nashville, other developers may since have wondered why they hadn’t pursued it with such vigor. Paro and a team that’s since grown to six, renovated the building, creating a break room, 12 office suites and event space.

Half the space filled up soon after 625 Main St. opened for business and by early 2012, there was such a robust waiting list that Paro bought a much bigger building—43,000 square feet—next door, and then the third across the street.

“We’re about 85 percent occupied,” says Paro, adding that the campus might be at full occupancy save for the fact that the major tenant in the largest building—the original owner—moved out last September. “We renovated that 21,000-square-foot wing over the next few months, opened in January and created more suites, and it takes longer to fill them. But we will.”

Such a work environment especially attracts the young creative and hi-tech types, says Paro, quick to add that diversity is most welcome, with other tenants including clothing designers, lawyers, writers and arborists.

They’ll have all the more reason to come aboard, he says, once further amenities take root. When Paro spoke to Blueprint, work was underway for a courtyard that will include a putting green, shuffleboard, lounge seating and outdoor meeting space, all of which should be complete when Nashville’s pleasant autumn months roll around.

Keeping the members satisfied is an ongoing project, Paro reminds, adding that he’s constantly looking to them and his staff for new ideas, one of which led to the 17,000-square-foot Studio 615 video production area and its LED Cyc studio, spacious photographer’s playground, modern green rooms and warehouse space. 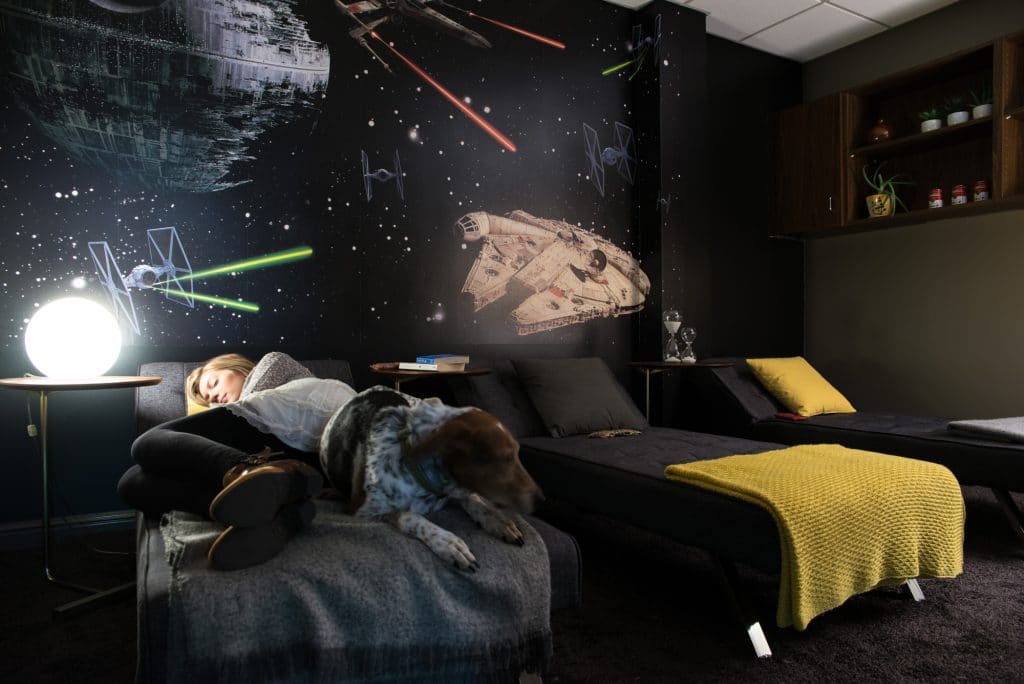 His business sensibility is augmented by a young, multicultural team that he never micromanages. Paro often travels to other co-working hot spots from Atlanta to Amsterdam to keep tabs on culture. Work and play hard, Paro advises, although his staff never seems to need such reminding.

Operations director Whitney Yeldell, who takes on many of Paro’s duties when he’s away, is said to be Beyoncé-influenced and tea-powered. In charge of building operations, Brandon Benson is not to be confused with musician Brandan Benson, but he too can do justice to a guitar. Self-taught photographer Grace Woodie is the visual media maven and a part-time realtor. They’re all ably assisted by community assistant Autumn Hogin, the newest hire. Johnathan Jones keeps the spacious Studio 615 humming, with engineer Kyle Copeland helping with sound, lighting and rigging.

They’re the kind of young people helping to sustain “East Nasty’s” reputation as Music City’s hippest neighborhood. Many of Nashville’s main attractions—the Country Music Hall of Fame, the Ryman Auditorium, the high-rise hotels—are on the other side of the Cumberland River. They’re all well worth patronizing, but there’s another zeitgeist east of the Cumberland that needs to be experienced for one to get a complete picture of Tennessee’s famous capital. Center 615 is one of that neighborhood’s new attractions, where Paro’s three Cs of connecting, creativity and collaboration thrive.

“We work hard to establish a culture at Center 615, a culture that facilitates growth,” Paro says. “Most of our members are on a one-year lease, but if a company grows or shrinks, they can break their lease and move into another suite. That happens quite frequently around here. We can grow or shrink with the individual client, and most are growing.”

Dilbert would surely be envious. But there’s no leaving cartoonland for East Nashville. If so, the funny pages might be very empty. 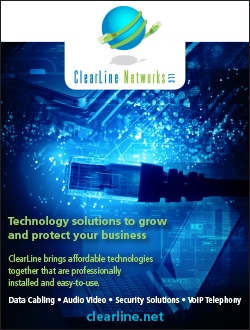 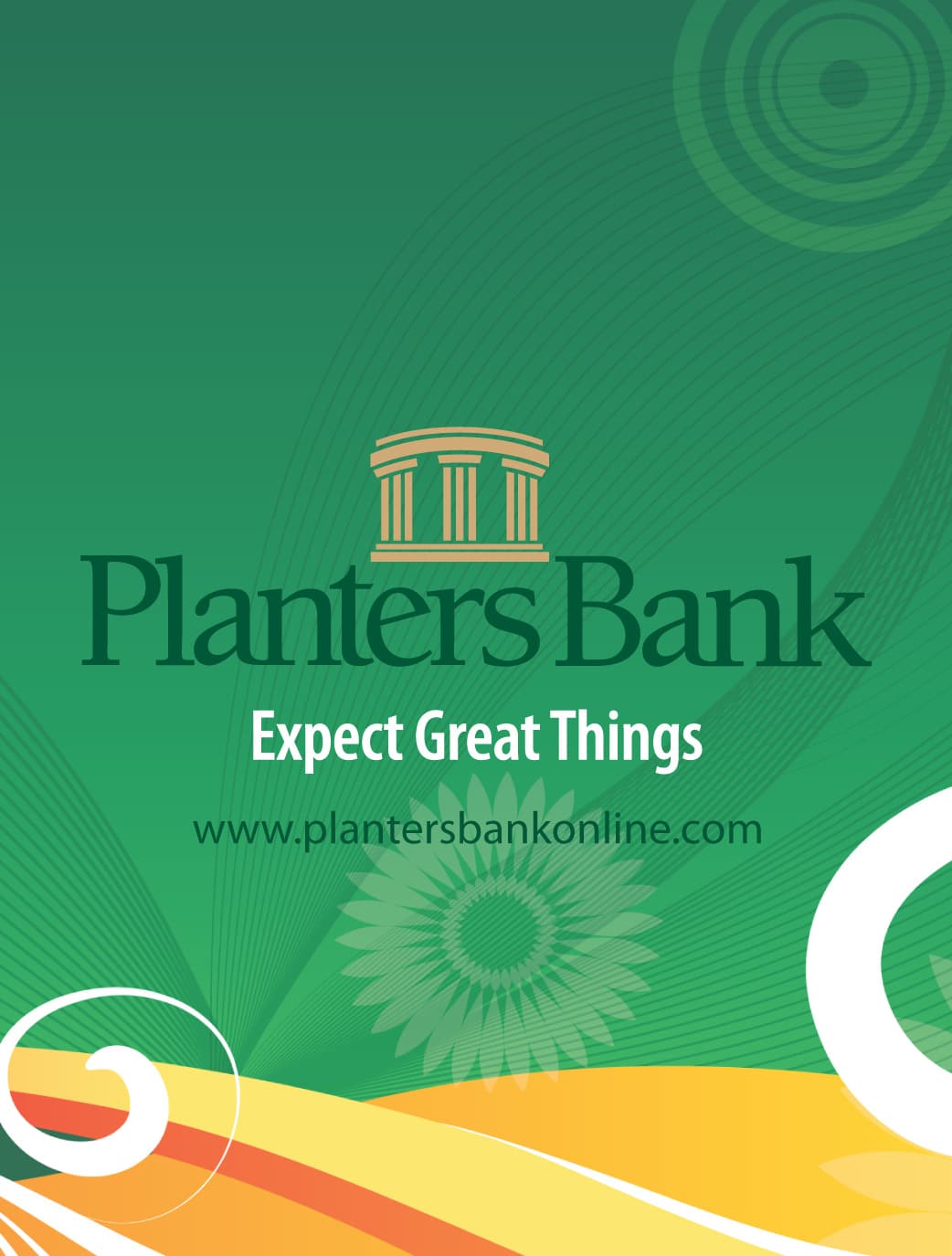