One of the worst things a pet owner can experience is having to bring their sick or injured animal to an emergency veterinary hospital.

Waiting anxiously in the lobby while their beloved pet is taken behind closed doors; worrying how the pet is reacting to strangers and other animals: it’s a situation ripe for stress.

“Hopefully you’ll never have to go to one of our emergency hospitals, but if you do, we want it to be a good experience,” says Ashley Shoults, VEG’s director of design. 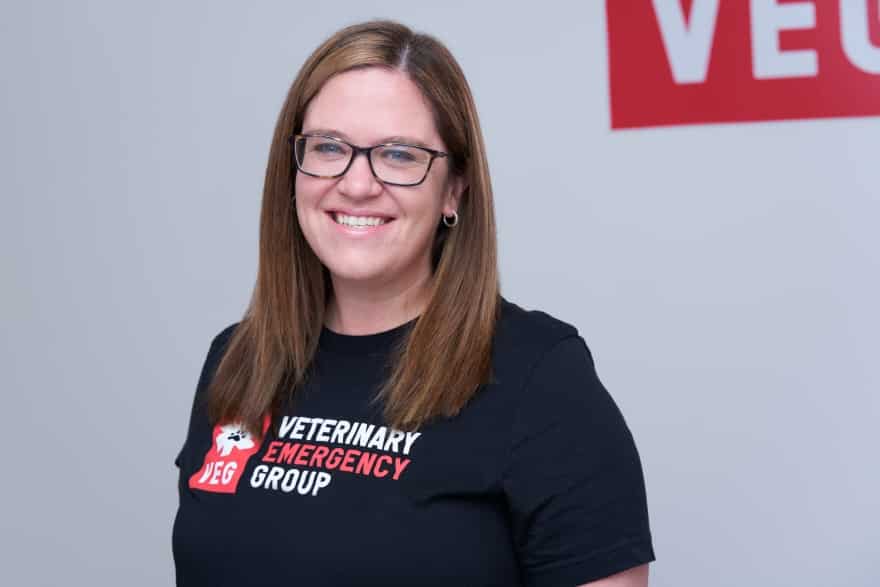 The company, which has over 30 locations across the country, uses an open-concept design so pets and their owners are never separated. This setup not only makes pets feel safer; it gives the owners more peace of mind.

These treatment areas feature large, open-concept designs with multiple treatment tables, so owners can see everything that’s happening—and easily communicate with the veterinarian. In addition, Shoults says, pets can see where unfamiliar sounds or smells are coming from, which helps reduce anxiety.

Lining the perimeter of the open treatment areas are several private rooms, which are used to treat especially anxious animals—or to have hard conversations about a pet’s prognosis. But having the middle area open allows owners to talk with and support one another, which Shoults says has been especially helpful for people making difficult decisions.

“The openness fosters togetherness,” she says. “Having all areas be customer facing is more transparent and makes everyone feel more comfortable in a stressful situation.”

While VEG locations incorporate many of the same designs and styles (most buildings are 5,000-6,000 square feet), Shoults says the unique size and layout of each building can require adjustments. For example, the road frontage or parking lot configuration may affect where the entrance is placed.

“We want our customers and staff to be able to walk into any one of our hospitals and for it to feel familiar, no matter which location they are at,” Shoults says. “So, while each location is slightly different, we still use the same kit of parts across the board and try to make the overall flow of each hospital to be similar.”

She says working with national vendors, such as F.C. Dadson for cabinetry and countertops, and Wiedenbach Brown for lighting, helps create greater consistency and standardization.

“It allows us to stick with our chosen design elements and produce them faster,” she says.

For some design elements, it’s crucial that the right materials are used. Emergency hospitals often deal with blood and other bodily fluids, so the floors and walls must be durable and easy to clean—and sanitize. Accordingly, all dog runs and isolation rooms have built-in floor drains with sloped floors.

Shoults must also consider the mechanical design for every VEG location to help reduce or eliminate odor.

“No one wants to walk into a vet hospital that smells, so we’re designing them to ensure that doesn’t happen,” she says. “We also have isolation rooms with outside exhaust to help prevent contamination and the spread of disease.” 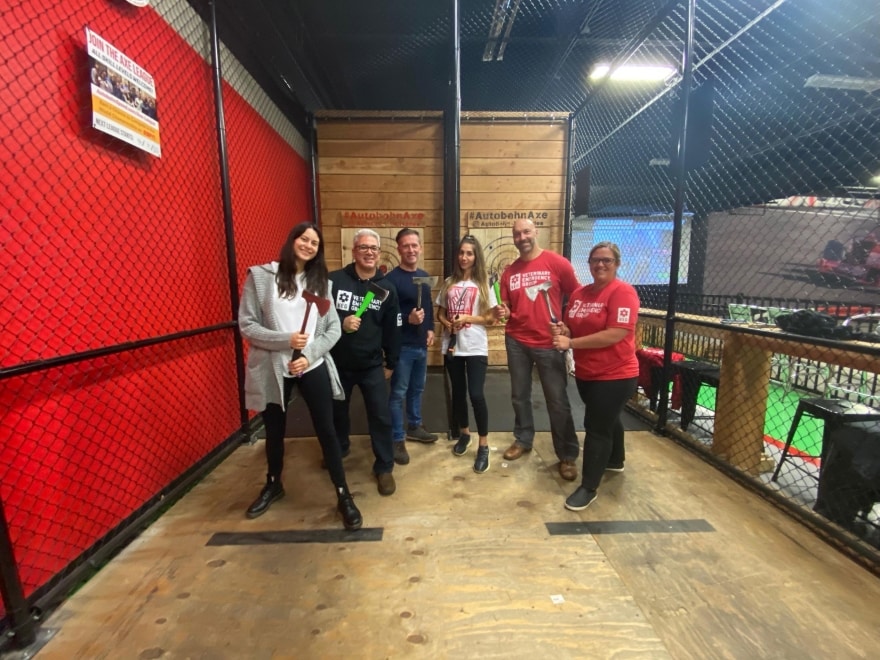 Ashley (far right) at a team building event with the VEG Design & Construction Team shortly after starting at VEG.

In addition, all VEG locations must have good “flow,” so doctors and support staff can easily move about the space. To that end, many of the treatment table set-ups are on wheels, so the design needs to accommodate their mobility.

Shoults says the vendors VEG works with understand the importance of design as well as the pace at which VEG works. In 2022, the company plans to open 15 new locations, including in new markets such as Arizona, Pennsylvania, Ohio, North Carolina and Connecticut—with more than 30 new locations scheduled to be built next year.

“You need the right partners to be able to move that quickly,” she says.

While most VEG locations are in acquired buildings, the company sometimes builds its own—and plans to do this more in the future.

“Before I joined, VEG had done mostly tenant improvement buildouts, but none of those incorporated the current VEG ideals and standards, which I was hired to help implement and to continue to evolve,” Shoults says. “Apart from recognizability, this includes accounting for the people and pets in emergency situations.”

VEG hired Shoults after she started consulting with the company in 2018 while working at a firm in Boulder, Colorado that specialized in animal care design. She was brought on board full-time last year.

Even as a consultant, Shoults says she could tell that VEG had a strong workplace culture and a positive mission of helping people and their pets. 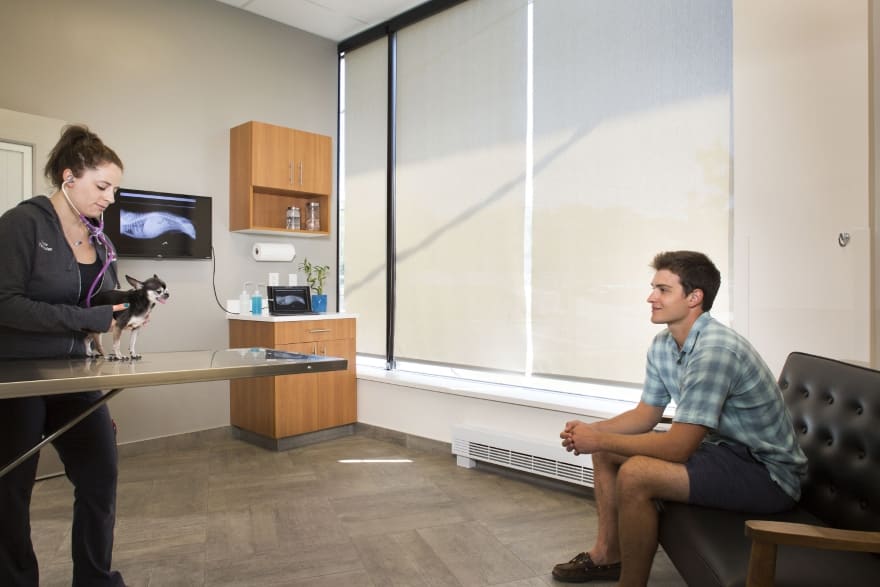 A typical exam room at a VEG hospital, this one at the White Plains, NY location. All exam rooms are around the perimeter of the main Treatment space rather than being directly off of the main lobby space | Tim Murphy | Foto Imagery

“Everything I thought I knew about the culture has proven to be true,” she says.

While she’s grateful her career has led her here, Shoults admits she never knew this path existed when she was younger. While attending the University of Colorado Boulder, where she earned a bachelor’s degree in environmental design, Shoults began working for the animal care design firm, where she stayed for nearly 16 years.

“I knew I always wanted to be an architect from a young age, but I fell into the animal care world by chance,” she says.

When she was a kid, her family had many pets, including dogs, cats, mice, hamsters and fish. Her first job as a teenager was at the local pet supply store. In hindsight, she says, it makes sense that the animal world found its way into her passion for design.

“I love knowing that what I’m designing has a greater purpose,” she says. “I’m designing spaces that help humans and their pets, as well as communities and the greater good. It’s very fulfilling work.” 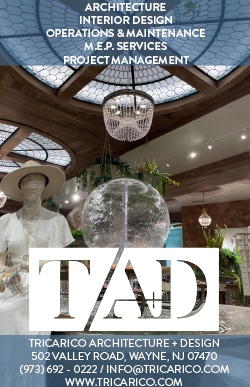