As you exit the elevator, the first thing you notice is the giant wall of living moss, so green and inviting you can’t help but picture napping in a forest.

Walk onto the main floor and you’re suddenly awash in natural light reflecting off the office’s glass doors. Along the windows, employees at light maple cubicles converse over short partitions.

If not for the logo-emblazoned moss, you might think you just walked into the headquarters of a Silicon Valley startup or an environmental nonprofit. Only, it’s Lombard, Illinois, and the logo’s letters read WM. 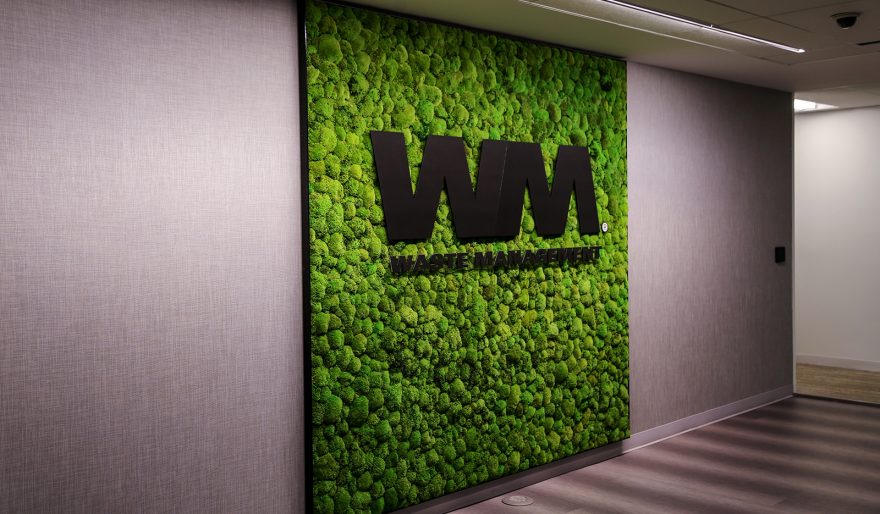 Yes, that’s Waste Management. Having long been the leader in the industry, with operations throughout North America, the company does more than just remove refuse from your driveway; it’s positioned itself in the vanguard of sustainability, all while attracting a new breed of employee—energetic, engaged and earth conscious.

“Our number one priority with our Lombard office was to create a space that looked to the future and could attract and retain top talent,” says Anne Fridrych, the company’s director of corporate real estate. “By 2025, millennials will make up 75 percent of the global work force, so we wanted an open-concept space that was driven by technology.”

Completed in October 2017, the renovation represents a watershed moment in Waste Management’s recent office design transformation, characterized by an emphasis on sustainability and a more dynamic company culture.

According to Fridrych, it was also long overdue.

Throwing out the past

“It was like being in a 1980s law firm,” Fridrych jokes, referring to the office’s previous incarnation.

With oversized offices spanning the entire window line, the hundred-plus cubicles packing the office’s interior had virtually no exposure to natural sunlight. Fluorescent panels hung overhead, and head-high partitions made it easy to, in Fridrych’s words, “not talk to anyone for months if you didn’t want to.”

Beginning in April, 2017, the entire space was demolished, gutted and consolidated, from 50,000 square feet down to 30,000. In line with new rules laid out by Financial Accounting Standards Board, stipulating that companies must realize real estate leases as liabilities on the balance sheet, the downsizing was as much an economic decision as an aesthetic one.

The first fix entailed a complete reorientation of the workspace: moving  the offices to the middle, and setting up smaller, more collaborative desks along the windows, together with three ample conference rooms, a training room and multiple “huddle rooms,” accommodating three-to-five people. The result was a flood of natural lighting, accentuated by the new glass walls surrounding the central offices.

Overhead, state-of-the-art, acoustic-grade ceiling tiles keep noise to a minimum, while an LED daylighting system automatically adjusts, based on interior occupancy and outside weather conditions.

For years, lunchtime seating was limited to a single, five-person card table in one of the copy rooms, while everyone else was forced to either queue up in the always-crowded first-floor deli, or eat at their desks. In its place is a pair of cafés, able to accommodate all 200 office employees. In addition, there is a well-stocked fresh food vending machine.

“We’re doing everything we can to say, ‘Please don’t eat at your desks,’” Fridrych says. “We encourage people to take a break from their work, get away from their screen, and mingle with people in other departments.”

To further optimize the space, Fridrych reassigned 30 of the office’s most frequent business travelers—those who spend fewer than 100 days a year in the office—to have more remote capabilities. Now, employees can reserve guest offices when needed, using software that allows this “mobile workforce” to book everything from individual cubicles to conference and training rooms.

But it’s in the office space itself, not far from the mounted moss, that you’ll find the space’s most telling feature: a wall of reclaimed wood teeming with personal headshots—some serious, some disarmingly fun and full of personality—from all nine of the corporate departments that occupy this space.

According to Fridrych, the installation embodies a strategic pillar and the best part of Waste Management: its people. Indeed, it’s an ethos you’ll find on full display at one of the company’s newest, equally innovative outposts.

Fun in the sun

Only, rather than retrofitting an existing space, Fridrych and her team chose to relocate to build-out space for a new sales center in an office building which has no shortage of natural light, all while doubling its employees from 150 to over 300.

“Phoenix has always been an incredible source of talent for us,” Fridrych says. “Phoenix has a diverse and talented workforce of individuals who we want on our team. People can come here and earn a great living, which we think fosters a mutual success story.”

The idea is simple: The more energized your salespeople, the better they’ll be at satisfying customers. In the case of Waste Management, that includes residential, commercial, municipal and industrial clients, to name a few.

Opened in January, the new location incorporates many of the elements pioneered at the company’s Illinois office, including natural lighting, an open-concept design, and a large café with ample (and comfortable) seating.

Unlike in Lombard, where the range of departments demanded a calmer, more muted feel, Phoenix puts technology front and center. That means screens; lots of them.

On each, real-time data—from missed pickups to new revenue—allows employees to track the delivery of our services in real time. Meanwhile, at the center of the office, a “leaderboard” lends a dose of healthy competition to the fast-paced rigor of sales calls.

What’s more, partitions allow the space to be converted into smaller sub-units, with conference spaces capable of accommodating anywhere from 10 to 150 people.

With 17 market area offices throughout North America, encompassing close to 45,000 Waste Management employees, the company’s makeover is far from complete.

“We’re not the same company we were 30, 20, even 10 years ago,” says Fridrych. “We want the workplace to reflect that sense of growth and transformation, because we know that’s what today’s workers and the future stars of our company are looking for.” 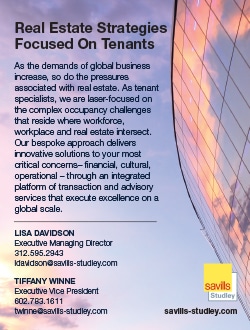 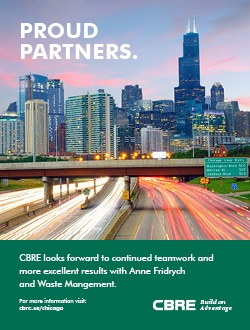 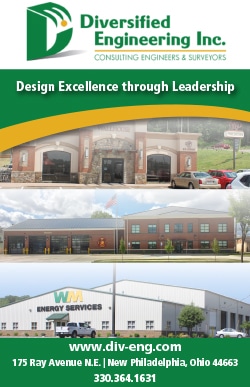 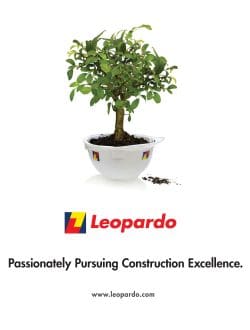 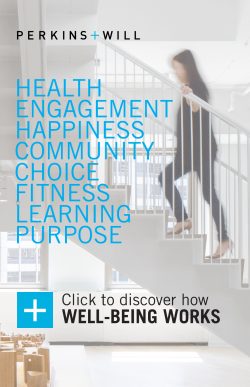