He imagined that whatever awaited him in the “real world” would be more interesting than going to Brentwood High School every day. Little did he know, he’d find his way back there 15 years later, this time by choice. 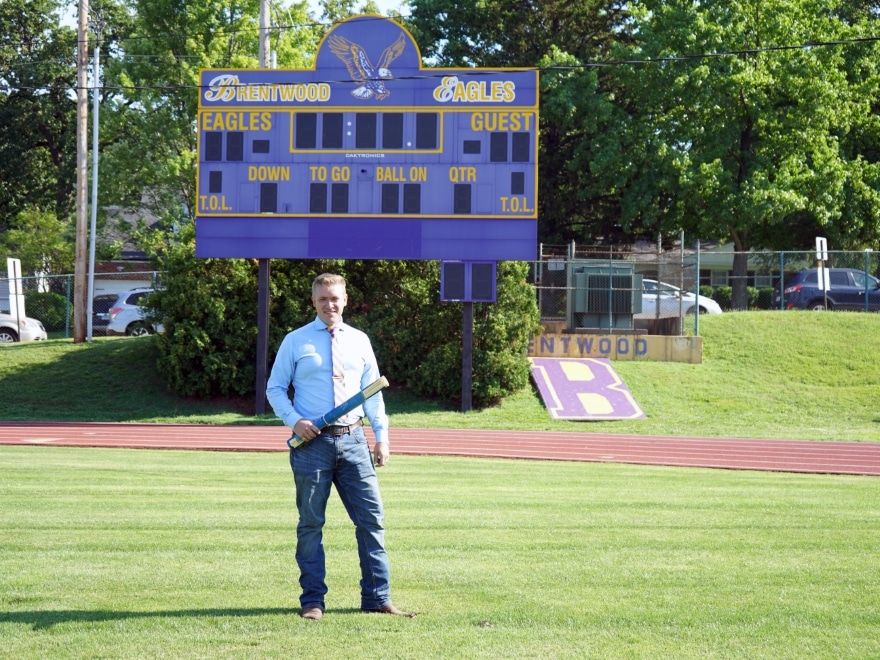 “Clamoring to come back” when he heard his alma mater was hiring, he started as the district’s director of facilities and maintenance during a huge renovation project, just prior to the onset of COVID-19. Now, despite a hectic first year and half on the job, he says there’s nowhere he’d rather be.

“I understand this district better than someone else might,” Hartnett says. “I went to school here, I still live in the neighborhood, I send my kids here and my friends’ kids go here. My heart is in this.”

Hartnett was hired in January 2020 during an $18 million renovation of the high school. He says it took him a couple months “to get up to speed,” by which point the pandemic had arrived and students began learning remotely. Having an empty building worked to Hartnett’s advantage, though, because he “didn’t need to take a classroom-to-classroom approach and instead just tore into everything all at once.”

Maintaining the historic façade of the school has been important, Hartnett says, with many structural features, such as doors, getting repaired and the original hardwood floors being restored. Modern touches, such as new furniture, have been added throughout. 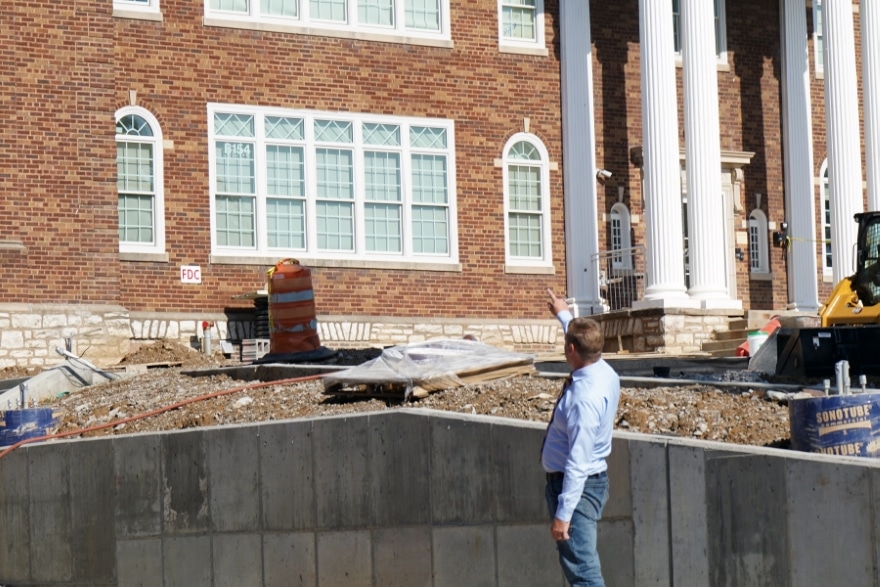 The building also got new elevators to meet Americans with Disabilities Act standards, as well as mechanical, electrical and plumbing upgrades. And to increase safety, new secured vestibules have been added at all entryways.

One of the biggest aspects of the project has been a two-story addition with a library on the top floor, a common area on the main floor and a storm shelter, which doubles as a weight room, in the basement. According to Hartnett, “every time you touch a school in Missouri, you have to add a storm shelter.”

State law mandates that shelters be built with new construction or when renovating a school without a shelter. The shelters must be able to hold the entire school population and be strong enough to withstand 250-mile-per-hour winds, which can occur with tornadoes and hurricanes.

With major renovations and construction getting started at the district’s two elementary schools, storm shelters are being planned there as well.

In June, Hartnett said he was breaking ground on the new McGrath Elementary School, which is being built next to the current building. When the new school is finished, the students will move in and the students at Mark Twain Elementary will temporarily move into the old McGrath building while their school is renovated.

When Mark Twain Elementary School is completed, the students will move back and the old McGrath building will be torn down to make way for a new soccer field.

The new McGrath Elementary School will be more modern and ADA accessible compared to the current one, which Hartnett says is difficult to bring into compliance due to its “pod-like” design. The new school will have STEM classrooms, “flexible learning” spaces and handwashing stations in the hallways. It will also contain the Brentwood Early Childhood Center, which is moving from the district’s central administration building. 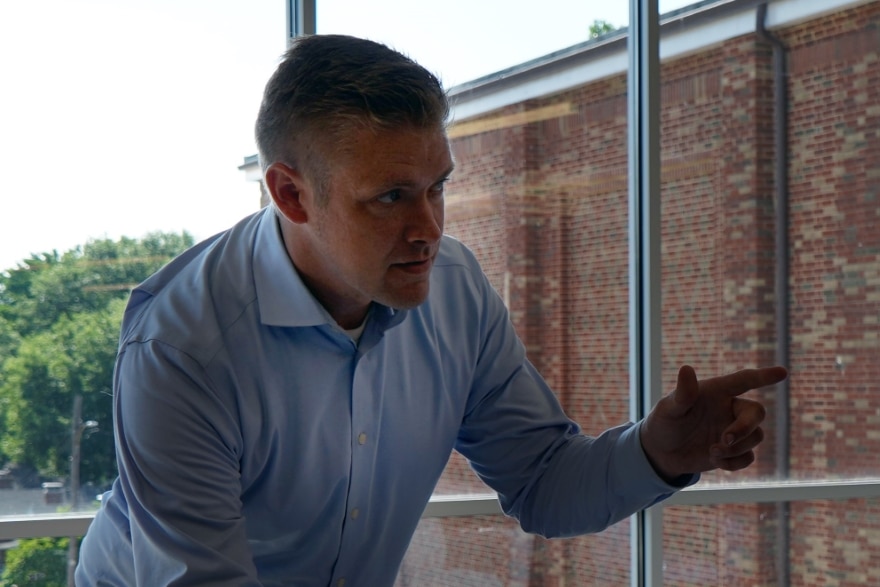 The new building is expected to be completed by December 2022, with the renovated Mark Twain Elementary School expected to be done in June 2024. The latter, which was built in 1934 as a public works project under the New Deal, will be modernized while still “maintaining its historic features and classic look,” Hartnett says. The designs aren’t yet complete, but ADA accessibility will be a focus.

The $29 million projects were approved in June 2020, with Hartnett participating in dozens of community meetings prior to the vote and in the year since. While he’s been enmeshed in the community most of his life, he says the meetings have helped to grasp the needs of parents, teachers and students.

“I care about making these schools as safe as possible and giving students what they need to do well,” Hartnett says. “I don’t come here just to go to work. It’s about so much more than that.”

Hartnett says it can be easy for custodians or maintenance workers to go unnoticed, but as someone who developed a passion for construction and facilities as teenager, he knows some students look to them and envision a similar future.

“It’s important to me that we set a good example for students,” Hartnett says. “Learning extends beyond the classroom.” 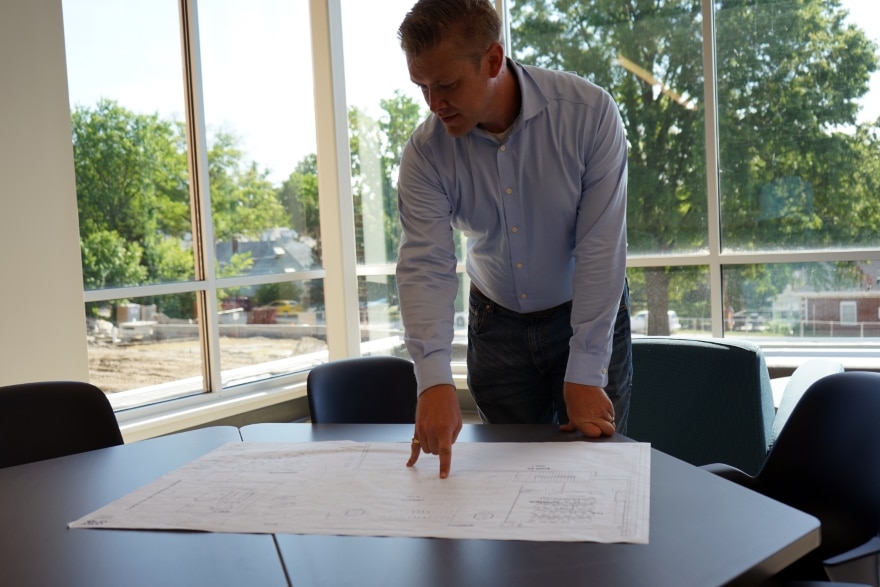 He started in the field before he even graduated high school, getting his first job in facilities at 15 years old. After college he spent eight years at the Lawrence Group, a construction firm in St. Louis, and then briefly worked in facilities at a charter school. When the opening at Brentwood School District popped up, Hartnett says several people emailed him the listing.

While he’s loved being back, there have been some “interesting dynamics” to navigate, including having former teachers as colleagues. He says it’s been fun forming new relationships with them and getting to know them as people, not teachers. Retired maintenance workers and custodians he knew as a student have also come back to say hello. 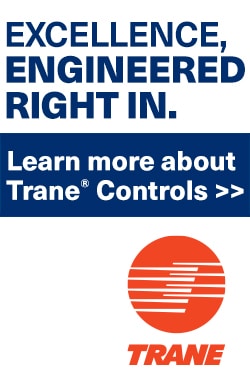