An arborist at heart and a campus facilities director by profession, Andrew Freeman finds the two endeavors complementary in his role at Ohio University Zanesville and Zane State College.

“Trees enhance the campus environment,” he emphasizes during a December interview with Blueprint. “Sometimes, however, they have to be relocated, and that has been an ongoing operation since this past fall.” 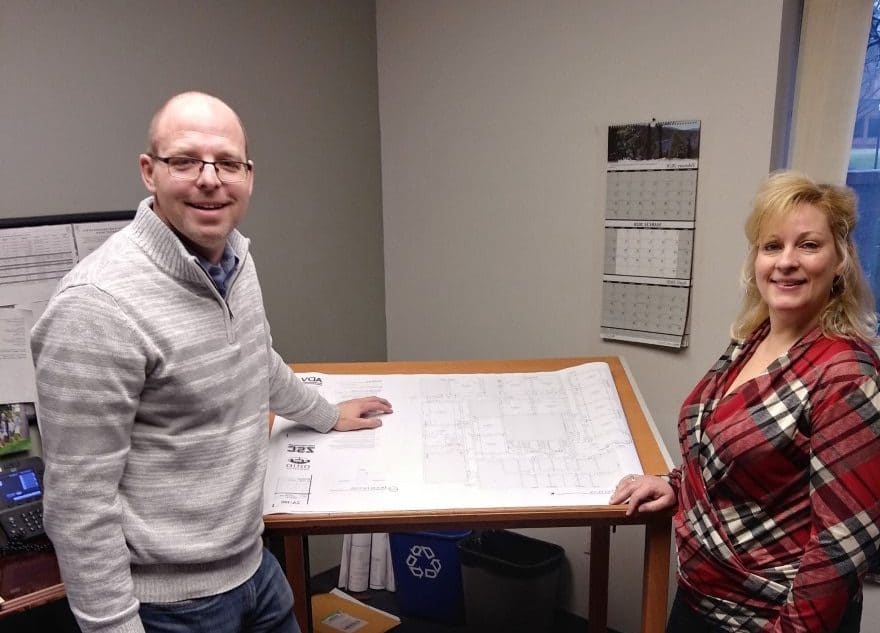 Freeman’s next patient might be the most majestic sugar maple tree he’s ever transplanted. This tree is 19 inches in diameter, over 30 feet tall and wide, and currently located too close to an administrative building. This winter it will be relocated to a more open, desirable space on campus.

“Moving and preserving large trees is an art I’ve acquired and passed down,” the friendly and passionate Freeman says. “It’s a part of grounds maintenance and I love teaching it.”

The Midwest’s cold spell shouldn’t be much of a hindrance, he says, explaining that maple trees are more hardy than other species and can be moved at any time, with the exception of the summer. Freeman has a grounds team of three which has become very proficient using an air spade, which excavates the soil using highly pressurized compressed air, pulverizing the soil and not the roots.

This method is less invasive and the tree will adapt to its new location at a faster rate. After the tree is transplanted, it is cabled and monitored on a regular basis, and Freeman says it should take well to its new home, further befitting Ohio University Zanesville’s and Zane State College’s good standing as Tree Campus USA schools.

Root of the matter

It is a real honor to get the Tree Campus USA designation, Freeman acknowledges, shared by at last count 237 colleges and universities nationwide. Freeman believes in the Arbor Day Foundation’s mission “to inspire people to plant, nurture and celebrate trees.” 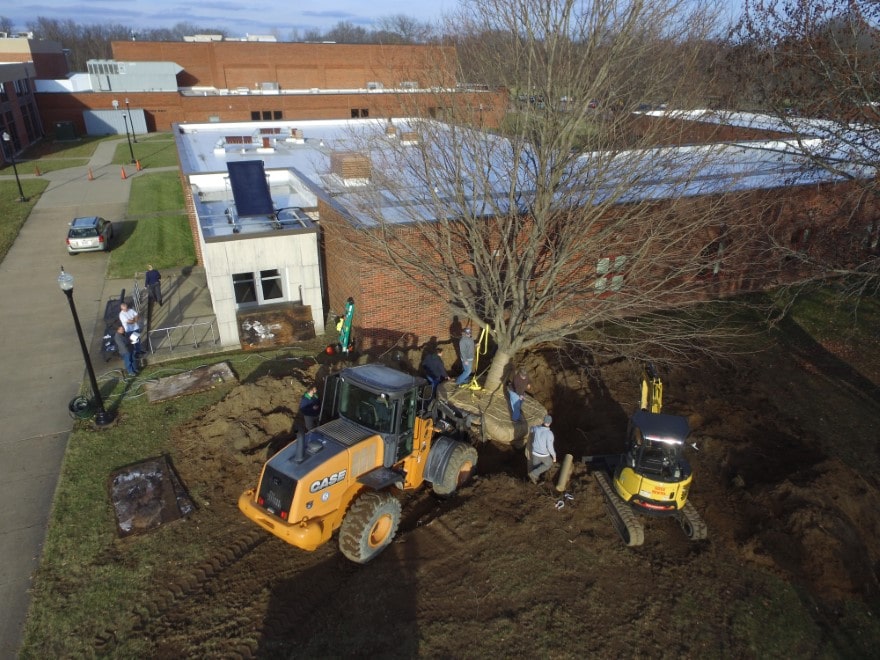 Ohio having the most Tree Campus USA designations of Colleges and Universities in the nation, Freeman feels very much at home in Zanesville, where his duties spread to Zane State College, a two-year technical college, located on the same campus as Ohio University Zanesville. Zane State College also has another satellite campus in Cambridge, 30 miles to the east of Zanesville.

Told that he sounds somewhat like Johnny Appleseed, Freeman takes it as a compliment.

Those students also needing classrooms and laboratories, Freeman’s responsibilities have to cover much more than just grounds. Ohio University Zanesville being mostly a commuter school and Zane State College being a two-year institution, both have endured lean funding and deferred maintenance, that often has Freeman more focused on renovations rather than capital projects.

“It’s not so much about bringing buildings up to code as it is bringing them up to modern times,” he says.

The first semester of the 2019-2020 academic year ended with three Ohio University Zanesville and Zane State College buildings from the ‘60s and ‘70s in various stages of modernization. Today’s trends including online education, Freeman has overseen the phasing away of overhead projectors, replaced by smart boards and white boards, as well as power sources for mobile communications.

But there’s also need for collaborative space that’s so much of the contemporary college experience. And for energy-efficient utilities as well as just making buildings presentable.

Largely through self-education, Freeman says he’s learned a lot about procurement protocol—most advisable for anyone in his position since internal policies and state politics can delay funding. An assistant director’s position having been abolished prior to his arrival, the burden is on Freeman to make a case for new projects.

Being data-oriented has enabled Freeman to find ways to justify projects through such means as Smartsheet, a cloud-based platform that’s a favorite of many institutions for tracking project process, managing calendars and sharing documents. 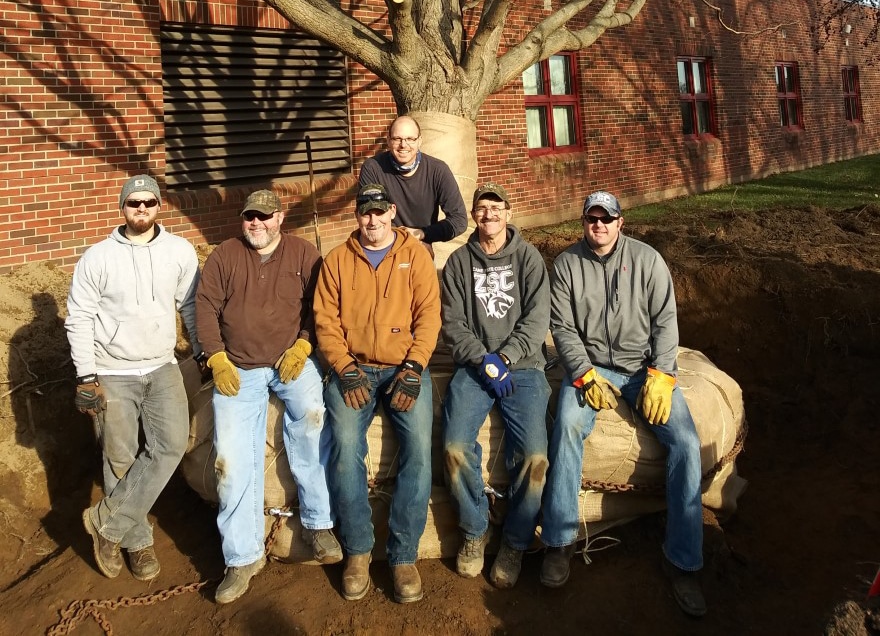 “It keeps things from getting lost in the mix, especially when there’s $100,000 worth of projects pending,” he says. “I may have to make sure money is delegated based on the age of equipment and other factors.”

He received the go-ahead to hire a student resource officer, a deputy from the local sheriff’s office. The SRO helps add another layer to enhance campus safety.

“Trust, but verify,” is Freeman’s modus operandi. He eschews micromanagement, but likes meeting one-on-one with those under his wing.

And you’ll often find Freeman aiding them in the trenches, assessing trees on campus and training the grounds crew on tree transplanting. Such chores keep him grounded, and that’s where he likes to be—his Penn State University credentials being in landscape architecture and construction, and horticulture.

He’d work for multiple landscaping companies from 1997 to 2008, when Freeman would begin a five-year run teaching the subject at Eastland-Fairfield Career and Technical Schools and Hocking College. Freeman then transitioned from teaching and moved into the role of handling the landscaping and facilities management duties at Hocking College until 2018, when he came to Ohio University Zanesville.

Much as he seems wedded to the land, Freeman still relishes the facilities management role and its opportunities for leadership and making a difference. But always eager to get dirt on his hands, he opened AOK Landscape Group last March in nearby Lancaster, Ohio.

If that doesn’t keep him close enough to nature, you’re likely to find the 46-year-old Freeman putting his green thumb to use in his own garden or just spending time with Amy, his wife of 23 years, and their three children: 16-year-old Aubrey, 14-year-old Avery and 11-year-old Abigail.

So all names beginning with “A”? Couldn’t be by coincidence he is asked.

“It’s on purpose. We also have a dog, Auggie,” he says with a laugh.

There’s just something about being outdoors, Freeman believes. It’s God’s creation, Freeman says, and he takes his faith seriously, his extracurricular activities including the men’s ministry at church.

“I love the outdoors and I am a people person,” Freeman says. “It’s where God has me in His plan.”

Like the proverbial tree planted by the water, he shall not be moved. But he’ll move one if a better locale beckons. 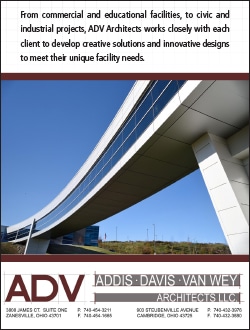 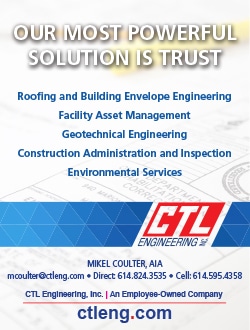